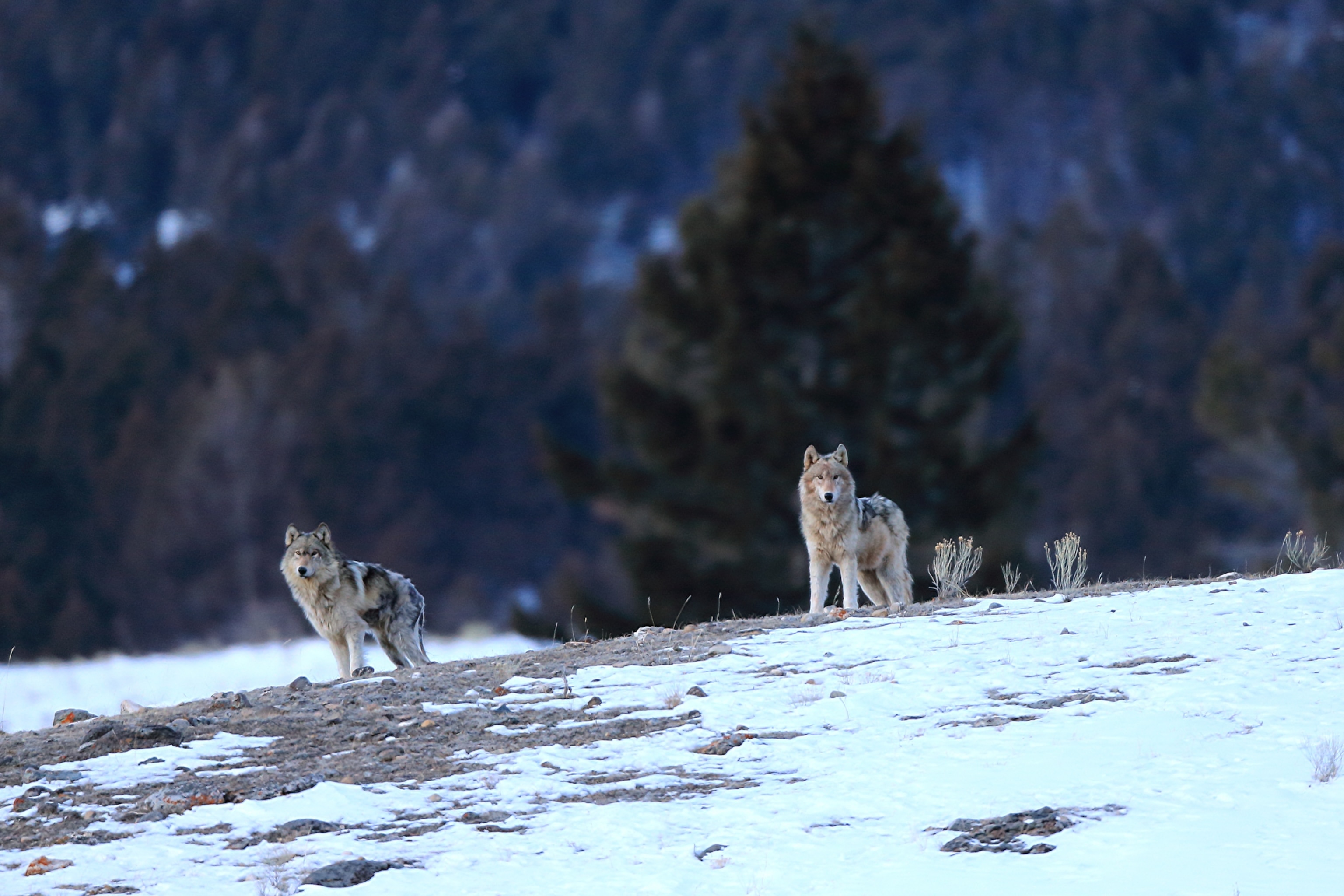 Montana has made killing wolves easier. Some hunters are pushing back.

The state has long been championed as a leader in conservation, but many hunters say a raft of new laws push ethical boundaries.

Two gray wolves stand on a snowy landscape in Yellowstone National Park, in Montana. Wolves in the contiguous United States were nearly wiped out by the turn of the 20th century, and Montana's population was listed The state's population was listed as endangered until 2011. Now, new laws in the state make it easier for hunters and trappers to kill them.
Photograph by Robbie George, Nat Geo Image Collection

Montana is making it easier to kill wildlife in the state, with a suite of bills and new laws that threatens to undermine 30 years of wolf recovery and establish new hunting standards that even many hunters say is too permissive.

New laws would allow the state to permit hunters to kill an unlimited number of wolves, to bait them and hunt them at night, and to set neck snare traps; and will expand the wolf trapping season by 30 days and allow hound hunting of black bears. One law incentivizes trapping by allowing sportsmen’s organizations to pay bounties to hunters who kill wolves—a practice that critics note harkens back to the late 19th and early 20th centuries, when the draw of government bounties drove hunters to exterminate the animals from the state.

All of the bills have been passed by Montana’s state legislature, with particular support from two factions: agricultural groups concerned about wolf attacks on livestock, and hunters and trappers convinced that wolves drive down elk numbers. Some of the bills already have been signed into law by Governor Greg Gianforte while others await his signature. (In April, Gianforte violated state regulations by trapping a Yellowstone wolf without completing required training.)

The loosening of hunting restrictions—particularly for predators such as wolves—has many long-time hunters in Montana concerned that the action crosses a line from ethical, conservation-minded hunting to indiscriminate killing. Montana had about 60 wolves in the state in the 1990s. Today, its wolf numbers are up to an estimated 800 to 1,200, thanks to what has been hailed as “one of the most successful reintroductions in U.S. history, from a conservation standpoint,” says Nick Gevock, conservation director at Montana Wildlife Federation.

Montana’s legislative push is part of a slew of actions against wolves throughout the western United States, following the Trump Administration’s decision to take the Great Lakes region’s wolves off the endangered species list in October 2020. (Montana’s gray wolf population was taken off the list in 2011.) In Idaho, the governor just signed a law that allows the killing of 90 percent of the state’s wolves. And in Wisconsin, over three days in late February, hunters killed 216 wolves—20 percent of the state’s wolf population and far above the state’s quota of 119, outraging conservationists and many proponents of ethical hunting. A group of hunters in Wisconsin have formed a coalition called Hunters for Wolves, which opposes wolf hunting, arguing that what’s happening in Wisconsin violates basic tenants of conservation.

Well-regulated hunting can be an effective and responsible wildlife management tool, meant to control the numbers of certain species and their distributions to ensure a balanced ecosystem,says Gevock, a lifelong hunter. “But it’s not meant to drive animals down to bare minimum number.”

Hunting is considered an integral part of Montana’s cultural heritage. The state has long been known for its collaborative conservation efforts with hunters, trappers, and anglers, whose license fees and gun taxes cover some 85 percent of the budget of the Montana Fish, Wildlife and Parks (FWP) department—including conservation initiatives. But now, Gevock says, “What’s going on here is really giving Montana a black eye.”

Rod Bullis, a third-generation Montana hunter, agrees, calling it “an unprecedented war on wildlife.” He continues: “People would say, ‘Wow, you’re from Montana!’ Now, I’ve had people from around the country calling me and saying, ‘What the hell are you guys doing in Montana to your wildlife?’” he says. “I can’t answer it.”

An unraveling of regulations

Wolves are resilient, Gevock and others say, so it’s unclear how the loosening of restrictions will affect their numbers in Montana. But “it’s playing with fire and leaving very little safety net,” says Jenny Sherry, a wildlife advocate at the Natural Resources Defense Council (NRDC), based in Bozeman, Montana. “It’s really reckless management of an animal that doesn’t have a high population level to begin with in the state.”

After Montana’s wolves were declared recovered in 2011, the state allowed wolf hunting to start up again. In the 2020-2021 season, which ended on March 15, hunters killed about 35 percent of the state’s wolves, or 327.

The new law that allows unlimited wolf kills, and is likely to go into effect later this year, requires only that enough wolves remain in the state to support at least 15 breeding pairs (defined as a male, female, and two pups).

Supporters of the recent legislation include many in the trapping and outfitting community, including Mac Minard, executive director of the Montana Outfitters and Guides Association; they argue that the measures are necessary to keep the wolf population under control, in part because they’re depleting elk populations—key big game in the state. “We can’t sit by and allow our game, the thing that feeds so many families, to be taken off the table,” Bob Brown, a state senator and sponsor of some of the wolf bills, said during a legislative hearing in March.

But that notion is disputed. “There is no data to back up that elk populations are affected by wolves,” Gevock says. Greg Lemon, spokesperson at the Montana FWP, says that “by and large, elk populations are robust” in Montana, though in some parts of the state, particularly in the northwest, elk numbers are below objective. However, Lemon says, the “reasons are varied.” Predators may play a role, but so may habitat and hunting pressures.

Under pending legislation and new laws in Montana, the ways in which wolves can be killed are equally as controversial as the number of wolves that would be allowed to be hunted. Some hunters say that many of the newly allowed hunting and trapping methods violate the concept of fair chase, the idea that an animal should have a reasonable chance to get away and that the hunter doesn’t have an unfair advantage.

“When you talk about night hunting, open baiting, having multiple kills on a single license, it’s like there’s no respect for the animal,” Bullis says. “To me, you have to have respect. Every time I get an elk, I say a prayer. I share it with my family. I’m thankful.”

Minard, on the other hand, says that what constitutes ethical hunting or trapping is subjective, “subject to a broad range of interpretation of value judgments.”

The Boone and Crockett Club, an organization that advocates for fair chase hunting, does not consider the use of snare traps to fall under the umbrella of fair chase, for example, says Justin Spring, director of big game records at the organization. Wildlife advocates view snares as fundamentally inhumane because it can take hours or even days for wolves to die “a slow, agonizing death,” says Stephen Capra, director of Footloose Montana, a nonprofit organization that seeks to end trapping in the state. “It’s nothing but indiscriminate killing,” he says, noting that snares have been documented to capture and kill non-target species including mountain lions and pet dogs.

Minard, who says he has killed about 60 wolves throughout his trapping career and sometimes uses snare traps, says it’s up to individual trappers to operate snares responsibly. He says there are methods to minimize trapping non-target species.

Capra says he also worries about how many wolves snares could kill—snares are inexpensive, so a person could easily buy and set a hundred of them, he says.

But to proponents, that’s exactly the point. Montana State Representative Paul Fielder, a sponsor of the snaring bill, said at a legislative hearing in February that “allowing the snaring of wolves in Montana by licensed trappers will give wildlife managers another tool to reduce wolf numbers.”

In a March 16 letter to lawmakers, 49 Montana wildlife biologists and managers condemned the bills, saying they’re based in “misinformation about wildlife” and are “harmful to wildlife and the hunting heritage of Montana.” The 49 signers included three former commissioners of the Montana Fish and Wildlife Commission, FWP’s decision-making body.

Nonetheless, FWP now must draw up proposals as to how the new laws will be interpreted and implemented. The department doesn’t “have a choice to ignore laws enacted,” says spokesperson Lemon. “The department’s role is to determine how to implement the law now that it’s passed.” The agency will make recommendations in the next few months, and those recommendations will be open to public comment.

The new laws will likely be in effect for hunting season next year. Contemplating that, Bullis says, “I don’t want to kill off everything—and I don’t want to be viewed as someone who doesn’t do things with integrity and respect for animals. This war on wolves has started a fight amongst hunters that we don’t need to have,” he concludes. “I have to go testify when I could be out in the woods.”

Editor's Note: This story was updated on May 14, 2021 to clarify that the new legislation gives FWP permission to authorize the use of wolf baiting, night hunting, and unlimited kills.