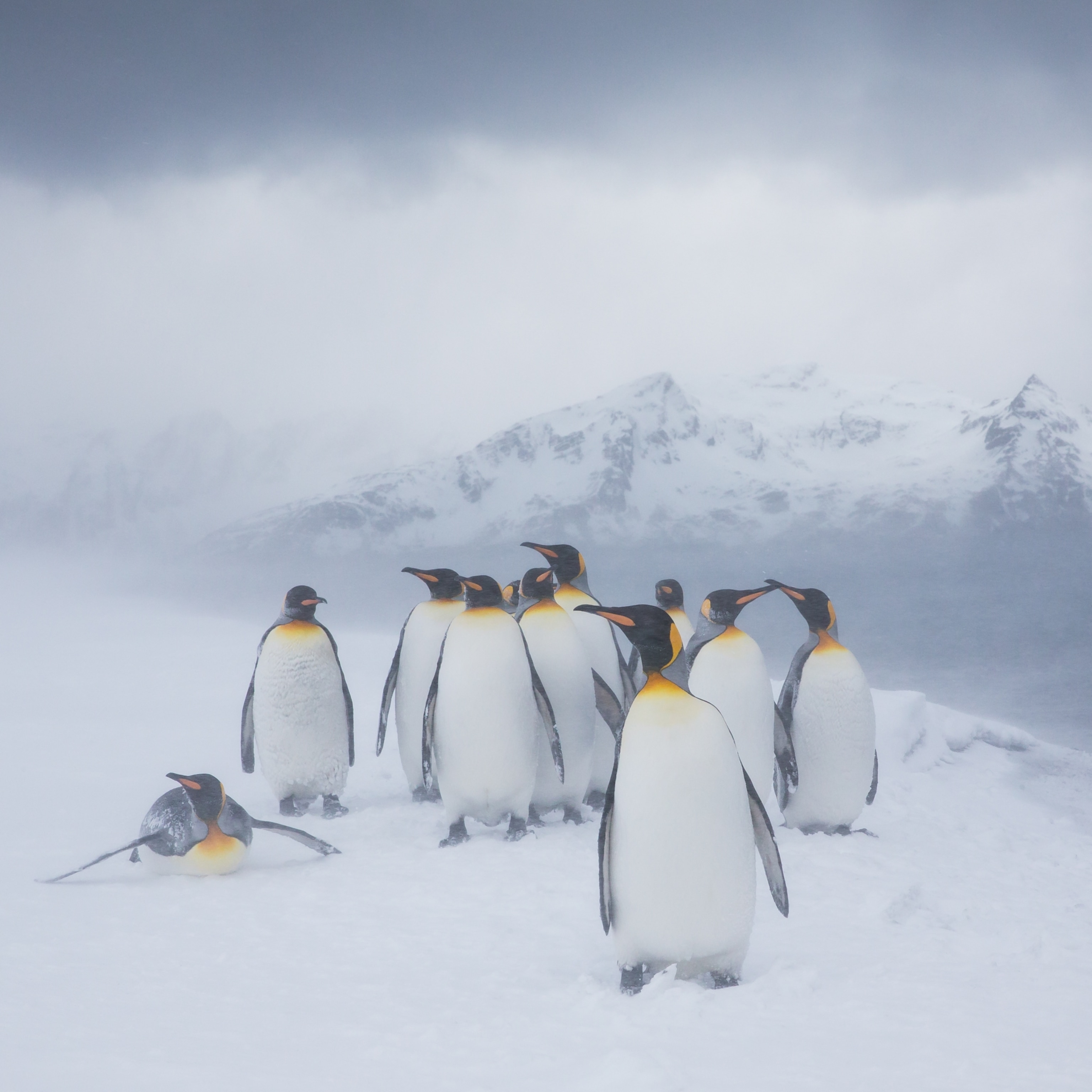 Yellow penguin spotted in Antarctica—here's why it's so rare

The king penguin was spotted on the island of South Georgia, where the species gathers in the tens of thousands.

A group of king penguins huddle together in a blizzard on the island of South Georgia.
Photograph by Klein & Hubert, Nature Picture Library

On an expedition to the South Atlantic in 2019, Belgian photographer Yves Adams expected a familiar sight: king penguins, easily identified by the black and yellow feathers adorning their heads and necks, and the orange flash of color running the length of their beaks.

Instead, Adams saw something electrifying: a vivid yellow penguin.

On the shore known as Salisbury Plains on South Georgia Island, as many as 120,000 king penguins have been observed milling about, in a veritable sea of black feathers.

But the animal Adams saw stood out from the rest: A bird with an ivory-white bill, a cream-colored body, and a mane of lemon-hued feathers. Adams was offloading equipment from the expedition ship when he saw the unique bird amid a group of other penguins. He dropped everything and grabbed his camera. (See more pictures of the yellow penguin on Adams' Instagram.)

"To our surprise they swam towards us,” Adams recounted in an email. “So for a few minutes we were very lucky, and I was so happy I got these good photo conditions!”

During the two-month expedition, Adams took thousands of photos. It wasn’t until recently that he finally went through each one and edited the special photos, which have since gone viral.

In some cases when an individual animal’s coloring diverges sharply from the species’ typical coloration, it’s an example of albinism. In this case, penguin expert P. Dee Boersma says the proper term for the yellow-maned bird is leucism, a genetic mutation in which an animal is mostly white but can produce some pigment. (See a picture of a “blonde” chinstrap penguin.)

“How they lack pigment kind of differs between individuals but, in general, it looks like they've been dipped in bleach,” says Boersma, a conservation biologist at the University of Washington and a National Geographic Explorer.

Bird of a different color

Daniel Thomas, an ornithologist and expert in penguin pigments at Massey University of New Zealand, points to the dark border between the yellow and white feathers, as well as the beige feathers on the penguin's back, as evidence that the bird is still perhaps producing some types of melanin, a brown or black pigment.

Thomas agrees with other experts that "feather samples for biochemical testing would be needed to document if melanin is present."

In 38 years of studying penguins, Boersma figures she could count on two hands the number of leucistic animals she’s seen. And though she’s never personally seen a leucistic king penguin, she’s not surprised they’re out there.

There have been numerous reported observations of leucistic king, rockhopper, and macaroni penguins. In 2019, a king penguin with a brown genetic mutation, which turned its gray feathers tan, was spotted in South Georgia. (Read more about king penguins, one of the tallest species.)

Rare but not unique

It’s not possible to tell if the yellow penguin is a male or a female just by looking at it, Adams says. But discoloration can be a problem for male Magellanic penguins, a species Boersma studies, when it comes time to find a mate.

“If you're a female, you'll be fine, because there's about three males to every female,” she says—but males that look different don’t stand much chance of mating. As a result the leucistic trait only has an opportunity to get passed on roughly half the time. (See pictures of albino and leucistic animals, from squirrels to crayfish.)

The king penguin population is increasing, and the International Union for Conservation of Nature lists them as “of least concern.”

But generally, when uncommon colorations do get passed on, they can endanger the individuals and further increase their rarity.

When penguins have more pigment in their feathers than normal—a condition called melanism—it gives them a darker color overall. These darker animals may be more visible than other penguins in the water, and have a harder time sneaking up on fish.

And paler penguins are more likely to be eaten by leopard seals or killer whales in the Antarctic, she says.

So “you're not going to get a chance to see very many,” Boersma says—a fact that makes Adams’ sighting all the more amazing.