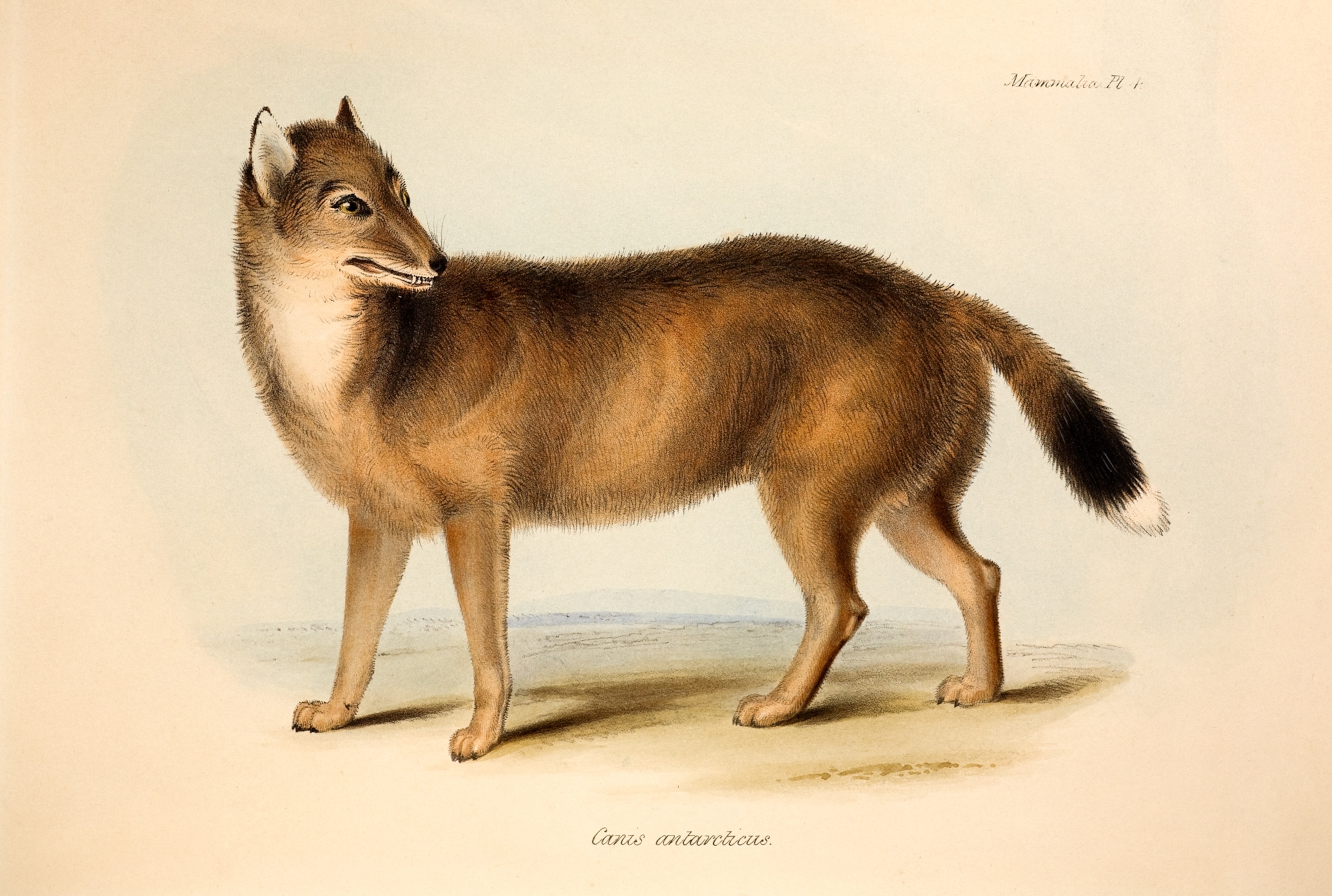 New clues may explain the mysterious origins of the Falklands wolf

Charcoal, bones, and tools suggest Indigenous seafarers inhabited the Falklands. It’s possible they may have brought their canine companions along.

When Charles Darwin arrived at the Falkland Islands in 1833, the lone mammal he saw wandering its desolate shores was an odd fox-like creature.

Darwin and other European settlers assumed that the Falklands, also known as Islas Malvinas and located several hundred miles east of the Argentina coastline, were uninhabited. There were no settlements and no people who could have ferried the enigmatic Falkland fox, also called the warrah, to this cold, scrubby archipelago.

The warrah, they decided, must have made its own way across the sea. Scientists later hypothesized the foxes could have made it there by rafting on debris or hopping across ice floes during the last Ice Age.

But a new study, published in Science Advances on October 27, combines archaeology and ecology to suggest humans may have inhabited these islands before Europeans, and perhaps brought their canine companions as well. The paper opens new possibilities for the history of the Falklands, a rugged and still disputed land, and could help us better understand this mysterious member of the dog family.

We barely knew the warrah, also known as the Falkland Islands wolf (Dusicyon australis). In 1876 it went extinct due to hunting—the first canid to fade away from overhunting in modern history. Today, only about a dozen specimens exist in museums and collections globally, according to University of Chicago evolutionary biologist Graham Slater, who has studied the warrah but was not involved in the new study.

The creature, neither a wolf nor a fox, looked “very much like a coyote or a jackal,” Slater says. Perhaps like modern coyotes, too, it had a reputation for being a little sly, in addition to friendly; Darwin’s account notes that a warrah once nabbed some meat from underneath a sleeping mariner’s head.

Genetic evidence pulled from ancient mitochondria also suggests that the warrah had become isolated from its nearest relatives around 16,000 years ago—perhaps after they made it on their own to the Falklands.

But there are potential problems with the idea that the warrah made it to the Falklands without human help. There’s not much geologic evidence of an ice or land bridge to the archipelago, for example. There’s also the lack of other mammals on the islands—it’s unusual for only one species to make such a leap by itself—although the “highly opportunistic” warrah could have had a chance, according to Slater.

Now, new lines of evidence gleaned from the beaches and wetlands of the Falklands are prompting scientists to examine the possibility that early seafarers brought the warrah. Kit Hamley, a paleoecologist and archaeologist at the University of Maine and lead author of the study, and colleagues found an increase in charcoal preserved in peat from Falkland bogs starting around 1800 B.C., followed by an even more dramatic rise around 550 B.C.

“When people first arrive on an island ecosystem, fire frequency and intensity dramatically increased,” she says. “So just seeing those peaks [in the charcoal record] was a heart-pounding moment.”

The charcoal record suggests that people could have used the islands multiple times, long before the Europeans arrived.

The researchers also found a larger than previously known abundance of bone piles scattered around the islands. The combination of seals and penguins—predators and prey—along with a lack of stomach contents signaled to Hamley that these piles were not natural death assemblages, but could have been discarded remains of animals eaten by pre-European visitors. Some of the piles were in the same spot where an enigmatic stone arrowhead, made long ago using local quartzite, was found on the Falklands in 1979.

To Slater, the paper “does open the door to revisiting this Indigenous transportation idea.”

That arrowhead may have been used by the seafaring Yaghan people, indigenous to the Tierra del Fuego region of Argentina and Chile. Researchers also examined large piles of bones scattered around the islands and found that they are mostly rockhopper penguins and southern sea lions—animals that were key food for the Yaghan.

There is archaeological evidence for close relationships between humans and wild canids in mainland Tierra del Fuego over 2,000 years ago. "The warrah's mainland relative shows up in mortuary sites in Argentina dating back to more than 2,000 years ago, which gives credence to the idea that foxes had integrated into society beyond that of a peripheral camp scavenger,” Hamley says.

Isotopic analyses in the paper showed that the warrah’s diet, dominated by large marine mammals, was also likely similar to humans’. The researchers suggest it is unlikely the warrah would have naturally preyed upon such animals; instead, it seems plausible that they were fed by their Yaghan companions.

The new evidence points to temporary inhabitation of the Falklands, rather than permanent settlements, Hamley argues. That lines up with what is known about the Yaghan: a society of skilled marine hunter-gatherers and canoe-builders who were highly mobile throughout Tierra del Fuego for at least 8,000 years, and continue to live there today even as the Falklands’ territory is disputed. (The islands are a United Kingdom overseas territory, and most residents have supported this in recent polls, but Argentina also claims sovereignty to the archipelago.)

To search for signs of pre-settler activity, Hamley looked for gently sloping beaches and fresh water and picked three islands to study: Bleaker Island, on the eastern edge of the archipelago; New Island, on the west; and a distant site called Mount Usborne, to use as a control. New Island, she reasoned, “would have been one of the first islands you would encounter if you were coming from South America.”

The researchers found a notable increase in charcoal on New Island, but not Mount Usborne. Radio-carbon dating of the warrah remains also show the animals were present at the same as the charcoal was deposited.

“Our interpretation of the New Island site in particular is that there's very, very strong paleoecological and archaeological evidence that humans had utilized New Island prior to European arrival,” Hamley says, even if their stays were not long.

For Slater, the paper’s paleoecological support for human activity is solid.

“This paper is the first, as far as I’m aware, to try to place archaeological evidence—stone tips and middens (bone piles)—in a greater context,” Slater says. “I think they have a strong case for Indigenous occupation prior to European colonization in the 17th century.”

But Atilio Francisco Javier Zangrando, an archaeologist and paleocologist at Centro Austral de Investigaciones Científicas who was not involved in the study, questioned why people would have traveled to the Falklands, hundreds of miles from the mainland.

“It would have taken several weeks to travel by sea,” Zangrando says, making it a difficult journey, physically and logistically. “What about bringing that much water?” And, because the Yaghan brought their fire with them, they would have needed to bring fuel as well, or a way to keep burning embers safe.

Zangrando accepted the charcoal record as indirect evidence of human activity, but not necessarily from early Yaghan habitation; it could have been European settlers during the 17th century. Both he and Slater thought warrahs could have eaten marine mammals without human help or arrived there on their own.

Hamley plans to head back to the islands soon to look for more signs of ancient humans—and warrahs.