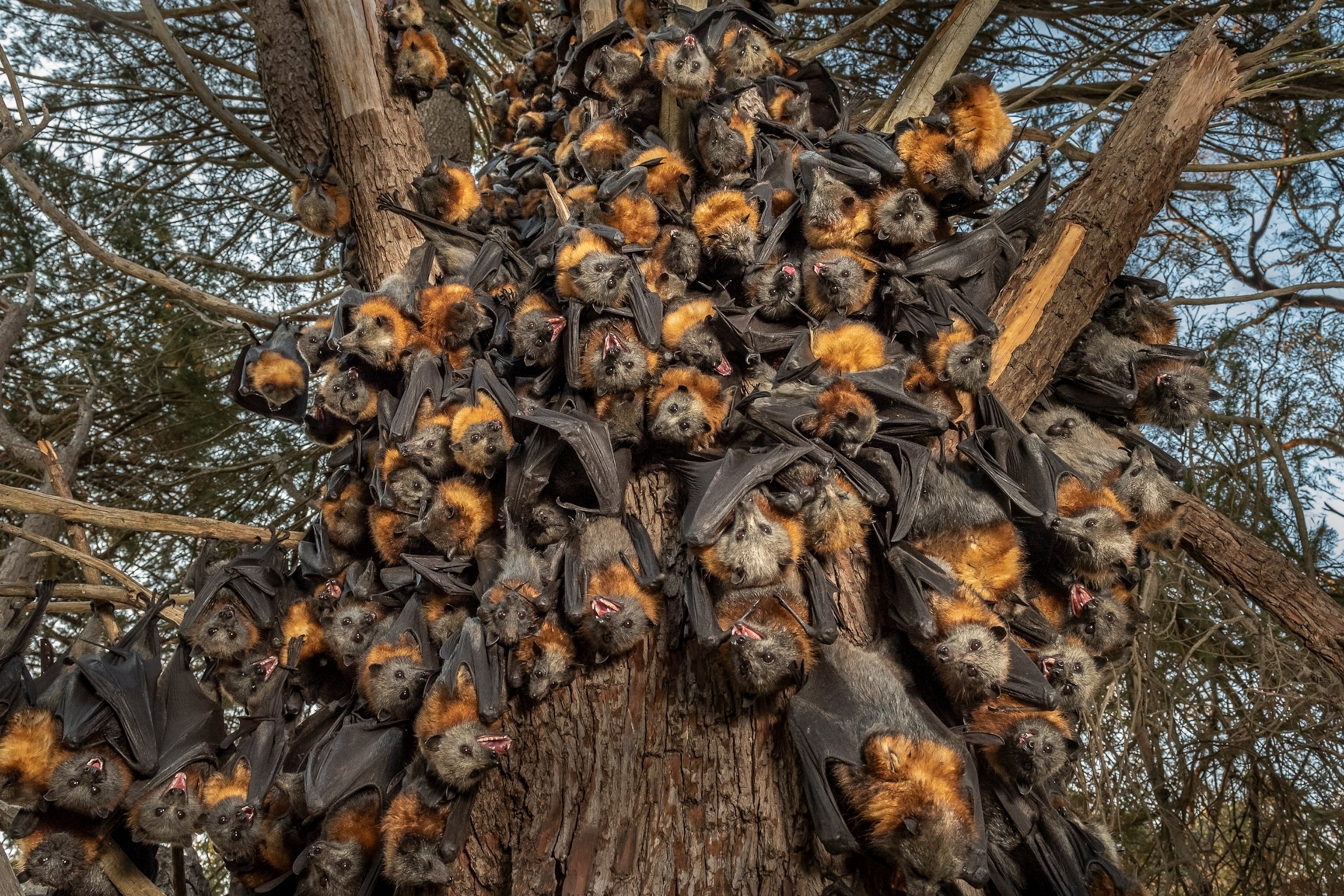 In three days before Christmas, thousands of the mammals died in 110-degree heat in one Melbourne park.

Dozens of panting, suffocating gray-headed flying foxes clump together in an attempt to survive 110-degree heat in Yarra Bend Park, outside of Melbourne, in late December. Some 4,500 foxes, including many of these seen here, died over three days in the park.

Photograph by Doug Gimesy
Editor's note: Experts say that anyone handling bats should be vaccinated against rabies and strongly suggest wearing gloves. Humans can contract Australian bat lyssavirus, a potentially lethal type of rabies, through bat bites and scratches.

The 30,000 gray-headed flying foxes in Yarra Bend Park, just outside the heart of Melbourne, Australia, were having a fairly normal early spring.

In September and October—springtime in Australia and prime birthing season for the 11-inch long megabats—many of the flying foxes had returned to the park from their winter migration up the coast. Females were birthing pups as normal, says biologist Stephen Brend, who is in charge of monitoring gray-headed flying foxes in Victoria province, including at Yarra Bend Park, which is home to a significant colony of the bats. All was routine.

“And then the horror started,” Brend says. “It got too hot, too quickly.”

Incapable of surviving the extreme, relentless heat that gripped Melbourne in December, the flying foxes were dying. Across three days just before Christmas, when temperatues exceeded 110 degrees Fahrenehit, 4,500 of the park’s gray-headed flying foxes perished—15 percent of the colony’s population.

The tragedy for flying foxes in the park echoes scenes of wildlife suffering across the country and puts a spotlight on the perils of extreme heat, which for some species can be just as deadly as fire. Great and small, fast and slow, Australia’s endemic animals are falling victim to the heatwaves and fires that are ravaging the country at an unprecedented scale. It’s the hottest and driest summer in Australia in recorded history. As the planet warms, large-scale fires are becoming more frequent, and bushfire seasons are getting longer.

For gray-headed flying foxes, which are classified as vulnerable to extinction by the International Union for the Conservation of Nature, the Yarra Bend event is not isolated. “The colony in Adelaide suffered even worse,” says Brend. Several thousand flying fox babies died there from extreme heat between November and January, says Justin Welbergen, associate professor of animal ecology at Western Sydney University and president of the Australasian Bat Society. On January 4, many thousands of flying fox babies died across multiple roosts in and around the Sydney region in New South Wales, where the temperature reached a record-breaking 121 degrees Fahrenheit. Welbergen’s team, which monitors flying fox heat stress conditions, is calculating a final death toll.

This summer’s extreme heat and extreme fires, which have imperiled Australia’s entire eastern coast—prime flying-fox habitat—“risk wiping out the 2019 generation” of newborn bats, Brend says. Some 80 percent of flying fox pups are born in October. They were young and vulnerable when heat waves and wildfires broke out late last year.

Hour by hour in extreme heat

A day in the life of a flying fox in a heatwave is unforgiving. By 5:30 a.m., as dawn breaks, the bats have returned to their trees after spending the night feeding on nectar and fruit. By 8 a.m., Brend says, it’s getting hot in their roosts. The bats fan their wings to keep cool, but they can only do it for so long before they start to get tired, he says. By noon, they’re getting exhausted, and temperatures continue to climb. The bats start to pant, which accelerates dehydration.

At that point, they could fly into the river to get a drink (the Yarra River runs through the middle of the 640-acre park), “but it’s like us running to the shop in the middle of a heat wave,” Brend says. Flying takes energy, and when they’re exhausted and dehydrated, they’ll simply stay put.

Distressed and starting to panic, the bats try to find a cool spot. Mothers will deposit their babies on branches and separate, Brend says, searching for a tree trunk that might be cooler. The bats follow each other—spotting one on a trunk seems to signal to the rest that it’s a refuge. They start to clump together. “It’s like a football scrum of bats,” Brend says. “To the observer, it looks mindless.” The ones who got there first are now surrounded and smothered by dozens of others.

“At that point in time everything has gone wrong,” Brend says. That’s when his team, made up of park staff and volunteers, will step in to try to break up the clumps by spraying them with water, which cools them down and slakes their thirst.

Tragedy on the trees

On December 20th, at the height of the three-day heat event that killed 4,500 flying foxes, “it never got cool,” Brend says. At 9 p.m., the team was out spraying. But it was pitch black, tree limbs were falling, and there are venomous snakes in the brush. “We had to call it off. We couldn’t see. It was 38 degrees [100 degrees Fahrenheit]. It was deeply distressing,” he says. “It was carnage.”

“One falls, and the rest cascade on the ground, crushing and suffocating each other. Dozens if not hundreds of dead or dying bats are at the bottom of the tree,” says Melbourne-based photojournalist Douglas Gimesy, who documented the December rescue efforts. “You’re looking down at them and they’re looking up at you gasping. They’re smothering and heating up. Volunteers will go in and separate out bodies and find some that are still alive. But you’ve got 20 to 30 rescuers and 4,500 bats. It’s like a war zone. It’s sad and distressing and heartbreaking, and you know it will happen again and again and again.”

“Some we get to in time,” says Tamsyn Hogarth, one of the rescuers. “Others die in your hand.” By the third day, on December 20th, the air was thick with “the smell of death,” she says. Hogarth runs Fly By Night, a wildlife shelter in Melbourne dedicated to rescuing, rehabilitating, and releasing gray-headed flying foxes. She and other volunteers rescued 255 babies during the extreme heat events in December in Yarra Bend Park. Two dozen volunteers across Victoria province are currently caring for the bats, which range in age from two to 12 weeks old.

Heatwave deaths are normal for the bats—but this is different.

Hot days causing bat deaths are normal in Yarra Bend Park. “We’re always worried about heat events. You’re not going to get through summer without having really hot days,” says Brend. Last summer, for example, a few hundred bats died, he says. One study found that between 1994 and 2007, approximately 30,000 gray-headed flying foxes died in extreme heat events in Australia.

But the timing of this year’s extreme heat—right after birthing season—contributed to unusually high mortality. Because the young were still nursing, their mothers’ energy levels were depleted, and all of them—parents and new babies—are more vulnerable, Brend says. The first weekend in December was extremely hot, and it was followed by a succession of hot days all month, culminating in the three-day death event, reaching a peak of 110 degrees Fahrenheit in Yarra Bend on December 20.

A mother gray-headed flying fox hangs from a branch in Yarra Bend Park as her baby clings to her chest. About 80 percent of flying fox pups are born in October. The timing of the extreme heat in December meant that a whole generation of newborn bats, still dependent on their mothers, were hit hard.

This close-up photo shows the fragile, membranous wing of a gray-headed flying fox. The bats will flap their wings, which can span more than three feet wide, in an attempt to cool down. This repeated flapping can lead to exhaustion.

“It’s emotional and frightening for the species. And this is happening across their entire range,” Brend says. While Yarra Bend Park hasn’t been hit by fires, much of the flying foxes' habitat lies directly in the fire zones along Australia’s east coast.

A May 2019 national survey estimated that there are around 589,000 gray-headed flying foxes in Australia. Although their numbers are robust now, they face a host of threats, from routine extreme heat events to entanglement in urban infrastructure, such as nets and barbed wire, as well as harassment from residents who see them as pests.

The bats are nomadic. Much of their range is currently in the fire zones. Many travel north in winter, roosting in forests along the coast, which they may find scorched. The “bushfires have destroyed essential foraging resources on unprecedented scales,” says Welbergen. “There is no refuge for them,” says Brend. “It’s not like it’s bad in Melbourne but will be OK in northern New South Wales—it’s not OK anywhere.”

“That can’t go on for too many cycles before the population declines,” Brend says. “I don’t want to be alarmist or dramatic—there are still thousands of these bats—but there’s no reason to be confident anymore.”

“Our worry is we’ll have the new passenger pigeon,” he says, referring to what was once the most abundant bird in North America before being hunted to extinction in the 19th century.

Flying foxes play a vital role in the forest. “Their ecological role is as big, nocturnal bees,” Brend says. They carry seeds and pollinate trees, gardening the forest by night. “Bats need the forest and the forest needs the bats,” says Brend.

And it’s still the middle of summer in Australia. “We’ll battle on for our upside down friends,” says Lawrence Pope, a rescuer caring for five orphaned baby bats at home, “but things look very grim.”

“In this horror year, all species are suffering. It’s really frightening,” Brend says. “We’re hot, and they’re hot, and it’s a nightmare.”