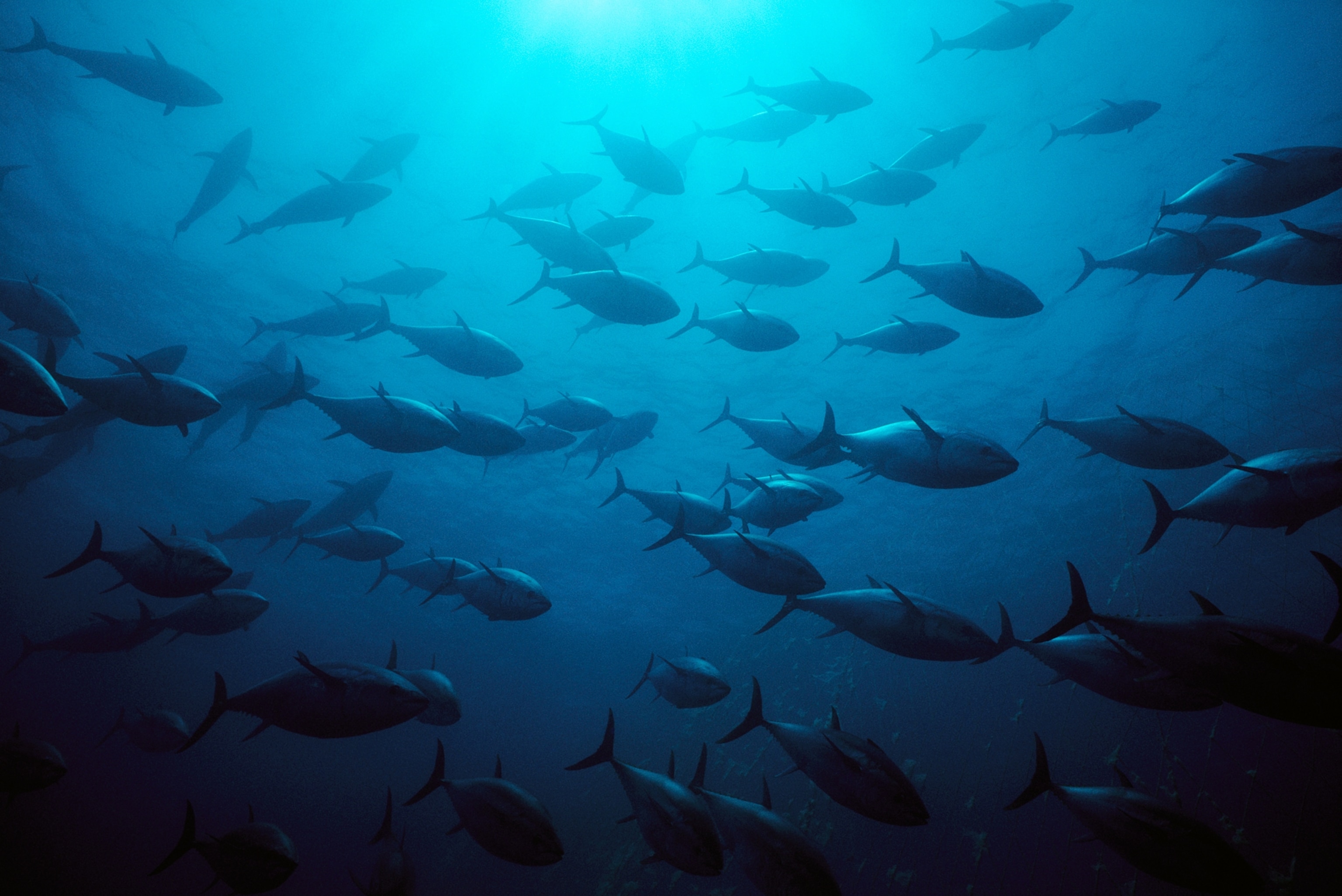 These popular tuna species are no longer endangered, surprising scientists

From fish to Komodo dragons, the International Union for Conservation of Nature has updated its list of the world’s most endangered species.

Atlantic bluefin tuna school in the Mediterranean Sea off Sardinia, Italy. The species has seen an incredible recovery from overfishing.
Photograph by NORBERT WU/ MINDEN PICTURES

In a world simultaneously on fire and underwater thanks to climate change, scientists have announced some good news: Several important tuna species have stepped back from the edge of extinction.

Two bluefin species, a yellowfin, and an albacore are no longer critically endangered or have moved off the leading international list of endangered species entirely.

The unexpectedly fast recovery speaks to the success of efforts over the past decade to end overfishing. But tuna are not the only species scientists are deliberating at the 2021 World Conservation Congress in Marseille, France, which is organized by the International Union for Conservation of Nature (IUCN). Researchers caution that many other marine species remain imperiled For instance, more than a third of the world’s sharks and rays remain threatened with extinction due to overfishing, habitat loss, and climate change.

“I think the good news is that sustainable fisheries are possible,” says Beth Polidoro, a marine biologist at Arizona State University. “We can eat fish sustainably and without depleting the population to the point where it is on the road to collapse or extinction.”

At the same time, she warned that the changes in status should not be an incentive to lift quotas and catch as many fish as we want.

The IUCN, which ranks the world’s most endangered species on its Red List of Threatened Species and is backed by 16,000 experts across the globe, also announced at the meeting that some animals are moving in the other direction, onto the Red List. One notable example is the Komodo dragon, an island-dwelling lizard at particular risk from climate change.

For the better part of two decades, Polidoro has been part of a specialist group tasked with assessing the statuses of more than 60 species of tuna and billfishes for the IUCN. Her team announced its first comprehensive findings in 2011, revealing that a number of commercially fished tuna species were dangerously close to disappearing.

Ten years on, Polidoro says she was surprised to see so much improvement.

According to the new data, the Atlantic bluefin tuna (Thunnus thynnus), once listed as endangered, now qualifies for a status of least concern. As does the yellowfin tuna (Thunnus albacares) and albacore tuna (Thunnus alalunga), which were both considered near-threatened the last time they were assessed. (Here’s how to pick the most environmentally friendly canned tuna.)

Additionally, the southern bluefin tuna (Thunnus maccoyii) has improved from critically endangered to endangered, while bigeye tuna (Thunnus obesus) will remain at a status of vulnerable, and skipjack tuna (Katsuwonus pelamis) maintains its status of least concern.

How science is saving marvels of the sea

Most people think of tuna only as a potential dinner, but these fish are massive, marvelous creatures in their own right.

For instance, an Atlantic bluefin tuna begins its life as an egg no larger than the thickness of a credit card. But within a decade, it can grow to lengths of more than six feet and weights of more than 550 pounds. Tuna are fierce predators that zip through the ocean at speeds approaching 40 miles per hour, and they swallow their prey whole—whatever fits inside their gullet.

Though these animals would dwarf an NFL linebacker, they’re no match for modern fishing techniques. Beginning in the 1970s, longline fishing vessels dragging baited hooks hammered the largest Atlantic bluefin tunas as they gathered in the Gulf of Mexico to breed each year. At the same time, purse seine nets scooped up the smaller juveniles as they fed along North America’s East Coast.

However, reduced catch quotas and enforcement of those quotas helped their comeback, says Polidoro. Improved data have also allowed for more accurate assessments and management decisions, she says.

A few caveats remain. After all, tuna inhabit vast expanses of the world’s oceans and use different regions throughout their life cycles. This makes managing their populations rather complex. (Read more about why the Atlantic bluefin tuna has been drastically overfished.)

“Yellowfin tuna in the Indian Ocean is somewhat of a big black hole,” says Polidoro. “We’re not really sure what the status of the species is there, but it appears to be overfished.”

Likewise, the western Atlantic population of the Atlantic bluefin tuna has been severely depleted since the 1970s and has yet to fully recover, she says.

Another significant development to come out of the World Conservation Congress is a change in the status of Komodo dragons (Varanus komodoensis). But this shift is less encouraging than for tuna.

As inhabitants of Indonesia’s Sunda Islands, the world’s largest lizards could see as much as 30 percent of their habitat affected by rising sea levels over the next 45 years, and this has prompted scientists to change the reptile’s status from vulnerable to endangered. (Learn more about Komodo dragons and where to find them.)

Watch how scientists are breeding komodo dragons in captivity

“If we talk about climate change and sea level rise, I think most of the species that live in small islands will face the same problem,” says Achmad Ariefiandy, an ecologist with an Indonesian nonprofit called the Komodo Survival Program, in an email. Ariefiandy was not involved with the listing decision.

Despite the looming existential threat, Komodo dragons may be better off than other species in the endangered category. The Indonesian government has committed to saving the dragons, with a program that kicked off in earnest in 2013, says Ariefiandy. This includes partnerships between regional and local governments, as well as with local communities, academics, and nongovernmental organizations, he says.

“So the reality in the field at the moment [is that] they are actually doing just fine,” says Ariefiandy.

Of course, the work of conservation is never over, and it will require vigilance to ensure neither tuna nor Komodo dragons slip back toward the brink. But for now, conservationists can celebrate a few wins for the animal world.