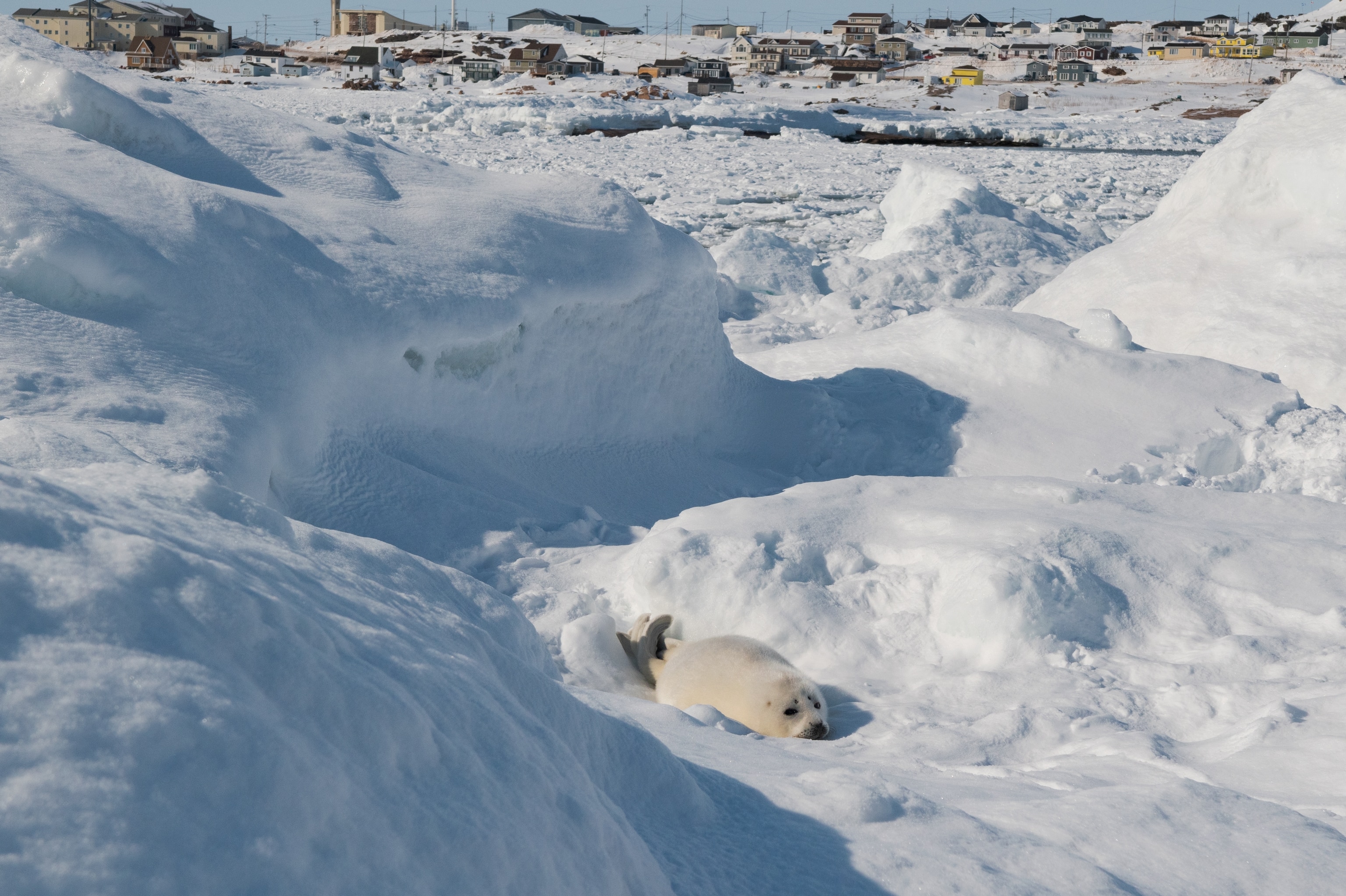 Their unprecedented appearance on land is a sign of the drastic impact of climate change on northern sea ice and wildlife.

A harp seal pup sits on a snow-covered beach near the town of Blanc-Sablon, Québec, in early March. Normally harp seals give birth and raise their pups on sea ice in the Gulf of St. Lawrence, but this year’s ice coverage is at an all-time low, throwing pups’ survival into jeopardy.
Photograph by Mario Cyr

In Mario Cyr’s 40 years as a marine photographer and expedition leader in Canada’s north, he has never seen harp seal pups clustered on shore. Every December, a population of harp seals arrive in the Gulf of St. Lawrence, traveling south from the Canadian Arctic and Greenland to give birth on the sea ice around the Îles de la Madeleine in late February and early March. These harp seal nurseries attract hundreds of people each year, eager to see the fuzzy white pups bellying around the ice and getting fat on their mothers’ milk.

But in recent days, hundreds of pups instead have appeared on the beach just outside the small community of Blanc-Sablon, Québec, some 350 miles northeast of the islands.

The sea ice cover in the Gulf of St. Lawrence is at its lowest since 1969, when yearly measurements first began. As ice pans dissolve into slush or crack into small pieces, seal pups forced to the seashore risk being crushed by broken-up chunks of ice, drowned, or eaten by land-based predators such as coyotes. It is expected that 2021 will be a devastating year for harp seal pup mortalities.

“This year, there is absolutely no ice,” Cyr says. “These seals are out of options.” Cyr spent days photographing the pups for National Geographic as they struggled in the slush at the waterline or lay on the snow banks calling for their mothers.

Harp seals, which can grow up to six feet long and weigh up to 400 pounds, typically spend little time on land, preferring to cruise the chilly waters of the North Atlantic and Arctic Oceans feeding on crustaceans and fish. They remember where they were born, and each winter, they tend to return to those sites where they congregate en masse to breed and give birth.

Sea ice is the only place harp seals will give birth, but coverage in the Gulf of St. Lawrence is less predictable every year. “There’s hardly anything left in the gulf,” says Peter Galbraith, a sea ice expert with Canada’s Department of Fisheries and Oceans.

Most years see about 15 cubic miles of ice across the gulf, he says. This year, the ice peaked at less than three cubic miles in February, and it’s already dwindled to less than one.

“The quality of the ice is also important for harp seals,” Galbraith says “They want thick floes that resist storms and give the wind nothing to grab onto.” A decade-long warming trend in the Gulf of St. Lawrence continued this winter, with deep waters reaching record highs. What little ice has appeared in the gulf lacks density and breaks easily.

“Waves creep into ice floes and break them up,” Galbraith says. “If you’ve got seals on small ice floes, with thin ice, and lots of open water, any storm can come and blow pups into the cracks or right into the water before they can swim.”

Seal mothers search for a place to give birth

The seal mothers with cubs on shore in Blanc-Sablon likely traveled south into the gulf, as they do each year, to feed during the winter months, says Garry Stenson, an expert on harp seals with the Department of Fisheries and Oceans. But when it came time to birth their pups, they would have found themselves without the ice they usually would use for a nursery, forcing them to travel north again.

But farther north, along the northeastern parts of Newfoundland, the ice conditions also have been poor, according to marine mammal expert Mark Hammill.

The expectant seal mothers needed to find ice fast and likely settled for broken pieces near the shore. They may have discovered pockets of ice not far from Blanc Sablon, or further out near Belle Isle, only to have that ice drift towards the shore, breaking up as it was ripped at by the wind and waves.

“The ice is quite compact in a good ice year and stays together,” Stenson says. “But in bad ice years, there’s lots of space, the ice is much more mobile, and moves with the wind and current.”

When that happens, harp seal mortality is high. The pups don't have any blubber at birth, but quickly gain weight nursing on high-fat mother’s milk. They need weeks on stable ice to mature physiologically so they have the stamina required for swimming in frigid waters. A fall into the ocean without mom nearby almost certainly will be fatal.

It’s unclear whether the pups washed ashore on broken ice or were born on the beach, but either way, it’s unlikely any of the pups at Blanc-Sablon will survive, Hammill says. They may be crushed, drowned, or left defenseless against predators if their mothers can’t find them after they’ve drifted to shore.

Seal expeditions to disappear with the ice

Harp seals may eventually stop returning to these waters as warmer temperatures caused by climate change delay or prevent the development of ice, Galbraith says. The cold seasons are getting shorter, and what began as occasional anomalies of ice failure in 1958 and 1969 have escalated to ice shortages in 2010, 2011, 2017, and 2021.

If the sea ice continues to fail in the gulf, the seals will eventually have no memory of their nurseries in these waters and will stop migrating to the Gulf of St. Lawrence altogether.

That would mean a crushing new reality for the communities here, particularly on the Îles de la Madeleine where seal watching expeditions draw thousands visitors and provide jobs during the winter months. “It’s so strange with the ice. We can feel it, something is missing. At this time of year, walking on beach, [there’s] no ice, just water, water, water,” says island resident Ariane Berubé. “It’s like there’s a break in our life cycle. We jump from fall to spring, and a season is missing.” (Nat Geo selected the Îles de la Madeleine as one of its best trips of 2020.)

Berubé is the communications director at Hotel Accents, which has been offering tours of the pupping nurseries on the ice for more than 40 years. There was a time when they could fly a helicopter out onto the ice and find a harp seal nursery with thousands of pups. She says they were shocked when the ice failed in 2010 and had to cancel all their tours, but they found opportunity in the loss that year.

Accents revised its program to include climate education and lectures on conservation, and Berubé says their visitors are now keen to find out how the sea ice can be preserved, so future generations can experience the joys of seeing the seal nurseries on the ice floes.

“We are making the harp seal pups the face of the climate crisis,” she says, adding that the disappearance of these baby seals has helped underscore other climate change-driven issues faced in the region, including widespread coastal erosion caused by a lack of protective sea ice and disruptions in lobster populations, which are slowly heading north to colder waters.

Meanwhile, on the shores of Blanc-Sablon, the spectacle of harp seal pups on the beach continues to draw people from the nearby village, including classrooms of children and visitors on snowmobiles. One visitor posted a video celebrating the sighting but may have actually captured the last moments of an exhausted infant in distress. It is likely to be only one of many harp seal pups beneath the waves this year.