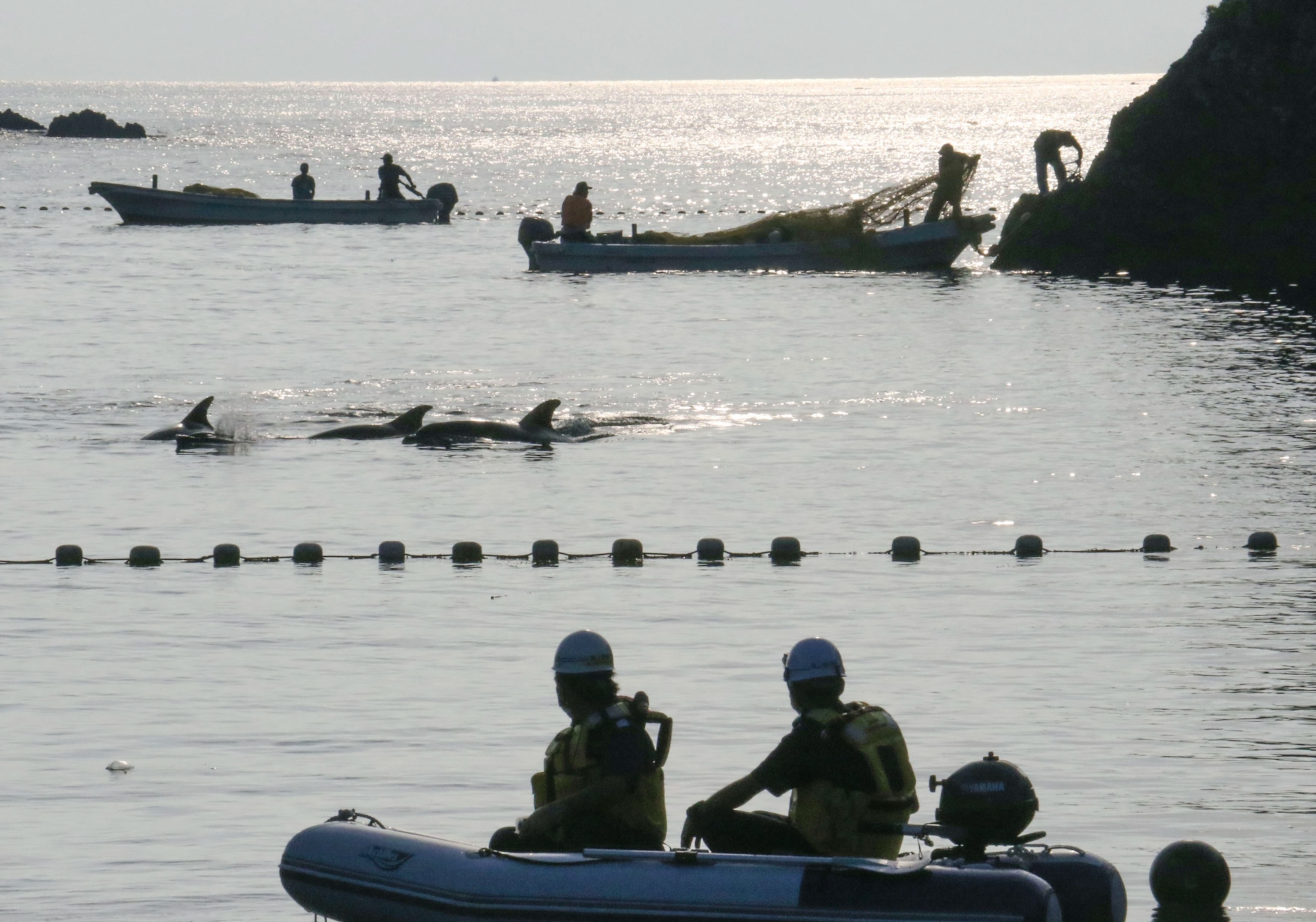 More than a decade after “The Cove” revealed the cruelty behind the practice, Taiji fishermen continue to round up dolphins to supply aquariums and marine parks.

Bottlenose dolphins, caught on the first day of Taiji's infamous dolphin hunt, are held in the cove, while fishermen arrange nets. Members of the coast guard, in hard hats, observe.
Photograph by Kyodo via AP Images

The Japanese town of Taiji’s controversial dolphin hunt is now in its ninth day, and fishermen have caught at least seven bottlenose dolphins so far in a hunting season expected to last until March 2022.

The hunt, operated by the Isana Fishermen's Association, has a catch quota of 1,849 dolphins from nine species that the Japanese government has permitted to be killed or captured this season. They include bottlenose dolphins, striped dolphins, melon-headed whales, and Risso’s dolphins.

Some are caught and sold to marine parks and dolphinariums, mainly in Japan and China, and several hundred are slaughtered for meat, according to the Dolphin Project, a California-based advocacy group. (Over the past several years, hunters have caught several hundred fewer dolphins than the quota allows).

Activist Ren Yabuki, with the animal welfare group Life Investigation Agency, in Japan, has been at the Taiji cove every day, filming and reporting catch numbers on social media in partnership with the Dolphin Project. Yabuki has done this every season for the past six years.

“When the dolphins and whales are driven into the cove from offshore, it is like your blood boils and starts to flow backwards,” Yabuki says. “Dolphins and whales, who have done nothing wrong, are suddenly and forcibly captured. Their families are torn apart. They are captured for the aquarium trade in front of [their] family and pod members or killed right in front of their families and siblings. (Read about how we know animals think and feel.)

The hunt has attracted global condemnation since 2009, when the Academy Award-winning documentary The Cove revealed how Taiji fishermen round up hundreds of dolphins, forcing them into the cove, where they’re captured or slaughtered.

The Taiji government did not respond to National Geographic’s request for comment but has previously defended the hunt in other media as a 400-year-old cultural tradition. (Critics, however, argue that the methods of hunting—groups of motorized boats rounding up entire herds, often for the dolphinarium trade—have evolved from what was once a sustenance tradition.)

Eyewitness reports from Dolphin Project volunteers say fishermen typically kill the dolphins by spearing them below their blowholes to sever the spinal cord. But it’s been noted that the dolphins may not die instantly and that some have been seen moving afterwards. Other eyewitnesses have reported that calves, unable to survive alone, have been released back into the ocean after their mothers were killed. (Read about the minke whale tangled in the fishing nets near the Taiji Cove for 19 days before fishermen tied a rope to its tail and dragged it until it drowned.)

Dolphin meat is still popular in Taiji, but demand for dolphin and whale meat nationwide in Japan has decreased in recent years, and many distributors and processors have closed.

A dolphin can sell for $500 for its meat, but a live bottlenose dolphin for the dolphinarium trade can bring $8,000 to $12,000, according to the Washington Post.

After dolphins are driven into the cove, trainers work with fishermen to select individuals for captivity. Fishermen “might drive in a pod of eight Rizzo’s dolphins, and one might be the perfect young female they need [for training],” Burns says. “The rest are slaughtered.”

Burns’s team says they expect that many of the dolphins captured this season will be sent to Taiji’s government-owned Whale Museum and to Moriura Bay, where the government keeps dolphins in sea pens. They hold a hundred to 200 cetaceans between them and regularly are added to from the drive hunts, according to the Japan Times. At the Whale Museum, visitors can buy whale and dolphin meat from the gift shop to snack on while watching dolphin shows.

The city of Taiji is working to convert Moriura Bay, which is about twice the size of New York’s Yankee Stadium, into “a giant dolphin pool,” the Japan Times reports, but for now, it’s holding dolphins in sea pens.

“Taiji’s invested heavily in Moriura Bay and in stocking its own reserves with dolphins,” Burns says. As pressure increases to end the hunts, breeding at the museum and bay likely will ramp up so Taiji’s dolphin-trade industry can keep going.

Representatives from Taiji’s Whale Museum did not respond to National Geographic’s request for comment.

For a variety of cultural and legal reasons, public protest is less common in Japan than in some other countries. Foreigners often protest the hunts with bloody and graphic imagery. Meanwhile, Japanese-led protests, more restrained, are becoming increasingly common. This year several dozen Japanese animal advocates protested in Taiji on the first day of the hunt, reports Japan Forward, carrying signs with messages such as, “Let dolphins swim free” and “Love all animals.”

“Since the dolphin hunt and dolphin trade in Taiji is run by Japanese hunters, it is up to Japanese people to take the lead,” Yabuki says. “By documenting the entire hunting process and exposing the reality of this dolphin exploitation and how it is connected to aquariums [and] marine parks, people [may] choose not to go to support such captive dolphin facilities.”