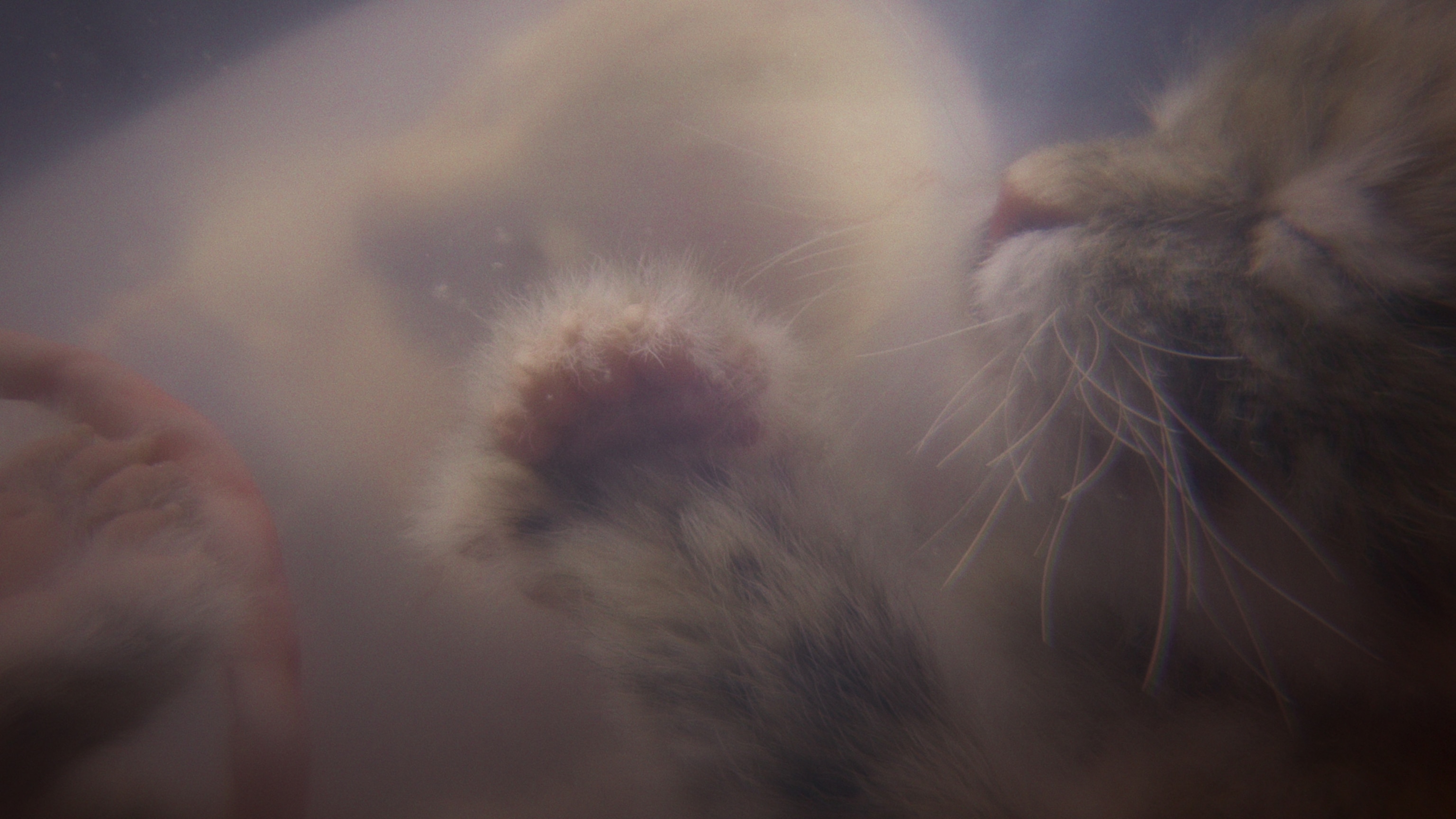 From keeping backup embryos to being perpetually pregnant, many animals have incredible adaptations for ensuring their young will survive.

A kitten in-utero is shown in a simulation created for National Geographic’s “Growing Up Animal” on Disney+. Sculptors handcrafted and painted lifelike 3D animal babies with detailed precision, down to blood capillaries and hair follicles.
Photograph by National Geographic for Disney+

More than 5,400 mammal species roam the planet, running the gamut in size and appearance—from tiny bumblebee bats and  hundred-foot-long blue whales— to spindly-fingered aye-ayes and scaly pangolins. That astonishing diversity is also on display in how mammal mothers undergo pregnancy and birth, from the domestic dog bearing pups from different fathers in one litter to the swamp wallaby carrying babies in two separate uteruses.

Intelligent, long-lived species often have lengthy pregnancies, which allows ample time for fetal development. The African elephant has the longest pregnancy, at a whopping 22 months.

“The baby elephant is born very complete, and it can walk long distances,” says Thomas Hildebrandt, a veterinarian at Germany’s Leibniz Institute for Zoo and Wildlife Research. (See touching photos of animal mothers and babies.)

Similarly, the five species of rhinoceros are pregnant an average of 16 months, resulting in a fully developed calf. Some marine mammals, such as the bottlenose dolphin, carry their young for between 10 to 12 months, which means that calves can keep up with their mother from the get-go.

On the other end of the spectrum, the animal with the shortest known gestational period is the Virginia opossum. North America’s only marsupial can give birth to an average of eight to nine infants just 11 to 13 days after mating; each of these “pinkies”—so called for their fingerlike appearance—are the size of a dime. They make their way from the birth canal to the pouch to continue their development.

Here are more fascinating adaptations that mammals have evolved to carry their babies—and ensure their survival.

Animals with shorter gestation periods have multiple babies, like your typical house mouse, a breeding machine that’s pregnant for just 19 days—yielding between 12 to 20 babies every two months. Because “their environment is very dangerous and constantly changing,” Hildebrandt says, the glut increases the chances that some will make it to adulthood.

Domestic dogs and cats, as well as their wild counterparts, also bear multiple babies in a short period of time: A typical domestic dog gestation is 63 days, resulting in an average of five to six pups.

Pups in a litter can have multiple fathers, a phenomenon called superfecundation. Because female dogs release more than one egg when they ovulate, and their cycle can last a week, they can mate with different males to fertilize as many eggs as possible, says Alexander Travis, a reproductive biologist at Cornell University College of Veterinary Medicine.

That’s why some dogs can have mixed-breed litters: A poodle, for instance, can give birth to a poodle-beagle mix and a poodle-retriever mix at the same time.

More than 130 mammal species, such as bears, seals, sea lions, and several marsupials, can delay a pregnancy until conditions are just right. That could mean favorable weather, an abundance of food, or after older, competing siblings have set off on their own.

In this scenario, called delayed implantation, “the sperm meets the egg, it fertilizes, and it becomes an early embryo. But it does not implant,” explains Travis. Instead, the fertilized egg remains in a suspended state called embryonic diapause.

Steller sea lions of the northern Pacific can postpone giving birth to her single pup until “food is plenty and conditions are mild,” says Carrie Goertz, director of animal health at the Alaska SeaLife Center, an aquarium and rehab center. (Read how animal mothers remind us a lot of our own.)

In the summer, Steller sea lions give birth on land, then come into heat just two weeks later, when they can get pregnant again. “The egg gets fertilized, and another eleven and a half months go by before they give birth again,” says Goertz.

During this state of suspended growth, mom returns to the water to forage. “They're actually eating for three for most of their adult life, and it's just amazing that they have the resources to be able to go through that.”

All four species of kangaroo have two separate uteruses, an adaptation that allows them to carry a “backup” embryo. After giving birth to their jellybean-size, hairless joey, females often quickly get pregnant again in the other uterus. (Read about the incredible travails faced by animal moms.)

As this little one matures in mom’s pouch, she keeps the other fertilized embryo in arrested development until the sibling is weaned and can enter the pouch. A kangaroo doe can produce milk with different nutritional values for two joeys of different ages, and she has four teats from which the two joeys can suckle.

If a female loses a joey, “then the embryo that’s in diapause resumes development, so they can be more reproductively successful and have more offspring without having to wait a whole year,” says Travis.

A March 2020 study showed that the swamp wallaby can also have two embryos at different stages of development in its uteruses. Using a high-resolution ultrasound, researchers learned that the females ovulate, mate, and form a new embryo while still carrying a full-term fetus in the other uterus. That means the swamp wallaby is the only known species that is essentially always pregnant.

Peeking inside the womb

While much is known about reproduction and mating in the animal world, what happens inside the womb is more of a mystery.

That’s why more scientists are increasingly turning to advanced technology to see what happens as an animal develops in utero. Using 4D imaging on a pregnant captive African lion, for instance, Hildebrandt discovered a protective, hammock-like structure in which the cubs lie inside the lioness’s womb.

When a lioness is hunting prey like a zebra, it’s likely to get kicked in the abdomen. “These challenges would normally kill the baby, but it doesn't because nature designed a way, a suspension system to reduce the impact of these challenges,” he says.

For the new National Geographic documentary series, Growing up Animal, which streams August 18 on Disney+, sculptors handcrafted and painted lifelike 3D animal babies with detailed precision, even down to blood capillaries and hair follicles. For the first time ever, viewers can witness baby chimpanzees, Steller sea lions, African wild dogs, and others inside the womb.

“Everyone loves cute animal babies, but not everyone realizes how extraordinary these vulnerable newborns are, from both the adaptations they are born with and their remarkable capacity to learn how to survive,” Dominic Weston, producer of the show, said by email. (See photographs of animals in the womb.)

A newborn chimp, for example, is totally dependent on its mother, but unlike a human baby, it has the strength to hang on to her fur while the pair move around the tree canopy at heights of up to a hundred feet.

“There are many established and newly emerging technologies being deployed in the ongoing study of animal babies, inside the womb and out,” Weston says.

“What I have learned across this series is that it is individual scientists’ curiosity, inventiveness, and sheer dedication that allows us to see how miraculous these animals are, and to understand how important it is for us all to protect them.”