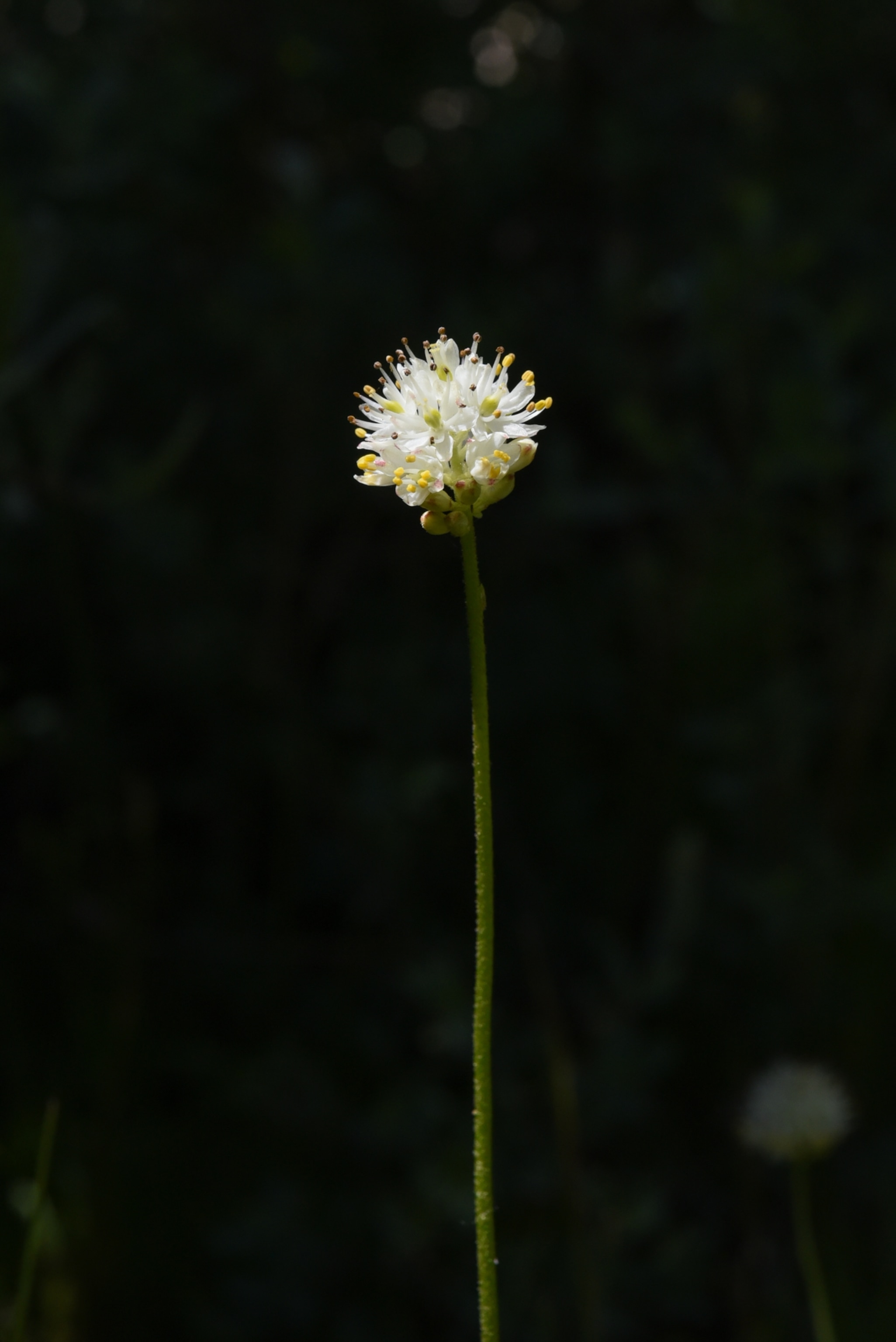 False asphodel, a flower that grows in the high-altitude wetlands of western North America, gets much of its nutrients from eating insects.

Western false asphodel has pretty white flowers and hairs on its stalk that can trap and digest insects.
Photograph by Bob Sweatt

If you hike through a mountain bog along the West Coast of North America in midsummer, there’s a decent chance you’ll run into a false asphodel (Triantha occidentalis), an unassuming flower that shoots up dark green stalks with white blooms.

As it turns out, the false asphodel, found from Alaska south to California, has been hiding a secret from the human race: It’s a carnivore.

Recently, botanist Qianshi Lin heard from a fellow student at the University of British Columbia that the plant had structures on its flower stalk that looked a little like the sticky traps that other carnivorous plants, such as sundews, use to catch insects. So Lin decided to figure out if the same might be the case for this flower.

Lin’s research shows that, indeed, false asphodel, a plant known to science for over a century, traps and digests small insects. As much as two-thirds of the nitrogen—a vital nutrient—in its leaves comes from these animals, according to a study published August 9 in Proceedings of the National Academy of Sciences.

“This kind of plant turns the tables on animals and eats insects, which is quite cool,” says Lin, who is now a postdoctoral researcher at the University of Toronto.

Prior to this study, scientists knew that carnivory evolved 11 times in different types of plants. This discovery represents a twelfth independent evolution of the trait, Lin says.

False asphodels have some similarities with sundews, a genus containing over 150 plants that catch insects using sticky and often vibrantly colored hairs, before secreting enzymes that digest and liquify the animals, and absorbing them whole.

But these bog flowers are in a family of small herbaceous perennials, Tofieldiaceae, that has no known meat-eaters. False asphodels also have a very short growing season: sprouting after the snow melts in May, flowering in June and July, producing seeds and withering away by early fall. (Read more about carnivorous plants’ fatal attraction.)

Like false asphodel, most carnivorous plants are found in sunny places with nutrient-poor soil, where the ability to digest insects provides an advantage. However, producing structures capable of catching and devouring animals is energetically costly, and only 0.2 percent of flowering plants are thought to possess this ability.

One reason why this plant’s carnivory was overlooked is that these hairs are very small and grow only on the flower stalk—a feature unlike any known carnivorous plant, Lin says.

Botanists have found traps near flowers but not exclusively in this location, as is the case for this species, says Adam Cross, an ecologist who studies such plants at Curtin University in Australia, who wasn’t involved in the paper.  Preying upon insects that might be pollinators could be counterproductive, Lin says—but the research shows this bog flower almost entirely catches small ants and flies, and not larger pollinators such as bees.

Andreas Fleischmann, a scientist with Botanische Staatssammlung München, a German herbarium and research center, says simply labeling the plant as a “carnivore” may miss some potential qualifications. He says the situation with this plant might be more aptly described as “defensive killing,” since the stick hairs also seem to have the function of preventing non-pollinator insects from entering the flowers.

“For plant carnivory, in my opinion, the main criterion is not so much if the plant digests the insects ... but essential is the attraction of prey,” says Fleischmann, who was not involved in the paper. And he’s not sure the sticky hairs of Triantha are attracting insects.

Proving a plant is a carnivore is more difficult than it might sound. To do so, Lin first fed 150 captive fruit flies a medium containing nitrogen-15, a stable isotope of nitrogen that contains an extra neutron, and which can be used to track the transfer of nutrients from animals to plants.

Lin and colleagues then fed the fruit flies to 25 wild false asphodels growing in a bog in British Columbia, placing the insects on the flowers' stalks. After several weeks, the scientists harvested the plants and analyzed their chemistry. The results revealed the nitrogen-15 within its leaves, proving nutrients from the flies had been absorbed and incorporated into the plant. To be exact, 64 percent of the study plants' nitrogen came from the flies. (Learn how carnivorous plants eat salamanders.)

The researchers also examined the sticky hairs and found that they excrete phosphatase, an enzyme found in other carnivorous plants that helps break down tissue and release phosphorus, another important nutrient for plants.

The discovery shows how much plant scientists have yet to discover, even about previously well-known species.

“We need more observant botanists in the field to [discover] such cryptic carnivores,” says Hoe-Han Goh, a plant researcher at National University Malaysia who wasn’t involved in the paper.

Lin agrees. “This is a sign that there are more carnivorous plants out there waiting to be found.”