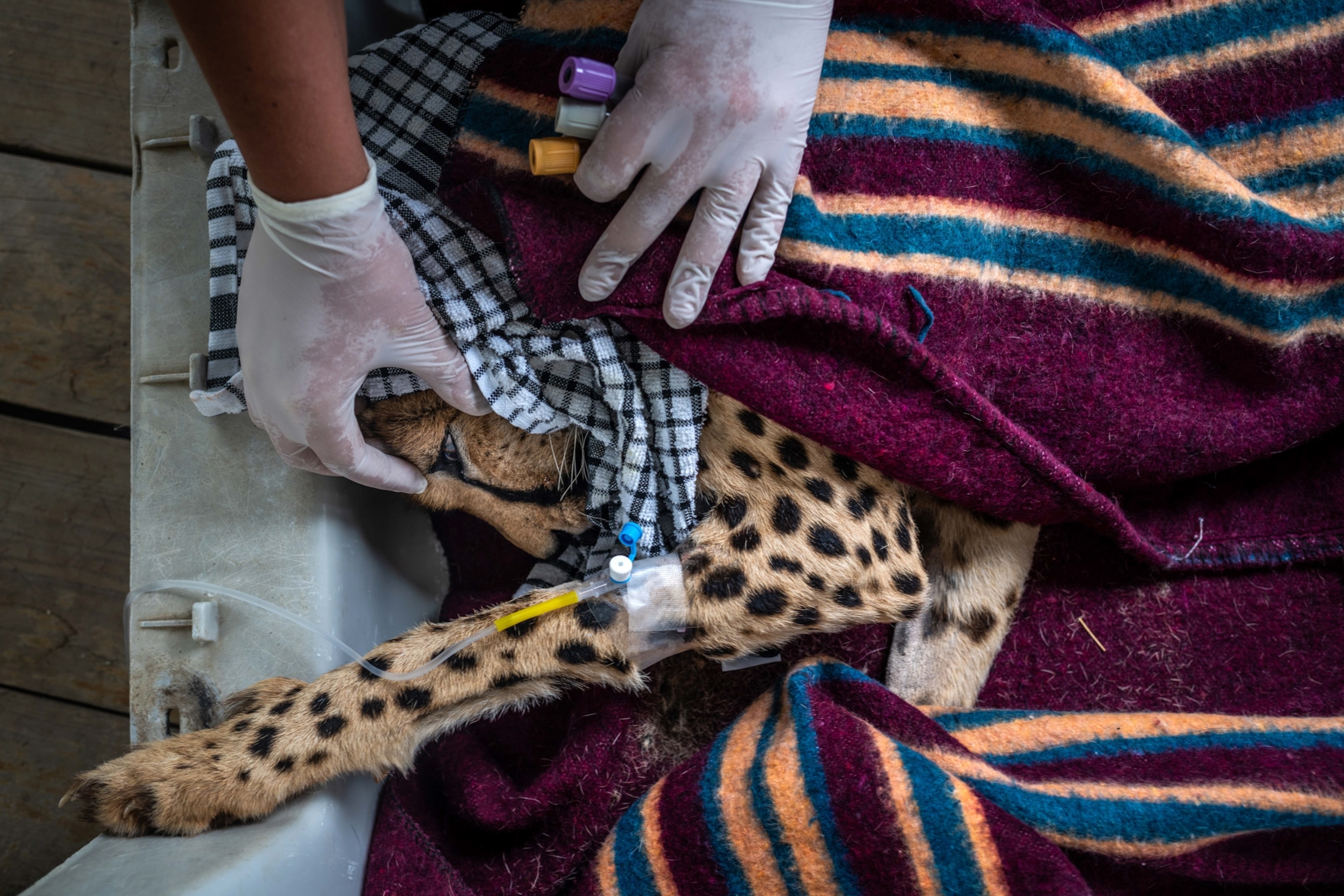 Photographing the sleepless, three-day effort to save an injured cheetah

“For an instant, the divide between us and the cheetah slips away,” writes Nat Geo Explorer and photographer Nichole Sobecki.

A veterinarian checks the pupils of a barely conscious cheetah, dehydrated and suffering from infected puncture wounds, likely caused by another animal. The cheetah is one of an estimated 20 that live in Samburu National Reserve and nearby Buffalo Springs, in northern Kenya.

If you know one thing about cheetahs, it’s likely their status as the fastest land animal in the world. They boast the longest and most flexible spine of any cat species, making possible speeds of up to 75 miles an hour. Like a coiled spring, they can accelerate from zero to 60 in just three seconds, faster than most cars. Their lithe, spotted bodies were built to run, and to run more perfectly than any animal alive.

Cheetahs aren’t the bullies of the feline playground. They purr, not roar. They aren’t designed to fight hard or defend territory. And all this can leave them vulnerable.

For most of a year, I’ve worked with writer Rachael Bale on a magazine story about cheetah trafficking through Somaliland and to countries in the Persian Gulf, where the cats are prized as the ultimate accessory for the rich. It’s the newest of the many threats cheetahs face. Since the early 20th century, the conversion of wild land to farms and livestock pastures has wiped out more than 90 percent of the global population. Fewer than 7,000 adult cheetahs are left in the wild today, most in southern and eastern Africa.

For the past decade I’ve made my home in Kenya, a nation known for its expansive beauty and abundance of wildlife. Habitat loss and conflict with pastoralists and their herds are pushing the cheetahs here to the brink of extinction, and I wanted to understand what that looks like.

The drive to Samburu National Reserve in northern Kenya winds along the edge of the East African Rift, the origin of humankind. The congestion of the capital gives way to a patchwork of lush hills. Past the sentinel Kirinyage, commonly known as Mount Kenya, the farms yield to rangelands, and fertile green warms to rust-red earth and acacia-lined riverbeds.

I’m heading to meet naturalist Julius Lesori, a guide who has worked in Samburu National Reserve for 14 years and has agreed to help me search for cheetahs. As I pull up and begin to unload my gear, he stops me. “I’ve found one,” he says excitedly. “Let’s go!”

The landscape speeds by, bumps unheeded, as we race to find the cheetah Lesori had spotted earlier. “She was right there,” he says, slowing down and pointing to a now-empty road. Moments later I spot her—a feline-shaped silhouette shaded from the high sun by a tall bush.

We settle in a respectful distance away to wait for her to emerge.

Hours pass, and the shadow stays put. Lesori begins to worry: It’s not normal for a cheetah to stay still so long. We’re using the zoom of my camera lens to look for injuries when Samburu National Reserve rangers pull up alongside us in a truck. As we begin to explain, the cheetah stands slowly. She’s limping. Searching for better cover, she exposes open wounds along her hindquarters, belly, and leg.

With fewer than 20 cheetahs left in the Samburu National Reserve and nearby Buffalo Springs, every individual counts. Three cheetahs have died here in the past four weeks alone: First, a cheetah was shot by herders illegally grazing their animals in the reserve. Then a female, pregnant with two cubs, was run over by a speeding vehicle. And a third, an adolescent, was found alone and dehydrated, too young to survive without its mother.

This region is balancing on a knife’s edge. The climate crisis is leading to increasingly severe droughts and desperation. As herding communities struggle to find good grazing for their livestock, wild animals must compete with domestic ones—and humans—for space and other resources. The land is ever more fragmented by human expansion.

The rangers alert the Kenya Wildlife Service (KWS), the country’s wildlife authority, that a wounded cheetah’s been found. But the KWS veterinarian assigned to this region is away. Instead Michael Njoroge, a KWS vet in Nairobi, promises to drive up first thing the next morning.

For reasons that are still unclear, it takes two nights and an endless day before help arrives. During that time, Lesori and I stay with the cheetah in an effort to keep other predators at bay. Later Cosmas Wambua, co-founder of Action for Cheetahs in Kenya, joins our watch.

With nothing to do but wait and hope, there are brief moments in the open savanna when I forget my humanness. For an instant, the divide between us and the cheetah slips away. (Later I find out that the rangers named the cheetah Nichole, which made me feel honored and sad in equal measure.)

Humans like to tell ourselves that what makes us remarkable are the ways that we’ve transcended the natural world. I disagree. It’s this false pride in our separateness that enables the horrors we perpetrate against nature, animals, and one another.

Nichole the cheetah clearly had been wounded by another animal, likely a big cat or hyena, not a human. That’s a normal part of a functioning ecosystem, except this backdrop of profound transformation has raised the stakes. Ideally, cheetahs need vast expanses with suitable prey, water, and cover to survive. Even in wildlife reserves such as Samburu, they face high densities of larger, competing predators. The net around them is tightening.

The morning of my third day in Samburu I meet Njoroge, dressed in green fatigues and carrying a battered blue cooler filled with medical supplies. By this time Nichole can barely lift her head in protest as he assesses her. Suddenly, she finds herself being hauled into the back seat of the veterinary truck like a fierce ragdoll. She’s too weak to even require sedation.

We’re off, racing through the park gate and the small town just beyond, to the North Kenya Veterinary Services clinic at the foot of Mount Kenya, a frantic two-hour drive.

When we arrive, a team of veterinary surgeons led by Kivara Luke and Moses Wamaitha is waiting. The cheetah is lifted onto a striped blanket, her spotted tail hanging limply from its folds, and carried to a procedure room. The team works quickly, silently in sync. Nichole gets an IV catheter for fluids and antibiotics, and someone places a dishtowel over her amber eyes to minimize her reactions. They clean and medicate her puncture wounds, and she’s continuing to cling to consciousness, but blood tests suggest she’s becoming septic.

What’s the prognosis? I ask Luke when they’re finished treating her.

“We’ve done what we can and now it’s up to her,” she says, with a tight smile.

All of a sudden, the plan changes. To this day, I’m not certain why. While both North Kenya Veterinary Services and nearby private reserve Ol Jogi have offered their veterinary clinics for the duration of Nichole’s recovery, on late Friday afternoon KWS decides to drive her an additional 120 miles to their Nairobi headquarters for continued care.

After the sleepless days of vigil, and Nichole’s transfer to care in the capital, I’ve returned home to await an update on the cheetah’s health. In the cool of Sunday morning, I jog through the woods of Karura, Nairobi’s largest forest. Amidst the chatter of monkeys and birdsong, my phone pings. The message from Mary Wykstra, the founder of Action for Cheetahs in Kenya, was brief: “Was just informed the cheetah has passed away.” I blinked up into the canopy, which seemed to dim.

She survived until Saturday night. With the moon hidden in shadow, on the edge of the city and far from home, she departed.

I was recently reminded of the concept of “ghost species,” which I first read about in an essay that British nature writer Robert MacFarlane published in a 2008 issue of Granta. He defines them as “a species that has been out-evolved by its environment…the last of their lines.”

The world today feels increasingly full of such spirits. The cheetah isn’t alone in fading from our landscape; far from it. According to the World Wildlife Fund’s 2020 Living Planet Report, wildlife populations have already plummeted by two-thirds since the 1970s, largely due to changes to the land and to the wildlife trade. This is why Njoroge says he went to such lengths to try and save the cheetah. “She was young and healthy, with a chance of recovery, and there are so, so few of them left,” he told me.

Cheetahs, I’ve learned, have a wide vocabulary of sounds, from purring and hissing to trills and yips. Their high-pitched chirps can be heard across vast distances and are used during courting or by a mother calling her cubs. Their small, round ears catch a far wider frequency of sound than humans can imagine.

I’ve returned to Karura Forest many times since receiving Wykstra’s message about Nichole the cheetah, and my mind frequently wanders back to that day. Sometimes I think I hear a sharp, feline chirp through the trees. It’s probably just a ghost.

Editor’s note: On September 22, 2021, this story was updated to correct the name of veterinarian Michael Njoroge.

National Geographic Explorer Nichole Sobecki photographed cheetahs for the September 2021 issue’s feature on cheetah trafficking. The National Geographic Society, committed to illuminating and protecting the wonder of our world, funds Sobecki’s work on the vital role the Congo Basin plays in the ecological balance of our planet. Learn more about the Society’s support of Explorers.