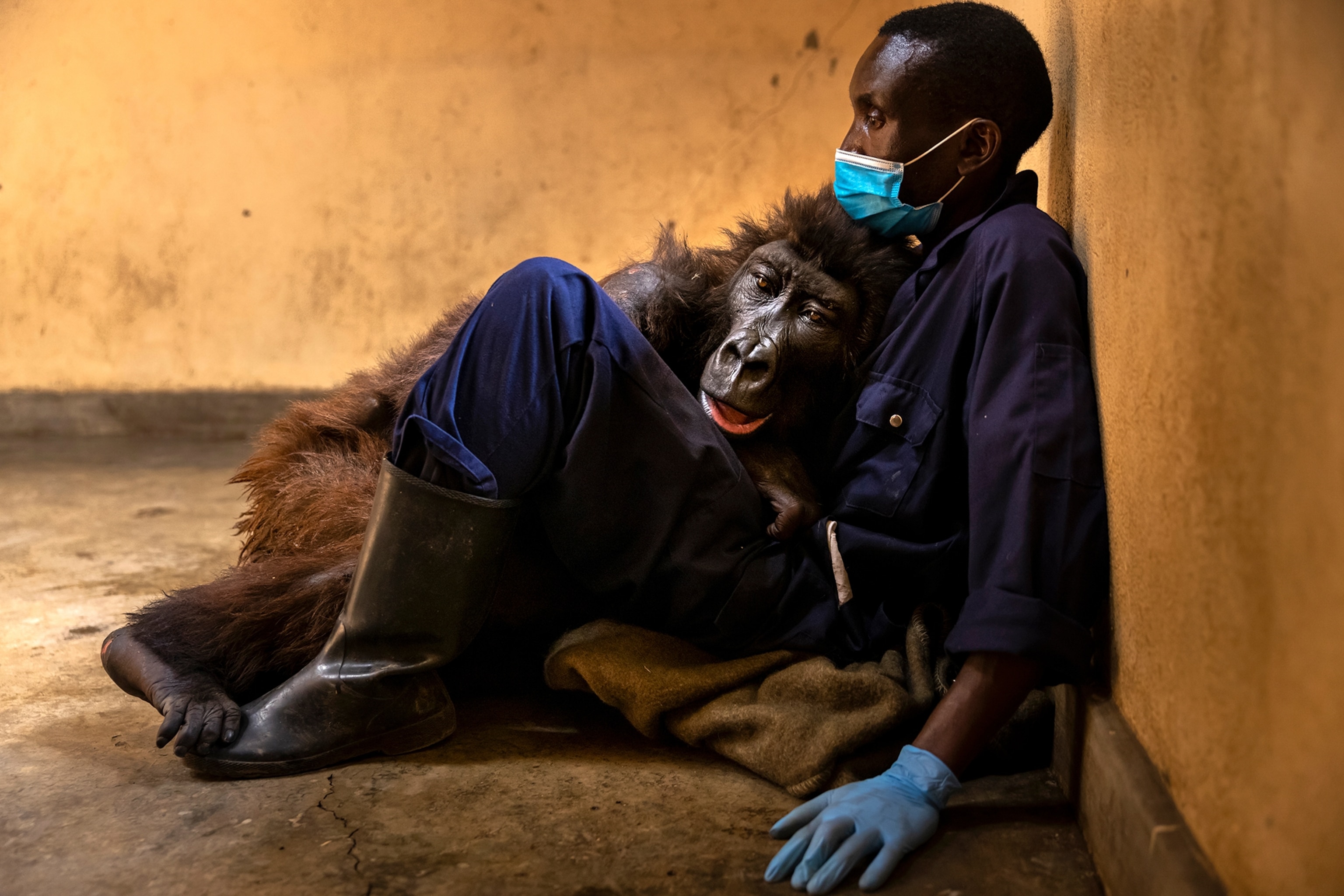 Ndakasi the mountain gorilla passes away in her caregiver's arms after a prolonged illness on September 26, 2021. Andre Bauma and others at the Senkwekwe Mountain Gorilla Center have cared for Ndakasi and other orphans for the last 14 years.

In 2007 I went to Virunga National Park on an assignment, and I was working with a group of rangers who were fighting paramilitary groups. We got word that some critically endangered mountain gorillas had been killed under mysterious circumstances. That’s when I first met Ndakasi, in a heavy downpour. She was a few months old and clinging to her mother’s dead body, the blood from multiple AK-47 rounds pooling in the rain around her as the infant tried in vain to suckle her mom.

This senseless killing was a big deal at the time—then there were only 400 mountain gorillas, though today there are still only a little over a thousand of these animals left in the wild. Ndakasi was the only member of her family that still clung to life.

She was fragile and unlikely to survive long. Ranger Andre Bauma took her out of the rain, using the warmth of his body to keep her alive until morning. It was the start of a loving relationship that was to last 14 years. Andre remains the head caregiver at the Senkwekwe Center in Virunga, Africa’s first national park, which is located in the Democratic Republic of the Congo. Ndakasi moved to Senkwekwe where she lived with other mountain gorilla orphans, all cared for 24/7 by the staff. Veterinarian Eddy Syaluha and the Gorilla Doctors team [a group of veterinarians who care for the endangered apes] have been performing miracles there since day one.

Mountain gorillas are sensitive, surprisingly fragile, gentle creatures. They have personalities, idiosyncrasies. They can be joyful, and they can be sad. Just like humans. Ndakasi shared all these things with her caregivers, men who spent more time with the gorillas than with their own families. These orphans won them over, and the caregivers came to love these animals, often describing them as “my own children.” (Go inside the fight to save Virunga National Park.)

Despite a lifetime of extraordinary care, Ndakasi developed a mysterious illness about six months ago. eventually succumbing last week after crawling into Andre’s arms, 14 years after being embraced for the first time. To say he was devastated would be a gross understatement.

When I got the call, I was elsewhere in Virunga with leaders of the park. Everybody had been having an intense discussion, but when the news came in, all went silent. It was unexpected and very sad.

I’ve had many assignments in Virunga since 2007, returning about every 18 months since then, and I’ve gotten to see Ndakasi grow up. I was always impressed by the level of care Bauma and others gave her and the other three mountain gorillas left in captivity there, the world’s only non-wild mountain gorillas, at the orphanage in Goma. (Read National Geographic’s coverage of Ndsakasi’s discovery in 2007.)

Here are four caregivers, who don’t have doctoral degrees and aren’t academics, but they know more about these animals than any academic out there, and they’re not given credit for it.

Mountain gorillas are very human-like and have complex societies. They can get depressed.  This is just my own opinion, but she may have felt that something was missing. ... As valiantly as we try, we can’t replicate what it’s like for them to be in the wild. And it’s difficult to release them because they are territorial, so wild animals wouldn’t necessarily accept them. It’s never been done successfully.

I know they tried everything to save her. They worked with some of the best people in the world. We were not expecting it. In the same way as you would say for a human, however, she died around people that she loved and who loved her. I don’t want to anthropomorphize it too much, but that’s what I saw.

When you look at gorilla’s society, it’s more humane than ours. It’s caring and ordered, and they look after everybody in their family. When Ndakasi was killed, you could see from the tracks in the mud that her father, Senkwekwe, had died trying to defend the females.

Most of what I’ve done for National Geographic has involved the illegal wildlife trade, the negative side of the relationship between humans and animals. I often look at the sharp end of the stick. But whether I’m looking at rhinos or pangolins or lions or elephants—what I have seen is that if you spend time with these animals and treat them respectfully, and win their trust, you can develop amazing relationships with them. You can get to the point where an elephant will greet you in the morning, or look for you if you’re missing, or even show you where poachers are hiding.

You’ve seen the relationship you can form with a dog—the same thing is possible with so many other species. But even more so when it comes to gorillas, which are so human-like. To their caretakers, and many others, they were like humans, they were family.

One small example: When Bauma would take a break, Ndakasi would sometimes go up next to him and hold his hand. Like a close human friend. There’s something going on there that we have not really explored. We’ve really created a them-and-us world, but I think there’s the potential for humans and animals to understand each other better and be much closer. We’re just scratching the surface of what’s possible. And Ndakasi was an example of that.