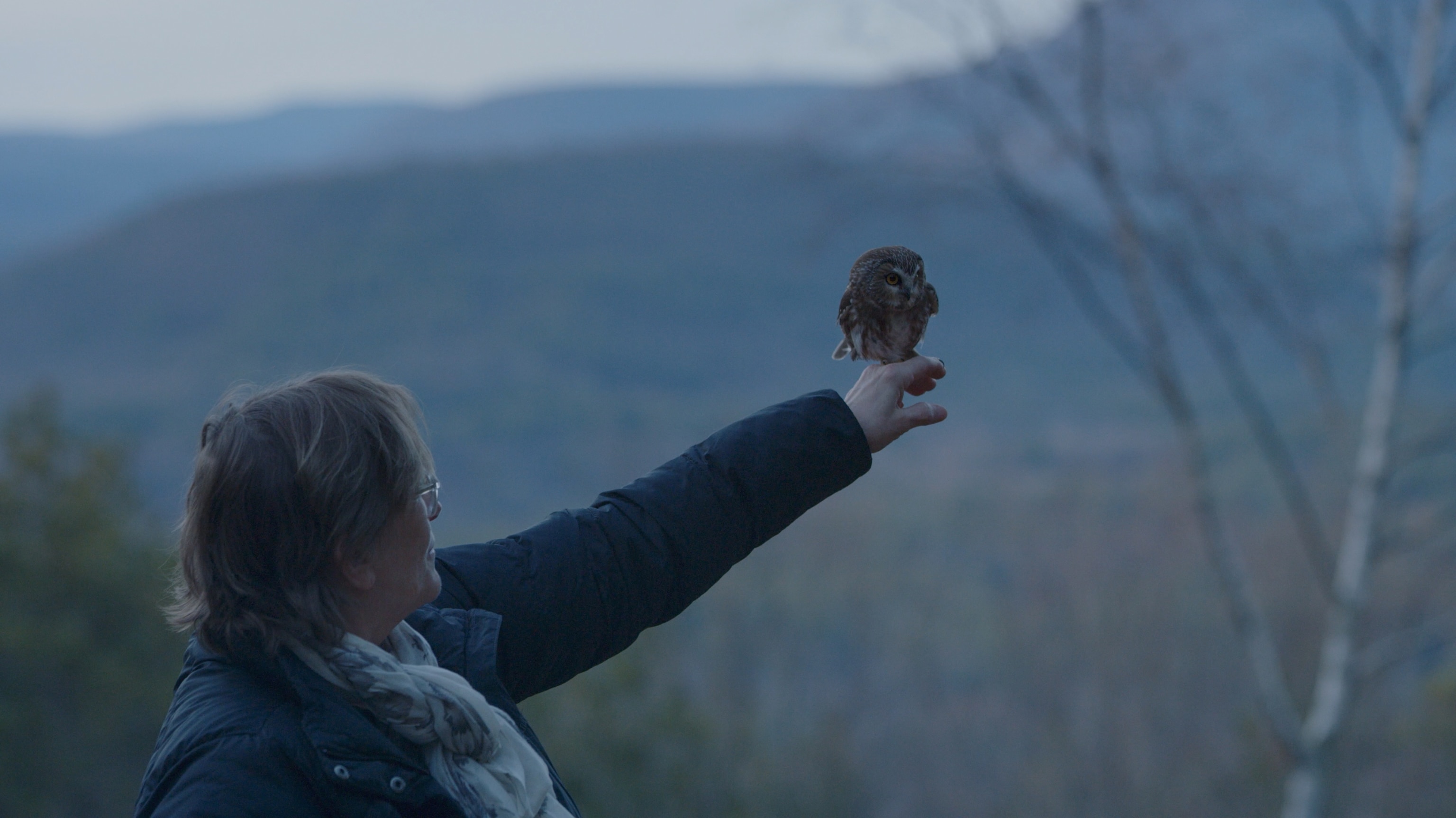 The northern saw-whet owl, one of the smallest in the U.S., recovered quickly from her adventure in a 75-foot-tall tree from upstate New York to Manhattan’s Rockefeller Plaza.

Ellen Kalish, owner of Ravensbeard Wildlife Center, prepares to release Rockefeller the owl. Rockefeller was found dehydrated but uninjured, and was ready for release after six days of rehabilitation.

A tiny owl became a supersize symbol of resilience this week after surviving a road trip inside a huge Christmas tree destined for New York City. Today, she flew free.

The seven-inch-tall northern saw-whet, one of North America’s tiniest owl species, was found nestled inside the base of a 75-foot-tall spruce tree that had been chopped down in upstate New York and transported by truck to midtown Manhattan’s Rockefeller Plaza, to be erected as its annual iconic Christmas tree.

The hardy bird was released into a wooded area in Upstate New York today at dusk—when owls are most active—following several days of treatment at Ravensbeard Wildlife Center.

“I always get choked up when I release birds because it’s such a labor of love. It’s beautiful and it’s what we live for—all the rehabbers—seeing them go back to the wild,” says wildlife rehabilitator Ellen Kalish, who runs Ravensbeard from her home in Saugerties, New York.

When Kalish got a call about the owl on Wednesday, she “almost dropped the phone.” The caller said that her husband, one of the Christmas tree crew members, had just discovered the little owl while the team was preparing to raise the tree in Rockefeller Plaza; the owl rescuer scooped her up, worried that she’d been stuck inside for days and was possibly injured. When Kalish retrieved the owl, she was standing upright in a cardboard box, looking straight at her. “I thought, this is a miracle! How did this bird survive this trip?”

She named the owl Rockefeller, or “Rocky.”

“She was dehydrated and super hungry,” she says, estimating that she probably had not been able to eat or drink for at least a few days. She immediately gave her water and food—a few frozen mice—which she devoured quickly. A veterinarian examined her, and x-rays showed that she had no broken bones or internal damage. By Thursday, Rocky started to bathe herself—a sign she was feeling good. (An owl bath, Kalish says, leads to “water everywhere.”)

While most migratory birds are hardy, Kalish says that, in her 20 years of rehabilitating birds, she’s found that owls can be fragile.

“They’re predators. They’re used to being on the offensive. And when they’re in danger or sick, they just really don’t do well.” For Rocky to bounce back so quickly—and be so animated—after such an ordeal was heartening, she says.

America falls in love with Rocky the owl

Once Kalish knew Rocky was doing well, she decided to share her saga on her Facebook page. “It was such a special story, and everyone needs to smile these days. It was too good to keep to myself,” she says. The story went viral: overjoyed comments started flooding in, and she started fielding calls from media outlets all over the U.S. She responded to these with the help of her family while caring for Rocky and several other birds she’s rehabilitating at home, including a wood duck, four pigeons, and a Harris’s hawk.

While Rocky is irresistibly cute, Kalish doesn’t want people to get the wrong idea. “We have to remember that these are apex predators. They are prickly. They aren’t soft and fuzzy. It’s actually the smallest birds that make me bleed the most.”

The tree that Rocky was found in, donated by Daddy Al’s General Store in Oneonta, New York, was cut down on November 12, after days of being under police protection to ensure no one vandalized it. It was hoisted by crane onto a flatbed truck and driven 200 miles to Manhattan.

It’s unclear when Rocky entered the tree—whether she roosted in it after it had been chopped down or was already there. Kalish thinks it was likely the latter, and she just never made it out. “She could have been hiding in a tree cavity or had head trauma and held onto a branch and didn’t move. She may have been in shock.”

Kalish says the tree crew felt distressed about the stowaway, because they had checked the tree carefully to make sure nothing was hiding inside. But saw-whet owls are tiny and well camouflaged, she says. “It’s easy to miss animals, especially when they’re nocturnal and not meant to be seen.”

On Friday, Kalish moved Rocky to an outdoor practice cage so she could acclimate and Kalish could monitor her flight. By Tuesday at dusk, she seemed ready to go. Kalish brought Rocky to a clearing of nearby conifer forest, removed her from her carrier and raised her toward the sky. Rocky sat perched on Kalish’s hand for several moments, surveying her surroundings. Then, she flew off, settling in a nearby pine tree.

Some people, including Oneonta residents, had previously left comments on Facebook asking why the owl wasn’t going to be released in Oneonta, where the tree was cut down. Kalish says that because saw-whet owls are nomadic, they aren’t tied to a particular habitat. “They don’t have a favorite tree. They exhaust the food source and move on.”

Unlike other birds of prey, which Kalish tries to release where they were found, saw-whet owls don’t mate for life; they find a new mate every season. After consulting with several experts, she says “it didn’t seem worth the stress to take [her] for a car ride,” she says.

Jason Ward, an avid birder and director of diversity at the American Bird Conservancy, agrees. Even at 2.9 ounces, he says, saw-whets “are some of most hardy and resourceful birds out there. I once read about a saw-whet being seen 70 miles out in the Atlantic Ocean. It landed on a fishing vessel.”

Could my Christmas tree have a stowaway owl?

If you’re planning to chop down or buy your own Christmas tree and are concerned about a bird being trapped inside—don’t be.

There are rules in Oregon and Washington State requiring all trees being exported to hot places, like Hawaii, to be shaken for 15 seconds, at a precise speed, to cast off dead needles, yellowjacket nests, and slugs.

“This is a very one-off experience,” as far as Christmas trees go. “Unless you’re taking down a 75-footer,” he says, your tree will likely be owl-free.

As Rocky settles back into the wild where she belongs, her former home—the Rockefeller Square Christmas tree—will be lit up in a five-mile-long strand of twinkling lights on December 2.