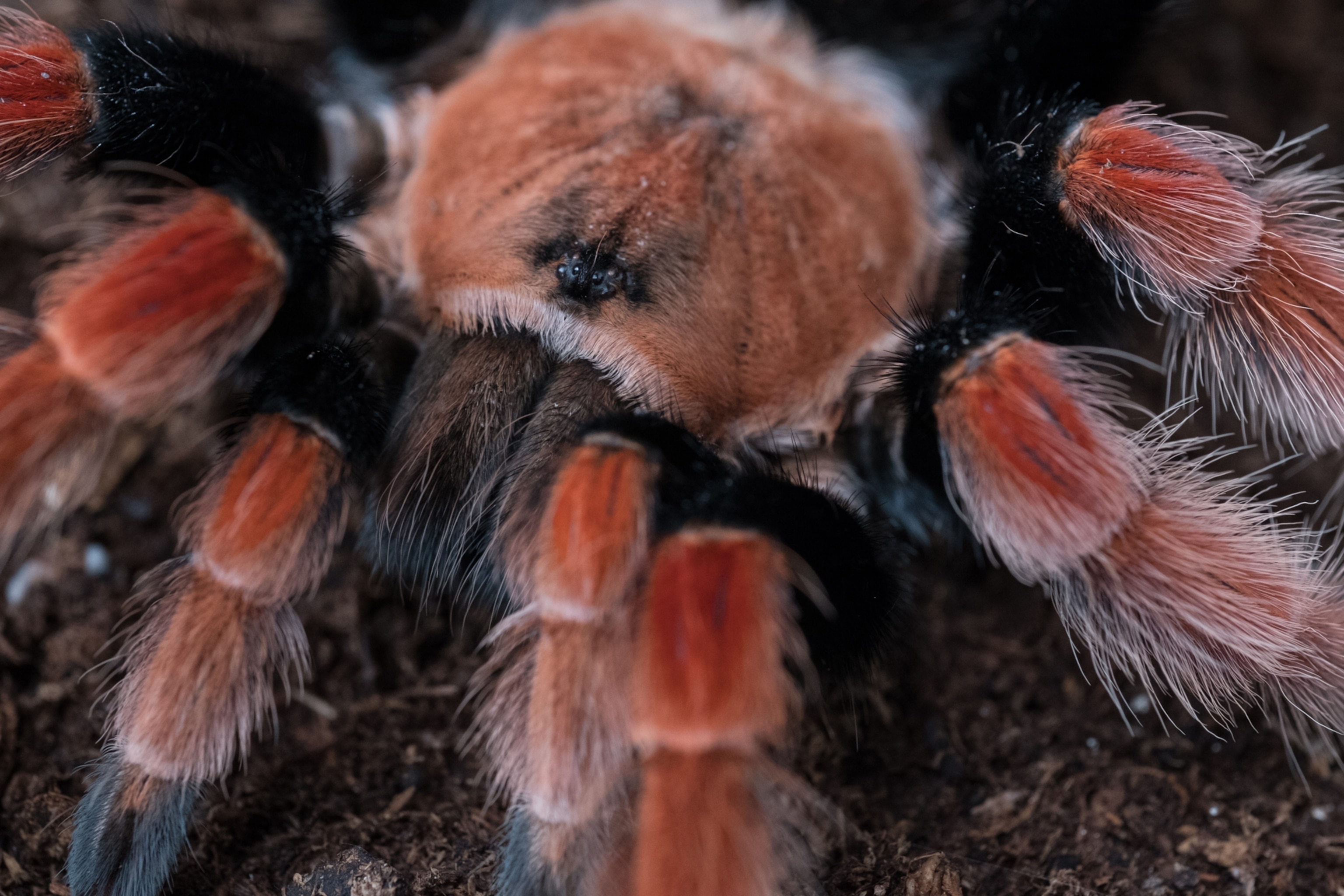 The illegal market for tarantulas is hairy business

Little studied, these spiders are the object of a booming illicit trade as pets and display pieces.

A captive-bred Mexican fireleg tarantula is seen up close outside Tarantulas of Mexico, a breeding facility in the northwestern state of Jalisco. Firelegs and other species of tarantulas are sought in the wild to be sold illegally as pets.
Photograph by Juan Pablo Ampudia

Mesmerized, fixated with horror, I’m watching a Mexican fireleg tarantula on the move. Huge, hairy, with legs the color of carrots, this one isn’t crawling around my house (phew!) but across my computer screen, in video form.

It amazes me that anyone would want to keep a fireleg tarantula for fun. But people do.

A fireleg was one of the more than $40,000 worth of spiders, insects, and other crawlies stolen from the Philadelphia Insectarium and Butterfly Pavilion in late August in a suspected attempt to sell them into the pet trade. Earlier that month, a man in Singapore was fined $12,800 for illegally keeping 92 tarantulas in his home and trying to smuggle six more—stuffed in plastic containers in the back seat of his car—into Singapore from Malaysia, according to local media.

These aren’t isolated incidents. Scientists report a significant amount of illegal activity involving tarantulas, believed to be fueled largely by hobbyists willing to pay hundreds of dollars apiece for pet spiders. According to conservation biologist Sergio Henriques, the market for preserved tarantulas is also driving the illegal trade, but to a lesser extent.

Young tarantulas crawl around a glass container at the Tarantulas of Mexico breeding facility, which is run by spider researcher and enthusiast Rodrigo Orozco. He opened the facility in 2003 hoping to shut down trafficking of wild tarantulas by flooding the market with captive-bred ones.

Containers at Tarantulas of Mexico hold hundreds of baby spiders. In addition to selling tarantulas, Orozco plans to introduce some into the wild.

Photographs by Juan Pablo Ampudia
Please be respectful of copyright. Unauthorized use is prohibited.

“Smuggling is rampant—it’s widespread globally,” says Henriques, chairman of the spider and scorpion specialist group for the International Union for the Conservation of Nature (IUCN), which assesses how animals are faring in the wild.

The illegal tarantula trade is a little known corner of the black market in wildlife, a multibillion-dollar industry that’s harming animal populations around the globe. Elephants and rhinos have been among the hardest hit, but smaller, more obscure animals are sought as pets or for use in traditional medicine and as novelty items, among other things. That includes tarantulas.

Found in tropical and desert regions worldwide, the eight-eyed arachnids are highly diverse, with more than 900 species of varying sizes and colors, from cobalt blue to salmon pink. Some live in trees, others in underground burrows.

Many nations ban or require special permits for the export of tarantulas and for the capture of certain species or species in particular areas, such as national parks. In addition, a global wildlife treaty offers some protections for 22 species deemed too vulnerable for unregulated commercial trade. But cracks in legislation—along with growing commercial interest in exotic animals, more people traveling to areas that have tarantulas, and greater awareness through social media—have fueled the illegal trade, Henriques says.

To keep up with demand, some traders hire local people to hunt tarantulas in the wild. The spiders are smuggled out, then sold to breeders or collectors looking for the newest, most colorful, or otherwise most distinctive creature. Some tarantulas are snatched, killed, and mounted in display boxes or encased in resin, a clear substance used to make key chains, paperweights, and other decorative items.

Tarantulas are especially vulnerable to poaching because they’re long-lived (some reach 30 years old), and females reproduce late and infrequently. According to Jorge Mendoza and Rodrigo Orozco, Mexican breeders and researchers, poaching has taken a toll on brachypelma, a genus found in Mexico that includes the fireleg tarantula and the popular red-kneed tarantula, known for the flame-colored spots on its legs.

It’s unclear how poaching affects most other tarantulas, but scientists fear that over-collection compounded by threats such as climate change and habitat destruction could wipe out species before there’s time to study them in the wild.

“It takes them quite a while to recover from a harvest event,” Henriques says. “They don’t bounce back quickly.”

Tarantula losses probably aren’t a top-of-mind worry for most people. It’s no secret that many people consider them one of the scariest denizens of the animal kingdom. Tarantulas are cast as the spookiest symbols of Halloween and feature in movies as killers out to get every human they come across.

There’s no good reason to fear tarantulas. Most would rather hide or even play dead than attack by biting or spraying prickly hairs from their abdomen. And if they do feel threatened enough to sink their fangs into a perceived aggressor, their venom is mostly less potent than a bee’s.

But there are very good reasons to care about them. Proteins in their venom have helped scientists understand more about pain and diseases such as epilepsy, they spin silk that hummingbirds collect to help build their nests, and they help control agricultural pests such as crickets and beetles, which they eat.

For all those who shrink from tarantulas, some folks just can’t get enough of them.

Take the members of Arachnoboards.com who refuse to name their favorite species. “I love all my babies and can’t choose,” one tarantulaphile wrote on a discussion board. “You cannot make me choose one,” wrote another.

In Naucalpan, Mexico, Raul Campos checks up on his pet red-kneed tarantula. These mild-tempered spiders have suffered losses in the wild because of the illegal trade.

Photographs by Juan Pablo Ampudia
Please be respectful of copyright. Unauthorized use is prohibited.

Or take Bob Herndon, a U.S. Fish and Wildlife Service inspector for the port of Louisville, Kentucky, and the self-proclaimed go-to law enforcement guy for all things tarantula. Herndon, 61, says he used to keep hundreds of tarantulas but now has a modest 18 he bought or received as gifts from friends who breed spiders.

He got hooked on spiders after reading Charlotte’s Web as a kid.

“To me they’re more than just animals,” he says. “They’re really beautiful creatures.”

Herndon says poaching took off in the 1970s, when people became interested in tarantulas as pets. To capitalize on demand, people began breeding tarantulas and trading them legally across borders. But this requires obtaining permits, insuring the spiders, paying for their inspection, and the like. As Herndon says, it’s cheaper and easier to flout the rules.

“It’s always been an issue, and this isn’t just for tarantulas,” he says. “Any animal, if there’s a real marketable value, there are people who don’t want to play by the rules.”

Herndon points to the gooty sapphire ornamental—an eye-catching, critically endangered metallic-blue tarantula discovered in a single locale in India in 2001. Traffickers began smuggling them to Europe where they were advertised for sale.

Then there’s the case of the psychedelic tarantula, another Indian species, touted for sale in online exotic pet markets in the U.S. and Europe a mere eight months after its discovery was described in a research journal in 2014. “I was heartbroken,” Zeeshan Mirza, a wildlife biologist who helped make the discovery, told The Hindu.

Authorities have seized tarantulas everywhere from Australia to The Netherlands to Brazil. They’ve been found stuffed inside Nintendo cartridges, hidden in shoe containers, bundled in packages of drinking straws. Many more likely slip across borders undetected: Some spiderlings are no bigger than a pencil eraser, and adult tarantulas can easily be packed in suitcases or shipping boxes.

Carol Fukushima, a researcher at the Finnish Museum of Natural History, in Helsinki, who has studied tarantulas, says snagging spider criminals may not be a high priority for law enforcement officers. “If they’re looking at bigger things they consider more important, maybe they don’t care about tarantula trafficking,” she says.

For Bob Herndon, though, understanding the tarantula trade is a mission. In January he was contacted to help open a box in Cincinnati, Ohio, after the Fish and Wildlife Service received a tip that the shipment might contain smuggled animals. The consignment, which came from the Philippines, was labeled as toys.

When Herndon opened the box, he found 17 baby tarantulas in two bottomless styrofoam cups that had been taped together. They survived and were sent to zoos in Tennessee and Kentucky.

Spiders get short shrift among scientists too. For those who choose to study them, it’s hard to secure funding to do research on an animal that’s decidedly not cute, cuddly, and relatable.

With so few resources devoted to tarantula science, Henriques says it’s difficult to figure out what’s harming them most. Fukushima, who like him wants to find out how the trade is affecting tarantulas, has launched a multiyear research project to learn everything she can about it, including the source regions, the trade routes, and details about what’s driving it.

Formerly a staff reporter for Wildlife Watch, Jani Actman is now a freelance journalist based in California.