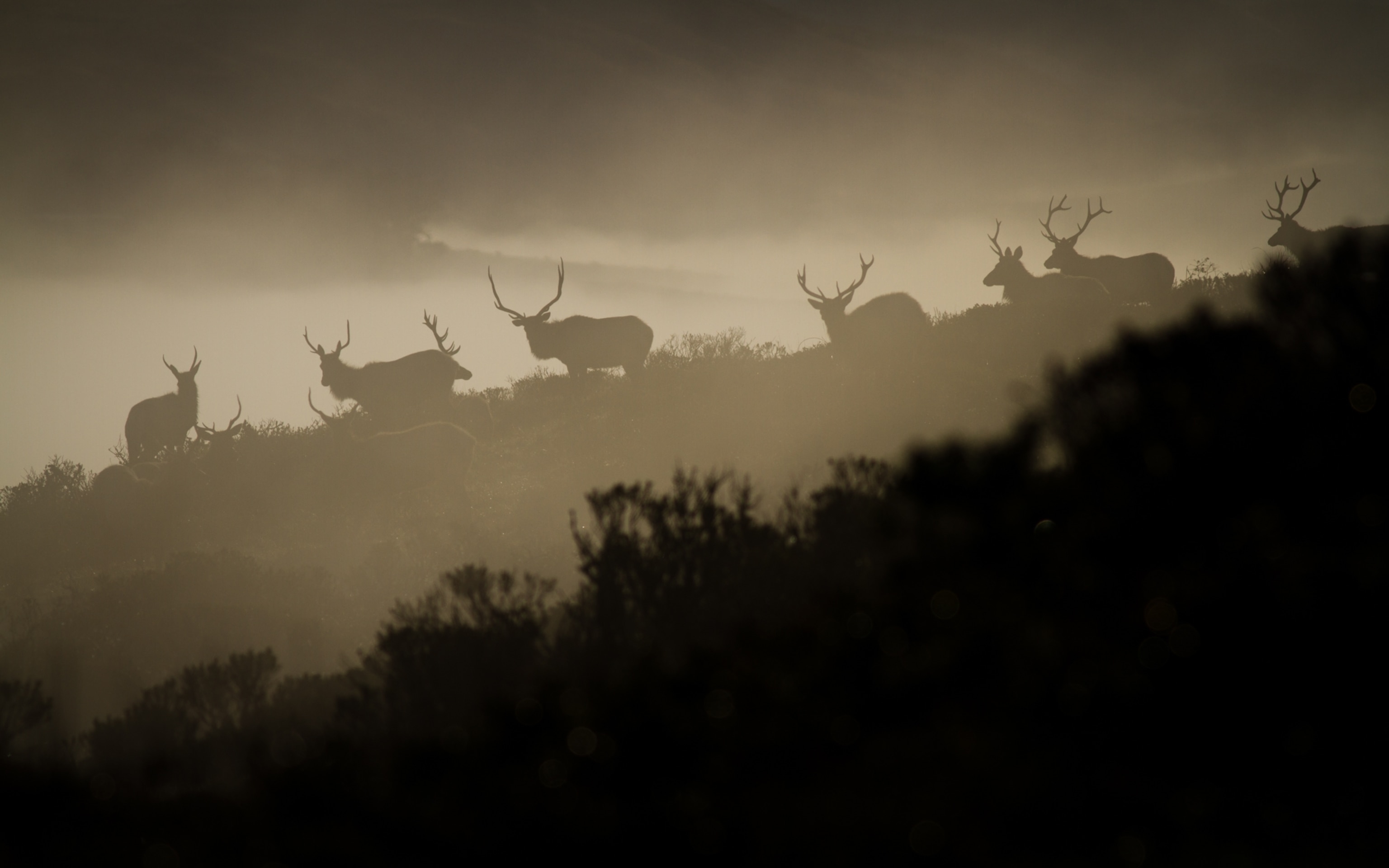 Unique elk in California may be killed under controversial plan

Tule elk, found only in California, gather in the early morning fog in Point Reyes National Seashore, which is also home to roughly 5,000 cattle. The National Park Service faces backlash from environmental groups that say its new management proposal favors ranching over wildlife.

In the story of the United States, the calamity that befell the buffalo at the hands of pioneer settlers in the mid- and late 1800s is well known: Tens of millions of the animals—lifeblood of Indigenous peoples on the Great Plains—were hunted almost to extinction.

Less well known is what was happening at the same time in California, the only home of the continent’s smallest elk—the tule elk—long a source of food and clothing for the Indigenous Coast Miwok people. Named for the tule reeds that once covered miles of streamside habitat—and distinctive for their shaggy neck ruffs, white rumps, big eyes, and loud “bugles” bulls make to show their availability during mating season—tule elk are estimated to have numbered half a million before the arrival of Europeans. By the 1870s, white colonists in California had hunted them down to no more than 10 animals.

It took more than a century of conservation efforts, including hunting restrictions and relocations, for tule elk (TOO-lee) to recover to a population of 6,000. Now 750 of them—among the largest populations in the state—are the focus of controversy and intense debate. These elk live amid the grasses, woodlands, scrub, sand dunes, and creeks of Point Reyes National Seashore, a 111-square-mile triangle of land jutting into the Pacific Ocean some 45 miles north of the Golden Gate Bridge. They share space with mountain lions, mountain beavers, bobcats, gray foxes, and black bears. Elephant seals crowd the beaches, and gray and blue whales swim by on their annual migrations. Point Reyes has more than 900 plant species, 490 birds, and 80 mammals; it has 50 federally listed threatened, rare, or endangered animals, and 50 plants.

More than 5,000 dairy and beef cattle occupy about a third of the national seashore. Dating back to the 1850s, ranching has long been a flashpoint here, with opponents arguing that privately held cattle don’t belong on public land and that they cause water pollution, habitat degradation, and wildlife disruption. Others say ranching is a historically important feature of Point Reyes National Seashore, reflecting the state’s agricultural heritage.

How to balance ranching with preservation of tule elk and other wildlife is the basis of a new management proposal from the National Park Service, the agency that administers national seashores, that has triggered heated protests by environmentalists and animal activists. A report published on September 18 lays out the potential environmental impacts of six strategies with different levels of ranching, including one that would eliminate it completely.

The park service has expressed support for an option that would allow ranching to continue—and would permit the culling of tule elk.

“This is a disaster for wildlife and a stunning mismanagement” of the seashore, said Jeff Miller, of the Center for Biological Diversity, a nonprofit environmental group, in a statement. “The plan is illegal and immoral, and we’re going to do everything we can to stop it.”

When the national seashore was designated, in 1962, some ranchers who owned land sold it to the National Park Service, and it was returned to nature. Other landowners sold their property in exchange for leases to continue ranching.

It’s unusual but not unheard of for ranching to occur on land managed by the National Park Service. In 2011, the most recent year for which data could be found, ranching was permitted in more than 13 national parks, preserves, and more—a legacy of the difficulty of taking land away from people and giving it to wild animals.

In 2012, Secretary of the Interior Ken Salazar asked the park service to pursue extending leases to beef and dairy ranches in Point Reyes National Seashore from one, five, and 10 years to 20 years. Environmental groups, led by the Center for Biological Diversity, sued, saying the park had never studied the environmental impact of ranching on the seashore as the law required.

In response, the park service began assessing the impact of six ranching options, with the intent that one would become an official part of the park service’s management plan for the seashore and the northern district of nearby Golden Gate Recreation Area.

The ranching arrangement the park service prefers is called “Alternative B,” and its proposal for managing the tule elk is at the heart of today’s controversy. Alternative B would cap the size of one of the free-ranging tule elk populations at 120 individuals and would authorize culling as needed to keep it at that size. As that herd now has 138 elk, that could mean killing 18 this year. (Watch National Geographic Explorer Filipe DeAndrade's film on the tule elk debate.)


“The park service is greenlighting the slaughter of native wildlife,” Miller said.

The Center for Biological Diversity favors an alternative that would end ranching in Point Reyes, remove the fence hemming in the northern herd, and allow free-ranging elk to expand across the park. They say it’s the only option that follows park service mandates to provide “maximum protection, restoration, and preservation of the natural environment,” as called for in Point Reyes National Seashore’s founding document.

But to keep ecosystems in balance at Point Reyes and across California, elk must be culled, says Kristin Denryter, coordinator of the elk and pronghorn program for the California Department of Fish and Wildlife.

In part, that’s because ranches—to protect their livestock—have killed off wolves, grizzlies, and other predators that otherwise would keep elk numbers to a level the land can support. And it’s because human presence hems in habitat around Point Reyes, Denryter says, the elk can’t migrate to find food and water elsewhere when times get tough. Nor can they separate and find new places to roam when their numbers grow too large.

Drought provided stark evidence of this between 2013 and 2015 when some 250 elk in the fenced herd died at the northern end of the seashore. Fearing a repeat of that event, since August activists have been demonstrating for the removal of the fence. They say the return of drought means that the confined elk lack adequate water and forage, a claim Point Reyes officials refute.

Cattle not only take space away from native plants and animals, but they degrade the land itself, says Laura Cunningham, a wildlife biologist with Western Watersheds Project, a nonprofit environmental group.

Tule elk and the grasses they depend on evolved together, and the way elk graze helps spread and protect them. “Deep-rooted native bunchgrasses hold rainwater in and grow with mosses and fungi,” stabilizing the soil, Cunningham says. Cows, on the other hand, “treat native bunch grasses as ice cream cones and eat them down to the ground.”

Cattle hooves, which have indentations that can carry seeds, introduce invasive weeds that lack deep roots and don’t retain rainwater, causing erosion, she says, and the weeds crowd out native plants, including several threatened and endangered grassland species. When it rains, cow manure washes into local streams, contaminating them with fecal coliform. This puts at risk threatened species such as Coho salmon, California red-legged frogs, and other aquatic animals.

Nonetheless, David Evans, a fourth-generation rancher at Point Reyes, says the national seashore stands as an example of how people, livestock, and wildlife can coexist. “[It] was founded with agriculture embedded into it,” he says, adding that ranchers are already doing a lot to lessen their impact on the land, such as fencing off cattle from waterways and avoiding grazing their herds on steep slopes to helping prevent erosion and reduce pollution from feces.

The park service’s preferred plan does even more, Evans says, by creating zones for different types of ranching activities and rotational grazing to allow pastures to recover. “It sets a much more robust management expectation,” he says. “It really challenges us, the ranchers—and I’m not saying all of us are happy about this—to raise the bar and be better.”

The National Park Service is expected to give final approval to its preferred plan after a 30-day waiting period, ending October 18. Environmental groups, which have said the proposal appears to violate conservation laws, have suggested they’re prepared to challenge the decision.