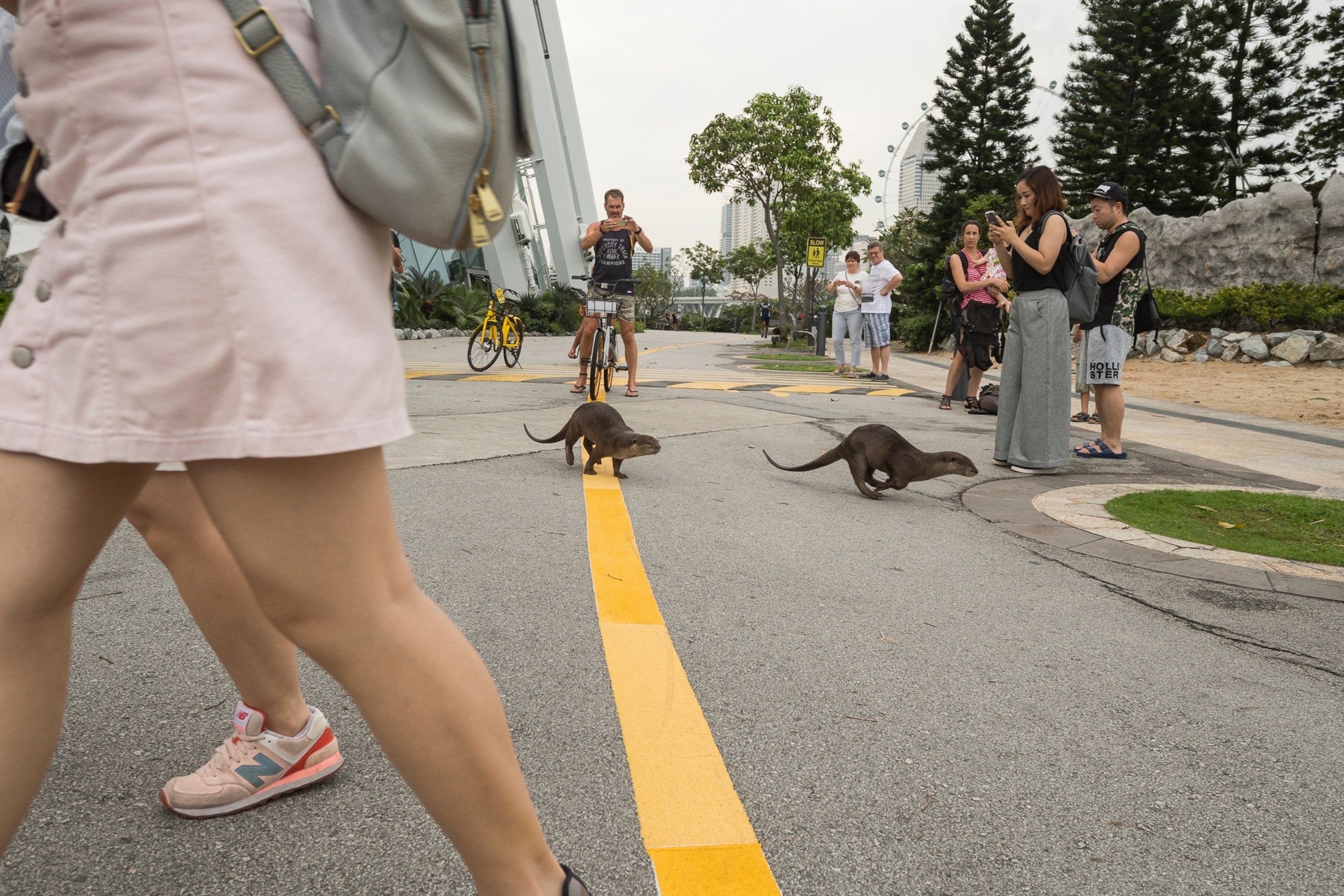 Like many urban species, the aquatic mammals are changing their behavior to fit into their new home, research shows.

Otters cross a street as tourists take their photo near Gardens by the Bay, a popular nature park in Singapore.

SingaporeOn a grassy strip along the highway, a blur of brown fur moves quickly, a small head popping up every so often to check for danger. It’s a family of seven otters, likely on their way to their den at the Singapore Botanic Gardens. Commuters sitting in evening traffic appear oblivious, likely already accustomed to seeing the charismatic mammals traipsing about this Southeast Asian metropolis of 5.7 million.

It's a far cry from 50 years ago, when Singapore’s rivers were choked with rotting animal carcasses, garbage, and sewage. Smooth-coated otters, native to the area, had disappeared and were in danger of being locally extinct. In 1977, the Singaporean government launched its Clean River Campaign, and in 1998, otters began to return to the tropical island on their own.

Otter pups stay with their parents longer than otter pups in other more rural populations.

Singapore's otter families all have names. Here, the Bishan family crosses a street in the city center.

Now at least 90 otters, part of 10 thriving families, live within the island-state, and their population is growing, thanks to rich food sources—such as koi ponds—and lack of predators. The 20-pound creatures have also adapted well to urban spaces, denning in concrete bridges and basking on patches of sand between slabs of pavement. (In one humorous incident, otters climbed up a metal maintenance ladder to exit a canal.)

But the rise of the urban otter has caused some conflicts with people. Homeowners in the gated-community enclave on the island of Sentosa reported in 2015 that their koi carp ponds had been emptied by otters, and one hotel in the same area lost 85,000 Singaporean dollars’ worth of ornamental fish over eight months, according to local news reports. In 2017, news outlets reported that an otter bit a five-year-old girl at a nature park, the Gardens by the Bay.

Despite these run-ins, the Singaporeans are generally fond of their cheeky neighbors. When asked to vote for a mascot that would represent Singapore in its 2016 National Day celebrations, citizens voted wholeheartedly for the otter. The otters also now have Facebook fan pages, including Ottercity, which was founded by photographer Jeffery Teo.

“Five years ago, people still knew very little about the otters,” Teo says. “But if you ask Singaporeans about the otters now, they could not only tell you what species they are, but which family they belong to, and how many babies the family has.” (Read how wildlife is hacking life in the city.)

As citizen interest in urban otters has deepened, so has scientific research, as biologists seek to learn how urban otters fit into such a bustling landscape.

Philip Johns, a biologist at Yale-NUS College in Singapore, is part of a team studying the urban otters and has created an app, Otter Spotter, for locals to report sightings. “It’s a really healthy population,” Johns says. “The only problem we foresee now is a lack of space for these territorial animals.”

Such research may also be crucial information for how the species—found throughout much of Asia, from India to Myanmar (Burma) to Malaysia—can adapt to new environments. Due to water pollution, habitat loss, and other factors, smooth-coated otters are considered vulnerable to extinction by the International Union for Conservation of Nature.

Otters likely repopulated Singapore by swimming across the Johor Straits from Malaysia in the 1990s. They now live all over the island—from the farming area of Kranji in the north to the manicured Singapore Botanic Gardens in the center to the glittering finance district of Marina Bay in the south.

As the sun rises from behind the baobab trees in the botanic gardens one morning, Johns points to an otter family—the same one commuting along the highway—foraging among the reeds. “They are pushing the fish toward the shoreline so the pups can learn how to catch them,” he explains.

Known to Singaporeans at the Zouk family, this tribe of otters is revealing new insights into the lives of city-dwelling otters. For instance, while otters generally are known as skilled hunters, Johns and his team have discovered that having pups dramatically lowers the adult Zouk otters’ success rate in hunting, since they have to spend a lot of their time teaching the pups to catch food. (Learn how wildlife can evolve quickly in cities.)

Additionally, the team has found that to cope with the lack of available land, the otters are changing their behavior—for instance by living with their parents longer.

While most wild otters would leave their family at around two years old, Singapore’s otters will stay with their parents until three or four, as they wait for territory to open up. “It’s like the 35-year-old living in their parents’ basement,” Johns quips.

In Singapore's Marina Bay, an otter dines on a fish.

Pups of the Bishan family, only a few months old, swim behind their relatives in search of fish.

The amount of space an otter needs depends on how much food is available, but they can maintain a large territory; one animal can travel nine miles a day. A smooth-coated otter family is made up of monogamous parents, subadults, and between four and six pups. (Read how hundreds of wild parrots have flocked to this Brazilian city.)

At the edge of the lake, two leashed dogs strain toward the Zouk family. The otters rise up out of the water, and suddenly the pups disappear. Johns signals to approach the edge of the lake. There, two pups are nestled safely among the muddy tree roots, waiting for their parents to give the all-clear.

Reunited, the family forms a v-formation as they glide across the mirrored lake.

The running of the otters

While the otters seem to have fit into their urban environment, they still face threats, natural and human-made. For starters, the mammals share the waterways with another apex predator, the water monitor lizard, which preys on otter pups.

The Singapore otters’ main cause of death is vehicle strikes, with about five to six animals killed a year, according to Bernard Seah, a member of the Otter Working Group, a coalition of charity workers, government officials, and academics who monitor the otters and carry out awareness programs.

For instance, group members place road signs and educational signs at otter hot spots, as well as attempt to manage potential conflict. In 2016, an otter family suddenly ran across the Singapore Marathon route, and Otter Working Group volunteers rushed to warn the runners of the otters’ presence, as well as also position themselves along the route to prevent the animals and runners from colliding.

The Otter Working Group’s methods—such as bringing together various types of citizens to help the otters—are now being adopted in Taiwan’s Kinmen Island and in the Malaysian capital of Kuala Lumpur, which also have burgeoning populations of urban otters.

For National University of Singapore biologist Sivasothi N, the arrival of the Singapore otter—and its popularity among residents—is a welcome development.

When the animals first reappeared in Singapore’s waterways, they were so unknown to most that “people thought that they could be beavers or seals,” says Sivasothi, who launched the website OtterWatch to help educate locals about these new inhabitants. (Learn more about Singapore’s urban innovations.)

In the early 1990s, he recalls traveling to Penang in Malaysia to study the species, walking through the mangroves for hours, hoping to spot a single otter.

Now, to do his research all he has to do is step outside his house to see the sleek, playful creatures that are doing just swimmingly in Singapore.