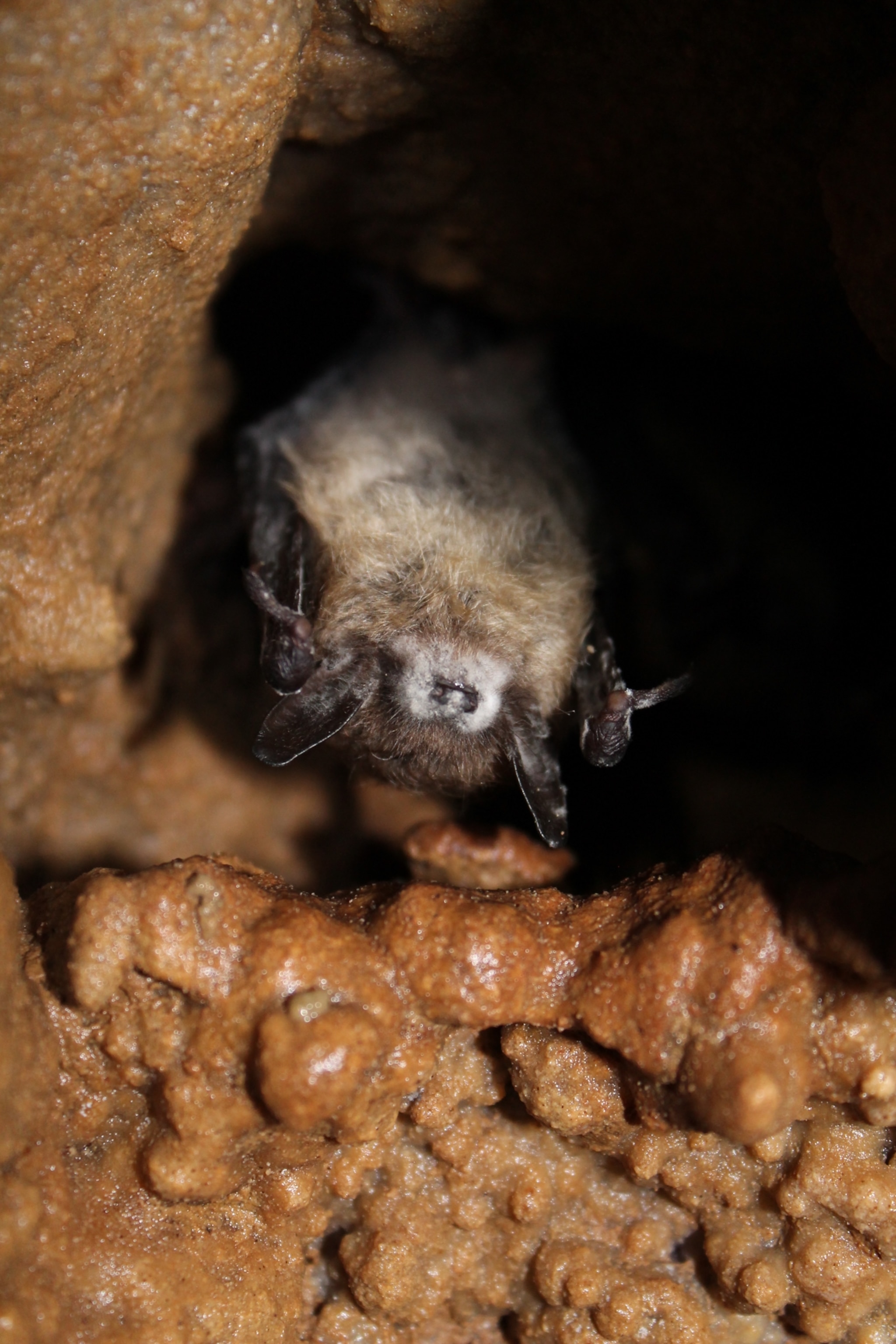 White-nose syndrome has devastated bats—but some are developing immunity

A fungal disease has wiped out bats throughout North America, but hopeful research suggests one species may be developing resistance to this pandemic.

A little brown bat displaying characteristic signs of white-nose syndrome, caused by a pathogenic fungus that has devastated bats throughout much of North America.
Photograph by Joseph R. Hoyt

North America’s bats are facing their own devastating pandemic. White-nose syndrome, a disease caused by a cold-loving fungus, has killed more than 6 million bats since it was first detected in an upstate New York cave in 2006. It threatens some species, such as the northern long-eared bat, with extinction.

The fungus, aptly named Pseudogymnoascus destructans, has since spread across the U.S. and Canada—carried both by the routine movements of bats and by hitchhiking on cave-curious humans. In its wake, white-nose syndrome has left carnage: Upwards of 90 percent of some regional bat populations have been wiped out.

“White-nose is so much worse for bats than coronaviruses are to humans,” says Kate Langwig, a conservation biologist at Virginia Tech, in Blacksburg, Virginia. “This would kind of be our worst nightmare for a pathogen.” Langwig explains that P. destructans can survive in a cave for more than 10 years without any hosts present, and that the accompanying disease causes “crazy high mortality.”

But a spark of hope is glowing inside North American caves. Populations of little brown bats, a formerly abundant species that’s experienced the most dramatic losses from the disease, seem to be stabilizing in some places affected early on in the epidemic, including parts of New York state and New England.

Recent research shows these survivors have detectable differences in their DNA compared to bats that have died, involving genes related to metabolism and hibernation, which may help them withstand the infection. These findings provide hope for bats, and for a field greatly in need of encouraging news.

“Evolution against this disease is happening very quickly in bat populations,” says Sarah Gignoux-Wolfsohn, a disease ecologist at the Smithsonian Environmental Research Center, in Edgewater, Maryland. “It's something that’s happening in our lifetime, in the last 10 years, right here in the northeast U.S.”

“We've been battling [white-nose syndrome] for so long that I think some people start to feel really hopeless … and that’s when people kind of give up,” says Amanda Adams, the conservation research manager for Bat Conservation International. “So, any new evidence that comes out that can support being hopeful, that can be really powerful.”

How does white-nose hurt bats?

P. destructans infects bats as they encounter it in caves, and can cause wing lesions and white fuzzy marks on the head and face. But white-nose actually kills by causing bats to awaken from hibernation in winter, ramping up energy use and depleting fat reserves. Without any insects for the bats to eat in the cold, victims starve.

The fungus has been found in caves infecting bats nationwide. It is most established in the East and Midwest but has spread to the Mountain West as well, and there are islands of confirmed infection as far as Washington and California.

More commonly, though, white-nose means no bats at all: Researchers have often gone into caves and found them empty. The absent bats likely die on the landscape after leaving their winter hibernation sites in search of food or are eaten by scavengers before they’re found. So far, 12 bat species in North America have been confirmed to be susceptible to white-nose syndrome.

“For some species, we really strongly suspect they're going to go extinct,” Langwig says. The northern long-eared bat, for example, seems particularly vulnerable, disappearing entirely from areas where white-nose syndrome has been present for only a few years. “Other species, I'd say, we just don't have enough data.”

P. destructans originated in Eurasia, where it infects bats but doesn’t result in mass die-offs as in North America. Scientists aren’t yet sure what accounts for the difference, but it’s likely a combination of factors: millennia of coevolution and subtle ecological differences.

“It’s possible, millions of years ago, [Eurasian bats] went through the same thing that we’re seeing now. We just weren’t there to document it,” says Adams.

Langwig and her colleagues’ previous research has demonstrated Asian bats carry lesser fungal loads than their U.S. counterparts, suggesting the bats themselves may be resistant to fungal growth. In a 2020 follow-up study, scientists found less fungus growing in Eurasian caves compared with North American ones, especially in early winter. Langwig says this means bats in Europe and Asia get infected later and become less sick during winter hibernation.

At four hibernation sites surveyed in New York between 2006 and 2017, researchers reported populations were increasing from their pandemic lows, and had risen back to between five and 30 percent of their previous numbers. In Vermont, where more than three-quarters of the bat population was lost between 2008 and 2011, biologists have counted slowly increasing populations since 2012. These local population rebounds could be the product of genetic selection, according to an emerging body of research.

Survivors of white-nose in New York and New Jersey have detectable genetic features that set them apart from bats who’ve died of the disease, according to a recent study published in the journal Molecular Ecology. The research builds on previous work, including a 2020 study which found similar results in Michigan, and a 2017 study looking at bats in Eastern Canada.

Researchers in the most recently published work sequenced the entire genomes of 132 bats. The scientists gathered genetic material by taking small, harmless wing punches from living bats, and returning them to their cave—or by collecting the bodies of the already dead. In doing so, they identified 63 unique genetic variations, called single nucleotide polymorphisms (SNPs), more common in survivors than in bats who died with the fungus.

Little brown bats are slow reproducers. Each mature female only has about one pup annually. They’re also remarkably long-lived for such small mammals, living upwards of 30 years in the wild. This means that some of the bats included in the genetic sequencing, and all the beneficial gene variants detected, likely predate the emergence of white-nose syndrome.

To figure out how these variations may help bats withstand infection, Gignoux-Wolfsohn searched each section of code in genetic databases and pinpointed her observations on previously mapped genomes of bats and other animals (like ground squirrels and mice).

“Our initial hypothesis was that we were going to see changes in immune-related genes,” she says. But only one of those observed changes was an immune gene. All the rest that could be identified were related to hibernation and metabolism.

Because a key feature of white-nose syndrome is disrupted hibernation, the finding wasn’t entirely inexplicable. One 2019 study reported that northeastern U.S. bats now enter hibernation storing significantly more fat than they did before the fungal invasion. It’s logical that surviving bats would be better at fat storage or exhibit altered hibernation behavior and physiology, says Gignoux-Wolfsohn.

The new 2021 results complement the previously published study of Michigan bats, which also found genetic markers related to metabolism and hibernation in surviving bats. One true surprise of this 2020 research, though, were changes detected in the FOXP2 gene, which is related to language processing in humans, according to Giorgia Auteri, lead study author and University of Michigan graduate student. She explains that FOXP2 is linked to vocalizations and echolocation in bats, but that it could also have other functions yet unknown to science. “I think it highlights how complex genetics are.”

But at least one study using different methods found conflicting results. A  2020 paper concludes there were “no population-wide signs of selection,” in response to white-nose syndrome in their sampled bat populations. The different result could be because this third study used a “more conservative” approach by pooling bat genetic information together instead of sequencing each individual bat’s genome as part of analysis, said lead author Thomas Lilley, a biologist at University of Helsinki, in Finland, in an email. It’s also feasible that different bat populations are responding to the disease in different ways.

“We need to do more work to actually link … phenotypic changes or behavioral changes” with their genetic underpinnings, says Gignoux-Wolfsohn. “But this is the first step towards that, because now we know which genes to look at.”

While little brown bats may be evolving on their own, researchers say it doesn’t reduce the need for continued conservation efforts. So far, similar population rebounds and genetic shifts haven’t been detected in any of the other bat species imperiled by white-nose syndrome, and the fungus continues to spread.

Little brown bats and big brown bats are relatively common species across the US, or at least were prior to white-nose. But many others are rarer, like the Indiana bat and tricolored bat. So, finding enough of these individuals “to understand what is enabling them to survive, or if they are surviving, is just a huge challenge,” Langwig says.

But now that the fungus is so widespread, more recent methods being researched include vaccine development, spraying caves with fungicide, and habitat improvement to help remaining colonies. One project Adams is directly working on are “bug buffets,” lures to attract more insects near caves to increase bat food availability right before hibernation.

Yet all these methods are costly and inefficient: requiring the access, investment, and people power to treat hibernation sites individually. Gignoux-Wolfsohn hopes her research can help researchers decide where and how to apply these tools to help the most vulnerable sites and species.

Regardless, the hopeful glimmer of genetic resistance in little brown bats is a welcome sign in the bat world. Knowing resistance is possible will also make it easier to “justify spending some money and effort in the short term,” says Auteri, “knowing that in the long run, this population might survive.”