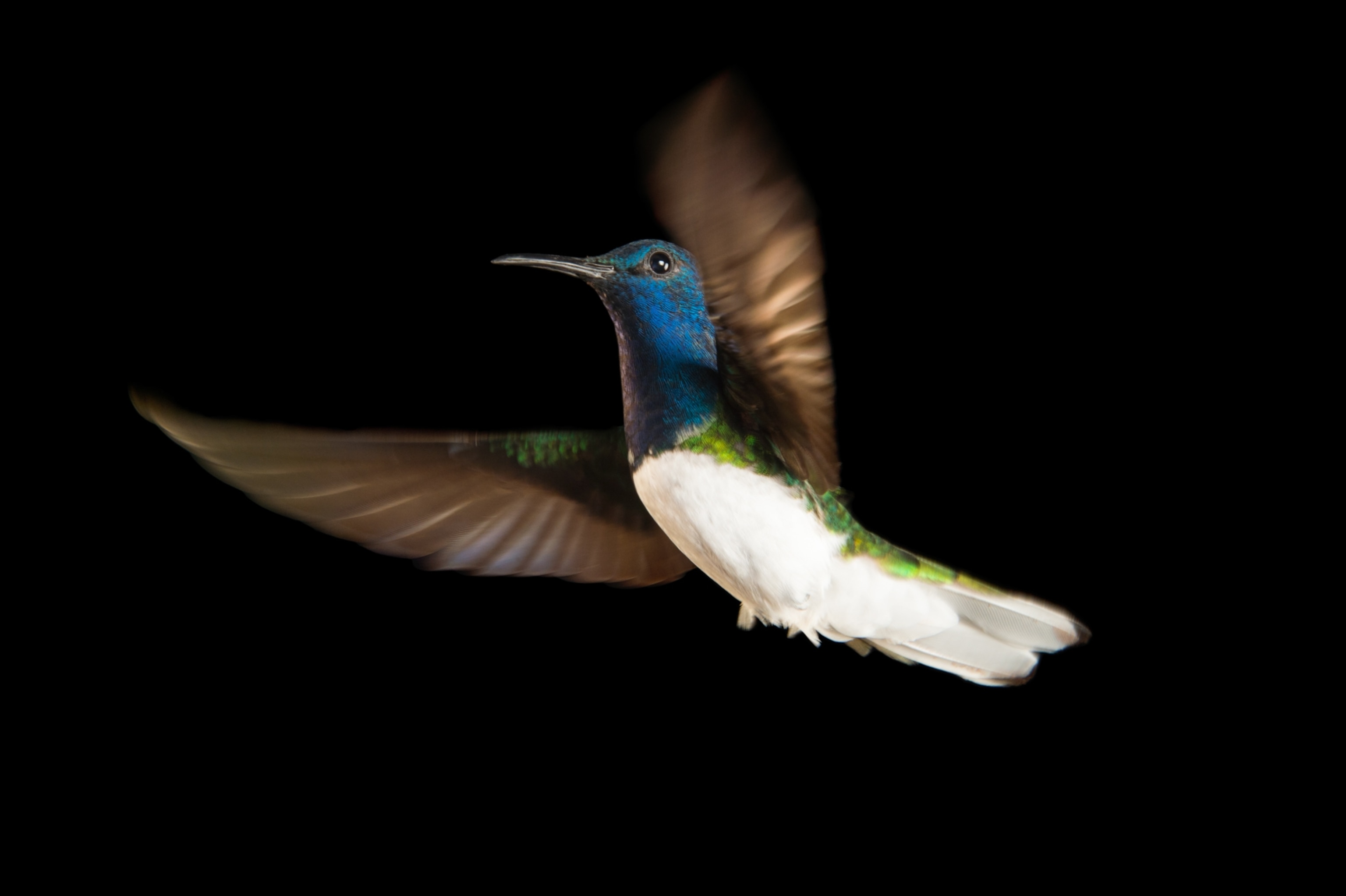 Why some female hummingbirds masquerade as males

In birds, males are often the ones to sport showy, colorful feathers—the better to attract and entice females. It’s peacocks, not peahens, that get to fan out flamboyant blue-and-green tails. Male cardinals get bright red plumage, while females are pale brown. And the male white-necked jacobin, a tiny tropical hummingbird, has a deep blue head and vibrant green back, whereas females are generally drab.

But not always. Researchers studying white-necked jacobins in Panama noticed that nearly 30 percent of the more than 120 females they captured and sexed between 2015 and 2019 turned out to be females that looked like males.

A study published today in Current Biology sheds light on why. It turns out that mimicking male coloration helps female white-necked jacobins avoid social harassment from other hummingbirds while feeding.

“The [bright] coloration on the bird is associated with aggression,” says Jay Falk, an evolutionary ecologist at the University of Washington and the study’s lead author. “Just looking like males seems to deter bullies,” allowing females better access to nectar. (See the amazing maneuvers of a hummingbird in flight—in slow motion.)

This research shines light on the seldom-quantified role of ornamentation in female birds, but it also increases awareness of evolutionary forces that serve a social function rather than a sexual one, says evolutionary biologist Sara Lipshutz, at Indiana University, who wasn’t involved in this study.

Research has long focused on the evolution of flamboyant features in male animals, from gaudy colors to exaggerated horns, tails, and wattles. The role of such ornamentation in females, albeit not as widespread, remained largely overlooked until about two decades ago. The early view, favored by Darwin, was that these traits didn’t serve a real purpose in females and instead were carried over from males as the two sexes share majority of the genetic code.

“This older idea completely ignored the agency of females,” Lipshutz says. But since then, a growing body of research has indicated that ornamented females of some species, including birds, fish, and other taxa, use their appearance to compete both for better mates and resources.

In hummingbirds, recent research found that a small proportion of females in 47 species of 209 examined in museums resembled their male counterparts, suggesting it’s more common than scientists realized. (Read about how hummingbirds can see colors humans can't even imagine.)

White-necked jacobins were among those 47 species. Falk and his colleagues wondered if the male-lookalike female jacobins were trying to attract mates by standing out from the drab females, or if they were competing with each other for nectar. But first, they wanted to know if the ornamented females were prevalent at Falk’s field site in the small Panamanian town of Gamboa. By setting out bird trapping nets between 2015 and 2019, they found nearly 30 percent of the more than 120 white-necked jacobin females they captured, both adult and juvenile, were masquerading as males.

“Juveniles looking like [adult] males—that came as a huge surprise,” Falk says. “That’s just not something you typically see in birds.”

The unexpected find helped his team rule out sexual selection as the evolutionary force maintaining male-like ornamented plumage in adult females. That’s because jacobins sported showy colors even prior to reaching reproductive age and that appearance became less prevalent among adult females—most females shed the flashy feathers to put on dull ones as they matured, though about 20 percent of the adult females maintained their male-like coloration. (See photos that show the dazzling evolution of bird feathers.)

Researchers also found that male jacobins preferred to court and mate with dull females, suggesting that being brightly colored doesn’t give females any advantage in wooing a mate.

Falk and his colleagues turned to their next hypothesis: resource competition. They fit electronic trackers to nearly 150 jacobins, 15 of which were male-like females, and logged their visits to 28 feeders. Over 278 days the male-mimicking females frequented the feeders more often and spent longer durations feeding than the drab females.

To understand why the ornamented females were more successful, Falk observed interactions between jacobins visiting feeders and three types of dummy jacobins mounted on them: drab females, ornamented male-like females, and males. The dummy birds bore the wrath of aggression in the form of pecks and slams that Falk recorded. Drab female mounts received much more aggression from visiting jacobins and other hummingbird species than the male-lookalike dummies. Also, video surveillance showed that live drab females typically got chased away by visitors more often than the ornamented females.

“It suggests that when you’re ornamented and feeding at these feeders, you get harassed less,” says co-author Dustin Rubenstein, an evolutionary ecologist at Columbia University and a National Geographic Explorer.

With such benefits, why don’t all females develop ornamentation? Flamboyant plumage is not just high maintenance, but it’s also risky. Female hummingbirds are solo parents, which is already energy-demanding. On top of that, “if you’re brightly colored and sitting on a brown nest in a green tree, you’re going to stand out,” Rubenstein says. “It’s much more easy to be eaten.”

As for the flashy jacobin juveniles, their coloration likely brings the same benefits as flashy females, helping them avoid harassment and overcome competition for nectar. “Survival can be really low at this life stage,” Falk says. “Their whole job as a juvenile is to make it to the next year so that they can reproduce.”