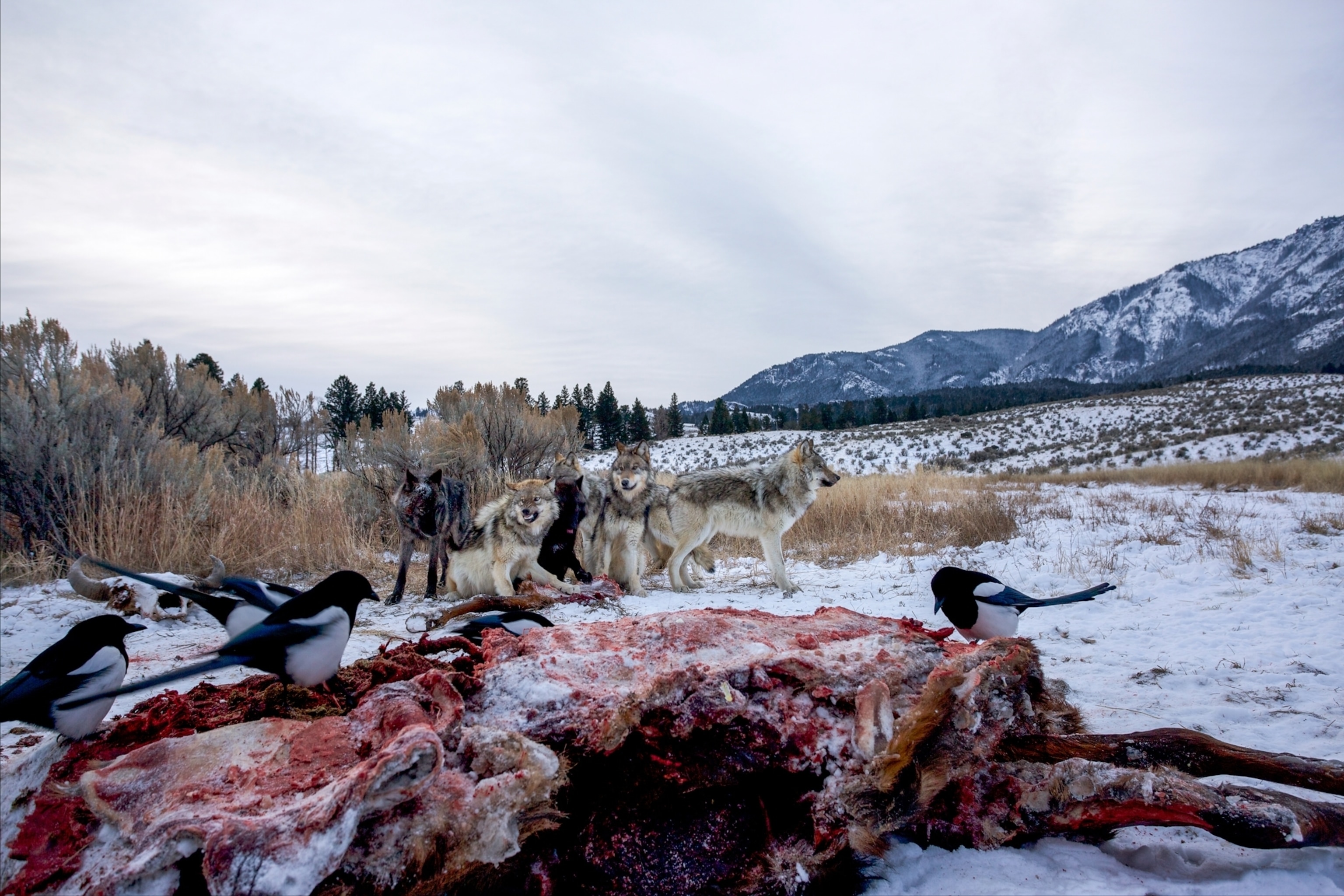 25 years after returning to Yellowstone, wolves have helped stabilize the ecosystem

New research shows that by reducing populations and thinning out weak and sick animals, wolves have a role in creating resilient elk herds.

Wolves and black-billed magpies scavenge at a dump where carcasses are stored in Yellowstone National Park.

Laramie, WyomingTwenty-five years after gray wolves returned to Yellowstone National Park, the predators that some feared would wipe out elk have instead proved to be more of a stabilizing force. New research shows that by reducing populations and thinning out weak and sick animals, wolves are helping create more resilient elk herds.

For the past 12 years, elk numbers in the park’s largest herd have leveled off between about 6,000 and 8,000, instead of extreme boom-and-bust cycles due to climate fluctuations.

During years with normal amounts of rain and snow, wolves primarily kill older cow elk, since they’re the easiest to hunt. But Wilmers led a recent study that showed during particularly dry years—when grass, shrubs, and wildflowers aren’t as lush—wolves switch to hunting bulls. These burly males already don’t eat much in the fall, focusing instead on making deafening bugles and smashing into each other while fighting over cows. All that effort burns calories, weakening them heading into winter. In dry years, they’re even more diminished.

As adaptable, intelligent predators, wolves have learned to recognize these conditions, and they would rather kill an undernourished 750-pound bull versus a 450-pound cow. So by targeting bulls during years of scarce food, they give the cows a chance to reproduce, thus keeping the population afloat. (Explore the Yellowstone most don’t see.)

But most importantly, the Yellowstone area’s wolves—which now number between 300 and 350—could help elk herds weather the perils of a more volatile climate, according to the study, published in the Journal of Animal Ecology. For instance, elk herds that maintain consistent numbers, rather than yo-yoing up and down, can better withstand more frequent droughts—one impact of climate change that is already occurring in the region.

“In a future that will be very unpredictable, we want a buffer” against mass die-offs, says Doug Smith, Yellowstone’s senior wildlife biologist, and wolves’ ability to keep elk herds balanced can play that role. Through hunting and management practices, “humans help stabilize elk populations, but they don’t do the same thing as wolves.”

Wolves from the Junction Butte pack feed on an elk in Yellowstone's Lamar Valley.

A female elk tends to her wounds after narrow escaping a pack of wolves in Lamar Valley.

The findings in Yellowstone are also relevant, he adds, as Coloradans vote in November whether to reintroduce wolves to their state, home to about 287,000 elk—the largest number in the U.S.

For their study, Wilmers, Smith, and colleagues analyzed more than a thousand dead elk in Yellowstone—located in the states of Wyoming, Montana, and Idaho—over 20 years. The scientists spent about a month at the beginning and end of each winter tracking three wolf packs, locating every elk kill the wolves made; recording the dead animal’s age and sex; and removing a bone marrow sample, which determined the elk’s physical condition before death. The team then used satellite data to derive how much plant life was available for elk to eat each year, an amount dependent on snowmelt and rainfall.

Synthesizing all of that data revealed that wolves target bulls during years when vegetation is poor, offering a clearer understanding of how shifts in climate can change predators’ behaviors.

This is especially useful for managing and conserving wolves, which are still rebuilding their numbers after over a century of persecution. Before the 1900s, Yellowstone predators such as grizzly bears, black bears, wolves, and mountain lions thrived alongside robust populations of American bison, elk, mule deer, pronghorn, and bighorn sheep.

But a coordinated campaign by the federal government exterminated almost all those predators, and bison, from the area. The last known Yellowstone wolf pack was killed in 1926, and the canines were also wiped out in most of their historic range in much of the lower 48, hanging on in a few populations around the Great Lakes. (Read more about the history of Yellowstone National Park.)

With the wolves gone, and bears and lions greatly diminished, elk populations skyrocketed. Between 1932 and 1968, the U.S. National Park Service and the state of Montana removed more than 70,000 elk from the Northern Yellowstone herd by killing them or shipping them across the country to areas where they’d been eliminated.

When the park stopped killing elk in 1968, numbers shot up again from about 5,000 to close to 20,000. For the next several decades, elk cycled through population booms and collapses along with climate fluctuations; hard winters left the ground littered with hundreds of the carcasses of elk that had starved to death. Then, between 1995 and 1997, wildlife officials reintroduced 41 wolves to Yellowstone. Grizzly bears and mountain lions, which also prey on elk, increased due to more protections from states and the federal government. The elk population dropped, eventually evening out the spikes and dips.

In the winter of 2010 to 2011, for instance, elk fared relatively well during abnormally deep snow and cold temperatures, compared with the mass deaths seen during similar winters in the 1980s and 1990s, Smith says. (Read about the threatened species bouncing back in Yellowstone.)

Lessons for other states

As November’s ballot initiative looms, researchers are using the 25 years of data to predict what might happen if the predators return to Colorado or any other U.S. state within the species’ historic range. Some groups are pushing to reintroduce more Mexican wolves, a gray wolf subspecies, into their former habitats of New Mexico and Arizona.

So far, there are more questions than answers. While the Yellowstone area is vast and sparsely populated, much of Colorado is not—which means where wolves would be reintroduced, how many would be allowed to roam the mountains, and how much humans would tolerate their presence are all potential challenges, says Joanna Lambert, an environmental studies professor at the University of Colorado Boulder and scientific advisor for the Rocky Mountain Wolf Project, which advocates for wolf reintroduction. (See 12 of our favorite wolf photos.)

State officials would manage the wolves, unlike packs reintroduced into Yellowstone, which were managed federally. This means that wolves that wandered outside Yellowstone Park were largely prohibited from being killed, particularly early in the reintroduction. Colorado would likely not have similar restrictions.

But one takeaway from Yellowstone is clear, Lambert says: Wolves will certainly eat some of Colorado’s abundant elk.

If wolves are reintroduced, she expects the state’s herds will be “leaner, meaner, and healthier.”