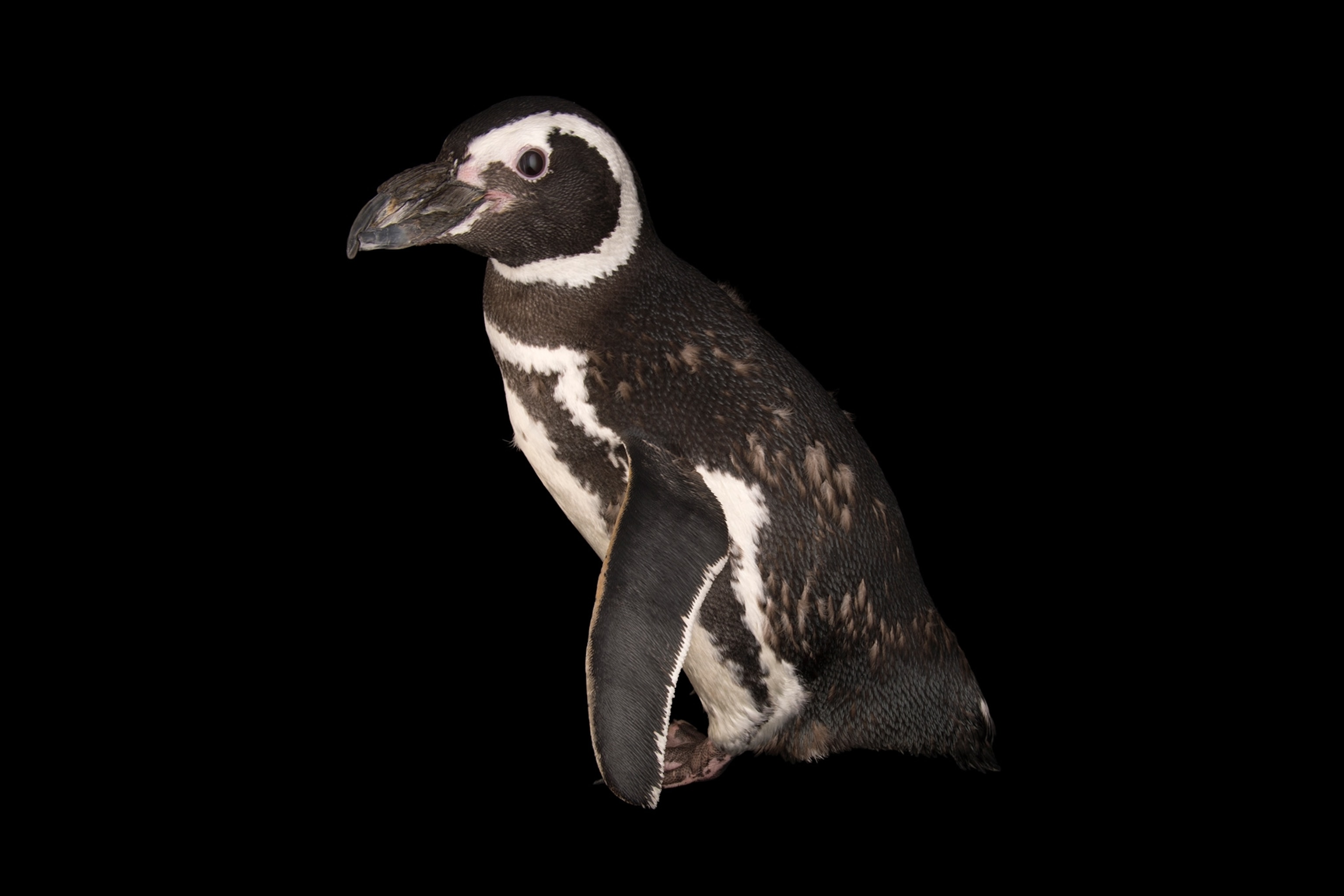 Magellanic penguins are among the many species of penguin facing serious threats to their survival, including chronic oil pollution and climate change.
Photograph by Joel Sartore, National Geographic Photo Ark

What is the Magellanic penguin?

The Magellanic penguin is named for the Portuguese explorer Ferdinand Magellan, whose crew spotted it while sailing around the tip of South America during their historic, if controversial, attempt to circumnavigate the world in 1519. This flightless seabird can be found on both the Atlantic and Pacific sides of the continent, mainly in Argentina, Chile, and the Falkland Islands.

One of 18 penguin species, the Magellanic penguin is known for its black body and white belly, countershading that helps it avoid predators while swimming. When seen from above, a penguin’s black back blends into the dark ocean, and from below, its white stomach is camouflaged by the light from the sky. Penguins’ bodies are ideal for swimming, thanks to their streamlined body shape that tapers at both ends, webbed feet, and long flippers that help them paddle. Oily feathers also keep penguins warm.

Magellanic penguins do have distinct markings that can differentiate them from their relatives. Two black bands run across their white bellies: One thick black stripe encircles their necks while another line of black feathers forms an arc that rises to the top of their chests and back down to their feet. Magellanic penguins also have a stretch of white feathers that swoops down from each eye, joining to form a strap around the neck.

Magellanic penguins are creatures of habit. Not only do they typically mate for life, but these penguins also return to the same nesting site from which they hatched during each breeding season, which runs from September to mid-April. Colonies of penguins generally settle in coastal areas and look to build their nests in spots where shrubs and other vegetation can provide protective cover.

Male penguins arrive to the habitat first to claim their nesting site, also known as a burrow, while females arrive a few days later. Laying an average of two eggs per breeding season, these penguins raise their chicks together in the nest until they are old enough to forage on their own. Magellanic penguins forage in the ocean, typically remaining on the continental shelf in Argentina. They eat mainly small fish like anchovies, sardines, and sprats.

Once the breeding season has ended, Magellanic penguins migrate north for the winter to the more seasonable climes of Peru and Brazil, where they can generally be found swimming hundreds of miles off the coast. For some, this migratory trip can be as long as 4,000 miles.

Magellanic penguins are one of the many species of penguin facing serious threats to their survival. Chronic oil pollution—including both accidental and intentional releases of oil from tankers during ocean transport—was among the earliest threats they faced. According to the IUCN Red List, it’s been estimated that oil pollution killed more than 20,000 adult Magellanic penguins and 22,000 juveniles in the 1980s and early 1990s.

Fisheries pose another threat to these seabirds. Magellanic penguins have been known to get caught and drown in gillnets, a type of net that hangs vertically in the water and is designed to trap fish by their gills. It’s also become harder for these penguins to forage for food as they compete with fisheries for anchovies and young hake.

Finally, climate change is affecting Magellanic penguins as well. Chicks in particular suffer when the heavy rains associated with extreme weather flood or collapse their burrows. Losing that protection often causes hypothermia or death. There’s also evidence that warming ocean waters is making it harder for penguins to find food as their prey seek cooler waters.

Fortunately, there are a number of projects under way that aim to ensure the continued survival of the Magellanic penguin. Researchers are studying the effects of fisheries and the hydrocarbon industry, while conservation groups are pushing for greater protection of their habitat.

In 2015, UNESCO established a biosphere reserve along the Argentinean coastline that hosts the largest colony of Magellanic penguins in the world. Pablo Garcia Borboroglu, founder and director of the Global Penguin Society, led efforts to create that 3.1 million hectare Patagonian reserve. In 2018, National Geographic awarded him the Buffett Award for Leadership in Latin American Conservation for his work.

February 27, 2009—Microchip-implanted Magellanic penguins in Argentina have helped scientists research the threats to their colonies by just doing what comes naturally.