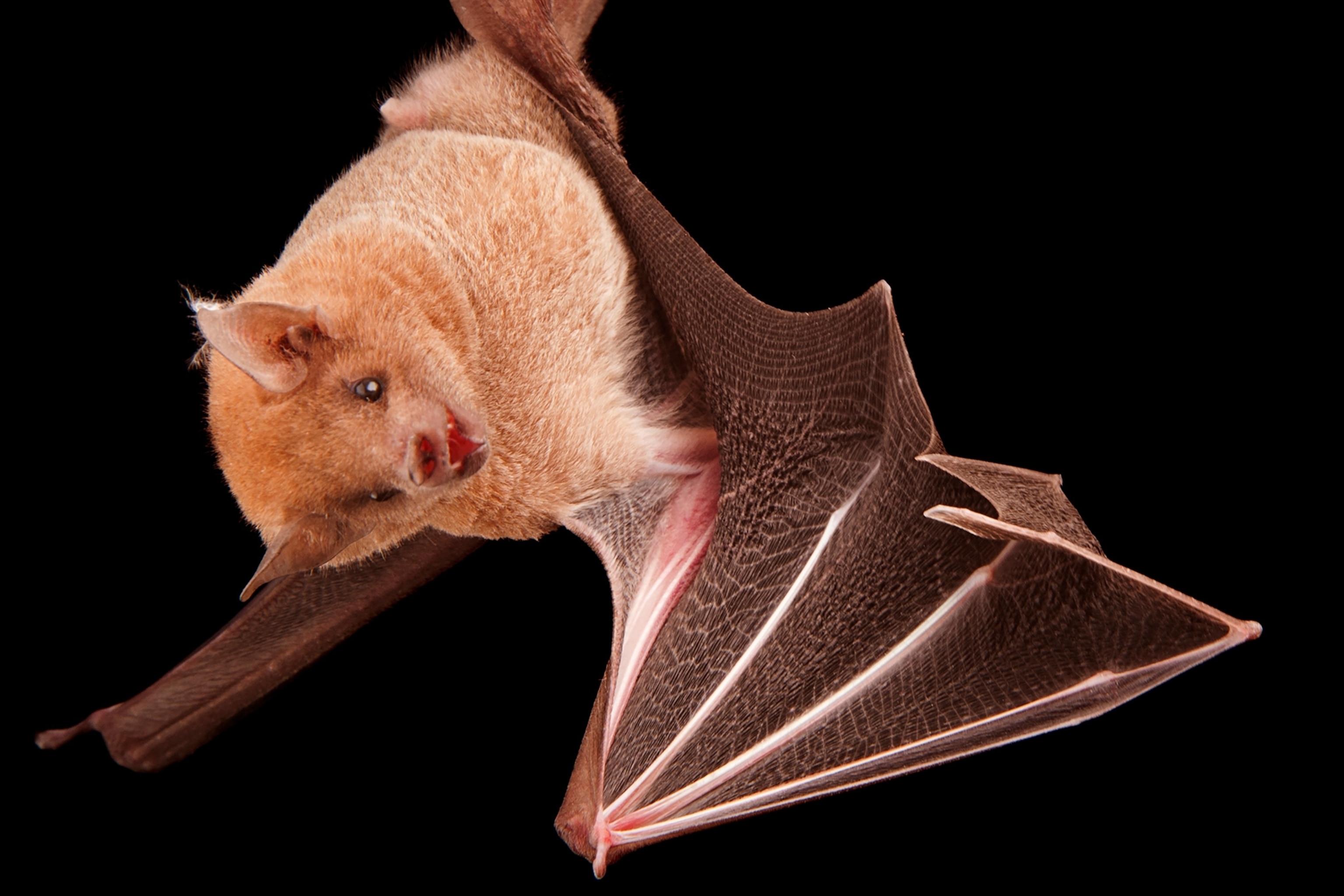 What is the lesser long-nosed bat?

Lesser long-nosed bats play an important and unique role in maintaining the desert ecosystem of northern Mexico and the southwestern United States. As one of three bat species in North America that feed on nectar, these mammals are responsible for pollinating cacti and agave plants across the region. And it's not just the plants that benefit: Bat pollination is critical to the blue agave plants from which tequila is made—a fact that just may save this endangered species.

This bat species is part of the leaf-nosed bat family, meaning they have a triangular flap of tissue shaped like a leaf at the end of their noses. Those noses help them detect the scent of blooming flowers, but it’s their impressive tongues that make lesser long-nosed bats such valuable pollinators: Measuring about three inches, approximately the same length as their bodies, these tongues help the bats reach the bottom of flowers where the nectar is stored. As they feast, their bodies—covered in fine yellow-brown or gray hairs—become coated in pollen that later cross-pollinates the next flower upon which the bats feed.

Lesser long-nosed bats are migratory animals. They spend the winter in central Mexico then follow the scent of blooming flowers—often called the "nectar trail"—as far north as southern Arizona and New Mexico. They can also be found in the Sonoran Desert and throughout Mexico.

While they travel, these bats gather by the thousands in roosts where they rest and birth their young. Roosts must have the right temperature and humidity level to accommodate the sensitive creatures, so they generally return to the same spots each year—often caves or abandoned mine tunnels. After a night of searching for nectar, mother bats return to the roost to feed their babies using what National Geographic explorer Begoña Iñarritu describes as a multi-sensory process to seek out and identify their babies in the dark.

In 1988, the U.S. Fish and Wildlife Service listed lesser long-nosed bats as an endangered species under the Endangered Species Act. They faced many threats to their survival: Drug and human-traffickers began using their caves, frightening them and in some cases killing them. They were also collateral damage in Mexico's culling of vampire bats, which can transmit rabies. And, finally, cacti and agave flowers became harder to find as tequila makers cut bats out of the equation by using clones to grow blue agave plants rather than allowing pollination. By the time they were added to the list, only about a thousand bats remained.

While tequila production may have threatened the lives of lesser long-nosed bats, it’s also playing a role in bringing them back from the brink. Rodrigo Medellín—an ecologist, conservationist, and National Geographic Explorer-at-Large—has been working for decades to save the lesser long-nosed bat by leveraging its tequila connections. Dubbed the "Bat Man of Mexico," Medellín convinced agave farmers to set aside part of their land to allow the plants there to flower and be pollinated. He also worked with a nonprofit to establish a "bat-friendly" certification for tequila brands.

Those efforts have begun to pay off. In 2015, Mexico removed the lesser long-nosed bat from its endangered species list, and the U.S. followed suit three years later—the first time a bat species had ever been delisted from the Endangered Species Act. The U.S. Fish and Wildlife Service estimated at the time that the population of lesser long-nosed bats had risen to about 200,000 bats, in at least 75 roosts between the U.S. and Mexico.

But that doesn’t mean these bats are in the clear. Lesser long-nosed bats are still listed as "near threatened" on the International Union for Conservation of Nature's Red List. Advocates point out that conservation efforts must be sustained over the long term to ensure the continued recovery of the lesser long-nosed bat.

If you like tequila—you owe it to the bats. Lesser long-nosed bats pollinate several plants, including agave, the single plant species from which Mexican tequila is produced.