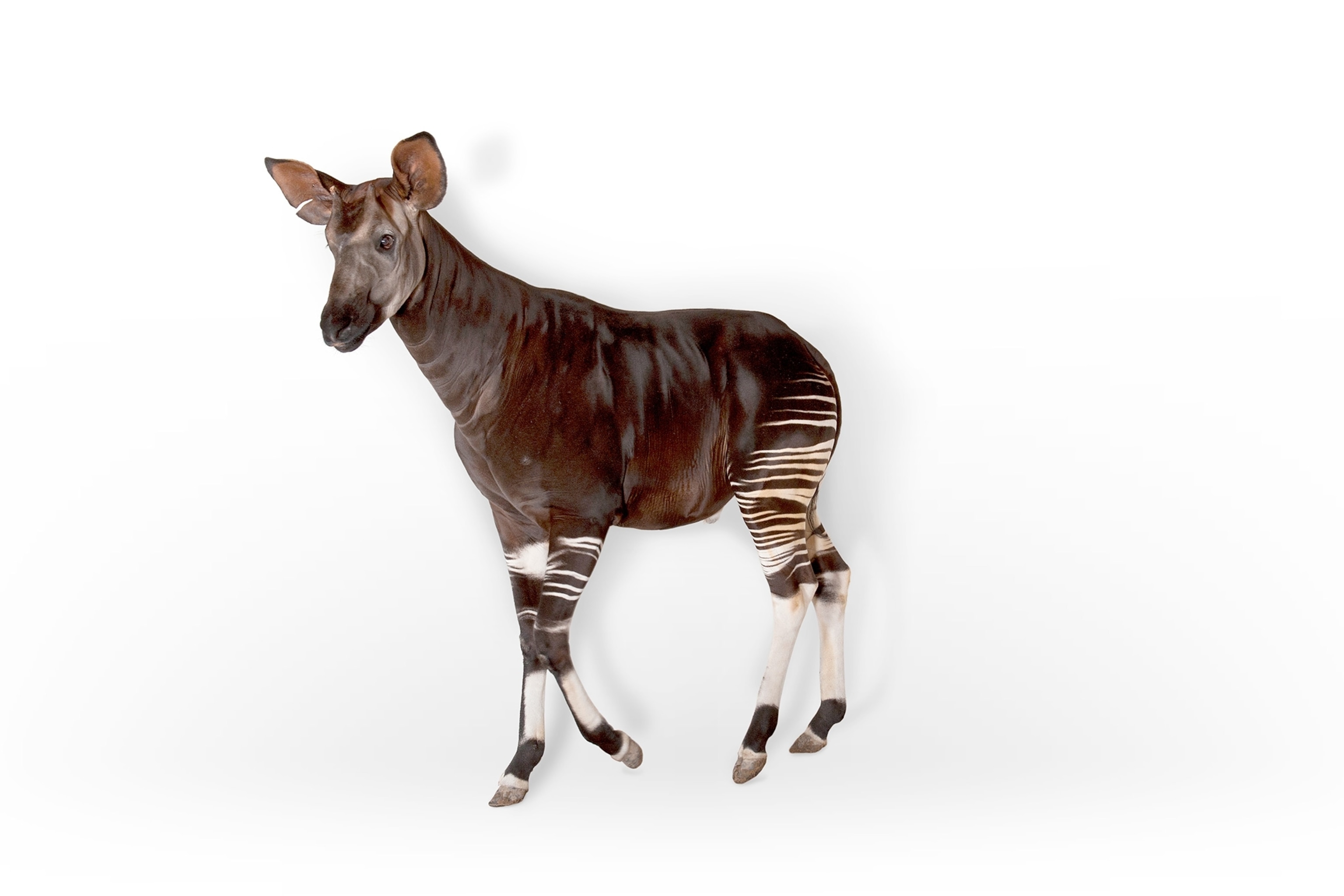 Okapis live in the rainforests of the Democratic Republic of Congo. Researchers estimate the populations of these endangered animals may have been slashed in half over the past two decades.

What is the okapi?

Known as the “forest giraffe,” the okapi looks more like a cross between a deer and a zebra. Nevertheless, it’s the giraffe's only living relative. The okapi is native to the Ituri Rainforest in the Democratic Republic of Congo—the only place where it can be found in the wild—and has thick, oily fur to stay dry in the rain. It also has scent glands on the bottom of its hooves that help mark its territory. Except for the tips, the okapi’s short horns are covered in skin. While all males have horns, most females have knobby bumps instead.

The okapi lives among dense flora in the rainforest. It can blend into its surroundings thanks to the brown and white stripes on its rump, which mimic the appearance of streaks of sunlight coming through the trees.

Its plant-based diet consists of fruits, buds, leaves, twigs, and other vegetation. Just like the giraffe and cow, the okapi has four stomachs that aid with digesting tough plants. Also like its giraffe cousin, the okapi has a long, dark tongue that can strip leaves from branches. An okapi consumes between 45 and 60 pounds of food each day, including riverbed clay for minerals and salt. It will occasionally eat bat excrement for nutrients.

Active during the day, the elusive okapi prefers to be alone. Its hooves secrete sticky territorial markings, while males also spray their territory with urine. Sometimes, however, okapis will congregate in small groups to eat, groom, and even play.

Female okapis typically have only one calf per pregnancy. An okapi calf is able to walk just 30 minutes after it’s born but can’t defecate until it’s at least a month old—that way, the smell of feces won’t attract predators. While adult okapis don’t vocalize much (except when they’re ready to breed), calves will bleat, cough, and whistle when their mother is away. Okapi mothers communicate with their calves by making infrasounds, which are noises that are undetectable to the human ear. Female okapis are very protective of their young and will beat the ground with their hooves to ward off potential threats. However, upon reaching six months of age, a calf must fend for itself.

According to the International Union for Conservation of Nature’s (IUCN) Red List of Threatened Species, the okapi is endangered. While it’s not clear how many remain in the wild, scientists estimate that populations may have been slashed in half over the past two decades. Though the leopard is the okapi’s chief predator in the wild, human hunters pose a greater threat to the okapi’s existence. In 2012, a militia group killed 14 okapis at a conservation center located at the headquarters of the Okapi Conservation Project. Today, poachers continue to kill okapis for their meat and skin, and civil unrest in the Democratic Republic of Congo makes enforcement of wildlife protection laws increasingly difficult. Human-induced deforestation also leads to fragmentation and destruction of crucial okapi habitats.

Founded in 1987, the Okapi Conservation Project still exists, despite the brutal attack on its headquarters in 2012. It supports the Okapi Wildlife Reserve, a World Heritage Site in the Itiru Forest, home to 5,000 okapis. The Okapi Conservation Project works with the Institute in Congo for the Conservation of Nature to provide resources to rangers who patrol the reserve and other okapi-occupied areas. The rangers’ duties include detaining armed poachers before they can kill okapis and monitoring agricultural expansion that could harm okapi habitats. IUCN has also teamed up with other organizations, including the Zoological Society of London, to implement a decade-long strategy to reduce illegal activity that could drive the okapi to extinction.

All about the okapi