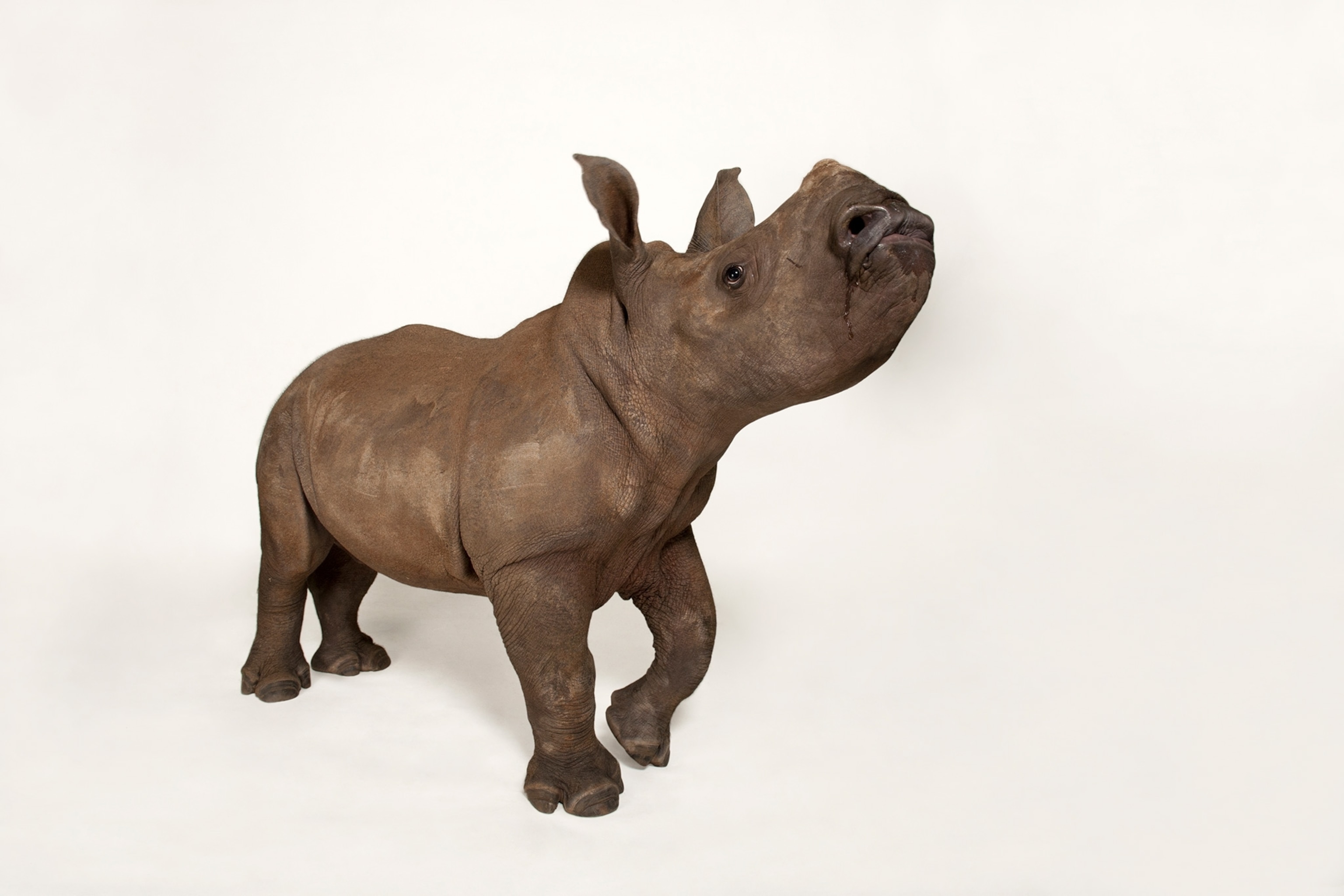 Southern white rhinos were thought to be extinct at the end of the 19th century, until a small population was found in South Africa in 1895. Poaching for their horns remains a serious threat for this at-risk animal.

What is the southern white rhinoceros?

The southern white rhino and northern white rhino are subspecies of the white rhino. Aside from living in different parts of Africa, they differ slightly in the shape of their teeth and heads, appearance of skin folds, and amount of hair. In general, southern whites are a little larger and hairier. Contrary to the species name, both subspecies are gray in color. "White" may be taken from the Afrikaans word for “wide,” in reference to their mouths, which are wide and square to help them graze on grass.

Nearly 99 percent of southern white rhinos live in the savannas of Kenya, Namibia, and Zimbabwe, though the vast majority are found in South Africa. They can live up to 35 years in the wild and 40 in captivity.

White rhinos are semi-social and territorial. They stay together in herds on the grassy plains and mark their territory with strategically placed deposits of dung. The males defend their territory vigorously with their horns and massive sizes. Males tend to be more solitary than females, and live on about one square mile of land, whereas females can range over an area almost seven times as large.

White rhinos love mud. They will roll around in it, cover themselves with it, and cover their young with it. The wet mud cools them and protects their skin from sun and insects.

Southern white rhinos were thought to be extinct in the late 19th century, until 1895, when a small population of fewer than a hundred were found in Kwazulu-Natal, South Africa. After a century of conservation efforts, there are 19,600-21,000 southern white rhinos in protected areas and private game reserves, especially in South Africa. They are now classified as near threatened. Their comeback is regarded as a major conservation success story.

Poaching for their horns is one of the biggest threats to white rhinos. Their horns are in demand in Asia, primarily in Vietnam and China, for use in traditional medicines and for artistic carvings. Wealthy businessmen in particular desire rhino horn products as a way to show off that they have enough money and social status to buy something so rare and taboo.

From 2012 to 2017, white rhinos’ population dropped 15 percent, largely because of poaching. Poaching and illegal trade in rhino horn is usually part of sophisticated, organized criminal networks. South Africa, where the majority of southern white rhinos live, has been facing a rhino poaching crisis. Incidents are beginning to drop, but experts are still wary.

The international trade in rhino horn has been banned by the Convention on International Trade in Endangered Species (CITES), a global treaty, since 1977, and the domestic trade within countries is mostly outlawed by national governments as well.

There is a heated debate among scientists, economists, government officials, and others over whether legalizing the international trade again would help decrease poaching. Efforts to do so, however, have so far failed. Nonetheless, South Africa ruled in 2017 to once again allow buying and selling of horn within the country. There is little demand for rhino horn within South Africa, however, leading many to worry the legal domestic trade will simply make the illegal international trade easier.

Many southern white rhinos in South Africa are under private ownership on rhino farms, where they’re used commercially for breeding, photographic tourism, legal hunting, and horn production. Breeding on rhino farms is one of reasons southern white rhino numbers have rebounded. Rhino owners are also on the front-lines of poaching, spending big sums each year on private security to protect their herds. Owners argue that a legal rhino horn trade would provide them with the income necessary to continue to fight poachers.

There are a number of creative ways people have used to try to protect rhinos from poachers, including injecting the rhinos' horns with poison (which wouldn’t harm the rhino but could dissuade buyers) and injecting horns with dye, though that doesn't seem to have helped. Some rhinos are dehorned to deter poachers—horn is like fingernails, which can be cut back without pain. The development of synthetic rhino horn is highly controversial, with many economists arguing that ending the illegal trade is not as simple as flooding the market to decrease the value of horn and the incentive to poach.

Better law enforcement, both in supply and demand countries, as well as demand-reduction campaigns to convince people not to buy rhino horn are necessary to help end poaching.