The 'Gray Zone' Between the U.S. and Canada: Why This Murky Border Matters

When the U.S. Border Patrol stopped fishing boats along the border between the U.S. and Canada, it reheated centuries-old tensions between the two countries in the Gulf of Maine.

The 'Gray Zone' Between the U.S. and Canada: Why This Murky Border Matters

When the U.S. Border Patrol stopped fishing boats along the border between the U.S. and Canada, it reheated centuries-old tensions between the two countries in the Gulf of Maine.

The Trump administration’s new immigration policies are having an unexpected effect at a quiet but long-disputed border: a lobster-filled waterway between the state of Maine and the Canadian province of New Brunswick.

Known as the gray zone, the region includes Machias Seal Island, home to a large population of puffins and a now-automated lighthouse built by the Canadian government. The U.S. refuses to recognize the structure, though Canada flies lighthouse keepers in by helicopter to keep temporary watch. The island has no permanent residents, but the seabirds draw tourists from both nations—typically a maximum of 30 each day, split between the two countries. 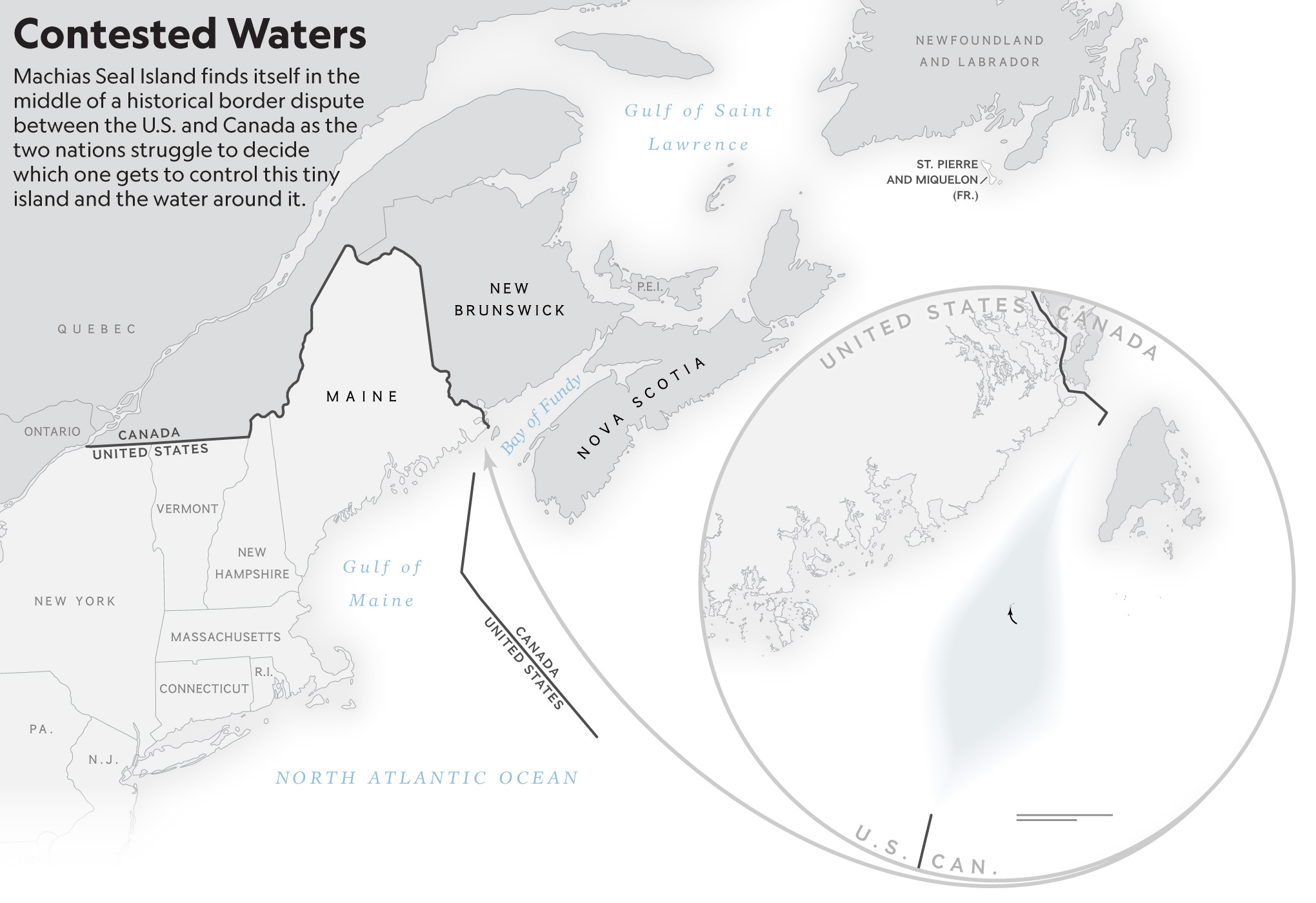 Machias Seal Island finds itself in the middle of a historical border dispute between the U.S. and Canada as the two nations struggle to decide which one gets to control this tiny island and the water around it.

Though the U.S. and Canada have the longest undefended border in the world, this particular stretch has been under dispute since the late 1700s. In 1783, the treaty that ended the Revolutionary War placed Machias Seal Island under U.S. control. Canada disagreed, pointing to the land grant that founded Nova Scotia, which included the island.

The issue was never resolved. Alex Tait, the geographer for the National Geographic Society, says the two countries went to the International Court of Justice, also known as the World Court, in 1981 to set the maritime boundary south of the gray zone. But when it came to the gray zone itself, the two countries wished to reserve the ability to have direct negotiations for a solution.

“The land rules the sea,” Tait says. “Whoever has sovereignty over the island has control of the seas."

Porter Fox, the author of Northland: A 4,000-Mile Journey Along America's Forgotten Border, canoed and drove along the entire U.S.-Canada border on a trip over the past three years.

“There’s no indication of where the border is as it goes over the water,” Fox says of the gray zone. “Many times I was there on a fishing boat. I canoed along the border for over 100 miles, and you can’t see it.”

He says because it is difficult to mark and maintain the border, people can easily wander across it by accident, like the teenage girl who jogged across it by mistake from Vancouver and was detained for two weeks in Washington state.

“There were so many sections—the north woods of Maine, the boundary waters of northern Minnesota, Lake of the Woods in the Northwest Angle, North Cascades in Washington, many spots along the northern plains and northern Montana—where the border is unmarked,” he says. “It's almost impossible to tell what side you're on.”

Joshua Smith, professor of humanities at U.S. Merchant Marine Academy at Kings Point, New York, completed his Ph.D. at the University of Maine near the international border. He says the frequent fog makes it hard to see the border, and hard to catch people who cross it intentionally. Early in U.S. history, smugglers would take advantage of the hard-to-mark border, anchoring their ships on the right side of the border while their hull was on the wrong side of it.

“There are all sorts of games that can be played with these borders where it's often difficult to recognize where one nation ends and another begins,” Smith says.

Still, despite the tension and confusion, the two countries have existed side by side in relative peace for years, with U.S. and Canadian lobstermen sharing the waterways and cooperating to fish the region.

Tempers have sometimes risen as market prices did the same. Fox says about a decade ago, the price of lobster spiked, and Nova Scotia lobstermen took a renewed interest in the gray zone because of its commercial potential. The Canadian and U.S. lobstermen have been battling for control over the area since then.

Additionally, warming seas means the best fishing may be pushed northward, and Tait says tensions in the area may continue because of that threat. “Climate change is pushing the rich lobster zone north,” he says. “The Maine lobstermen are now starting to see a decline in their lobster populations.”

Now, amid growing trade-related friction between the two countries, the U.S. Border Patrol’s interactions with Canadian fishing boats have brought the unresolved border back into the spotlight. The U.S. Border Patrol stopped at least 10 fishing boats in the area in June, saying it was enforcing “immigration laws and other violations of federal law,” according to the CBC.

While the U.S. Border Patrol’s recent boat-boarding didn't result in any arrests and it says the stops were routine, the action has drawn concern from Canadian residents and officials.

Dominic LeBlanc, the minister of fisheries and oceans, also shared his unease, telling the CBC, “Obviously, we are concerned when Canadian fishers are intercepted by American authorities when they are practising fishing activity that has existed positively and co-operatively with the Americans for a very long time."

“It's a border that's been highly porous since the day it was drawn at the close of the American Revolution,” he says. “Applying a zero-tolerance policy, a strict policy at the ports of entry—they're just not working. It’s just another example of how a border policy that's fashioned for the southern part of the United States simply doesn't work for the northern border.”

Editor's Note: The article initially referred to New Brunswick as a Canadian territory. It is a Canadian province.