At this Arctic science base, life is anything but lonely

In Greenland, researchers from around the world document the warming arctic—and share a sense of community.

Read Caption
A helium-filled balloon is tethered at Flyger’s Hut, about a mile southeast of Station Nord. The instrument will measure air turbulence, solar and terrestrial radiation, and black carbon from the lowest layers of the atmosphere—lower than an airplane can fly safely.

At this Arctic science base, life is anything but lonely

In Greenland, researchers from around the world document the warming arctic—and share a sense of community.

This story appears in the September 2019 issue of National Geographic magazine.

The summer evening is warm enough for the soldiers to sit outside with their shirts off.

One person is playing the guitar, another is reading. There’s a relaxed, vacation vibe despite the location: 575 miles from the North Pole at a Danish military outpost in northeastern Greenland called Station Nord. The generator hums in the distance, and occasionally the two Greenland dogs begin to bark. The sun circles the Arctic sky. 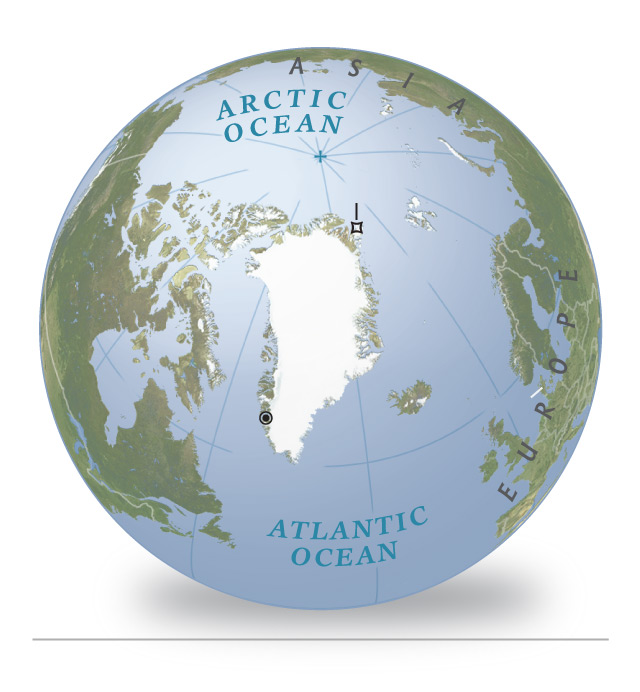 The day-to-day operations of this base are mostly scientific. The Arctic is warming faster than any other place on Earth, and for researchers studying the impact of climate change, the base has the advantage of being remote—at nearly 82 degrees north and inside the world’s largest national park—and accessible, because of its runway. It’s no exaggeration to say that whatever happens here affects the whole world: The Arctic is part of a global cooling system, and as rising temperatures accelerate the loss of sea ice, that system is breaking down. This is a perfect place for visiting researchers from around the world to gather data from the ice, sea, and atmosphere to measure changes over time—data that scientists hope will help them predict what’s in store for the planet.

There aren’t many places where you can wake up in a bunkhouse, have coffee, and then step into one of the planet’s most extreme environments: Whiteouts, extreme cold, fog, and months of winter darkness are par for the course. During spring the temperature can dip below minus 30 degrees Fahrenheit, and by summer there’s so much dust from blowing winds, it coats your teeth.

Station Nord also has a political purpose, which is why it’s run by soldiers. Denmark has an internationally recognized sovereignty claim over this region but must demonstrate its presence here in order to uphold it. For the six specialists who live here—all soldiers in the Danish military, almost always men—Station Nord is home for a 26-month posting.

The station, which began primarily as a weather center in 1952, is essentially a small village with its own airport. There are more than 25 buildings, including bunkhouses, workshops, a generator shed, a kitchen, and a community center. Single-purpose structures are spread out as a precaution against fire.

The campus is extensive enough to provide the infrastructure required to produce world-class science in a hazardous—and beautiful—environment. The soldiers clear runways, fuel airplanes, clean barracks, secure food shipped on cargo planes and retrieve water from a glacial lake nearby, and repair equipment. In winter the six of them—eight if you count the dogs—are alone for months, with a satellite connection that allows for basic email and text messages. Everyone gets a monthly call allowance. It’s more work to shut the station completely during winter than to keep a skeleton crew to look after things.

From spring through fall, they host a rotating, international community of up to 60 people—teams of scientists, support workers, pilots, engineers, and military personnel.

The community has a culture of its own. If you are late for a communal meal, you are expected, at some point, to bake a cake for everyone. Every Saturday night is feast night, with a three-course meal. Everyone must wear a necktie or a skirt, and if you didn’t bring one, as most first timers don’t, you may use the station facilities to make one out of anything you can find, including wood, electrical wire, books, or tea bag wrappers; real examples are exhibited on the kitchen wall.

On Saturdays, soldier Mads Adamsen says, you feel like you’re “coming home to your family from another place.”

The hours are long, the logistics complex. With rapidly changing conditions—sun to snow in an hour sometimes—there’s always some risk.

Thomas Krumpen, a senior scientist from Germany’s Alfred Wegener Institute, leads aircraft-​based surveys that measure, among other things, the summer thickness of sea ice, which is very difficult to calculate from satellite imagery. To do this, a modified DC-3 aircraft flies over the ice at an altitude of 200 feet while trailing a sensor on a cable just 50 feet above the ice surface. The job takes so much concentration, Krumpen says, “I find it hard sometimes to really just look outside the window and enjoy or observe what I am actually surveying.”

These flights demonstrate the effort it can take to answer simple questions: How thick is the sea ice? How reflective is the snow?

Observations from the flights feed into climate models, complex computer programs that use equations and thousands of pieces of data to project what will happen as the climate continues to change. Information about the Arctic is essential to predicting global consequences such as temperature increase and sea-level rise.

“We need to look into the future in order to tell people what are the consequences we are facing,” Krumpen says. Other researchers fly weather balloons, dig pits to sample the snow, or peer at their instruments all night with a sled dog nearby to warn them of polar bears. Little by little, they glean information that will help answer the biggest question of the climate change era: What is going to happen to our planet? The answer is both politically and scientifically contentious, and it takes many years of data from many locations to draft an answer.

For this region of the world, none of it could happen without station specialists such as Jesper Juul Hansen, who makes it sound simple. “We just did our part so that they could do their part,” he says.

The work takes its toll. Nora Fried celebrated her 25th birthday at the station as a research assistant in 2018. Someday, “I have to explain to my children that we didn’t do anything, although we knew that the Arctic would be ice free,” she says. “I feel sorry for the Arctic.”

One Saturday each summer, the soldiers organize an annual pig roast—the pig arrives by cargo plane—and a game night, including a jousting competition. Each team of two is given a three-wheeled cargo bike and a wooden jousting lance they must push through a ring hanging from a rope. The ring gets smaller with each round, and competitors try hard to distract each other. The silliness brings people together, and pushes those at the station toward feeling like a community.

“You realize that you are relying on people all the time for your life to work out, right, but you don’t see it back home,” Hansen says. “You don’t really have that feedback where you see the fruits of your labor reflected in other people.” But up in the Arctic, he says, “it’s very obvious.”

Jennifer Kingsley’s last story for National Geographic was about women in the Chukotka region of Russia. Esther Horvath is a Germany-based photographer who documents polar regions.