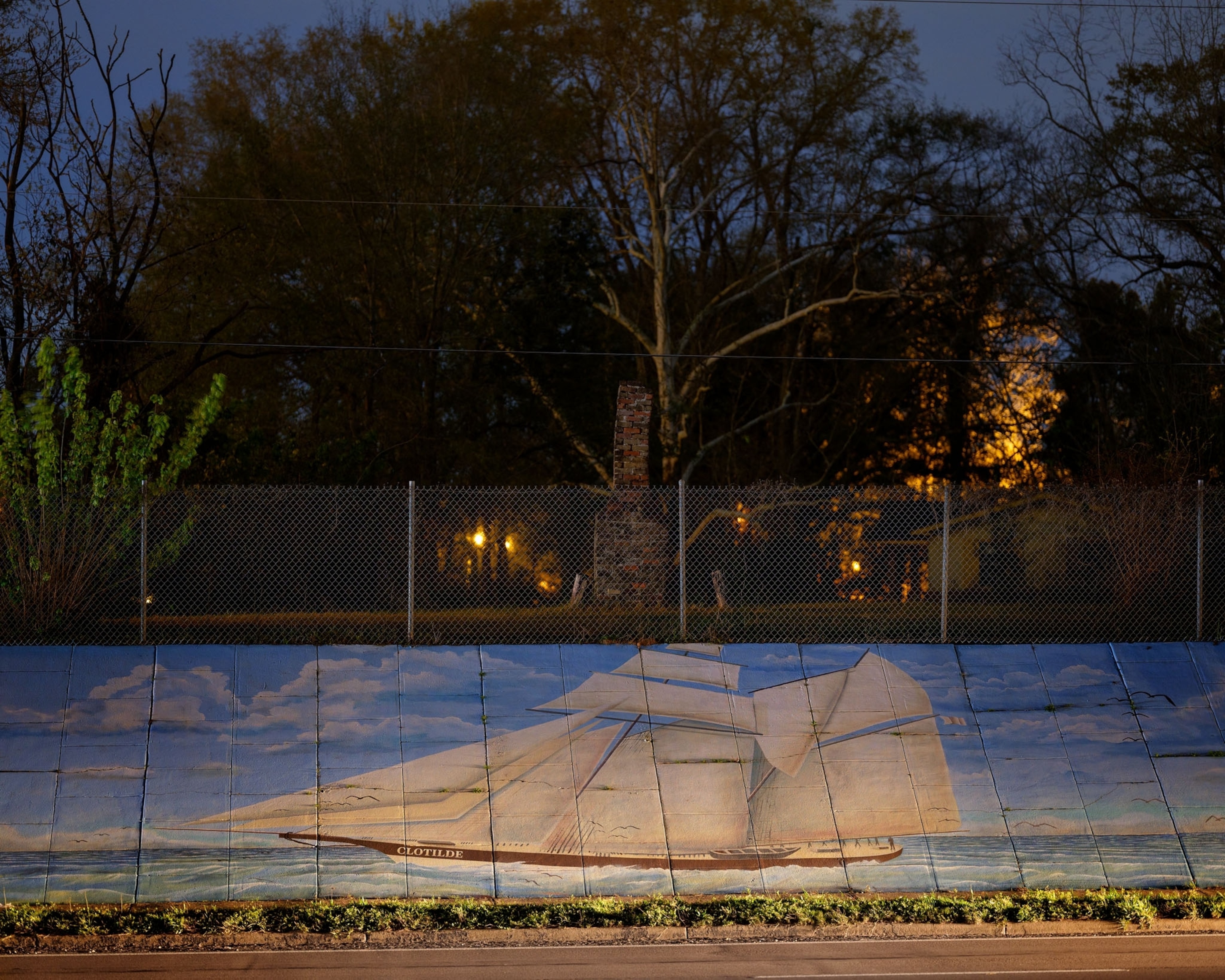 A mural of the Clotilda adorns a concrete embankment in Africatown, a community near Mobile founded by Africans illegally transported to Alabama aboard the slave ship. Some of their descendants still live in the neighborhood.
Photograph by Elias Williams, National Geographic
Editor's note: This story was updated on May 28, 2019, with more details about the discovery.

"Descendants of the Clotilda survivors have dreamed of this discovery for generations," says Lisa Demetropoulos Jones, executive director of the Alabama Historical Commission (AHC) and the State Historic Preservation Officer. "We’re thrilled to announce that their dream has finally come true."

The captives who arrived aboard Clotilda were the last of an estimated 389,000 Africans delivered into bondage in mainland America from the early 1600s to 1860. Thousands of vessels were involved in the transatlantic trade, but very few slave wrecks have ever been found.

(See how archaeologists pieced together clues to identify the long-lost slave ship.)

"The discovery of the Clotilda sheds new light on a lost chapter of American history," says Fredrik Hiebert, archaeologist-in-residence at the National Geographic Society, which supported the search. "This finding is also a critical piece of the story of Africatown, which was built by the resilient descendants of America’s last slave ship."

Rare firsthand accounts left by the slaveholders as well as their victims offer a one-of-a-kind window into the Atlantic slave trade, says Sylviane Diouf, a noted historian of the African diaspora.

"It’s the best documented story of a slave voyage in the Western Hemisphere," says Diouf, whose 2007 book, Dreams of Africa in Alabama, chronicles the Clotilda’s saga. "The captives were sketched, interviewed, even filmed," she says, referring to some who lived into the 20th century. "The person who organized the trip talked about it. The captain of the ship wrote about it. So we have the story from several perspectives. I haven’t seen anything of that sort anywhere else."

In 1927 Cudjo Lewis, then one of the last living Clotilda survivors, shared his life story with anthropologist Zora Neale Hurston. Her book Barracoon, finally published in 2018, includes Lewis's telling of the harrowing voyage aboard Clotilda.

In this short film, the descendants of African slaves describe what it would mean to discover and document the wreck of the Clotilda, the last known American slave ship.

It began with a bet

Clotilda’s story began when Timothy Meaher, a wealthy Mobile landowner and shipbuilder, allegedly wagered several Northern businessmen a thousand dollars that he could smuggle a cargo of Africans into Mobile Bay under the nose of federal officials.

Importing slaves into the United States had been illegal since 1808, and southern plantation owners had seen prices in the domestic slave trade skyrocket. Many, including Meaher, were advocating for reopening the trade.

Meaher chartered a sleek, swift schooner named Clotilda and enlisted its builder, Captain William Foster, to sail it to the notorious slave port of Ouidah in present-day Benin to buy captives. Foster left West Africa with 110 young men, women, and children crowded into the schooner’s hold. One girl reportedly died during the brutal six-week voyage. Purchased for $9,000 in gold, the human cargo was worth more than 20 times that amount in 1860 Alabama.

After transferring the captives to a riverboat owned by Meaher’s brother, Foster burned the slaver to the waterline to hide their crime. Clotilda kept her secrets over the decades, even as some deniers contended that the shameful episode never occurred.

Patricia Frazier carries the flag of Benin, the modern nation once ruled by the kingdom of Dahomey, who sold more than a hundred captives to the captain of the Clotilda. "If they find that ship, I think it will make people more aware of our history," says Frazier. "Sometimes you need something tangible to spur those memories."

After the Civil War ended and slavery was abolished, the Africans longed to return to their home in West Africa. Lacking the means, they managed to buy small plots of land north of Mobile, where they formed their own tight-knit community that came to be known as Africatown. There they made new lives for themselves but never lost their African identity. Many of their descendants still live there today and grew up with stories of the famous ship that brought their ancestors to Alabama.

"If they find evidence of that ship, it's going to be big," descendant Lorna Woods predicted earlier this year. "All Mama told us would be validated. It would do us a world of good."

Mary Elliott, a curator at the Smithsonian National Museum of African American History and Culture, agrees.

"There are many examples today—the Tulsa race riots of 1921, this story, even the Holocaust—where some people say it never happened. Now, because of the archaeology, the archival research, the science combined with the collective memories of the community, it can't be refuted. They are now connected to their ancestors in a tangible way, knowing this story is true." (Their ancestors survived slavery. Can their descendants save the town they built?)

The hunt for lost history

Several attempts to locate Clotilda’s remains have been made over the years, but the Mobile-Tensaw Delta is rife with sloughs, oxbows, and bayous, as well as scores of shipwrecks from more than three centuries of maritime activity. Then in January 2018 Ben Raines, a local journalist, reported that he had discovered the remains of a large wooden ship during an abnormally low tide. The AHC, which owns all abandoned ships in Alabama’s state waters, called in the archaeology firm Search, Inc., to investigate the hulk.

The vessel in question turned out to be another ship, but the false alarm focused national attention on the long-lost slaver. The incident also prompted the AHC to fund further research in partnership with the National Geographic Society and Search, Inc.

Researchers combed through hundreds of original sources from the period and analyzed records of more than 2,000 ships that were operating in the Gulf of Mexico during the late 1850s. They discovered that Clotilda was one of only five Gulf-built schooners then insured. Registration documents provided detailed descriptions of the schooner, including its construction and dimensions.

"Clotilda was an atypical, custom-built vessel," says maritime archaeologist James Delgado of Search, Inc. "There was only one Gulf-built schooner 86 feet long with a 23-foot beam and a six-foot, 11-inch hold, and that was Clotilda."

Records also noted that the schooner was built of southern yellow pine planking over white oak frames and was outfitted with a 13-foot-long centerboard that could be raised or lowered as needed to access shallow harbors.

Based on their research of possible locations, Delgado and Alabama state archaeologist Stacye Hathorn focused on a stretch of the Mobile River that had never been dredged. Deploying divers and an array of devices—a magnetometer for detecting metal objects, a side-scan sonar for locating structures on and above the river bottom, and a sub-bottom profiler for detecting objects buried beneath the mucky riverbed—they discovered a veritable graveyard of sunken ships.

Prior to the state survey, Raines continued his own search for the wreck, enlisting researchers from the University of Southern Mississippi (USM) to map the contours of the riverbed and detect any submerged objects. The USM survey revealed the presence of a wooden wreck bearing some hallmarks of a 19th-century vessel.

"The dimensions of the ship have not been determined yet,” Raines reported in June 2018. “It also remains unclear what type of vessel was found. Answering those questions will take a more thorough and invasive examination, precisely the expertise of Search, Inc."

Delgado’s team easily eliminated most of the potential wrecks: wrong size, metal hull, wrong type of wood. But the vessel Raines and the USM survey had highlighted stood out from the rest.

Over the next ten months, Delgado’s team analyzed the sunken vessel’s design and dimensions, the type of wood and metal used in its construction, and evidence that it had burned. It "matched everything on record about Clotilda," Delgado said.

Samples of wood recovered from Target 5 are white oak and southern yellow pine from the Gulf coast. The archaeologists also found the remains of a centerboard of the correct size.

Metal fasteners from its hull are made of hand-forged pig iron, the same type known to have been used on Clotilda. And there’s evidence that the hull was originally sheathed with copper, as was then common practice for oceangoing merchant vessels.

No nameplate or other inscribed artifacts conclusively identified the wreck, Delgado says, "but looking at the various pieces of evidence, you can reach a point beyond reasonable doubt."

The wreck of Clotilda now carries the dreams of Africatown, which has suffered from declining population, poverty, and a host of environmental insults from heavy industries that surround the community. Residents hope that the wreck will generate tourism and bring businesses and employment back to their streets. Some have even suggested it be raised and put on display.

The community was recently awarded nearly $3.6 million from the BP Deepwater Horizon legal settlement to rebuild a visitor center destroyed in 2005 by Hurricane Katrina. But what’s left of the burned-out wreck is in very poor condition, says Delgado. Restoring it would cost many millions of dollars.

But a national slave ship memorial—akin to the watery grave of the U.S.S. Arizona in Pearl Harbor—might be an option. There visitors could reflect on the horrors of the slave trade and be reminded of Africa’s enormous contribution to the making of America. (Read about 13 museums and monuments that connect to important moments in African-American history.)

"We are still living in the wake of slavery," says Paul Gardullo, director of the Center for the Study of Global Slavery at the National Museum of African American History and Culture and a member of the Slave Wrecks Project that was involved in the search for Clotilda. “We continue to be confronted by slavery. It keeps popping up because we haven’t dealt with this past. If we do our work right, we have an opportunity not just to reconcile, but to make some real change.”

The Alabama Historical Commission will release the official archaeology report at a community celebration in Africatown on Thursday, May 30.

The owner of the Clotilda smuggled African captives into Alabama in July 1860, then set the vessel ablaze to destroy the evidence.
Their ancestors survived slavery. Can their descendants save the town they built?

Their ancestors survived slavery. Can their descendants save the town they built?

Africatown, Alabama, has fallen on hard times, but residents are finding hope in their heritage.
The sinister motive that brought camels to the American West

The sinister motive that brought camels to the American West

Slaveholders wanted to expand slavery westward. But first they needed to dominate the southwestern deserts.
A Dutch museum interrogates a brutal past

A Dutch museum interrogates a brutal past

Under pressure from former colonies and activists, a storied museum is digging deeper into its collections for a fuller narrative.