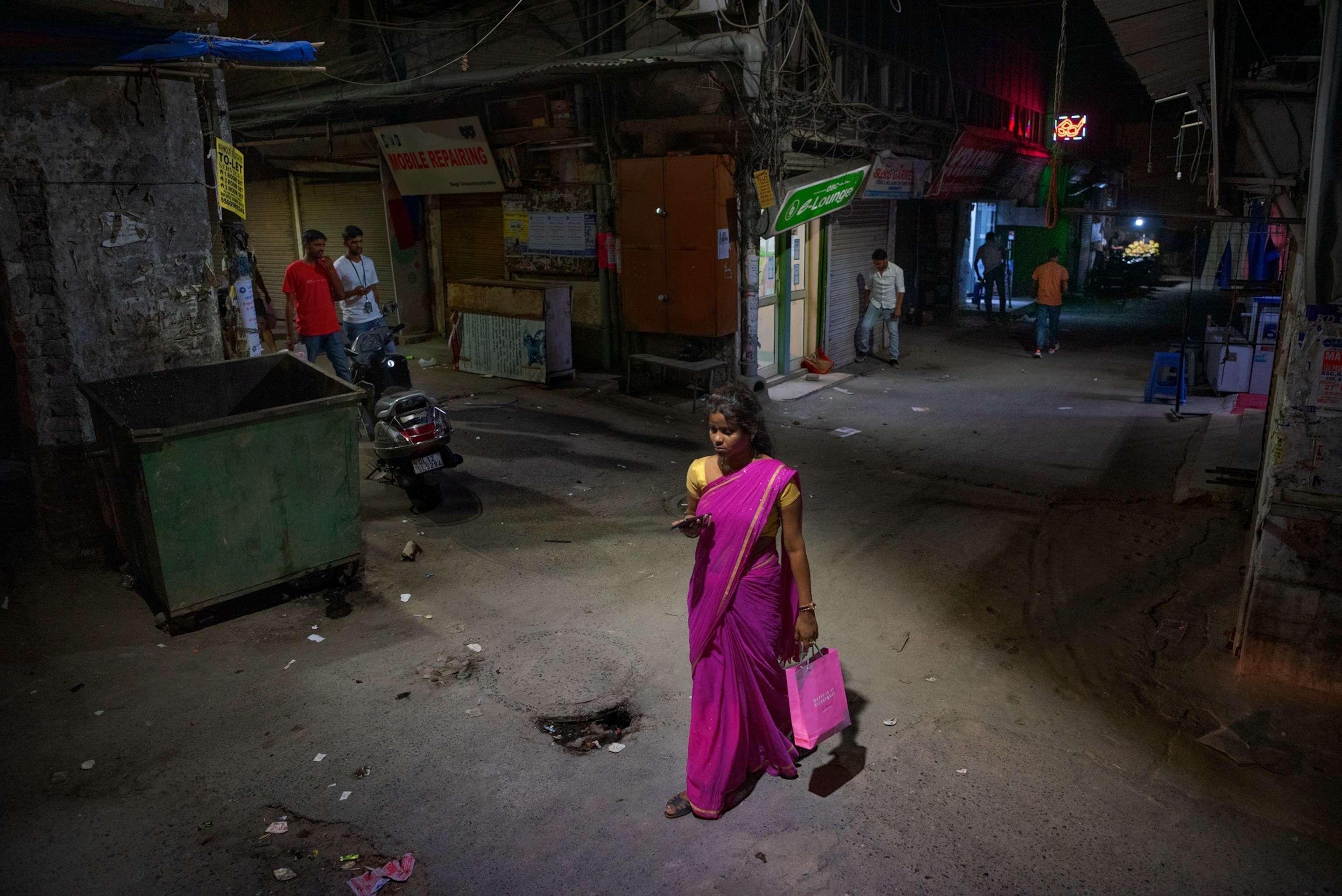 How women in India demanded—and are getting—safer streets

Since a horrifying assault shocked the nation, women there have pressed for more protection from harassment and abuse in public spaces.

A woman walks across a street in New Delhi, near where the gang rape of a woman on a bus in 2012 sparked protests nationwide. In response the federal government fast-tracked court hearings for accused assailants and set up a fund for safety initiatives.
This story is part of our November 2019 special issue of National Geographic magazine, “Women: A Century of Change.” Read more stories here.

The young women lined up in an awkward half circle, six of them pulling at their long tunics, fidgeting with their scarves. For pants, they’d chosen jeans over the baggy shalwar trousers favored by India’s traditional society—a tiny rebellion. But it mattered, for girls who’d come of age in a southeast Delhi slum. As a journalist, I’d been following their progress in a program that was supposed to raise awareness of women’s safety in urban India, and now, in early 2019, I’d brought some foreign visitors to see what these Gendering the Smart Safe City participants had to say.

“Can we sing our song?” one asked.

Of course, we said. We watched as their stance changed—feet apart, faces lifted, no pretense at smiles. They stared right at us. They made their own hip-hop beat, with knuckle beats, claps, finger snaps—and they started to rap. Rapping in Hindi sounds extra tough:

Say it aloud once with me.

This city is for you and me.

This city is not anyone’s property.

Did the foreigners see me trying not to cry? I am 42, with a family of my own. I’ve crisscrossed India, usually alone, for nearly 20 years. The stories women tell me, and the daily stories of my own life, are of a society in which public space has been marked as the territory of men.

I remember being a teenager, trying to make myself invisible inside oversize clothes, hiding from catcallers on the street. Two decades later, as a working professional, I was still hiding away, slipping low in the driver’s seat of my car to avoid the intrusive eyes of men.

For women in India, the safety statistics are grim. The National Crime Records Bureau in 2011 reported 228,650 crimes against women, including murder, rape, kidnapping, and sexual harassment. That year an international survey ranked India the world’s fourth most dangerous country for women, behind only Afghanistan, the Democratic Republic of the Congo, and Pakistan. The treatment of women in public has been a frustration for generations, but it was the case of Jyoti Singh, the woman also known as Nirbhaya, that caused something to break in India—a long-held willingness to accept danger to women as part of daily life.

Nirbhaya means “fearless” in Hindi. She became known to the world in 2012 as the young medical student who was gang-raped in a private bus by six drunken men who twisted a rod inside of her after the rapes, and then threw her out of the bus. She later died. Her adult killers were arrested, convicted, and sentenced to death, an unusual outcome in a country where only one out of four rape cases leads to a conviction. (A juvenile served three years and is now living under a different name.) More remarkable was Indian society’s reaction to Nirbhaya’s attack—day after day of women protesting in the streets, chanting “Freedom without fear!”—that has perhaps begun to lead to lasting change.

Local and national agencies have poured money into new women’s safety initiatives. In 2013 the leadership then in power set aside $145 million, calling it the Nirbhaya Fund, for measures to boost women’s security. The current government has promised nearly three times that amount to start turning eight major cities, including Delhi, into safer, better lit, and possibly more compassionate places for women.

The first stages of work are under way: In Delhi police now offer free 10-day self-defense programs for women, and they’ve fanned out through the city to give “doorstep training” to larger groups. In the southern state of Kerala, all-female police units, the Pink Police, have been assembled to patrol the streets and respond to crisis calls from women.

Pink is the designated color for most of the women-only services in the urban public transportation sector. Pink motor rickshaws are for female passengers; the drivers were all supposed to be women, but because of a lack of female drivers, now men too can drive these rickshaws after they receive security clearances by police. Metro trains now include separate coaches for women. At transit station security checks, women stand in their own lines, protected from men who might deliberately press in too close.

I confess to a certain ambivalence about all this. Government-arranged gender segregation? Is this the only way to begin making women as comfortable as men in public spaces? But then I see the hashtag campaigns of Indian women too, and am cheered: #TakeBackTheNight, a global effort that banded audacious women in India to walk outside together after dark. #MeetToSleep, which organized 600 women across the country last year to safely spend a night sleeping outdoors, as Indian men often like to do.

It’s hard, changing men’s perception of women as intruders in the public space, a key part of every women’s safety program. But it’s not impossible. The song of those Delhi rappers is on YouTube now. Look for Khadar ki Ladkiyan (Girls of Khadar), and you’ll find it. Watch the women link arms in the street, gazing into the camera, looking fierce.

Listen to us, loud and clear.

We are brave, we do not fear.

The video’s viewership isn’t huge, but a lot of the admiring comments are from men. The first time I watched it, I recalled the voices of those Khadar girls—women, really—the first time they rapped for us. We were out of our minds with delight. We cheered, we whistled. We stamped our feet. “It’s not like I am always brave,” said one of the rappers, a woman named Ritu. “Sometimes I am scared too. But I am more angry and outraged.”

Ritu told us this story too: A few of them recently had been standing together on a Metro train. They caught a man with his cell phone, recording video of them from behind. They weren’t singing or rapping or trying to get attention, they were just standing on a train car, being female. Other passengers looked away, pretending not to see what was right in front of them, so the Khadar girls confronted him. They snatched the man’s phone. They took their sandals off and hit him. Before the Khadar women could report him to police, the man jumped off at the next Metro stop and ran away. This is not ideal, Ritu agrees, but concerns about personal safety often override feelings of right and wrong. “What would you do when you know no one cares about what happens to you? You do what feels right at the moment.”

Please be respectful of copyright. Unauthorized use is prohibited.
Author Nilanjana Bhowmick is a New Delhi–based journalist whose work focuses on women’s empowerment and politics. Photojournalist Saumya Khandelwal, also based in New Delhi, focuses on gender and environmental issues.

To mark the centenary of U.S. women winning the vote, National Geographic launches a year-long project on women’s impact in the world.
We asked women around the world these 6 provocative questions

We asked women around the world these 6 provocative questions

The answers may surprise you. Here's what they said.
For girls in science, the time is now

For girls in science, the time is now

Programs in science, technology, engineering, and math are boosting a new generation of female students—and countering some familiar barriers to success.
On today's battlefields, more women than ever are in the fight

On today's battlefields, more women than ever are in the fight

Females are taking more active roles in militaries, serving on the front lines of armed conflicts and as peacekeepers in the world‘s hot spots.