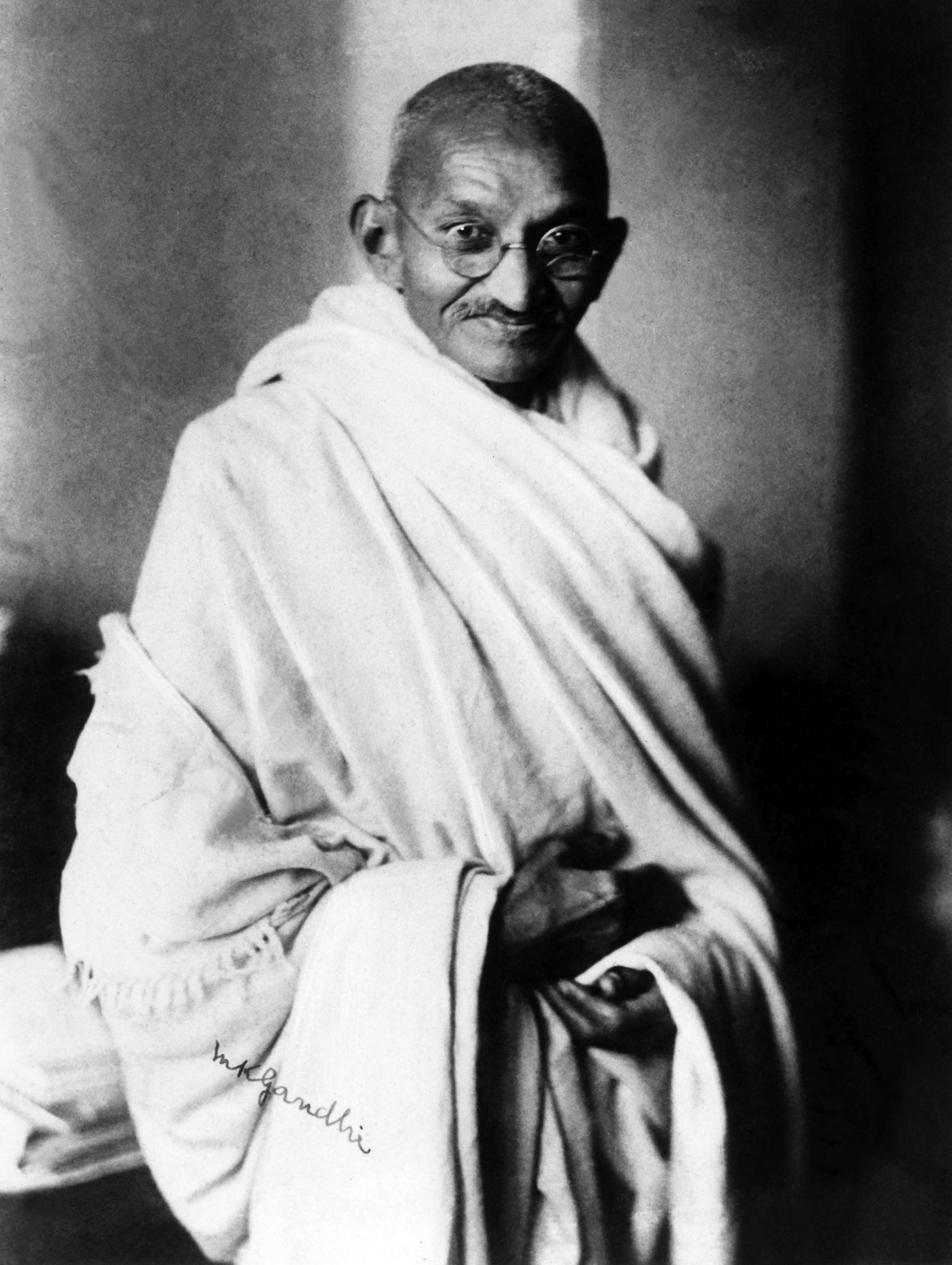 His non-violent resistance helped end British rule in India and has influenced modern civil disobedience movements across the globe.

He’s been called the “father of India” and a “great soul in beggar’s garb." His nonviolent approach to political change helped India gain independence after nearly a century of British colonial rule. A frail man with a will of iron, he provided a blueprint for future social movements around the world. He was Mahatma Gandhi, and he remains one of the most revered figures in modern history.

Born Mohandas Gandhi in Gujarat, India in 1869, he was part of an elite family. After a period of teenage rebellion, he left India to study law in London. Before going, he promised his mother he’d again abstain from sex, meat, and alcohol in an attempt to re-adopt strict Hindu morals.

In 1893, at the age of 24, the new attorney moved to the British colony of Natal in southeastern Africa to practice law. Natal was home to thousands of Indians whose labor had helped build its wealth, but the colony fostered both formal and informal discrimination against people of Indian descent. Gandhi was shocked when he was thrown out of train cars, roughed up for using public walkways, and segregated from European passengers on a stagecoach.

In 1894, Natal stripped all Indians of their ability to vote. Gandhi organized Indian resistance, fought anti-Indian legislation in the courts and led large protests against the colonial government. Along the way, he developed a public persona and a philosophy of truth-focused, non-violent non-cooperation he called Satyagraha.

Gandhi brought Satyagraha to India in 1915, and was soon elected to the Indian National Congress political party. He began to push for independence from the United Kingdom, and organized resistance to a 1919 law that gave British authorities carte blanche to imprison suspected revolutionaries without trial. Britain responded brutally to the resistance, mowing down 400 unarmed protesters in the Amritsar Massacre.

Now Gandhi pushed even harder for home rule, encouraging boycotts of British goods and organizing mass protests. In 1930, he began a massive satyagraha campaign against a British law that forced Indians to purchase British salt instead of producing it locally. Gandhi organized a 241-mile-long protest march to the west coast of Gujarat, where he and his acolytes harvested salt on the shores of the Arabian Sea. In response, Britain imprisoned over 60,000 peaceful protesters and inadvertently generated even more support for home rule.

By then, Gandhi had become a national icon, and was widely referred to as Mahatma, Sanskrit for great soul or saint. Imprisoned for a year because of the Salt March, he became more influential than ever. He protested discrimination against the “untouchables,” India’s lowest caste, and negotiated unsuccessfully for Indian home rule. Undeterred, he began the Quit India movement, a campaign to get Britain to voluntarily withdraw from India during World War II. Britain refused and arrested him yet again.

Huge demonstrations ensued, and despite the arrests of 100,000 home rule advocates by British authorities, the balance finally tipped toward Indian independence. A frail Gandhi was released from prison in 1944, and Britain at last began to make plans to withdraw from the Indian subcontinent. It was bittersweet for Gandhi, who opposed the partition of India and attempted to quell Hindu-Muslim animosity and deadly riots in 1947.

India finally gained its independence in August 1947. But Gandhi only saw it for a few months; a Hindu extremist assassinated him on January 30, 1948. Over 1.5 million people marched in his massive funeral procession.

Ascetic and unflinching, Gandhi changed the face of civil disobedience around the world. Martin Luther King, Jr. drew on his tactics during the Civil Rights Movement, and the Dalai Lama was inspired by his teachings, which are still heralded by those who seek to inspire change without inciting violence.

But though his legacy still resonates, others wonder whether Gandhi should be revered. Among some Indian Hindus, he remains controversial for his embrace of Muslims. Others question whether he did enough to challenge the Indian caste system. He has also been criticized for supporting racial segregation between black and white South Africans and making derogatory remarks about black people. And though he supported women’s rights in some regards, he also opposed contraception and invited young women to sleep in his bed naked as a way of testing his sexual self-control.

Mohandas Gandhi the man was complex and flawed. However, Mahatma Gandhi the public figure left an indelible mark on the history of India and on the exercise of civil disobedience worldwide. “After I am gone, no single person will be able completely to represent me,” he said. “But a little bit of me will live in many of you. If each puts the cause first and himself last, the vacuum will to a large extent be filled.”