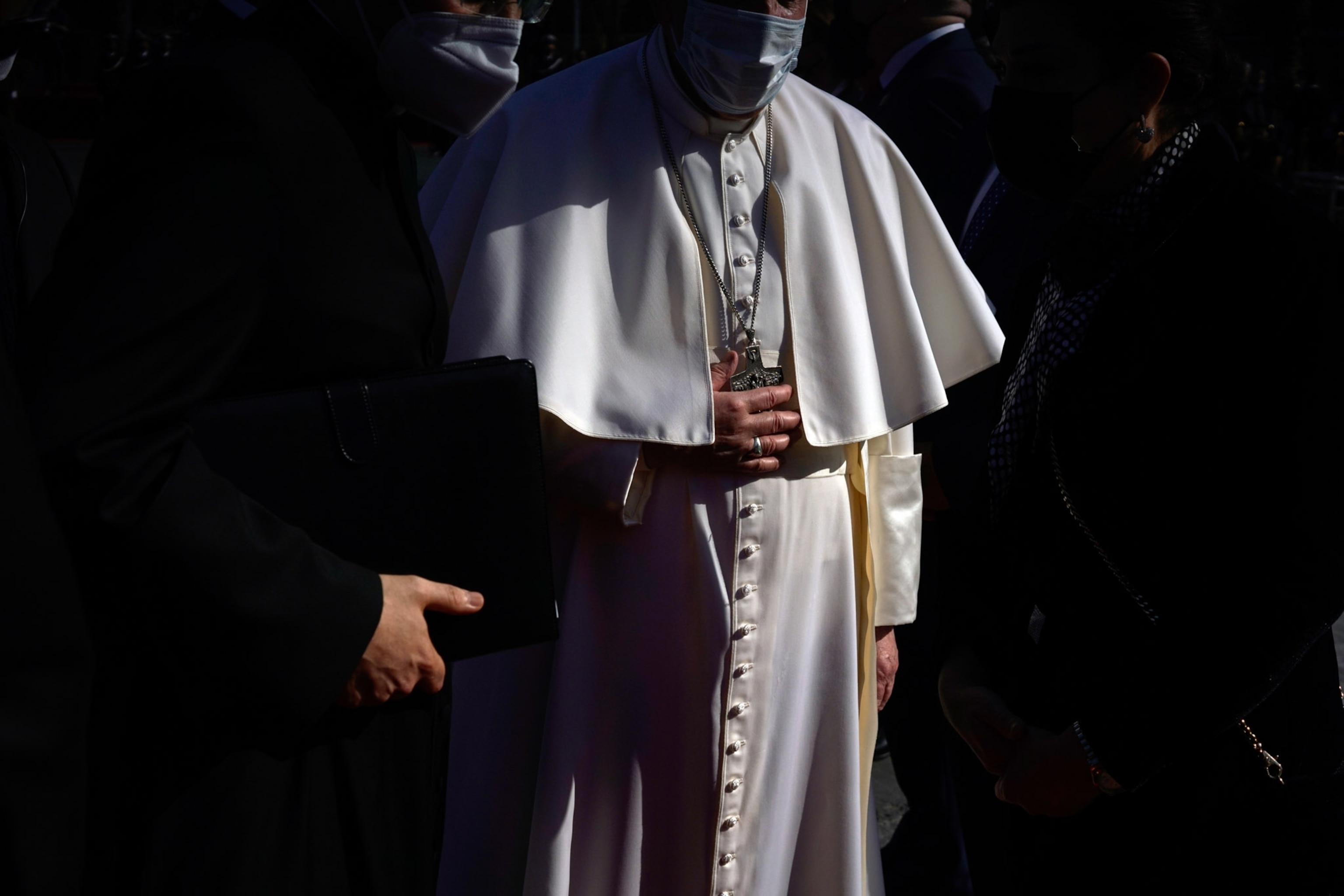 Members of Iraq’s shrinking Christian community and others draw hope from the first-ever papal tour of the country—despite the pandemic and security concerns.

Pope Francis is welcomed at the presidential palace in Baghdad shortly after the pontiff’s arrival in Iraq on March 5, 2021. Francis is the first pope to visit Iraq. “I am coming as a pilgrim, as a penitent pilgrim, to implore from the Lord forgiveness and reconciliation after years of war and terrorism, to beg from God the consolation of hearts and the healing of wounds,” Francis said in a greeting to the people of Iraq before his visit.

The last time I visited Qaraqosh in 2016, a predominantly Christian city in northern Iraq, it was devoid of life. Iraqi forces and their allies, in their push to reclaim Mosul, had just liberated the city from ISIS fighters. All that remained was graffiti, rubble, and rotting food—everyone, the ISIS militia and the locals before them, had left in a hurry. You could feel what it was like to run for your life.

This past weekend, I again found myself in Qaraqosh while photographing Pope Francis on his historic tour of Iraq. Along the once-empty streets, multicolored balloons bobbed in the breeze. Buildings and walls glistened with fresh coats of white paint. Throngs of followers, waving Iraqi and Vatican flags, flocked to the city to get a glimpse of the pontiff.

“I wish the pope came every year!” joked a fruit seller at a bustling, open-air market.

Since I began reporting from Iraq almost 20 years ago, I have seen the country and its people become deeply scarred by conflict. However, while trailing Francis, I saw a spark of hope and validation I haven’t seen before. It felt like a turning point, for people of all faiths, to have a person of his stature come to Iraq—despite the pandemic, despite security concerns, despite all these obstacles.

Francis is the first sitting pope to visit Iraq, but not for lack of effort. Both Popes John Paul II and Benedict XVI attempted to visit, but could not due to conflict and war within Iraq. So when Iraq’s President Barham Salih, sent an invitation to Francis in July 2019, he readily accepted. After a 15-month hiatus from international travel due to the pandemic, Francis chose Iraq as his first destination.

The trip nearly didn’t happen. Although the 84-year-old pope was vaccinated in January, many worried the virus would spread among those who attended his events. Iraq is currently experiencing its worst bout of new COVID-19 cases since the country’s previous peak in September. Plus, there were endless security concerns—Baghdad was bombed only a few days before Francis arrived. Vatican guards, Iraq’s military, and local policemen created a heavily armed barrier around each event space and corridor.

At the welcome party for the pope, I was corralled behind the president’s guards while Francis and Salih made their way down a line of traditional dancers and musicians. After some time, I managed to maneuver down the procession, closer to the pope. As I neared, I noticed he was limping and clearly in some kind of pain. Later I learned that Francis suffers from sciatica nerve damage and has previously canceled events due to the condition. On Friday, however, he managed along smiling and chatting with the president. By the end of his trip, Francis would ask Salih and several religious leaders for greater religious tolerance and unity.

The Pope, a saint, and the Islamic world

I was raised Catholic, although I do not consider myself religious. Still, I knew about Francis and his reputation as a man of the people. As a cleric in Buenos Aires, he was known to ride the subway and mingle with followers in the slums. He once exclaimed, “How I would like a church which is poor and for the poor!” (Will Pope Francis change the Vatican or will the Vatican change him?)

Francis is the first pope to choose St. Francis of Assisi as his namesake, a saint known as a champion of the impoverished and a bridge-builder with the Islamic world. During the fifth crusade in 1219, Francis of Assisi risked his life to meet with Egyptian sultan al-Malik al-Kamil. Both men left the encounter with a deeper appreciation of the other’s beliefs.

“[Francis of Assisi] had this incredible intuition that we identify as universal kinship: the brother and sisterhood of all peoples. That was the cornerstone of Francis of Assisi’s life and message. Pope Francis has totally understood that,” explains Sister Kathleen Warren of the Diocese of San Diego, who wrote a book about the meeting with the sultan. “[Pope Francis] had a profound message that was so similar to the message that Francis of Assisi took to the Muslim people of Egypt 800 years ago.”

On Saturday, Pope Francis traveled to Najaf to meet with Iraq’s Shiite spiritual Muslim leader Grand Ayatollah Ali al-Sistani, a reclusive figure who rarely meets with foreigners. Later that day, Francis spoke of unity in his sermon in the city of Ur while overlooking the plains where many believe Abraham once lived—a significant religious figure to Christians, Muslims, and Jews alike.

“Yet if we want to preserve fraternity, we must not lose sight of heaven. May we—the descendants of Abraham and the representatives of different religions—sense that, above all, we have this role: to help our brothers and sisters to raise their eyes and prayers to heaven,” Francis said. (Read 10 of Pope Francis’s most provocative quotes.)

Before the pope’s arrival in the country, I spent several days with the Christian community in Qaraqosh and came to recognize that by rebuilding, they were claiming their place in Iraq.

On a small hill on the outskirts of town, I met Mari Salebu, a monk who, after 15 years of living in Lebanon, had returned to repair a small monastery. The one-story building had no electricity and a small chapel with only a handful of chairs, but Salebu is determined to transform it back into a place of worship. He has planted trees nearby in hopes of one day creating a place for Christians to picnic.

After returning to Rome on Monday, Francis stopped at the Basilica of St. Mary Major with a bouquet of flowers from Iraq in hand. Inside, he placed the arrangement at the foot of an icon of the Virgin Mary, Maria Salus Populi Romani, and thanked her for protecting him throughout his trip. He then returned to his two-bedroom home at the Vatican to rest.