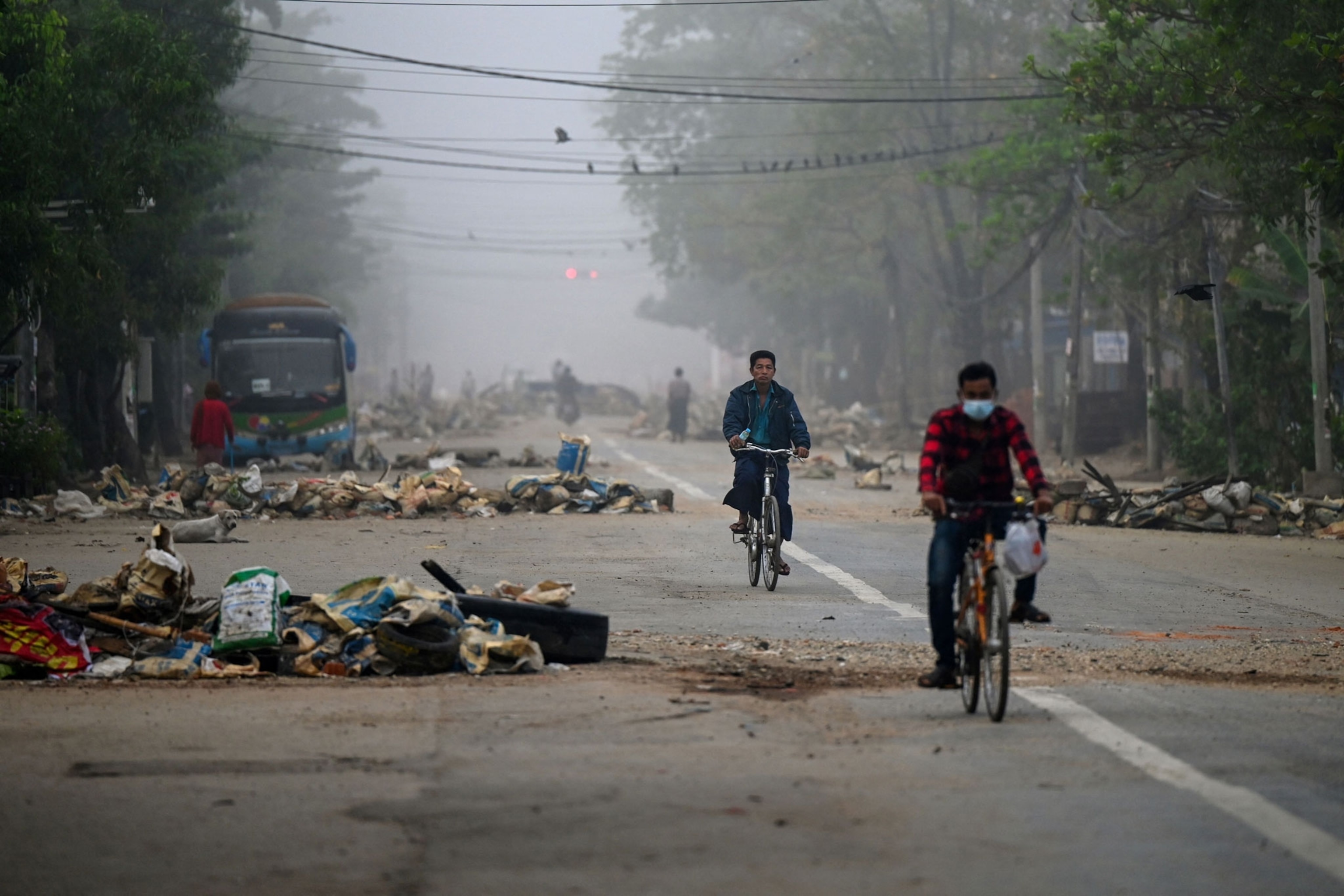 In Yangon, Myanmar, he navigates waypoints of loss and pain.

A new architectural feature of Yangon, Myanmar, following a military coup on February 1: a city of makeshift barricades put up by pro-democracy protesters.
Photograph by STR, AFP/Getty

Writer and National Geographic Fellow Paul Salopek’s Out of Eden Walk is a 24,000-mile storytelling odyssey across the world in the footsteps of our human forebears. This is his latest dispatch from Myanmar.

Yangon, MyanmarWhere do you begin walking in a city that’s become a battle zone?

Perhaps at the makeshift shrines of its dead. Take, for example, the ephemeral memorial of Khant Nyar Hein.

Khant Nyar Hein was a 17-year-old pro-democracy protester and medical student who was shot to death last month by police in his middle-class Yangon neighborhood called Tamwe. The boy’s friends recently scurried from cover to drop bouquets on the asphalt road where he fell. Heavily armed security forces glared over the wall of a nearby police station. A few paces away from the blood stain, a tea shop worker served eggs and noodles for breakfast.

“I don’t know for how much longer we will stay open,” she said in the whispery monotone of a sleepwalker. “This violence will go on to the end. Not just here—everywhere, cities, villages.” Then, with reflexive Burmese grace and hospitality, she poured more tea.

I am walking across the world for storytelling project called the Out of Eden Walk.

Occasionally, using GPS technology, I plot cultural and historical walking tours through the major cities along my journey’s continent-spanning trail. Jeddah, Saudi Arabia. Tbilisi, Georgia. Kolkata, India, and other urban centers have all been paced off to reveal the charms of humankind’s kaleidoscopic markets, parks, and alleyway eateries. But when I arrived at Yangon to prepare the logistics for my slow, multiyear journey onward into Asia, I inadvertently stepped into a world of bewildering anguish.

More than 700 citizens have been killed by the generals who seized power in a coup in Myanmar on February 1. Claiming that an election last year—which their party lost badly—was rigged, the military has detained the country’s civilian leader, Nobel laureate Aung San Suu Kyi, and imprisoned nearly 3,300 other opposition figures, democracy activists, artists, and journalists. Lately, the junta has taken to televising the beaten faces of protesters in its custody. Some experts say Southeast Asia’s poorest country may be sliding inexorably toward failed state status.

Under such heart-cracking circumstances, it seemed indecent to follow through on my project’s urban walking tours. But last month, I decided that walking the world should include both the desolating as well as the beautiful. And so, accompanied by two Burmese colleagues who can't be identified at this time for safety reasons, I trekked 10 miles through embattled Yangon, recording what I encountered at boot level in the metropolis of seven million.

The result: a city tour unlike any along my 24,000-mile global walking route.

Protesters, most young and idealistic, guarded improvised roadblocks constructed of garbage bins—and adorned with hygiene pads. (Burmese folk tradition holds that men lose their masculine power if they come into close proximity with feminine products; protesters have weaponized such superstitions against police and soldiers.) Idled taxi drivers commiserated glumly beside medieval-looking battlements that bristled with sharpened bamboo punji sticks. Buddhist shopkeepers sinking into economic ruin fed birds on the empty sidewalks, hoping to accrue spiritual merit. Most of the streets were ghostly. The raucous protest marches that had shaken Yangon in the immediate aftermath of the coup were long suppressed. (Watch young pro-democracy protesters clash with police in Yangon's Tamwe district last month.)

“We are suffering because the people are suffering,” said a saffron-robed monk slumped under tree. He flinched as police flash-bang grenades exploded nearby.

For all its waypoints of fear, anger, innocence, bitterness, and pain, Yangon seemed a city paralyzed with waiting. Nobody knew what was going to happen next. I roamed abandoned streets that had been painted by protesters with colossal letters spelling out WE WANT DEMOCRACY. Like Yangon’s largely shut-in residents, I had no idea what lay around the next corner.

To take a virtual tour of Yangon, click here.

This story was originally published on the National Geographic Society’s website devoted to the Out of Eden Walk project. Explore the site here.

Paul Salopek won two Pulitzer Prizes for his journalism while a foreign correspondent with the Chicago Tribune. Follow him on Twitter @paulsalopek.