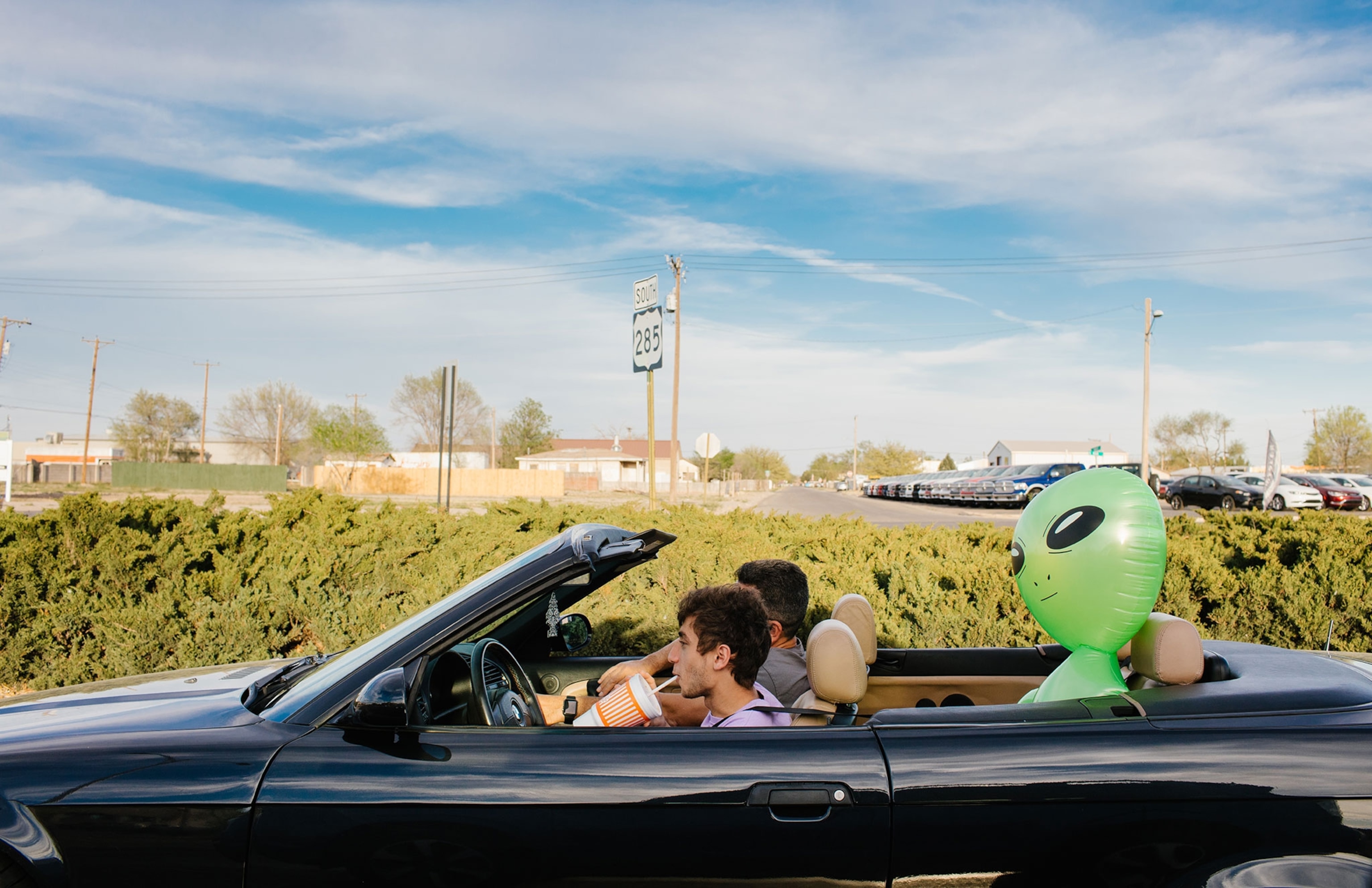 Why two million people signed up to storm Area 51

The secret military base's history reveals its enduring appeal and what might be lurking inside. Spoiler: It’s not aliens.

Two humans and their backseat stowaway drive to Roswell, New Mexico, famous for a supposed alien spaceship crash in 1947. Some conspiracy theorists believe remains from the Roswell crash were taken to Area 51, a secret military base near Rachel, Nevanda, to study. More than two million people have signed up to storm Area 51 in September 2019.

More than two million people have signed up during the past two months to converge on Area 51, the air base near Rachel, Nevada, with hopes of seeing aliens. Although the organizer has called the “Storm Area 51" event a hoax, city officials estimate that 30,000 to 40,000 people could show up this weekend.

Each year, Area 51’s mythology draws tourists from around the world. People come to catch a glimpse of otherworldly aircrafts and the mysterious base, which may house foreign spacecrafts. Some of the legend of Area 51, which has been discredited for years, is based on true events—if you know the history of Area 51.

A secret base in the desert

About 120 miles northwest of Las Vegas, somewhere between mile markers 29 and 30 along Nevada’s “Extraterrestrial Highway” (State Highway 375), lies an unmarked dirt road. Although no buildings are visible from the asphalt, the track leads to Groom Lake or Homey Airport—as it’s called on civilian aviation maps. For those in the know, it leads to a military base with many unofficial names: Paradise Ranch; Watertown; Dreamland Resort; Red Square; The Box; and The Ranch; Nevada Test and Training Range; Detachment 3, Air Force Flight Test Center (Det. 3, AFFTC); and Area 51.

Before World War II, the area near Groom Lake was used for silver and lead mining. Once the war began, the military took over the remote area and began conducting research: mainly nuclear and weapons testing.

When the CIA started developing spy reconnaissance planes during the Cold War, then-CIA Director Richard Bissell, Jr. realized a private was needed to build and test prototypes. In 1955, he and Lockheed aircraft designer Kelly Johnson selected the secluded airfield at Groom Lake to be their headquarters. The Atomic Energy Commission added the base to the existing map of the Nevada Test Site and labeled the site Area 51.

Within eight months, engineers developed the U-2 plane, which could soar at an altitude of 70,000 feet—much higher than any other aircraft at the time. This allowed pilots to fly well above Soviet radar, missiles, and enemy aircraft. (Read how Area 51 engineers used cardboard to mislead Soviet spy satellites.)

After a U-2 was shot down by a Soviet anti-air missile in 1960, the CIA began developing the next generation of spy plane at Area 51: the titanium-bodied A-12. Nearly undetectable to radar, the A-12 could fly across the continental United States in 70 minutes at 2,200 miles an hour. The plane also was equipped with cameras that could, from an altitude of 90,000 feet, photograph objects just one-foot long on the ground.

With all of the high-tech flights out of Area 51—including more than 2,850 takeoffs by the A-12—reports of unidentifiable flying objects skyrocketed in the area. “The aircraft’s titanium body, moving as fast as a bullet, would reflect the sun’s rays in a way that could make anyone think, UFO,” sources told journalist Annie Jacobsen for her book on Area 51.

Area 51 became forever associated with aliens in 1989 after a man claiming to have worked at Area 51, Robert Lazar, gave an anonymous interview with a Las Vegas news station. Lazar claimed that Area 51 housed and studied alien spacecraft and that his job was to re-create the technology for military use. However, Lazar’s credentials were soon discredited: according to school records Lazar never went to the Massachusetts Institute of Technology or California Institute of Technology, as he claimed.

At the time though, engineers at Area 51 were studying and re-creating advanced aircraft -- just aircraft acquired from other countries, not from outer space. Nevertheless, the notion that Area 51 houses alien spacecraft still lingers today.

Is the truth out there?

The government formally acknowledged the existence of Area 51 for the first time in 2013 when the CIA declassified documents about the development of the U-2 and A-12. Previously, locals knew something odd was happening in the desert but details were scarce and hard to verify.

Area 51 is still an active base developing cutting edge military technology. Historians know what type of aircraft was being developing until the 1970’s but after that, it’s a top-secret mystery. It will be a few more decades, at least, until current work is declassified and available to the public.

The site continues to be a pillar of U.S. alien mythology. A recent interview with Lazar on a popular podcast inspired the “Storm Area 51” event, which has since morphed into a festival celebrating all things alien. Even without the event, Area 51 draws believers and skeptics who frequent the small but thriving trail of alien-themed museums, restaurants, motels, parades, and festivals.

Please be respectful of copyright. Unauthorized use is prohibited.
Photographer Jennifer Emerling has spent time photographing UFO culture in the American West. See more photos from the project on her website Welcome, Earthlings and her Instagram.