Some Arctic ground no longer freezing—even in winter

Data from two Arctic sites suggest some surface layers are no longer freezing. If that continues, greenhouse gases from permafrost could accelerate climate change.

Photograph by Katie Orlinsky, National Geographic
Read Caption
Ground collapses at Duvanny Yar, a permafrost megaslump along the Kolyma River in northern Siberia. New research suggests that some land in Arctic Alaska and Russia may no longer freeze at all. This constantly moving landslide, driven by erosion and sped up by warming temperatures, is an important research site for scientists, who use it to track what happens as carbon-rich land that has been frozen for centuries begins to thaw.
Photograph by Katie Orlinsky, National Geographic

Data from two Arctic sites suggest some surface layers are no longer freezing. If that continues, greenhouse gases from permafrost could accelerate climate change.

Nikita Zimov was teaching students to do ecological fieldwork in northern Siberia when he stumbled on a disturbing clue that the frozen land might be thawing far faster than expected.

Zimov, like his father, Sergey Zimov, has spent years running a research station that tracks climate change in the rapidly warming Russian Far East. So when students probed the ground and took soil samples amid the mossy hummocks and larch forests near his home, 200 miles north of the Arctic Circle, Nikita Zimov suspected something wasn't right.

In April he sent a team of workers out with heavy drills to be sure. They bored into the soil a few feet down and found thick, slushy mud. Zimov said that was impossible. Cherskiy, his community of 3,000 along the Kolyma River, is one of the coldest spots on Earth. Even in late spring, ground below the surface should be frozen solid.

Except this year, it wasn't.

Every winter across the Arctic, the top few inches or feet of soil and rich plant matter freezes up before thawing again in summer. Beneath this active layer of ground extending hundreds of feet deeper sits continuously frozen earth called permafrost, which, in places, has stayed frozen for millennia.

But in a region where temperatures can dip to 40 degrees below zero Fahrenheit, the Zimovs say unusually high snowfall this year worked like a blanket, trapping excess heat in the ground. They found sections 30 inches deep—soils that typically freeze before Christmas—that had stayed damp and mushy all winter. For the first time in memory, ground that insulates deep Arctic permafrost simply did not freeze in winter.

The discovery has not been peer-reviewed or published and represents limited data from one spot in one year. But with measurements from another scientist nearby and one an ocean away appearing to support the Zimovs' findings, some Arctic experts are weighing a troubling question: Could a thaw of permafrost begin decades sooner than many people expect in some of the Arctic's coldest, most carbon-rich regions, releasing trapped greenhouse gases that could accelerate human-caused climate change?

Already, three of the last four years have been earth's hottest on record, with 2018 on schedule to be number four. And the poles are actually warming far faster, with areas 300 miles north of the Arctic Circle in Norway reaching 90 degrees Fahrenheit this July. If significant quantities of permafrost start thawing early, that would only make things worse.

"This is a big deal," says Ted Schuur, a permafrost expert at Northern Arizona University. "In the permafrost world, this is a significant milestone in a disturbing trend—like carbon in the atmosphere reaching 400 parts per million."

Nearly a quarter of the Northern Hemisphere's landmass sits above permafrost. Trapped in this frozen soil and vegetation is more than twice the carbon found in the atmosphere.

As fossil-fuel burning warms the Earth, this ground is thawing, allowing microbes to consume buried organic matter and release carbon dioxide and shorter-lived methane, which is 25 times as potent a greenhouse gas as CO2. 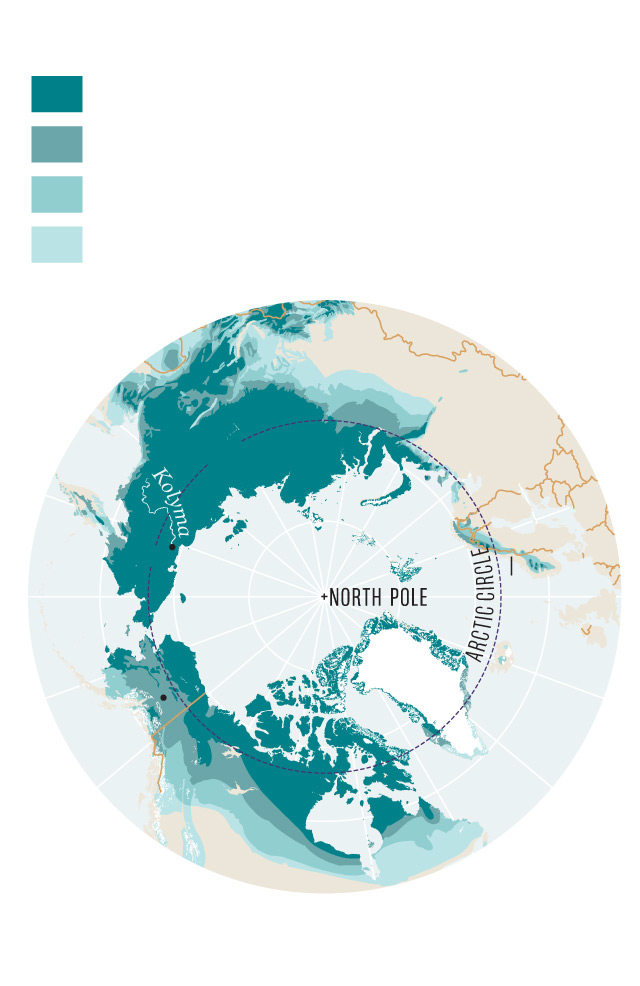 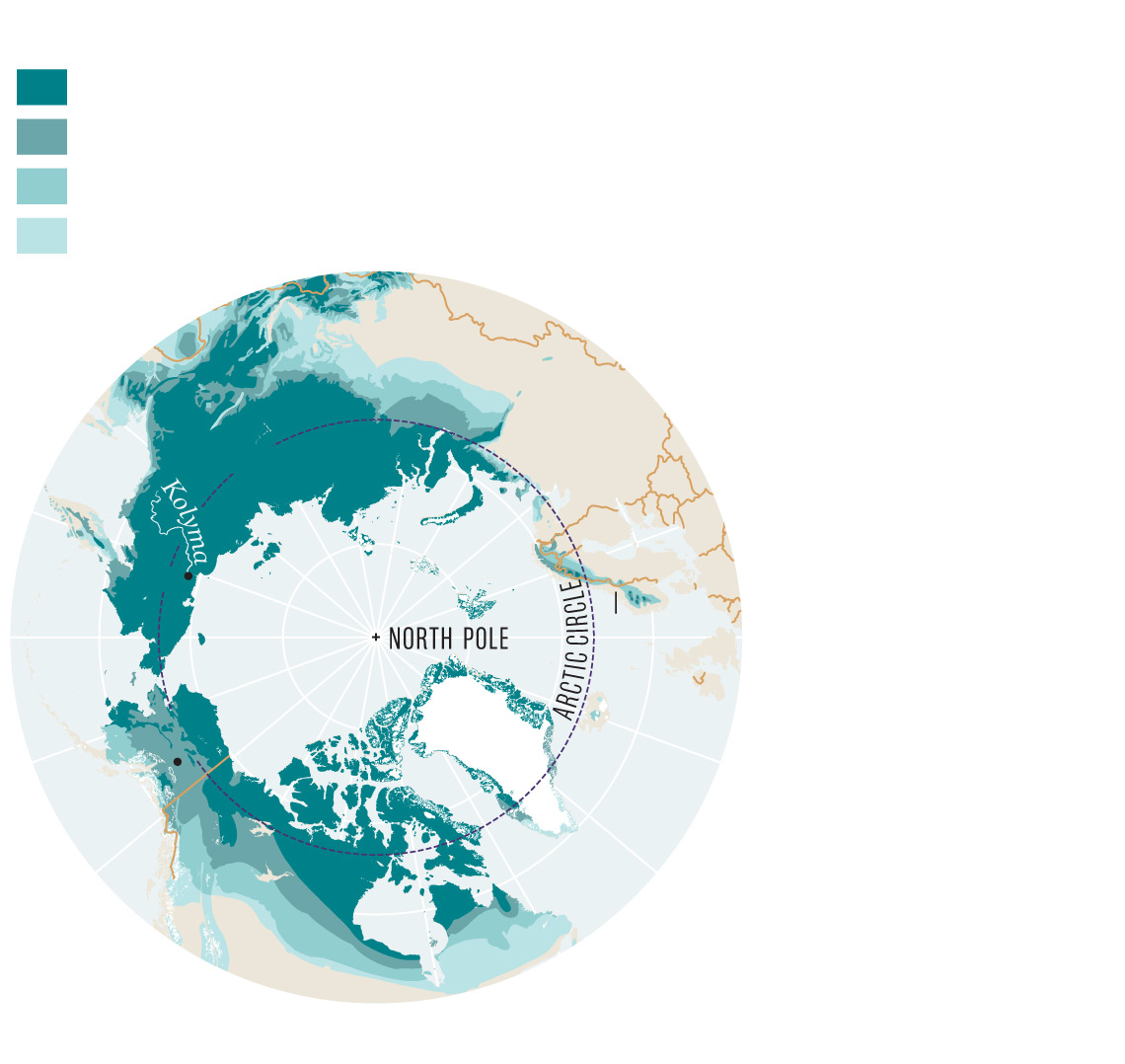 Permafrost temperatures across the Arctic have been rising since at least the 1970s—so much that small-scale localized thawing is already underway in many places. But the vast majority of this frozen land is still insulated by an active layer of freezing and thawing ground above it.

Now signs are emerging that the annual freeze-up can quickly change.

Eleven miles downriver from where the Zimovs’ started their drilling, Mathias Goeckede with Germany's Max Planck Institute for Biogeochemistry spends weeks each summer traversing crumbling boardwalks over spongy Siberian ground. He tracks carbon exchange between the earth and the atmosphere.

Measurements at his site show that snow depth there has roughly doubled in five years. When excessive snow smothers the ground, warmth below the surface may not dissipate during winter. Data from a drill hole on Goeckede's site appears to capture that phenomenon: In April, temperatures 13 inches below ground there increased roughly 10 degrees Fahrenheit in that same five-year period.

"This is just one site, and it's just five years, so this really should be considered just a case-study," Goeckede says. "But if you assume it's a trend or that it might continue like this, then it's alarming."

Thousands of miles away, Vladimir Romanovsky saw something similar. Romanovsky, a permafrost expert at the University of Alaska, Fairbanks, runs some of the most extensive permafrost monitoring sites in North America, with detailed records going back 25 years, and in some cases longer.

"For all years before 2014, the complete freeze-up of the active layer would happen in mid-January," he says. "Since 2014, the freeze-up date has shifted to late February and even March."

But this winter, Fairbanks, too, saw extremely heavy snow. And for the first time on record, the active layer at two of Romanovsky's sites didn't freeze at all.

"This is really a very important threshold," he adds.

Reasons to Be Skeptical

Of course, Arctic weather is famously variable. A few years of heavy snow in some regions could give way quickly to a long stretch of dry cold years.

Some scientists are also torn about work by the Zimovs, which isn't as rigorous as many western researchers are accustomed to. The Zimovs’ findings didn't include temperature data, nor could they point to long-term records. Many of the sites they examined also had been disturbed by human activity or non-native animals, which makes soil more susceptible to warming.

"Digging holes in a handful of places is hardly rigorous science," says Matt Sturm, a snow expert at the University of Alaska, Fairbanks.

Charles Koven, a permafrost expert at Lawrence Berkeley National Laboratory, sees cause for skepticism and more research. "I don't know what to think without knowing more about the history of these sites,” he says. “On the other hand, we don't want to ignore warning signs if they're there."

What’s more, compared to Romanovsky and Goeckede, who are measured and methodical researchers, Sergey Zimov is something of a catastrophist-philosopher, who leans toward pessimistic projections and grand gestures. He and his son are the pair behind Pleistocene Park, a region in their stretch of Siberia roamed by imported large mammals, from bison to yaks and horses. It is part of an experiment to mimic the mammoth steppe ecosystem that ended 12,000 years ago to see how permafrost responds.

At the same time, Sergey Zimov was also one of the first scientists anywhere to show that Siberia contains enormous reserves of especially carbon-rich permafrost. And he has worked in Cherskiy for more than 40 years and is held in high regard by many researchers.

"He knows that landscape so well that he is very rarely wrong," says Katey Walter Anthony, an associate professor at the University of Alaska, Fairbanks, who studies methane in Arctic lakes. "For him to believe a process is important is valuable."

Romanovsky knows the Zimovs, too, and says that while he wishes their work included temperature data, checking freeze depth is a sound approach. "That's still a convincing method," Romanovsky says. "For me, it just means it's not 100 percent."

It's also not clear how widespread a region Romanovsky's and the Zimovs' findings represent. It is a small sample size.

But Romanovsky says his sites were chosen because they fairly represent central Alaska.

"So, we assume that freeze-up didn't happen this winter within large areas in the Alaskan Interior," he says.

And even scientists uncomfortable with the limited data say the possibility that something so fundamental could change so quickly gives them pause.

"It's worrisome," says Sue Natali, a permafrost expert, also with Woods Hole, who saw an active layer not re-freeze recently during a research trip to Alaska's Yukon region. "When we see things happening that haven't happened in the lifetime of the scientists studying them, that should be a concern."

The stakes are high. If a region's active layer stops freezing consistently, consequences can be swift. Once unfrozen, soil microbes in the active layer can decompose organic material and release greenhouse gases year-round—not just in summer. And it exposes permafrost below to more heat so that layer, too, can begin thawing and releasing gases.

In ice-rich soils, such as in Siberia, the ground may slump. That can buckle roads and buildings and cause ice cellars to collapse. Such depressions also alter the landscape by forming troughs and bowls where snow can accumulate, making the ground even warmer in winter. Those troughs can fill with rain and snowmelt, forming new wetlands and tundra lakes, both of which expel large amounts of methane.

And the movement of all this water, above and below ground, can transport large amounts of heat, hastening thawing. Permafrost collapse can begin feeding on itself, releasing more greenhouse gases, which fuel more warming.

No one expects permafrost will ever release all its stored carbon. Most models suggest just 10 to 20 percent at most would escape even at high human emissions scenarios.

"When we simulate these things there are a number of processes the models don't include—processes that multiply the transfer of heat," says Daniel Fortier, an associate professor of geography with the University of Montreal. "I think it's safe to say that things are happening faster than we were expecting."

For example, scientists have long known that loss of sea ice and rising temperatures will lead to more Arctic snow over time, which models are able to incorporate. But those same simulations are far less reliable when trying to track the cascading shifts in soil types, surface vegetation, melting ice, and the flow of water that will come from rising temperatures and all that snow, all of which could substantially hasten permafrost thaw.

"The models can't handle those landscape-scale changes, all of the processes that could lead to rapid change," says David Lawrence, a permafrost modeler with the National Center for Atmospheric Research in Boulder. "And it's going to be a long time before they can."

By the time some changes are detected, a significant transition may be underway, he says. That means the public and policymakers may not grasp the real risks.

"Most models don't project major carbon releases until beyond 2100," Walter Anthony says. That may be the case. But it's also possible, she says, that they "could actually happen in my children's lifetime—or my own."