As the climate warms up, cities in the northern part of the country will start to resemble their southern brethren.

Want a glimpse of Washington, D.C.'s climate future? Take a road trip down to Greenwood, Mississippi. In just a few decades, as climate change heats up the planet, that same swelter is likely to be de rigueur in D.C. Meanwhile, down in Mississippi, seasons will morph into something like those in northern Mexico today. 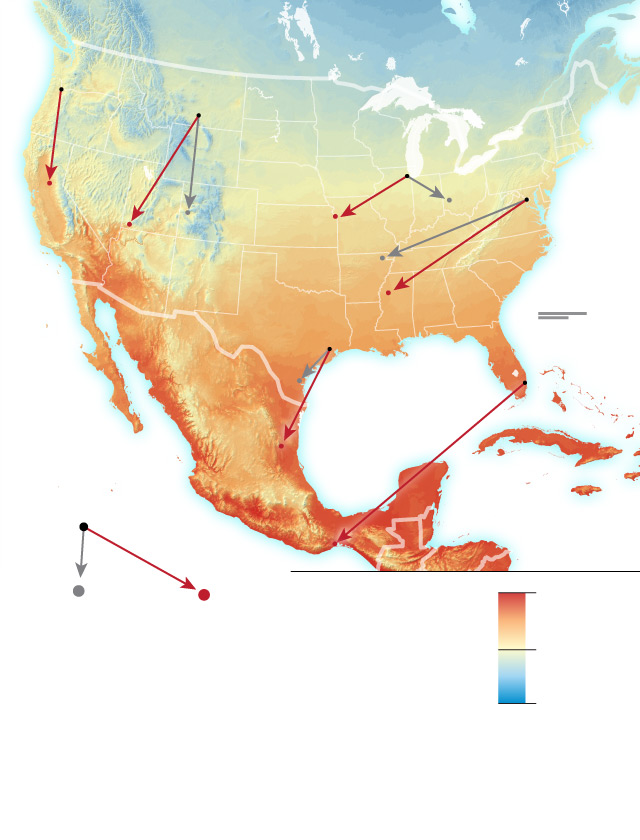 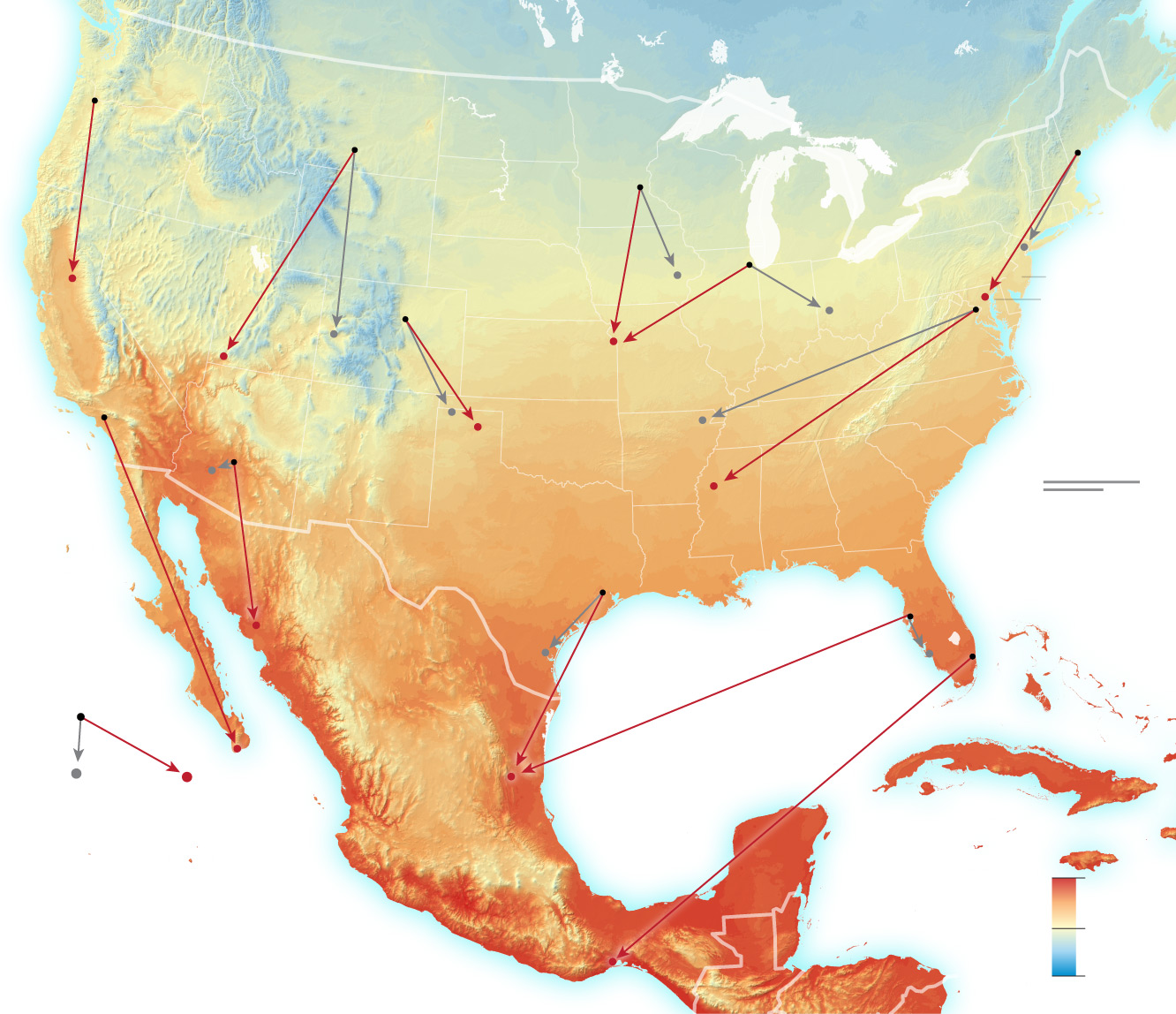 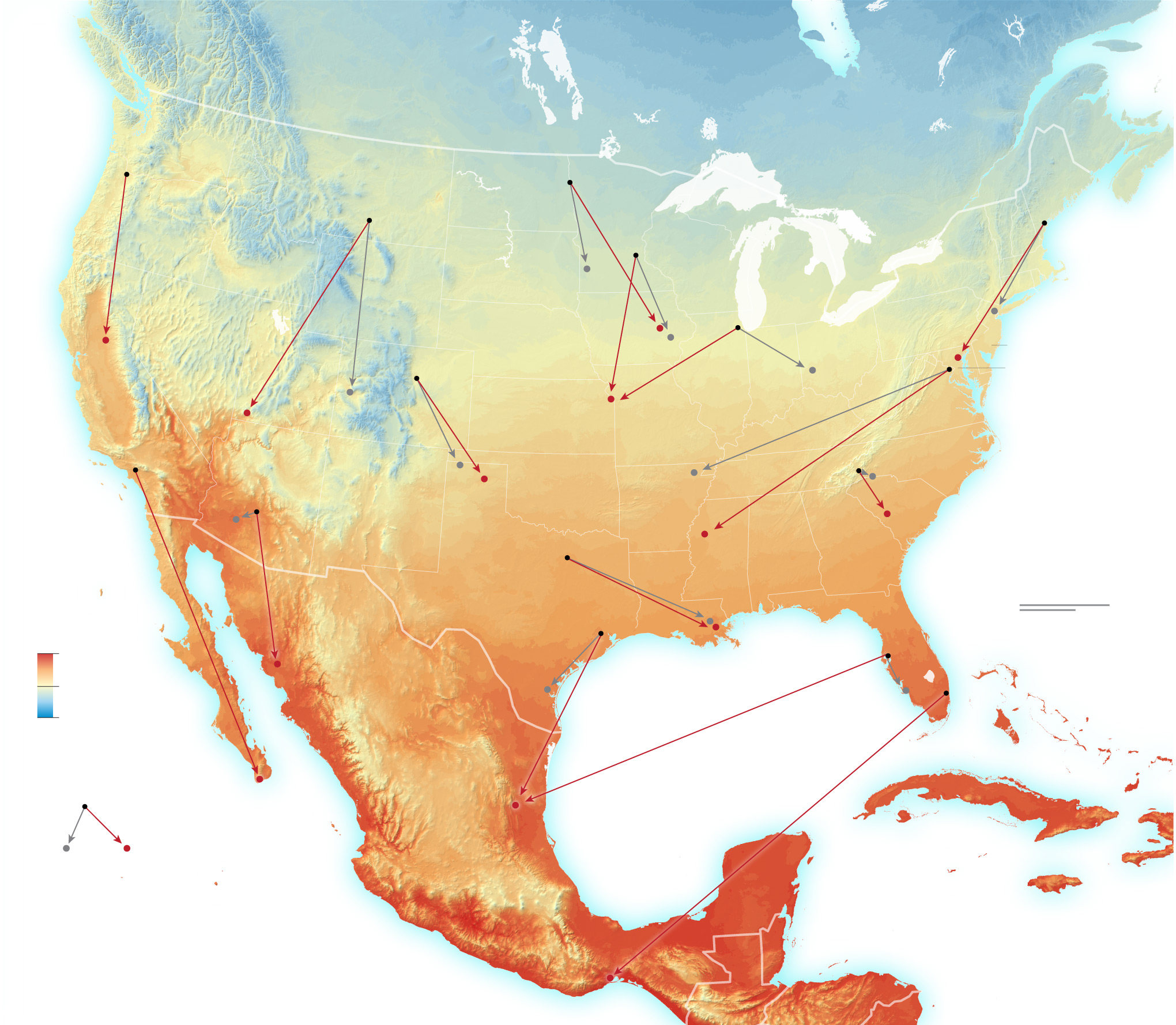 So winters in Minneapolis, Minnesota, will soften so they resemble the season as it currently exists in Lansing, Kansas. Spring in Wasilla, Alaska, may come as early as Marinette, Wisconsin’s does today.

Warmer winters may sound nice, says Matt Fitzpatrick, an ecologist at the University of Maryland Center for Environmental Science and the lead author of the study. But they come with a huge cost: It’s not just temperature and snow or rain that will change as climate shifts, but the whole ecological world.

“The direct effects of climate change are bad enough, but natural systems are tightly linked with climate,” he says. “If these changes come rapidly, those systems are going to get out of whack—so this has potentially massive implications for forests, water supplies, farming—all kinds of things,” he says.

The hunt for tomorrow

Over beers one afternoon at a bar in Tennessee, Fitzpatrick and a colleague decided to try to map out North America’s future. They built a tool that outlined what a “normal” year looks like in 540 cities across the continent, temperature- and precipitation-wise. Then they looked at what models predicted those same cities would be like during each season 60 years in the future (you can find your own city using their interactive tool).

They looked at two different scenarios. First, they considered a future where humans take hold of carbon emissions and reduce them aggressively within the next few decades—RCP 4.5, in climate policy parlance. RCP stands for "Representative Concentration Pathway" and describes how greenhouse gas emissions will proceed in the future. The 4.5 scenario is considered an intermediate pathway—not the best-case scenario (known as RCP 2.6), in which emissions drop off quickly within the next few years, but not the worst-case scenario (RCP 8.5), where greenhouse gas emissions continue unabated.

Then, they looked at that “worst-case” scenario. (Fitzpatrick points out, though, that recent estimates show that the planet is essentially tracking along this path now—meaning the “worst case” could, in fact, be even worse).

The patterns for how cities would change was similar between the two scenarios. Most places in the Northeast would get warmer and wetter, settling into a steamy humid state now commonly associated with the Southeast. In the western U.S., cities will generally get hotter and drier.

(Read about how heat waves are getting more intense—and deadly).

The difference was how much. In the better-case scenario of climate change—where emissions start slowing down soon—cities will look, on average, like ones 300 miles away from them today. But in the worst-case scenario, that distance jumps to over 500 miles.

“What we found really showed me that reducing emissions can have a big impact on how things develop,” says Fitzpatrick. Only recently, he and his young daughter had hiked through the snowy mountains near his hometown in Tennessee with his young daughter. In the worst-case scenarios, it’s far from certain that she’d be able to feel the same cold flakes on her cheeks by the time she’s in her 60s.

Last fall, the Intergovernmental Panel on Climate Change (IPCC) released a report warning that even warming the planet up by, on average, 1.5 degrees Celsius (2.7 degrees Fahrenheit) could induce devastating effects by as soon as 2040.

When “we’re talking about one degree, 2 degrees, 3 degrees—it looks very small compared to the difference between summer and winter,” says Stéphane Hallegate, a climate expert at the World Bank who was not involved in the study. That makes it tricky to understand how big a deal that much warming would be for Earth.

But just a few degrees of difference can have huge impacts. About 20,000 years ago during the height of the last ice age, when ice sheets nosed down as far south as New York City, air temperatures were only between about two to 10 degrees Celsius cooler across the planet than they are today—and the world as we know it was completely reshaped.

“So what these maps aren’t showing is a lot more concerning than what they do show,” says Jennifer Marlon, a scientist and science communication expert at Yale who was not involved in the study.

“We're not just talking about changing the temperature of a city, or its precipitation: We're talking about so much more,” she says. “We’re talking about shifting the entire climate of latitudinal bands and also about changing the variability of the weather in those places. Minneapolis-Saint Paul is going to feel like Kansas City, sure—like Kansas City but with less food, less water, a damaged grid, and all of these other systemic problems we're walking into if we don’t address climate change.”