A new study warns that many of the benefits rivers provide, from water to food to flood control, are increasingly at risk thanks to dams and diversions.

Only about one-third of the world’s longest rivers remain free-flowing, meaning they have not been dammed or disrupted in man-made ways, reports a new landmark study. While there are a few exceptions, like Asia’s 1,700-mile long Salween River, most of the remaining free-flowing rivers longer than about 600 miles are now restricted to remote regions of the Arctic and to the Amazon and Congo Basins.

Scientists warn that such fragmentation of the world’s major rivers, caused mainly by dams, threatens the ecosystem services that both people and wildlife depend on for their survival. Free-flowing rivers, they say, provide food for hundreds of millions of people, deliver sediments crucial to agriculture, mitigate the impact of floods and droughts, and underpin a wealth of biodiversity.

“This is the most comprehensive assessment of river connectivity that’s ever been done, and it shows we are losing our longest, free-flowing rivers,” says Michele Thieme, lead freshwater scientist at the World Wildlife Fund, which spearheaded the mapping project together with McGill University in Quebec, Canada.

Only 37 percent of world’s largest rivers are free of dams or other disruptions. Free-flowing rivers are found primarily in the Amazon and Congo Basins, and in the Arctic. 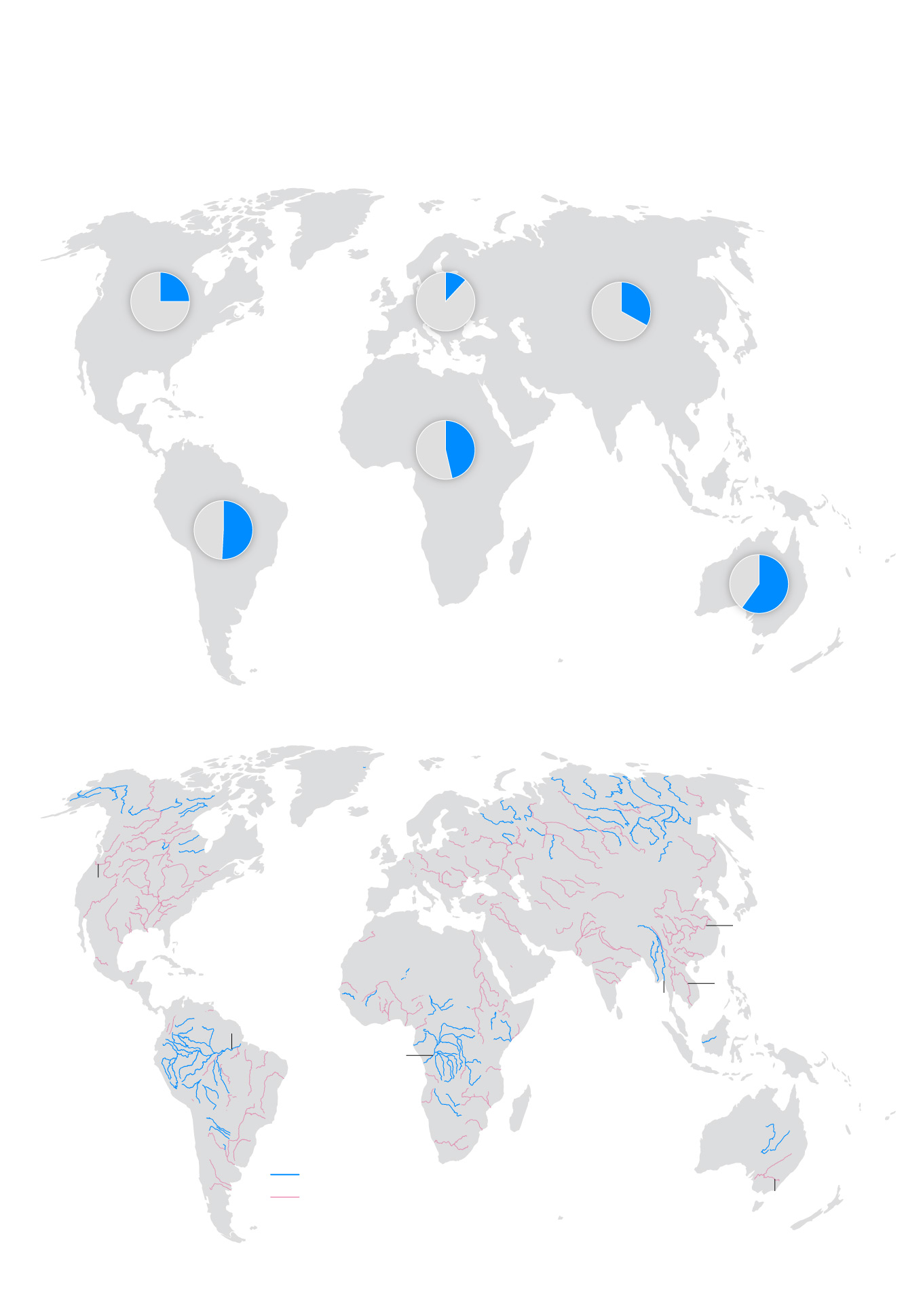 Only 37 percent of world’s largest rivers are free of dams or other disruptions. Free-

flowing rivers are found primarily in the Amazon and Congo Basins, and in the Arctic.

Percentage of very large rivers (longer than 1,000 km) that remain free-flowing, by continent

“The benefits of free-flowing rivers are countless,” says Denielle Perry, a water resources geographer at Northern Arizona University in Flagstaff. “Rivers are the lifeblood of the planet.”

Using satellite imagery and other data, the team of 34 international researchers mapped 7.5 million miles of rivers worldwide. “It’s the culmination of more than a decade of data processing and preparation,” says Günther Grill, a McGill University geographer and lead author on the study, which published Wednesday in the scientific journal Nature.

The researchers found that the longer the river is, the greater the likelihood of it being impeded. While 97 percent of the world’s shortest rivers (those no longer than 62 miles) still remain free-flowing, only very few rivers longer than 310 miles remain that way in the United States, China, western Europe, and other parts of the world.

Dams and reservoirs are by far the main disruptors, the study found, though activities such as water extraction and sediment trapping also hinder flow in many rivers around the world. According to the analysis, there are today 60,000 large dams worldwide, with more than 3,700 currently planned or under construction, though the latter figure may actually be far higher. There are, for example, 3,000 hydropower plants in the pipeline in just the Balkan region of eastern Europe, according to a report from the Save the Blue Heart of Europe campaign group.

Most of the long, free-flowing rivers are found in remote and inaccessible regions where hydropower development may not have been feasible in the past. As engineering technology improves, however, this is now changing. In the world’s largest river basin, the Amazon in South America, there are plans for up to 500 dams to be built across the region. “This would completely change the ecology of the system,” says Perry, who has worked extensively in the Amazon.

In Africa, many countries are turning to hydropower to meet growing energy needs. But critics warn that some of the planned projects are ill-advised. For example, there are concerns that a proposed dam on Zambia’s Luangwa River, one of the longest free-flowing rivers in southern Africa, would have trouble operating because of seasonal fluctuations in the river.

“It makes no sense to build the dam there,” says Thieme, adding that the dam would flood large areas, displacing thousands of people and destroying pristine habitat for lions, elephants, and other wildlife.

One hotspot for hydroelectric development is Southeast Asia, where Laos alone plans to build more than 50 dams along the Mekong River and its tributaries.

“The fear is that the Mekong River will gradually become so fragmented that it will lose function and no longer be able to support the huge diversity of wildlife and the millions of people who depend on it,” says Zeb Hogan, a study co-author and fish biologist at the University of Nevada, Reno, who leads a USAID-funded research project called Wonders of the Mekong (Hogan is also a National Geographic Explorer and TV host and his project has received support from the National Geographic Society).

Because hydropower is a renewable energy source, its proponents often portray it as a green alternative that should be pursued to combat climate change. However, many scientists, especially those working on fish-related issues, push back on that notion.

“Hydropower might be renewable, but it’s not green,” says Herman Wanningen, an aquatic ecologist and creative director of the World Fish Migration Foundation in Groningen, Holland. “When a dam is put in, the free-flowing river suddenly becomes a stagnant reservoir, the natural habitat disappears, and with it the fish.”

Even worse, says Wanningen, the water in reservoirs created by dams is actually made warmer because it is not flowing as freely, exacerbating the problem.

Dams are most troublesome to migrating fish, which may not be able to reach crucial spawning grounds. Rivers like the Columbia in the western United States, which was once home to the largest salmon runs in the world, saw fish stocks completely crash after they were dammed.

In China, the installation of giant hydroelectric plants, such as the Ghezouba and Three Gorges Dams on the Yangtze River, has led to the likely extinction of the Chinese paddlefish, one of the world’s largest freshwater fish species.

Meanwhile, on the world’s driest non-polar continent, Australia, most rivers have had their water diverted for irrigation purposes, with fish often channeled into new, inferior habitats. Earlier this year, poor river flow in the Murray-Darling river basin, caused in part by excessive water extraction, contributed to a massive die-off of up to one million fish, including Murray cod, which can grow almost six feet long and is listed as critically endangered on the IUCN Red List of Threatened Species.

Lee Baumgartner, a freshwater fish ecologist at Charles Sturt University in Sydney, says overall fish populations in Australia are at an estimated 10 percent of what they were before industrialization, when the country’s rivers began to be modified.

While hydropower development is continuing unabated in some parts of the world, there are signs that it is slowing down in others. China, which has far more dams than any other country, has scrapped many new domestic hydropower projects, including a cascade of dams on the upper Salween River, though Chinese companies are still involved in the building of many dams outside of China.

In parts of the Balkan region, which has by far the highest concentration of free-flowing rivers in Europe, plans to build a myriad of dams, many of them inside national parks and other protected areas, are increasingly being challenged by activists, and with some success. Earlier this year, large demonstrations against a series of proposed hydropower plants in Kosovo led to the government there ordering a moratorium on new dam construction in the country.

That is welcome news, says John Zablocki, a biodiversity expert with the Nature Conservancy, who has worked extensively on fish recovery issues in the Balkans. He cautions, however, that activists must be pragmatic in their approach. “A country like Albania gets close to 100 percent of its energy from hydropower,” he says. “Taking hydro away completely is not feasible. What we want to do is look at alternatives.”

The United States, which has more than 80,000 dams of all sizes, gets 7 percent of its energy from hydropower. There are no plans to build any more hydropower plants in the country. Instead, the U.S. has embarked on a large-scale effort over the last several decades to take down dams and restore rivers. So far, nearly 1,500 dams have been removed throughout the country. Two of those, the Elwha and Glines Canyon Dams on the Elwha River in the Pacific Northwest, were removed in 2012 and 2014, respectively. Since then, several species of adult fish, including sockeye salmon and bull trout, have returned to the Elwha.

Similar dam removal projects are underway in western Europe, with France, for example, planning to soon remove two large dams from the Selune River in Normandy. Meanwhile, a project called Dam Removal Europe is focusing on clearing European rivers of the 30,000 old or obsolete dams that still exist. “This would open up thousands of kilometers of new river habitat,” says Wanningen, the Dutch ecologist, who is involved with the project.

Christer Nilsson, a landscape ecologist at Umeå University in Sweden and a co-author on the Nature paper, says having the baseline data on global river connectivity will hopefully help governments and other actors to plan their management of rivers more sustainably.

“We know so much more now than we used to about the ecological, economic, and social value of rivers, and that installing dams in them comes at a cost,” says Nilsson. “It’s just sad that we have destroyed so much before realizing that maybe [building all of them] wasn’t such a good idea.”