Like many plastic items, cutlery often finds its way into the environment, where it poses dangers for animals and can take hundreds of years to break down.

Plastic cutlery is everywhere, and most of it can be used only once. Billions of forks, knives, and spoons are thrown away each year. But like other plastic items—such as bags and bottles—cutlery can take centuries to break down naturally, giving the plastic waste ample time to work its way into the environment.

The Ocean Conservancy lists cutlery as among the items “most deadly” to sea turtles, birds, and mammals, and alternatives have proven particularly difficult to come by, though not impossible.

A logical solution is to carry your own, but you’ll likely draw a few stares. For centuries, though, it would have been a faux pas to not travel with a set.

“You would come with a little carry case, and it would be your own personal knife and spoon,” says Sarah Coffin, who curated the 2006 exhibit Feeding Desire: Design and the Tools of the Table, 1500-2005 at the Cooper Hewitt design museum in New York.

Toting your own eating implements was not only a logistical must—none were usually provided—but also helped avoid illness. “If you come with your own,” explains Coffin, “you don't have to worry about someone else's germs in your soup.” What you ate with, she said, was also a status symbol of sorts. “It was a little like a pocket watch.”

Cutlery for the masses was commonly made of wood, stone, or shells. More ornate sets could be made of gold or ivory, or even be collapsible for traveling light. By the early 1900s sleek and rust-resistant stainless steel started to make an appearance. By World War II, an even newer material had worked its way into the cutlery mix: plastic.

At first, plastic cutlery was considered reusable. Chris Witmore, a professor in archaeology and classics at Texas Tech University, remembers his grandmother washing her plastic tableware. But as the post-war economy boomed, the frugal habits instilled by the Great Depression and an agrarian history faded.

“After the mid-twentieth century overabundance comes to define how the majority live,” says Whitmore. That, he says, gave rise to a “throw-away culture.”

“The Americans were the disposable kings,” says Coffin. Among other inventions was the plastic spork, which The Van Brode Milling Company patented in 1970. But Coffin said the French affinity for picnics also helped spur the single-use boom.

Designer Jean-Pierre Vitrac, for example, invented a plastic picnic tray that had a fork, spoon, knife, and cup built right into it. You’d break them off to use, and just throw everything away after you were done. The sets were even available in bright colors—which Coffin said also helped make plastics popular.

That marriage of culture and convenience led to companies such as Sodexo, a French firm that's one of the world’s largest food-service providers, to turn to plastic. “[Convenience] really made this whole disposal space become part of our everyday life,” says Judy Panayos, Sodexo’s senior director of sustainability in supply management.

Today, the company buys 44 million disposable utensils per month in the U.S. alone. Globally, plastic cutlery is a $2.6 billion business.

But convenience has come at a cost. Like many plastic items, utensils often find their way into the environment. According to beach-cleanup data compiled by the non-profit 5Gyres, utensils are the seventh most commonly collected plastic item. 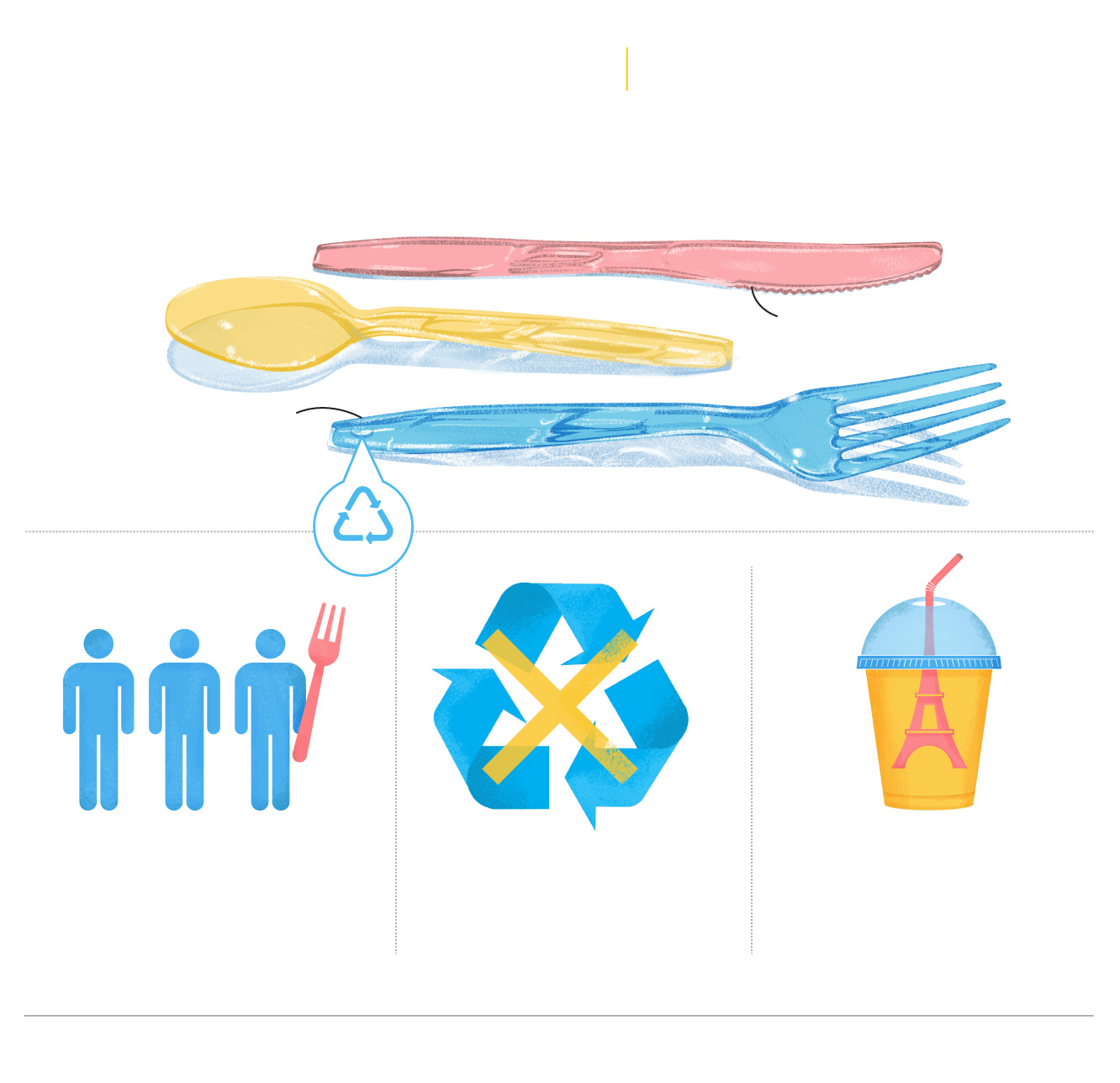 Single-use utensils can take up to 1,000 years to decompose.

“Food and beverage disposables are overwhelmingly at the top of the list,” said Anna Cummins, executive director of 5Gyres, intentionally highlighting the whole category.

She argues that environmentalists’ recent focus on individual items—whether bags, straws, or otherwise—isn’t working and that the sector needs to be addressed more holistically. “A focus on single products, while it's important, is not going to move the needle to the degree that we need.”

In January, a Hi Fly plane took off from Lisbon, bound for Brazil. As on the Portuguese airline’s other journeys, the attendants served drinks, food, and snacks—but with a twist. According to the airline, this was the first passenger flight in the world to be completely free of single-use plastics.

Hi Fly used a range of replacement materials, from paper to plant-based disposables. The cutlery was made from reusable bamboo, which the airline planned to take back to its catering facilities and wash—as many as 100 times.

The flight, the airline said, was its first step toward eliminating all single-use plastics by the end of 2019. Others have followed suit; Ethiopian airlines marked April’s Earth Day with a plastics-free flight of its own.

Cutlery is part of the broader anti-plastics backlash. In 2016, France was the first country to ban plastic dinnerware. People around the world are experimenting with alternatives to plastic that range from potato starch and areca leaves to grain-based edible cutlery.

Sales of such plastic substitutes remain relatively low, often hindered by higher costs and sometimes questionable environmental benefits. So-called bioplastic options, for example, made from plant-based materials, can require specific conditions to break down, and even they take energy and water to produce. But the market for them and for other forms of biodegradable cutlery is growing.

A new take on single use

A host of companies are creating utensils from plant-based materials, including wood. Some of them source materials from fast-growing trees like birch or bamboo; Canadian brand Aspenware includes excess wood from the lumber industry in its utensils.

A line of disposable wooden cutlery called Clickeat is one example. A set of thin utensils (fork, knife, and an optional spoon) that’s linked at the handle, it snaps apart into individual instruments that can be disposed of after they’re used.

Adler first realized the extent of the plastic waste issue about 10 years ago, while surfing with a friend in Chile. The beach was covered in plastic litter. Alarmed, Adler started talking with others about how to best address the issue.

While Adler sees Clickeat as preferable to many other options out there—especially bioplastics—he insists he’s not trying to keep people from finding other solutions, like carrying their own cutlery; he merely wants to provide better options.

“Our goal is not to replace reusable things,” he said. “We're trying to redefine the concept of single use.”

In China, environmentalists have campaigned for people to carry their own chopsticks. The online marketplace Etsy has a whole section dedicated to reusable cutlery. And the BYO cutlery movement appears to be gaining steam.

“I carry them around in my backpack,” says Panayos of her reusable cutlery.

Sodexo has more broadly committed to phasing out single-use plastic bags and polystyrene foam food containers, as well as making straws a “by request” item.

But Panayos says plastic utensils remain particularly vexing to replace on a large scale. Problem spots include facilities that have limited dishwashing capabilities and places like prisons where more pliable, less dangerous, options are necessary.

Says Chris Whitmore, the Texas Tech professor: “When plastics turn out to be everywhere and ingested by everything, the only direction one can go is reduction."