A billion toothbrushes will be thrown away in the U.S. this year, most of them plastic. How did we get here, and can we change?

Toothbrush design is little changed from its earliest form. The biggest difference is in the materials: toothbrushes are now all made of at least some plastic. Take a tour of the humble toothbrush and find out how it affects the environment.

A billion toothbrushes will be thrown away in the U.S. this year, most of them plastic. How did we get here, and can we change?

Toothbrush design is little changed from its earliest form. The biggest difference is in the materials: toothbrushes are now all made of at least some plastic. Take a tour of the humble toothbrush and find out how it affects the environment.

At first, years ago, it was just an occasional piece of plastic trash that Kahi Pacarro, the founder of Sustainable Coastlines Hawaii, picked up on the beach cleanups he organized around the state. A straw here, a takeout container there. But one day Pacarro spotted something particularly surprising in the beach detritus: a toothbrush.

Now, in any given Hawaii beach cleanup, he says, it’s not uncommon to pick up 20 or even 100 toothbrushes.

The reason is simple. The total number of plastic toothbrushes being produced, used, and thrown away each year has grown steadily since the first one was made in the 1930s.

For centuries, the basic toothbrush was made from natural materials. But during the early 20th century, the giddy early days of plastic innovation, manufacturers started substituting nylon and other plastics into the design—and never looked back.

Plastic has so fully infiltrated toothbrush design that it’s nearly impossible to clean our teeth without touching a polymer. And because plastic is essentially indestructible, that means nearly every single toothbrush made since the 1930s is still out there in the world somewhere, living on as a piece of trash.

Now, some designers are looking for ways to reimagine this crucial, classic object in a way that puts less stress on the planet. But to find solutions to the toothbrush conundrum, we have to understand how we got here.

The best invention of all time?

It turns out people really love having clean teeth. In MIT’s 2003 Lemelson Innovation Index survey, the toothbrush rated higher than cars, personal computers, or cellphones as the innovation respondents couldn’t live without.

Humans have apparently felt this way for a very long time. Archaeologists have found “tooth sticks” in Egyptian tombs. The Buddha chewed sticks into fluffy-ended scrubbers to clean his teeth. The Roman author Pliny the Elder noted that “it makes teeth firm to pick them with a porcupine quill,” and the Roman poet Ovid proclaimed that it was a good idea to wash the teeth each morning.

Tooth care even occupied the mind of the reigning Chinese emperor Hongzhi in the late 1400s, who designed something that looked a lot like the brush we know today. It featured a short, dense pack of boar bristles, shaved off the neck of a hog, set into a bone or wood handle.

That simple design endured, essentially unchanged, for centuries—but not for everyone. Boar bristles and bone handles were fancy, expensive materials, meaning that only the wealthy could afford brushes. Everyone else had to make do with chew sticks, scraps of cloth, their fingers, or nothing at all. As late as the early 1920s, only an estimated one in four people in the United States owned a toothbrush.

It wasn’t until late in the 19th century that the concept of tooth care for everyone, rich and poor alike, started to trickle into the public consciousness. One of the drivers of that transition was war.

Around the time of the American Civil War in the mid-1800s, guns were loaded one shot at a time, with powder and bullets that had been pre-wrapped in twists of heavy paper. Soldiers needed to tear the twists open with their teeth, but many potential fighters lacked even the six well-anchored opposing teeth to rip the paper apart. This was obviously a problem.

The few dentists serving the Union Army despaired at the state of the teeth around them, but dental care failed to take hold as a priority for the North. The Confederate Army, in contrast, conscripted a cadre of dentists who stressed preventative care; one army dentist pushed the message so successfully that soldiers in his unit shoved their toothbrushes in their buttonholes, readily available at all times.

It took two more major military mobilizations to get toothbrushes into nearly every bathroom. By the advent of World War I, the U.S. military recognized that they had a problem, a variant on the cartridge-ripping issue from the Civil War. The otherwise healthy young men they wanted to recruit into service needed six healthy opposing teeth in order to eat the tough, dry military rations. Young man after young man failed that test.

“It’s a little unbelievable, looking from today’s vantage point,” says Alyssa Picard, a historian and the author of Making the American Mouth. “[The military] had a standard, and it’s pretty basic—have six teeth in your mouth so you can chew—and people are not meeting those standards. People who would otherwise be available for fighting? Off the list.”

By World War II, soldiers were instructed in the care and keeping of teeth; dentists were embedded in battalions and toothbrushes were handed out to troops. And when the fighters came home, they brought their tooth-brushing habits with them.

Around 3000 B.C., Babylonians chewed twigs to clean their teeth. During the 17th and 18th centuries, toothbrushes were considered luxury items. It wasn't until WWII that, due to a shortage of craftsmen, synthetic heads and handles became popular, replacing toothbrushes made of horsehair and bone.

Most of us will replace around 300 toothbrushes during our lifetime.

Toothbrushes are not recyclable since small parts get stuck in the machinery.

If you laid out the toothbrushes thrown away in the U.S. in a year, they would wrap around the Earth four times! 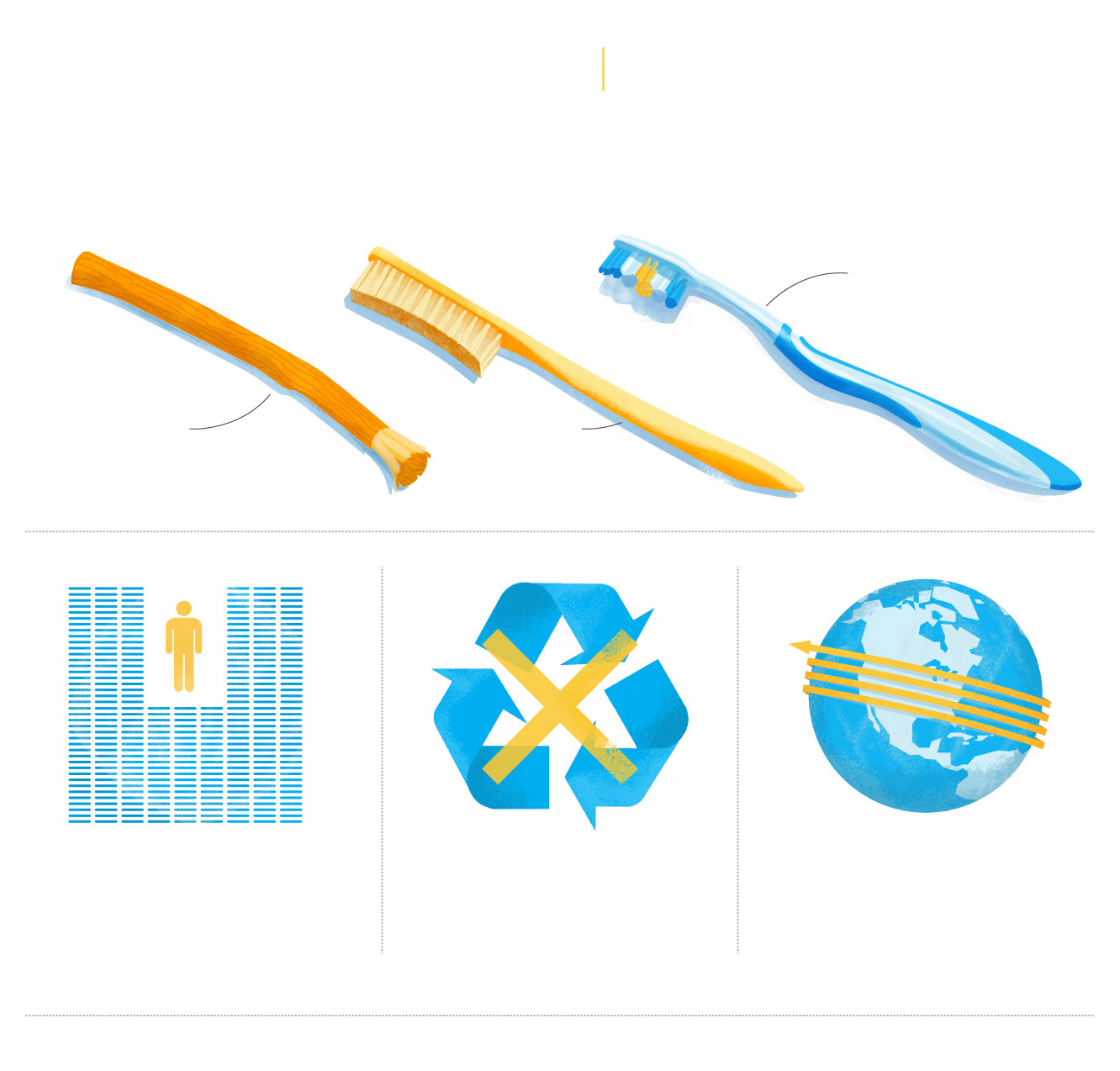 Around 3000 B.C., Babylonians chewed twigs to clean their teeth. During the 17th and 18th centuries, toothbrushes were considered luxury items. It wasn't until WWII that, due to a shortage of craftsmen, synthetic heads and handles became popular, replacing toothbrushes made of horsehair and bone.

Most of us will replace around 300 toothbrushes during our lifetime.

Toothbrushes are not recyclable since small parts get stuck in the machinery.

If you laid out the toothbrushes thrown away in the U.S. in a year, they would wrap around the Earth four times!

‘The right road to American citizenship’

Simultaneously, across the country cultural expectations around teeth were changing. Bad teeth, dentists believed, could be signs of disease, poor nutrition, and general disregard for personal hygiene. “[Dentists] saw themselves as the ministers of the health-care process,” says Picard—not just caretakers of the mouth, but of the whole body, and even of the public health writ large.

Dental experts started framing the question of dental care as a social, moral, and even patriotic issue. Public campaigns touting the benefits of healthy teeth spread across the country. “If bad teeth could be prevented,” one dentist opined in 1904, “the gain to the state and individual would be of tremendous value, as it is wonderful how many diseases can be traced indirectly to bad teeth.”

In many cases those campaigns were targeted at poor, immigrant, or otherwise marginalized populations. Dental hygiene was often wielded as a way to “Americanize” communities the primarily white dental professionals at the time saw as not fully assimilated into the dominant culture, according to Picard.

“I know that a clean mouth and a talk on hygiene has started many [immigrant coal miners] on the right road to good American citizenship,” said one Pennsylvania dentist in the early 20th century.

In the early 1900s chemists discovered that they could make a strong, glossy, moldable—and occasionally explosive—material from a mixture of nitrocellulose and camphor, a fragrant, oily substance derived from the camphor laurel tree. The material, called “celluloid,” could be made into shapes practical, fanciful, and cheap, perfect for toothbrush handles.

Soon, bristles also succumbed to the siren song of synthetics. In 1938 a Japanese national laboratory came up with a fine, silky substance it hoped would be a substitute for the silk used to make more durable parachutes for its military. Nearly simultaneously, the U.S-based DuPont chemical company rolled out its own smooth, thin-fibered material: nylon.

The silky, sturdy yet flexible material turned out to be a perfect substitute for expensive and brittle boar bristles. In 1938, a company called Dr. West’s started packing the heads of their “Dr. West’s Miracle-Tuft Toothbrush” with nylon threads. The synthetic material, it said, was “100 percent waterproof…with greater cleansing and longer life” than the old natural-bristle brushes. Dr. West's rolled out the new design nationwide, selling them for 50 cents apiece, about $8 in today’s dollars.

Since then, new types of plastic replaced celluloid in the handle, and bristle designs became more complicated, but the basic plastic-packed design has proved as durable as the material itself.

“It’s quite remarkable, actually, that the design [of the toothbrush] has stayed so similar throughout the years,” says Charlotte Fiell, a design historian from the U.K. “Basically, the function hasn’t changed, has it?”

But now designers are beginning to ask: Can we remake this essential object using little or no plastic?

Many toothbrushes are unrecyclable because the composite plastics most are now made of are difficult, if not impossible, to break apart efficiently.

In response, some companies have pivoted back to natural material, like wood or boar bristles. Bamboo handles can solve part of the problem, but most of the bamboo brushes on the market still have nylon bristles, so at least that part of the brush has to be thrown away.

Other toothbrushes, like the Radius, pack more, sturdier bristles into their heads. That helps them last longer so they need to be replaced less often—only two brushes a year instead of four.

Some companies have gone back to a design that was originally introduced nearly a century ago: toothbrushes with removable heads. Goodwell, in Portland, Oregon, produces metal handles it hopes brushers will keep for years. The head pops out when the bristles wear down, and a new one snaps in, reducing the total amount of waste to less than 30 percent of a normal brush, says Patrick Triato, one of the company’s founders.

It’s very hard to find plastic-free brush options. Biodegradable or bio-based plastics aren’t always better for the planet than their more traditional plastic counterparts, either because they don’t actually break down particularly well or because they have complicated environmental footprints in their own right.

But any option that reduces the total amount of material used and packaging is a step in the right direction. Getting people thinking about the tools they use to clean their teeth? That’s a big step too.

This article is part of National Geographic's new series, "The Story of Plastic." Every other Friday, we will tell the story of how many common plastic objects came to dominate our everyday lives—and look at how we might break our plastic habit.