Earthquakes near oil fields could persist long after drilling stops

The dense, salty water produced as a byproduct of oil and gas operations can stress fault lines even when operations cease, new research shows.

Water left over from oil and natural gas production may strengthen the magnitude of earthquakes in states like Oklahoma and Kansas, according to a new study.

“It doesn’t take a large fault to generate a damaging earthquake,” says Martin Chapman, a seismologist at Virginia Tech.

He described the small fault lines found across the country as ubiquitous. “The whole crust is fractured by these kinds of faults,” he says.

And while scientists have long known that wastewater can trigger earthquakes, the new study published in the journal Nature finds that the water may be sinking deeper than previously thought, leading to an increased proportion of higher magnitude earthquakes. Deeper, heavier water increases what’s known as pore pressure, the force that exerts on rock, making the underlying faults less stable.

In one day, millions of gallons of water can be produced as a byproduct of oil and gas drilling. Injected back into the ground, wastewater can lead to stronger earthquakes. 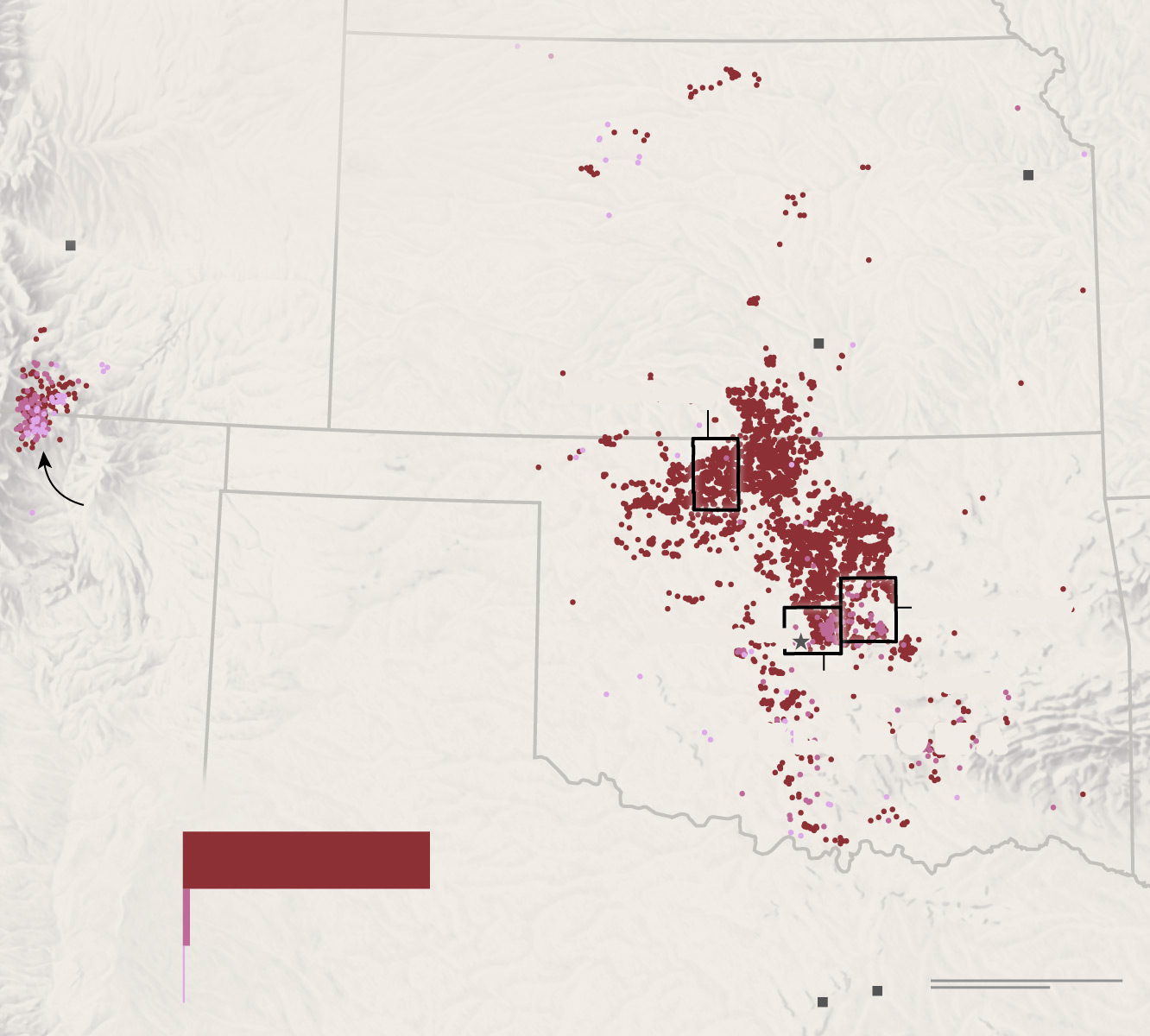 In one day, millions of gallons of water can be produced as a byproduct of oil and gas drilling. Injected back into the ground, wastewater can lead to stronger earthquakes.

The wastewater may be staying around longer than scientists thought, too.

“Even if you turn off all the pumps today, the water will continue sinking deeper and deeper,” says Ryan Pollyea, a Virginia Tech hydrologist and study author. “Now we sit and wait. Will the fluids intersect faults?”

What exactly is wastewater?

Sometimes called produced water by industry officials, wastewater is the brackish byproduct of drilling for oil and gas. It exists naturally commingled with oil and gas deposits.

According to the Produced Water Society, a group made of oil and gas industry officials, close to 900 billion gallons of wastewater are produced annually. The society says that wastewater is largely disposed of by injected it back into the ground—either by pumping it back into the oil producing rock formation or in an empty extraction well.

When it spills, as it did throughout the 1920s, the high salt content can lead to a vegetative dead zone. The “Texas Scar” in Texas’s western oil-producing region—a part of the state with high oil and gas concentrations—is yet to recover from salty water spilled a hundred years ago.

How does it lead to earthquakes?

The salty water companies inject back into the Earth can be denser than the water initially extracted.

Pollyea looked at two oil-rich formations (zones of trapped oil or gas) in Oklahoma: the Mississippi Lime and the Arbuckle. Thanks to technological advances, both formations saw an oil boom from 2010 to 2015. The problem, Pollyea said, was that wastewater pumped from the Mississippi Lime was denser than the water in the seismically active deep rock formation where it was injected and lead to increased stress on the region’s faults.

Over that same five-year time period, the number of earthquakes magnitude 2.5 or higher went from zero to more than 300. The team found that the hypocenters, the deep point of origin for earthquakes, were also getting deeper, about half a kilometer per year and where there was also a higher proportion of high magnitude earthquakes. By sinking progressively deeper, the water exerts more pressure on faults and increases the chance of triggering a high magnitude earthquake, Chapman says.

The region’s small fault lines are found in the so-called crystalline basement, a rock formation thousands of feet below the surface of the Earth.

“Our model shows the high-density wastewater is sinking at the same rate [of hypocenters],” says Pollyea.

From this finding, Pollyea suspects it’s the sinking wastewater leading to the increase in earthquakes.

Even when wastewater injection was significantly scaled back, they found that already-existing wastewater could continue to pose a problem for more than a decade.

Is the Midwest on shaky ground?

Pollyea and Chapman are adamant that they’re not concluding a large, dangerous earthquake is certain for oil-producing regions.

“What the study is saying is there’s the hazard,” says Pollyea.

“This study is a timely and new contribution to understanding fluid injection induced earthquakes,” says Shemin Ge, a University of Colorado Boulder geologist who was not involved in the study.

He noted that understanding how the density of injected wastewater truly impacts a region is crucial to predicting potential danger.