The enormous variety and abundance of plastic packaging—including tough-to-open clamshells—is a big headache for the recycling industry.

Plastic packaging like these clamshells can be recycled. It doesn't mean that they always are.

The enormous variety and abundance of plastic packaging—including tough-to-open clamshells—is a big headache for the recycling industry.

The scissors were on sale for $3. Suspended between two thick layers of tough plastic, they looked permanently imprisoned. Ingenuity, and no small amount of effort, would be needed to free my excellent deal from its clamshell prison. But there was also a risk that blood would be spilled—my blood. Thousands of people seek medical treatment every year with cuts and other injuries from attempting to open clamshells and other similar packages.

Clamshells have not only been voted the worst design ever, they've spawned the term “wrap rage” as exemplified by comedian Larry David’s attempt to open one. Despite all this, products inside clamshells line the shelves of retail stores and supermarkets.

U.S. inventor Thomas Jake Lunsford patented the clamshell in 1978. The hinged design was so named because it resembled a clamshell in form and function, protecting products from external factors like humidity and contamination.

Almost 15 tons of material from plastic containers and packaging were created in 2015 in the U.S. alone.

Clamshells come in all shapes, sizes, and materials, making it difficult for people to know how to properly sort them.

Clamshell packaging was introduced in the 1980s to make items visible to customers while preventing thefts.

The Association of Postconsumer Plastics Recyclers 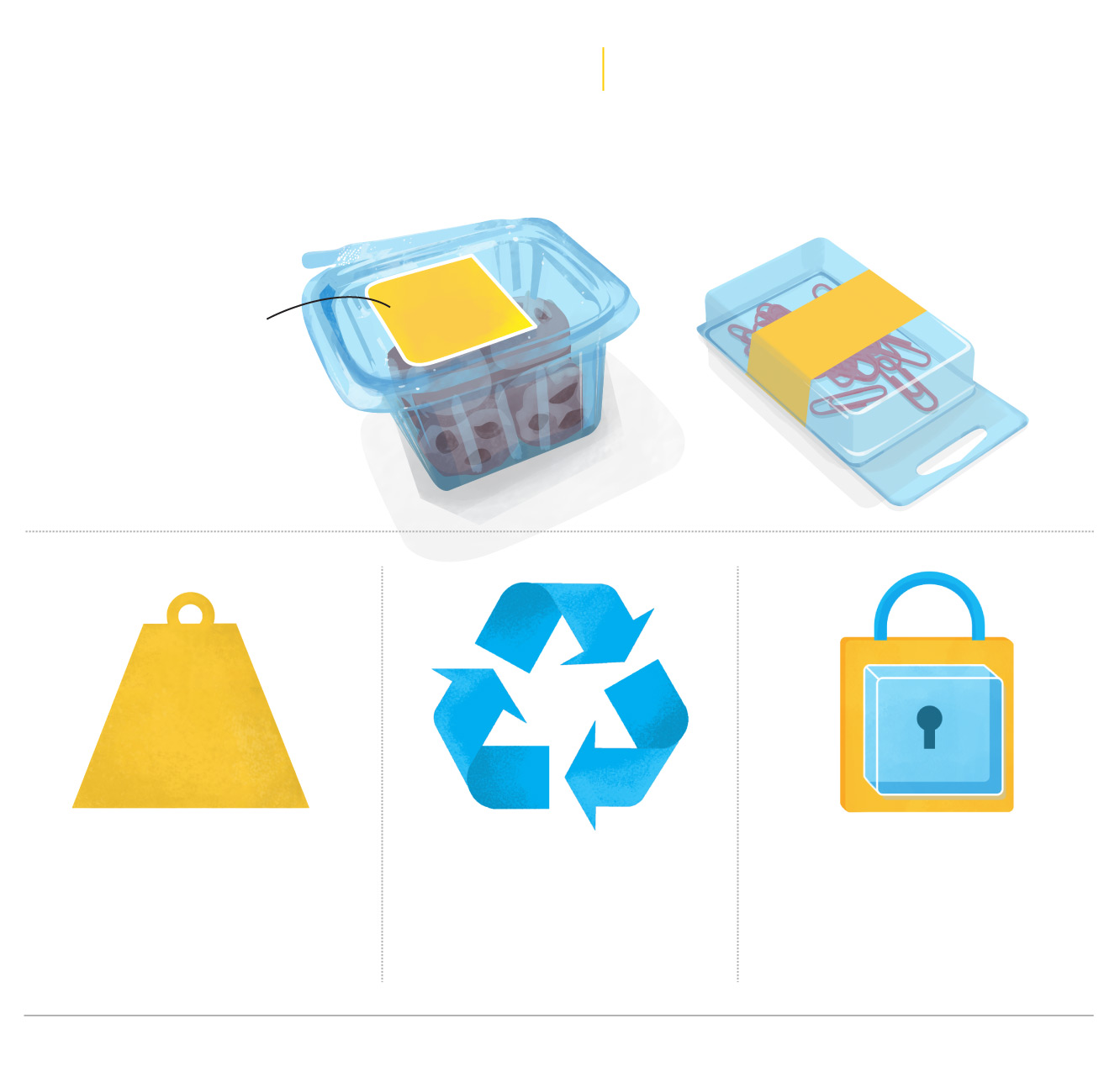 U.S. inventor Thomas Jake Lunsford patented the clamshell in 1978. The hinged design was so named because it resembled a clamshell in form and function, protecting products from external factors like humidity and contamination.

Almost 15 tons of material from plastic containers and packaging were created in 2015 in the U.S. alone.

Clamshells come in all shapes, sizes, and materials, making it difficult for people to know how to properly sort them.

Clamshell packaging was introduced in the 1980s to make items visible to customers while preventing thefts.

Product packaging generates more plastic waste than any other industry. In Europe it accounts for 59 percent of all plastic waste by weight. In the United States that is likely closer to 65 percent, experts say. The global packaging market is a $700-billion-a-year industry and growing at 5.6 percent per year. Plastics account for one-third of this, making packaging the largest single market for U.S. plastics.

Clamshells, like most packaging, are single-use plastics and while technically recyclable, few are recycled in the U.S. That needs to change quickly if product manufacturers and the plastics industry are to meet their commitments to recycle or recover all plastics and greatly increase their use of recycled plastic in packaging.

Thomas Jake Lunsford is credited with inventing the clamshell, although he called it a “Separable Packaging and Display System” when he filed for a patent on September 15, 1976. Clamshells look a bit like their namesake as they are made from two identical plastic "shells" that fit around the product and hinge on one side. When the sides are pressed together, snaps form a seal, some of them harder to unfasten than others.

Lunsford made no mention of using a heat seal on the edges to make clamshells impossible to open without tools. Scissors, even when they aren’t trapped in a clamshell, don’t work well on tough, slippery plastic. And, like boxcutters, they pose some risk of hand injury. Tin snips work better, but there is a tool whose only purpose is to open clamshells.

Clamshell packaging remains popular with retailers because the product is visible on both sides, it can be hung or freestanding, and it’s harder to shoplift since the package is bigger than the product inside. It’s much lighter than cardboard or other alternatives—saving energy during transport—cheaper to make, and more durable. The food industry accounts for more than 60 percent of all clamshell packaging.

“There’s a huge variety of clamshell and blister packaging, “ says Sara Greasley, who runs a popular blog about packaging and works in the industry.

Blister packs are usually a clear bubble of plastic mounted on a piece of cardboard. Batteries are still sold this way. But the terms are often used interchangeably, so it can be confusing, Greasley said. The type of clamshell packaging used is usually driven by the retailers, particularly volume buyers like the club stores (i.e. Costco) who have specific packaging requirements, she said. For example packaging may have to withstand shaking, crushing, and dropping tests to ensure there’s no damage.

Recyclable doesn't mean it will be

The enormous variety and abundance of plastic packaging turns out to be a big headache for the recycling industry. “It’s a big challenge,” acknowledges Steve Alexander, President of The Association of Plastic Recyclers.

“Clamshells are usually made out of PET plastic, so they are highly recyclable,” says Alexander.

There is big demand for recycled PET (Polyethylene terephthalate) content in new clamshells, particularly those used in the food industry. However, clamshells aren’t being recycled because they aren’t being collected, and if collected, most existing material recovery facilities can’t sort them out from the other materials. And if they can sort them, sticky labels or food residues can be a problem to remove, as is the cardboard backing on blister packs, he said.

The public is increasingly buying products that are more sustainable—and come in appropriate packaging—at twice the rate of other products, a 2018 Neilson survey showed.

Starting in August vendors on Amazon will have to meet waste-efficient packaging standards, including no clamshells or other plastic packaging for medium- and large-sized products, or face $1.99 chargeback per package, said Kim Houchens, director of customer packaging at Amazon.

“Previously we paid vendors a dollar for each package that was redesigned for the e-commerce market,” Houchens says in an interview.

Over the past decade Amazon’s sustainable packaging initiatives have reduced Amazon’s packaging waste 16 percent; the overall reduction target is 25 percent, she said. To that end the company has developed a fully recyclable padded-paper envelope mailer to replace the ubiquitous yellow plastic-bubble envelopes.

Reduce, reuse, on a big scale

Multinational giants like PepsiCo, Coca Cola, and Walmart, and 400 others, have set ambitious recycling goals under the New Plastics Economy Global Commitment, started in 2018 by the Ellen MacArthur Foundation. The goal is a circular economy for plastic in which it never becomes waste; packaging is its first target. To that end companies have agreed to increase the amounts of recycled plastic used in packaging to an average of 25 percent by 2025, compared with the current global average of just 2 percent. That too is a big challenge, Alexander said.

“To meet those goals we need 3.5 times more PET from what’s currently collected and sorted,” he says.

Plastic bottles are also made of PET and are the primary source for recyclers. An investment of at least $3 billion in processing plants alone will be needed over the next decade to achieve companies' goals, according to a report by research and analysis firm Wood Mackenzie. That doesn’t include additional investments in collection or improved material recovery facilities.

Only 50 percent of U.S. household have curbside collection, so how do recyclers get their hands on the material, Alexander asks. Less than five percent of plastics in the U.S. is recycled. The rest is landfilled, burnt or exported. In 2017 two billion pounds of plastic waste were sent to China and Hong Kong, the same year China said it will no longer accept it.

So now shiploads of U.S. waste plastic are going to countries like Thailand, India, and Indonesia where most waste is mismanaged. And up to six times more plastic was burned in the U.S. in 2018 than was recycled. Burning plastic produces CO2 and can release toxins.

“We need a sweeping discussion in this country on how to solve this problem,” says Alexander.

Recycling aside, the reusability of the clamshell is what Lunsford, its inventor, claimed was its advantage over existing plastic packaging. But there in the store, I had a thick plastic heat-sealed clamshell in my hand, with a pair of $3 scissors securely trapped inside. They were sturdy scissors, good enough to open all manner of packages. But like Larry David did, I would have to destroy the package to get them out, rendering the clamshell worthless. Were they worth the effort and risk to somehow free them from their plastic prison?

I put them back on the shelf.