See the complicated landscape of plastic bans in the U.S.

A battle over plastic—a material so prolific the UN calls the 90 percent of it that ends up as trash a pollution crisis—is under way in Florida.

Coral Gables, a small city of 51,000 people just south of Miami, wants to ban polystyrene from restaurants and grocery stores. The Florida Retail Federation does not, and an appeals court ruling delivered yesterday says they can keep the plastic product, in part thanks to a 2016 state rule that prevents cities from regulating how polystyrene is used.

The court battle demonstrates how cities and states are increasingly clashing over whether it’s legal to ban plastic.

Bans on Plastic, and Bans on Bans

Jurisdictions across the United States have instituted bans and fees on various types of plastic products, like bags, carryout containers, polystyrene (Styrofoam), and straws. States have also enacted restrictions preventing future plastic bans. Local plastic restrictions are more common in West Coast and Northeast States where preemption laws have not been enacted.

STATE WITH LOCAL BANS OR FEES

California was the first state to ban plastic bags and contains over 250 local jurisdictions with additional plastic restrictions.

In Colorado, an industry group alleges that a 1993 statute preempts local plastics bans.

New York State’s ban on plastic bags at retailers takes effect in 2020, while local jurisdictions are preempted from addressing bags at restaurants.

Maine has a ban on single-use polystyrene containers.

Florida prohibits future legislation that limits the use of polystyrene products, while a lawsuit over the validity of a statute preempting local Florida bag laws is pending. 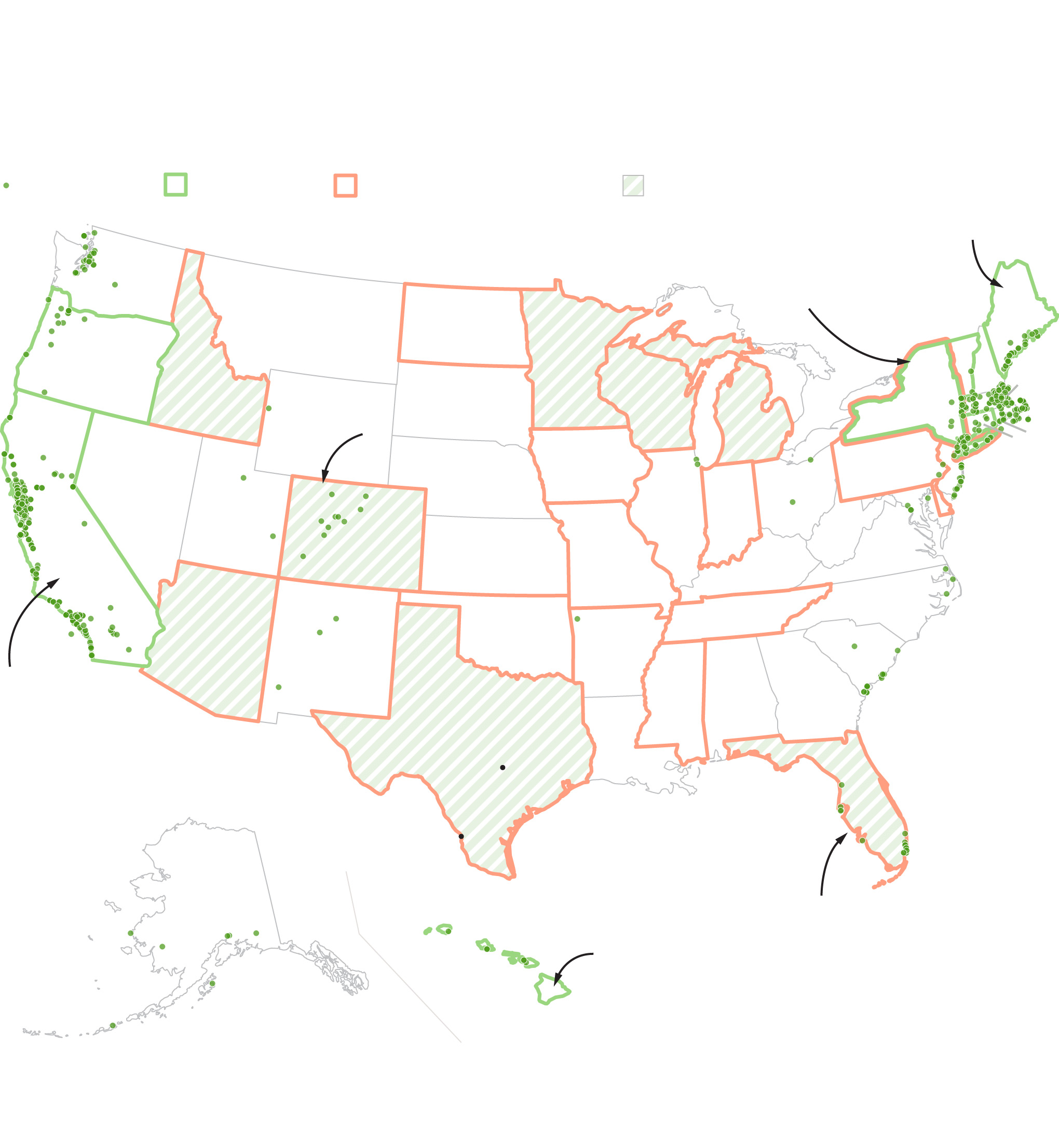 Bans on Plastic, and Bans on Bans

Jurisdictions across the United States have instituted bans and fees on various types of plastics, like bags, carryout containers, polystyrene (Styrofoam), and straws. States have also enacted restrictions preventing future plastic bans. Nation-wide, there is currently a ban on the use of microbeads.

Maine has a ban on single-use polystyrene containers.

New York State’s ban on plastic bags at retailers takes effect in 2020, while local jurisdictions are preempted from addressing bags at restaurants.

In Colorado, an industry group alleges that a 1993 statute preempts local plastics bans.

California was the first state to ban plastic bags.

Florida prohibits future legislation that limits the use of polystyrene products, while a lawsuit over the validity of a statute preempting local Florida bag laws is pending.

California, New York, and hundreds of municipalities in the U.S. ban or fine the use of plastic in some way. Seventeen other states, however, say it’s illegal to ban plastic items, effectively placing a ban on a ban. This kind of legal maneuvering is booming. Four states created preemptions this year alone with two only narrowly failing in South Carolina and Alabama.

Often, efforts to preempt plastic bans are aided by the plastics industry, which wants to ensure its products remain widely used.

“First and foremost, we represent the manufacturers of plastic retail bags,” says Matt Seaholm, executive director of the American Progressive Bag Alliance, a group affiliated with the plastics industry. “We engage at a local level to provide information to local officials on the merits of any type of an ordinance that is being proposed.”

Seaholm said the industry is also looking out for local retailers. He adds plastic bans drive up costs, impose confusing regulations, and put in the hands of the government a decision that should be made by consumers and business owners.

Often partnering with local retail and restaurant associations, the industry is at odds with environmental groups that say single-use plastic must be urgently addressed.

“The plastic industry is putting a lot of their money on preemption, and they’re winning,” says Jennie Romer, an attorney at the Surfrider Foundation, a group that advocates for pro-environment policies.

Eight additional states are considering preemption measures in the coming years that could make it illegal to ban single-use plastics.

When the small border town of Laredo, Texas tried to pass a bill that banned plastic bags in 2008, they wanted to cut down on the costs associated with cleaning the commonly littered item out of waterways and public spaces.

With lobbying help from the American Chemistry Council, the bill was killed, according to an investigation by the Houston Chronicle.

In 2014, the bill was reintroduced and passed by the city. Even the state’s multibillion-dollar cotton and cattle ranching industries supported the ban, saying the stray plastic tumbleweeds clogged machines and cows’ stomachs.

Four years later, the Texas Supreme Court ruled that the ban was illegal, saying it violated a 1993 law that prevented cities or counties from banning a container or package. With it, the ruling brought down 11 other local Texas bag bans.

In Colorado, it was also a 1993 statute that pro-plastic lawyers used to argue against city bans.

For most states, however, no decades-old law was on the books to prevent a plastic ban. Some of the fastest legislative action in states like Pennsylvania, Arizona, and Missouri have rapidly developed after city plastic ordinances were adopted. These state bills all cite the need to create uniform laws throughout their states, a major point made by Seaholm.

“If you think about a retailer with stores in multiple jurisdictions, it becomes cumbersome to adhere to different processes,” he says. “You end up with a patchwork.”

When asked why the plastic industry tries to change state legislation instead of opposing city ordinances, Seaholm says it’s to ensure this uniformity.

State-level preemptions are used to block a number of other city-level ordinances, from creating sanctuary cities to imposing sugar taxes.

She also points to significant involvement from the American Legislative Exchange Council (ALEC) a right-leaning policy group that provides model legislation to states adopting plastic preemptions. Both the American Plastics Council and the Plastics Industry Association have been members of ALEC.

The effectiveness of bans

In Austin, McCombs says city residents have still embraced reusable bags even though plastic has been reintroduced. Since the ordinance was put in place in 2013, they’ve seen a 75 percent reduction in the number of plastic bags in collected litter, and they still plan to be a zero-waste city by 2040.

Plastic bags, they argue, have more than a single use. They can be reused for tasks like lining trash cans or picking up dog waste. Their website cites a study in the journal of Environmental Economics and Management that found California consumers often purchased heavier trash bags to compensate.

A statewide ban that led to a 40-million-pound reduction in plastic waste, was offset by a 12-million-pound increase in trash bags, the study found.

The paper ultimately recommended imposing bag fees, like the five-cent charge you pay to use a plastic bag in Washington, D.C. The fee, the paper concludes, would could cost less than buying small trash bags but still encourage shoppers to bring reusable bags.

The Surfrider Foundation also encourages fees instead of outright bans as the most effective way to incentivize consumers to change their behavior.

To fight back against preemptions, legislators have recently begun to draft anti-preemption laws that would allow cities to reinstate bans and fees on plastic items—the dreaded ban on ban of bans.

Eight states have introduced anti-preemption bills, though none have significantly progressed.