The evolution of the plastic bottle from amazing to scourge of land and sea has played out inside of a generation.

A million plastic beverage bottles were purchased each minute as of 2017. The plastic bottle's journey from convenience to curse has played out quickly—in a single generation.

The evolution of the plastic bottle from amazing to scourge of land and sea has played out inside of a generation.

The moment the modern plastic beverage bottle changed the world’s drinking habits is difficult to pinpoint. The day New York supermodels began carrying tall bottles of Evian water as an accessory on fashion show catwalks in the late 1980s surely signaled the future ahead. Billions of bottles were sold on the promise that bottled water is good for hair and skin, healthier than soft drinks and safer than tap water. And it didn’t take consumers long to buy into the notion that they needed water within reach virtually everywhere they went.

What sets bottles apart from other plastic products born in the post-World War II rise of consumerism is the sheer speed with which the beverage bottle, now ubiquitous around the world, has shifted from convenience to curse. The transition played out in a single generation.

“The plastic bottle transformed the beverage industry and it changed our habits in many ways,” says Peter Gleick, co-founder and president emeritus of the Pacific Institute in Oakland, California, and author of Bottled and Sold: The Story Behind Our Obsession with Bottled Water.

“We’ve become a society that seems to think if we don’t have water at hand, terrible things will happen. It’s kind of silly. It’s not as though anybody died from thirst in the old days,” he says.

By 2016, the year sales of bottled water in the United States officially surpassed soft drinks, the world had awakened to the burgeoning crisis of plastic waste. The backlash against the glut of discarded bottles clogging waterways, polluting the oceans and littering the interior has been swift. Suddenly, carrying plastic bottles of water around is uncool.

What is cool is wearing them: Hip fashion translates into designer clothes made of recycled water bottles. There’s even a growing market of luxury, stainless steel refillables, including a limited-edition bottle covered with thousands of Swarovski crystals that sells for almost $2,000.

Plastic bottles and bottle caps rank as the third and fourth most collected plastic trash items in the Ocean Conservancy’s annual September beach cleanups in more than 100 countries. Activists are zeroing in on the bottle as next in line for banning, after plastic shopping bags. The tiny towns of Concord, Massachusetts and Bundanoon, Australia already have banned bottles, as have numerous public parks, museums, universities, and zoos in Europe and the United States.

The developing world—where 2.2 billion people still do not have access to clean drinking water, according to the United Nations, and bottled water is often the only safe option—is getting out ahead of the problem. In June, Kenya announced a ban on single-use plastics at beaches and in national parks, forests, and conservation areas, effective in June 2020, and the South Delhi Municipal Corporation banned disposable water bottles in all city offices.

It takes at least

for a plastic bottle to completely degrade.

Engineer Nathaniel Wyeth patented polyethylene terephthalate (PET) bottles in 1973. The first plastic bottles able to withstand the pressure of carbonated liquids, they were a much cheaper alternative to glass bottles.

Globally, more than a million plastic bottles are sold every single minute.

Bottled water requires up to 2,000 times the energy used to produce tap water. 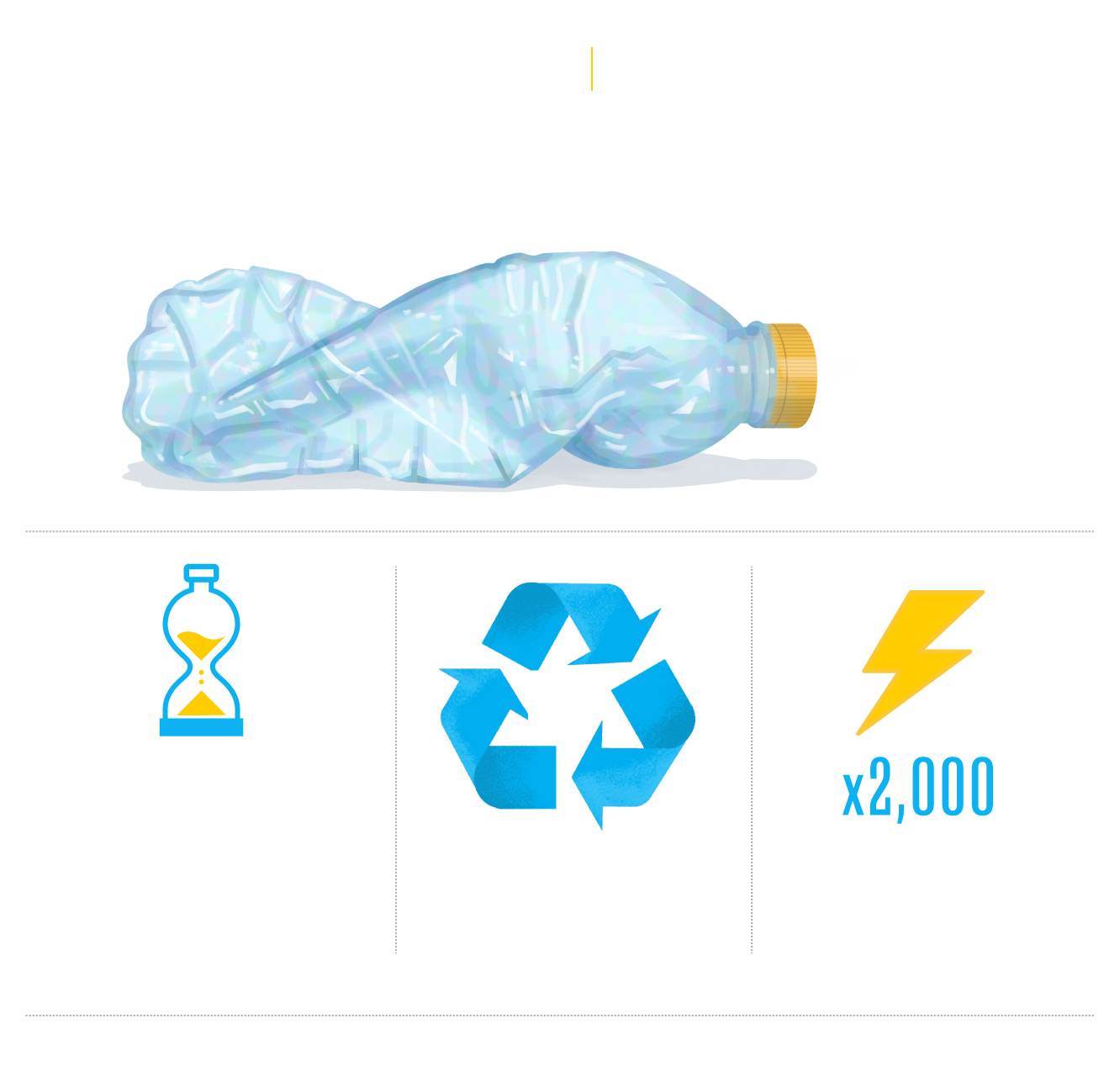 Engineer Nathaniel Wyeth patented polyethylene terephthalate (PET) bottles in 1973. The first plastic bottles able to withstand the pressure of carbonated liquids, they were a much cheaper alternative to glass bottles.

It takes at least

for a plastic bottle to completely degrade.

Globally, more than a million plastic bottles are sold every single minute.

Bottled water requires up to 2,000 times the energy used to produce tap water.

Consumers have been drinking bottled beverages for more than a century, first in glass bottles, then in steel and, later, aluminum cans. Early plastic bottles showed promise as a lightweight alternative, but they leached chemicals and failed to contain carbonated drinks. If the bottle didn’t explode, the carbonation fizzled. It wasn’t until the 1970s when a miracle plastic known as PET came along and changed the game.

Polyethylene terephthalate has been around since 1941. Du Pont chemists developed it while experimenting with polymers to make textiles. In 1973 Nathaniel Wyeth, another Du Pont scientist, patented the first PET bottle. It was lightweight, safe, cheap—and recyclable. In other words, it was the perfect container to set the stage for the bottle binge that followed.

Perrier and Evian crossed the Atlantic at around that time, launching the bottled water craze. PepsiCo finally joined the water business and introduced Aquafina in 1994. Coke followed with Dansani in 1999. Both brands use refiltered tap water. Between 1994 and 2017, water sales in the United States had grown by 284 percent, according to Beverage Marketing Corp. data published by the Wall Street Journal.

Between 1960 and 1970, the average person bought between 200 and 250 packaged drinks ever year, Elizabeth Royte reported in her book Bottlemania, citing data from the Container Recycling Institute. Most of those purchases, she added, involved refillable bottles. As of 2017, on a global scale a million plastic beverage bottles were purchased every minute, according to data from Euromonitor International’s global packaging trends report, published in 2017 by The Guardian. Today, plastic bottles and jars represent about 75 percent of all plastic containers, by weight, in the United States, according to the Plastics Industry Association.

Ramani Narayan, a chemical engineering professor at Michigan State University, cautions that to focus entirely on the numbers and overuse of plastic bottles is to miss the essence of the problem.

“There is an overuse of plastic bottles that needs to be curtailed,” he says. “But the problem is misuse of bottles at the end of their life. The issue is recovery of the product and incentives to recycle, and the commitment on the part of regulators, as well as brand owners, to only use bottles that contain at least 50 percent recycled plastic. Or 60 percent. They are not making that commitment.”

As the public’s focus on the plastic waste crisis narrows, the world is awash with solutions for bottles. Generally, they fall into two categories: efforts to reduce the use of plastic bottles and efforts to find new ways to deal with bottles once they’re thrown away.

Once bottles have become trash, entrepreneurs around the world are turning them into printer ink cartridges, fence posts, roofing tiles, carpets, flooring, and boats, to name only a few items. Even houses have been constructed from bottles. The latest is a three-story modern on the banks of the Meteghan River in Nova Scotia, promoted as able to withstand a Category 5 hurricane. It only took 612,000 bottles.

In laboratories, new versions of bottles claiming to be biodegradable or compostable appear regularly, and plastic industry chemists are experimenting with “chemical recycling” that returns the polymers to their constituent monomers, enabling them to be remade multiple times into new plastic bottles.

Many of the solutions are not scalable to a level that would make a noticeable difference, and most of them—including biodegradables—still require that the most elemental and least functional part of the bottle’s lifespan be performed: Someone needs to pick them all up.

Beverage companies have pledged to use more recycled bottles in manufacturing, a goal that aims to reduce the production of new resin and boosts recycling numbers by adding value to bottle recovery.

Coca-Cola pledged to recycle a used bottle or can for every one the company sells by 2030 and increase recycled material in plastic bottles to 50 percent by 2030.

Mark Murray, executive director of Californians Against Waste, says recovery of plastic waste won’t improve much until it is given greater value, achieved through additional cost of the product.

Ben Jordan, Coke’s senior director of environmental policy, said Coke was reevaluating bottle deposit programs around the world, as well as five major types of recycling systems globally to determine at the local level how to maximize recovery of plastic waste. He noted that Coke’s Mexico City operations recycle virtually 100 percent of PET.

“We all agree on the issue,” he says. “Are there ways that don’t require packaging at all? Are there places where you can bring your own packaging? For all the packages out there, whether a PET bottle or aluminum can, how can we make it more sustainable than it was yesterday?”

Bart Elmore, a professor at Ohio State University and author of Citizen Coke: The Making of Coca-Cola Capitalism, says beverage companies would be wise to take a lesson from their own history. Put a price on a bottle and you’ll get it back.