In New Delhi, burning season makes the air even more dangerous. Can anything be done?

A smoggy morning near Pragati Maidan in New Delhi, India, shrouds vertical gardens on the Delhi Metro pillars. The foliage is supposed to, in part, mitigate pollution, which gets worse in the winter season as farmers burn their fields.

It’s that time of year again. The time when, in the Indian capital of New Delhi, we shutter doors and windows to the grey-orange gloom and switch on our air purifiers, resigned to the deathly annual smog hanging over us, just like it has for years.

Cars, coal-fired power plants, and cookstoves keep New Delhi reliably near the top of the list of the world’s most polluted cities. But the haze is especially bad each autumn, when a cloud of smoke blows in from the northwestern states of Punjab and Haryana. Beginning in late September, rice farmers there burn their fields to clear them for the next crop, wheat.

months of bad air in Delhi

Delhi is already among the worst polluted cities in the world—ranking 5th in 2019, according to one study—but air pollution in the capital region spikes each year as farmers burn millions of tons of crop waste. 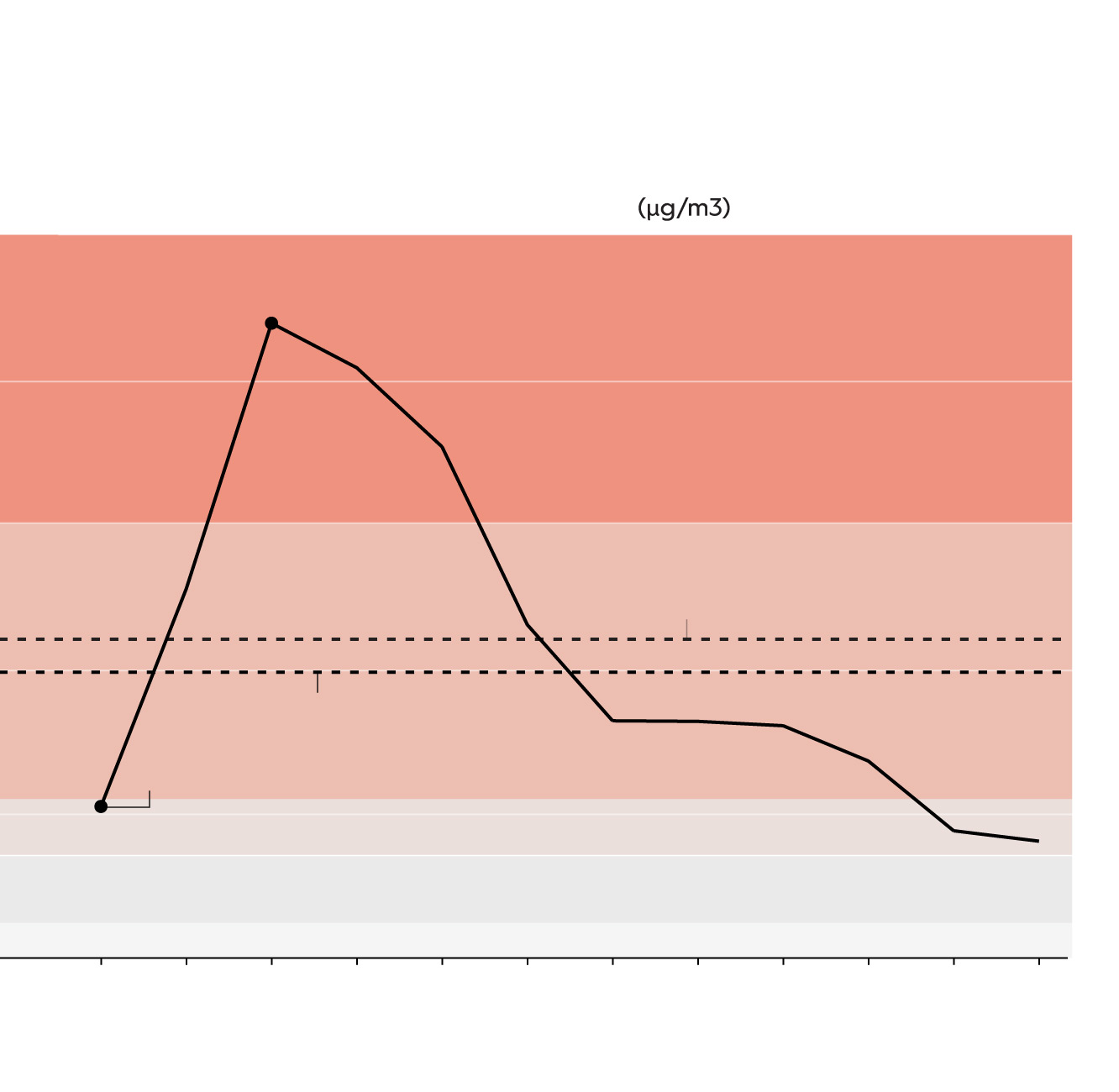 Delhi is already among the worst polluted cities in the world—ranking 5th in 2019, according to one study—but air pollution in the capital region spikes each year as farmers burn millions of tons of crop waste.

Ghaziabad, India, was the world’s most polluted city in 2019.

Delhi was the fifth most polluted city.

And we can expect another pollution spike this weekend as Indians everywhere take to the streets, in spite of the coronavirus pandemic, to light fireworks and lanterns in celebration of Diwali, the country’s most important holiday.

This year, we also have the nagging worry of how vulnerable the toxic smog makes us to the coronavirus.

“I dread these months when I struggle with shortness of breath and severe allergies,” says Aditya Dubey, a 17-year-old student and ardent environmentalist. “This year, with the coronavirus pandemic that also affects the lungs, things look bleaker than ever.”

Seasonal crop burning in areas northwest of India’s capital—the country’s most populous metropolitan region—compounds the poor air quality for some 30 million residents for months each year. 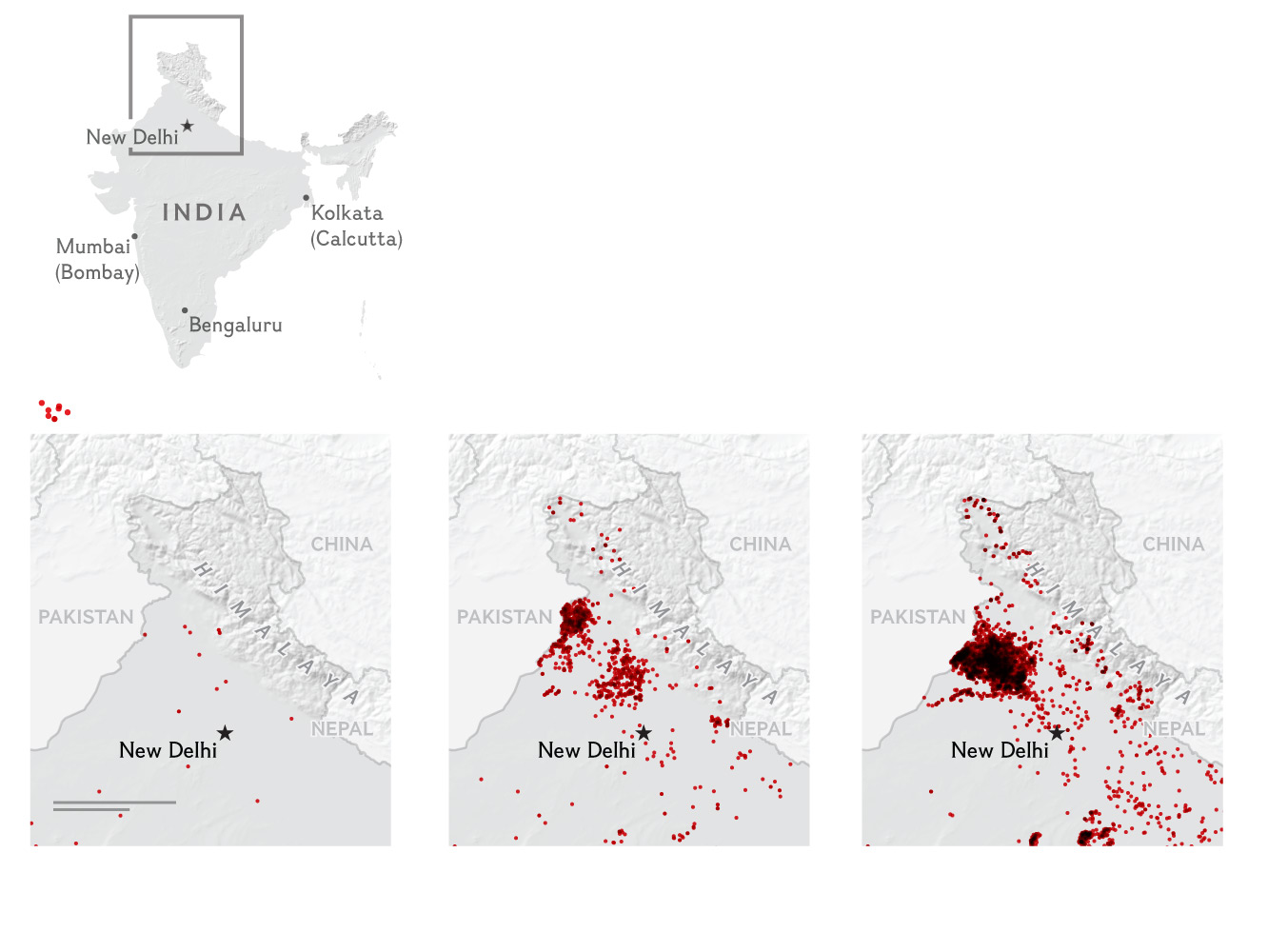 Seasonal crop burning in areas northwest of India’s capital—the country’s most populous metropolitan region—compounds the poor air quality for some 30 million residents for months each year.

He has reason to be anxious. As the air quality index worsened, the Indian capital also recorded its highest daily COVID-19 caseload of 8,500 on Nov 11. A senior Delhi official reportedly blamed the spiraling COVID-19 cases on air pollution. The two are certainly a deadly mix, increasing COVID-19 deaths by an estimated 15 percent worldwide, according to one recent study.

Globally, air pollution killed 6.67 million people in 2019. More than 1.67 million deaths were in India, where over 80 percent of cities struggle with unhealthy air quality. Of the most polluted cities globally in 2019, 21 out of 30 were Indian.

Last year, after pollution levels had breached all set standards, the Delhi government declared a public health emergency, closing schools, halting construction work, and grounding flights. But putting a stop to crop stubble burning, which contributes as much as 40 percent of the city’s air pollution in winter months, isn’t as straightforward.

It’s not legal to burn fields, and farmers are fined handsomely for doing it. But no amount of fines, court orders or government crackdowns have been able to stop this practice, simply because the farmers have no workable solution to their yearly dilemma: how to negotiate the short duration between the harvesting of rice and sowing of wheat in the same fields.

For over three decades, farmers in Punjab and Haryana have been incentivized to follow the ecologically unsustainable wheat-rice crop rotation system—a key part of the Green Revolution that, beginning in the 1970s, led to a dramatic improvement in India’s food security. The two states produce a majority of the country’s rice even though their climates are naturally too dry for paddy cultivation, which has led to increased dependence on irrigation.

As a result, groundwater levels in those states have plummeted, prompting the government to mandate that farmers sow rice only during the monsoon season, in June and July. That means the rice is ready to be harvested in October and early November. But the wheat crop needs to be planted before mid-November as any delay in that will affect the quality of the wheat harvest.

The upshot is that farmers have only between 10 and 20 days to clear their fields of the foot-long rice stalks that combine harvesters—another modern innovation—leave behind. The quickest, cheapest, and easiest way to do that is to burn the fields—thus polluting the air far downwind, including in the capital city.

As the coronavirus pandemic tore across New Delhi beginning in March, Dubey, a passionate environmental crusader, was concerned that winter’s smog, and its effects on the lungs, could mean a double public health catastrophe for the city. In August he petitioned India’s Supreme Court to provide small and marginal farmers with free stubble- removing machines so they didn’t have to burn their fields.

He also wrote to the states’ chief ministers, reminding them that no amount of police action or fines “will be able to stop the farmers from setting fires to the stubble,” because it is linked to their livelihoods.

The Indian Supreme Court hears petitions from concerned citizens like Dubey almost every year. Last year, it called the stubble fires and resulting pollution a “grave violation of the right to life” and held the farmers responsible for putting the “life of [a] sizeable population in jeopardy.”

Last week, the government dissolved its 22-year-old environmental protection body and appointed a commission with sweeping powers to crack down on air pollution, including imposing bigger fines on stubble burning. But paying the fines is reportedly cheaper for the farmers than paying to dispose of the harvest waste.

The true face of pollution

Air pollution has already led to the loss of around 24,000 lives in Delhi in the first half of 2020, even including three months of the coronavirus lockdown, during which air quality in the Indian capital improved dramatically. By comparison, COVID-19 has so far killed over 7,300 people in Delhi.

The contribution of the burning of the fields to New Delhi’s annual pollution load, according to Mukherjee, is not insignificant, but also not enough to vilify the farmers.

“A lot of smoke gets blown over stubble burning, which is a seasonal cause, and yes, there is a need to crack down on it just as it’s important to crack down on other anthropogenic causes,” says Mukherjee.

Over the last few decades policy makers have only focused on cleaning up Delhi air, says Sagnik Dey, a professor at the Center for Atmospheric Sciences in Delhi’s Indian Institute of Technology. But it’s impossible to do that without cleaning the surrounding regions “because Delhi is only a point in the massively polluted Indo Gangetic Plain.”

Late last year, an analysis of the Air Quality Life Index noted a 72 percent increase in pollution from 1998 to 2016 in that region, which is home to about 40 percent of India’s population. It also noted that dirty air was cutting residents’ lives short by an average of seven years.

New Delhi’s toxic air grabbed global headlines in early 2019 as the government launched a National Clean Air Program requiring 122 Indian cities to come up with plans to cut pollution 20 to 30 percent by 2024. To date, a hundred cities have developed roadmaps to that goal. The Ahmedabad air response plan, for example, includes the deployment of eight new air quality monitoring sites across the city that will produce a daily air quality index. An early warning system for extreme pollution is also planned, as is training for medical professionals to respond to air-pollution emergencies.

During the lockdown period, for the first time in years residents in the national capital region breathed clean air and saw clear, blue skies. New Delhi’s Air Quality Index measured the cleanest air since quality records were started in 2015—and a dramatic decrease in particulate matter concentration in the air in the first week of the lockdown.

Many in Punjab, more than 100 miles from the Himalayas, reported spotting the mountain range as the haze cleared, a rare occurrence. The lockdown period showed us what needs to be done, Mukherjee says. The challenge is to find a coordinated national plan across regions and beyond cities.

"[During the lockdown] everybody, including the average guy on the ground, experienced clean air and blue skies,” Mukherjee says. "We know it can be done."