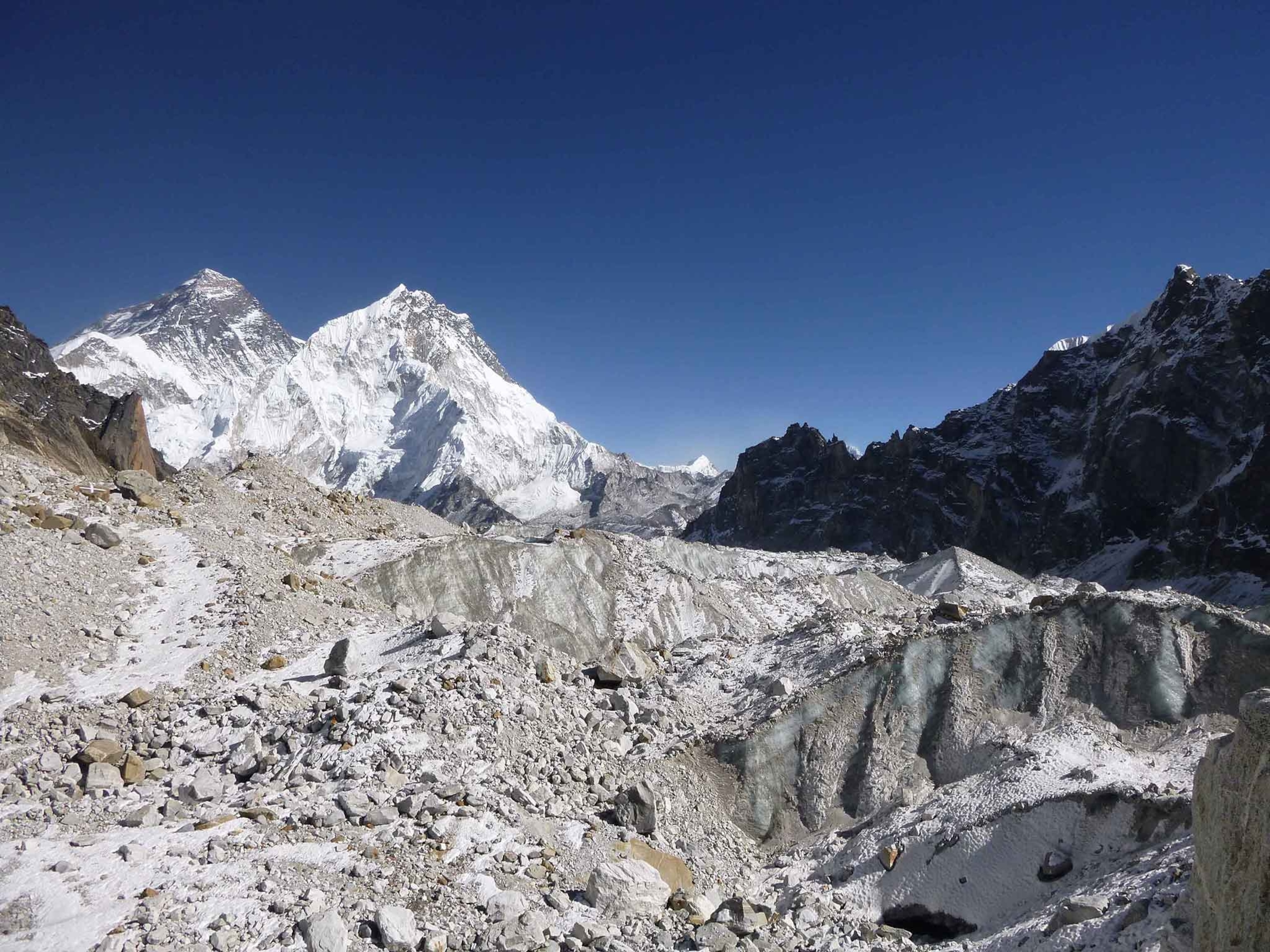 Hotter temperatures have melted as much as a quarter of Himalayan glacial ice in the past 40 years, reveals a study of declassified spy satellite photos from the 1970s.

Changri Nup Glacier, one of the hundreds studied by the researchers. Much of it is covered by rocky debris. The peak of Mt. Everest is in the background at left.
Photograph courtesy Josh Maurer/LDEO

The Himalayan Mountains are home to the highest peak in Mount Everest at 29,029 feet, but also to the third largest deposit of ice and snow in the world, after Antarctica and the Arctic. Now the first complete study of this remote region reveals that its glaciers lost billions of tons of ice—equivalent to more than a vertical foot and half of ice each year—from 2000 to 2016.

That’s double the amount of melting that took place from 1975 to 2000, revealing that the ice loss is accelerating with rising temperatures. It’s also threatening water supplies for hundreds of millions of people downstream across much of Asia.

This is the first comprehensive look at what’s happened to glaciers in the Himalaya over a 40-year time span, said lead author Joshua Maurer at Columbia University's Lamont-Doherty Earth Observatory. The study was published today in Science Advances.

Glaciers appear on almost every continent. However, they are rapidly melting due to the warming climate. Find out how glaciers form and other interesting facts about glaciers.

“Our study reveals a robust signal of glacier ice loss linked to rising temperatures from climate change,” Maurer says. As much as quarter of the region’s ice has been lost over the last 40 years, he estimated.

Temperatures in the region have risen one degree Celsius (1.8 degrees Fahrenheit) higher than those from 1975 to 2000, according to temperature data collected from ground stations. Researchers calculated the amount of melting likely to result from warmer temperatures to confirm that one degree was indeed enough to produce such a massive loss of glacier ice.

“A one degree C increase is a huge change,” says co-author Joerg Schaefer, a professor at Columbia University’s Lamont-Doherty Earth Observatory. “In the middle of the last ice age the mean annual temperature was only 3 degrees C cooler,” he says.

The signal showing Himalayan ice loss linked to rising temperatures would not be so clear if it weren’t for the U.S. spy satellites—KH-9 Hexagon military satellites from 1973 to 1980 to be precise—that photographed the region. Declassified images from those satellites were turned into 3-D models to show what the glaciers’ elevations and sizes were in the 1970s, Maurer said. Those were then compared to more recent sophisticated NASA satellite imagery that shows changing elevations of the ice over time. That enabled researchers to study the changes to 650 of the largest glaciers, representing 55 percent of the glacial ice in the region over the past 40 years.

The glaciers in the Himalaya are much less studied than Greenland’s since it is amongst the most dangerous regions—physically as well as politically difficult—to do research in, said Maurer. The Himalaya span 1,500 miles, passing through the nations of India, Pakistan, Afghanistan, China, Bhutan, and Nepal.

The ice and snow in the region are the source for Asia’s mighty rivers including the Indus, the Yangtze, and the Ganga-Brahmaputra. The study did not include the huge adjoining ranges of high-mountain Asia such as the Pamir, Hindu Kush, or Tian Shan, but other studies suggest that similar melting is underway there as well.

This melting means runoff is 1.6 times greater than if the glaciers were stable, resulting in seasonal flooding and the creation of many glacial lakes that create a risk of catastrophic outburst floods. In May 2012, one such flood killed over 60 people in villages near Pokhara, Nepal; it also destroyed houses and infrastructure.

The new study is both hugely significant and worrying, given the vast number of people who rely on the glacier meltwater for hydropower and irrigation, said Duncan Quincey, a glaciologist at the University of Leeds in the United Kingdom who works in the Himalaya.

Quincey’s research project, called EverDrill, involves drilling deep into Nepal’s Khumbu Glacier and monitoring ice temperatures. The data from EverDrill show that the glaciers are warming internally, and that large volumes of ice may already be close to the melting point, Quincey said.

Without substantial cuts in fossil fuels emissions by 2100 the Himalaya could lose 66 percent of their ice, according to a major report compiled recently by more than 200 researchers over a five-year period.

“Global warming is on track to transform the frigid, glacier-covered mountain peaks...[into] bare rocks in a little less than a century,” said Philippus Wester of the International Center for Integrated Mountain Development in a statement.

Running out of water

Some 800 million people depend in part on seasonal runoff from Himalayan glaciers for irrigation, hydropower, and drinking water. The accelerated melting appears so far to be swelling runoff during warm seasons, but scientists project that will taper off within decades as the glaciers lose mass.

“Asia is facing an epic disaster between extreme heat waves and reduced water flows from the Himalaya,” says Columbia University’s Schaefer. “We need a societal awakening and to spend a significant part of our economy to avoid the catastrophic risks we’re facing.”