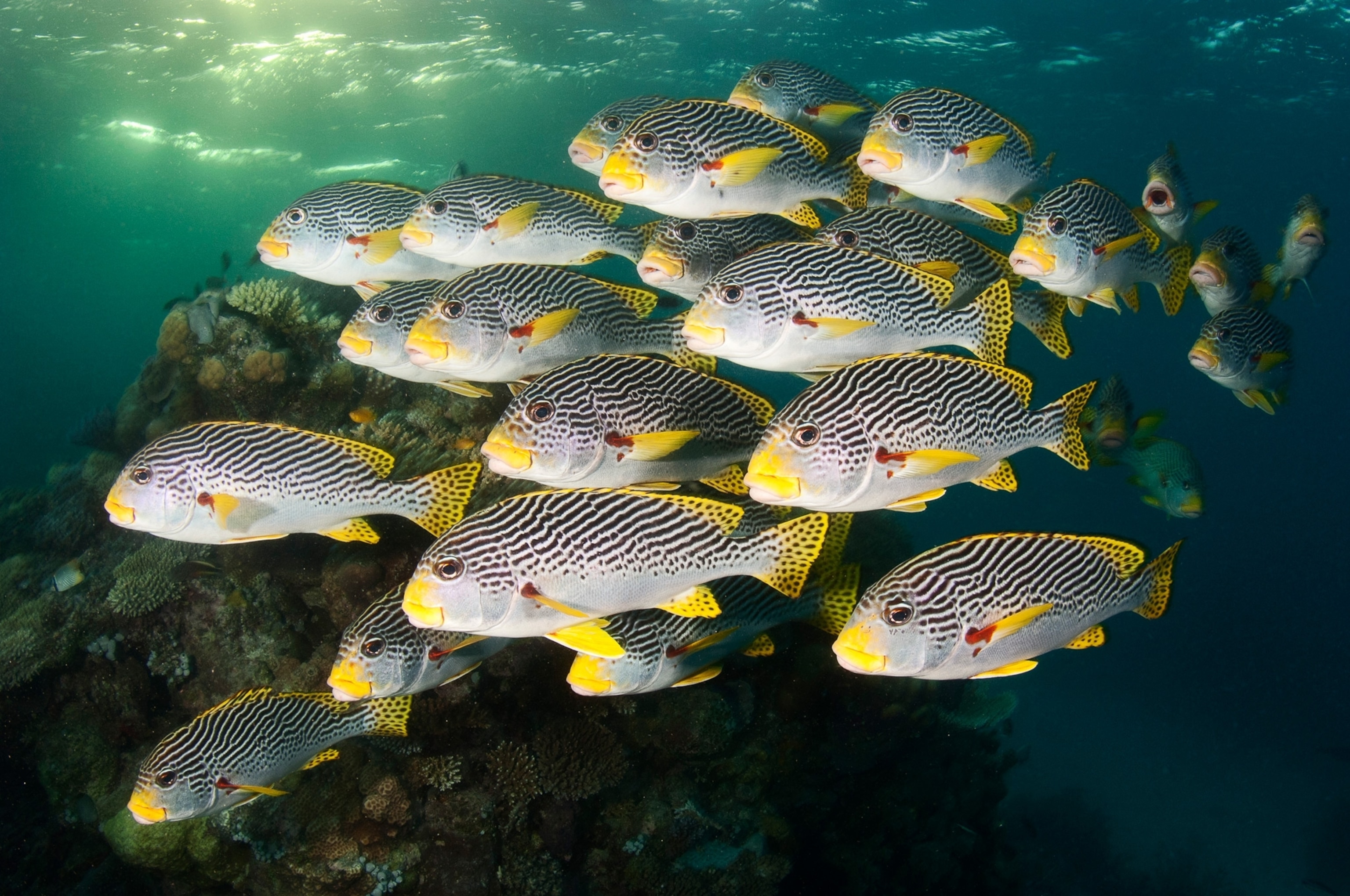 The world’s most far-reaching pact to protect and sustain ocean health offers hope that our seas’ dire problems might be solved.

Schools of sweetlips swim the Great Barrier Reef. Australia is one of the nations committing to protect 100 percent of its ocean waters from overfishing, plastic pollution, and agricultural runoff.

When the heads of state of 14 nations sat down together in late 2018 to discuss the grim condition of the world’s oceans, there was no certainty that anything consequential would result. The leaders planned 14 gatherings, but met only twice before the pandemic upended their talks.

So when the group announced this week the world’s most far-reaching pact to protect and sustain ocean health, it signaled a bit more than a noteworthy achievement in a complicated time. The agreement, negotiated via the nuance-free tool of video conferencing, also offered hope of a renewed era of global accord on climate, where issues grounded in science might finally trump political posturing.

Overall, the 14 leaders agreed to sustainably manage 100 percent of the oceans under their national jurisdictions by 2025—an area of ocean roughly the size of Africa. Additionally, they vowed to set aside 30 percent of the seas as marine protected areas by 2030, in keeping with the United Nations’ campaign known as “30 by 30.” (Read more about 30 by 30 here.)

Both of those large commitments, the leaders say, will help end overfishing and illegal fishing, rebuild declining fish stocks, halt the flow of plastic waste into the seas, and clean up “dead zones” created by runoff from farm waste.

“What I find really interesting is that 14 nations spent the last two years talking to each other in an experiment you’d like to see more of in the future,” says Nancy Knowlton, a marine scientist emeritus at the Smithsonian Institution, who was not involved in the project. “They are working together as a team. Starting with countries on the same page provides a mechanism for actually achieving success.”

Not the usual gang of suspects

The group of 14 looks nothing like the usual assemblage of international leaders recruited for global initiatives. France, with its vast array of overseas territories that gives it one of the planet’s largest ocean footprints, was not invited. Nor were the powerhouse players of Russia, China, or the United States.

“Negotiation with that category of country isn’t all that easy,” says Vidar Helgesen, Norway’s former Minister of Climate and Environment and the driving force behind the project. “We decided to get a group where high politics wouldn’t get in the way and we could be focused on the task.”

The idea, Helgesen says, was to gather a coalition of the willing—a like-minded group of countries with the ocean deeply embedded in their culture and history—to conduct discussions that would be underpinned by science.

Consequently, the High Level Panel for a Sustainable Ocean Economy includes nations large and small, rich and poor, spread across all ocean basins. All are economically dependent, to varying degrees, on the seas. The 14 members are Australia, Canada, Chile, Ghana, Indonesia, Japan, Kenya, Mexico, Namibia, Norway, Portugal, and the island nations of Fiji, Jamaica, and Palau.

The 14 leaders are now inviting other nations to join the effort.

Coral spawns on the Great Barrier Reef. A coalition of a like-minded countries with the ocean deeply embedded in their culture and history came to the agreement to protect their oceans, discussions underpinned by science.

The Great Barrier Reef from above. The 14 nations' leaders want to make the oceans part of the solution, not just the main problem, meaning not just fish, but the oceans' other inhabitants, including seaweeds and bivalves.

The effort was backed up by a team of 253 scientists that conducted new ocean research and published 16 authoritative papers on topics ranging from an assessment of stemming the flow of plastic waste to combating climate change. At least nine of them are being published in Nature.

“The scientific process was very rigorous,” says Boris Worm, a marine scientist at Dalhousie University in Nova Scotia who served as a science advisor to the Canada delegation. “When you get together with people with diverging interests and you look at the available data together, there is less to haggle about. The data is the data. You can act together.”

The members of the High Level Panel also were willing to turn conventional thinking on its ear. Instead of considering the ocean as merely a victim of climate change—which it undoubtedly is, as it’s both warming and acidifying—the leaders say the seas should be harnessed to become part of the global solution. The key to that is to take an all-in approach—sustainably manage 100 percent of the ocean, not just the protected areas. Properly managed, the panel says, the ocean economy, including fishing, can expand.

Additionally, actions such as restoration of mangroves, kelp beds, and seagrasses that absorb carbon could help offset global emissions by as much as a fifth, and help hold global warming to 2.7 degrees Fahrenheit (1.5 degree Celsius), the leaders say.

“We have acted as if we had to choose between protecting the ocean or using it,” says Jane Lubchenco, who headed the National Oceanic and Atmospheric Administration in the Obama Administration and co-chaired the High Level Panel’s experts committee. “That’s a false choice. We are discovering smarter ways to use the ocean without using it up. The secret lies in protecting the health of ocean ecosystems…”

She says the solutions offered by the panel could generate 40 times more renewable energy, through development of offshore wind energy production and wave and tidal power, and lift millions of people out of poverty. The panel’s economists forecast that every $1 invested in a sustainable ocean would return $5 in economic, social, and environmental benefits.

The solutions involve a range of 74 actions, some already in progress. New technology, for example, enables Ghana to track foreign fishing vessels lurking off its coast and crack down on illegal fishing. While the panel’s call for investment in sewage and waste management infrastructure to curb the flow of plastic waste into the seas is prohibitively expensive and unlikely to happen on a large scale in the coming decades, many developing nations have banned various single-use plastic products and others are deploying catchment systems on major rivers in Thailand, Vietnam, and Indonesia to capture plastic waste before it is disgorged into the seas.

Ambitious goals are hard to achieve

If the approach sounds to some like just another blue ribbon exercise in futility, the leaders say the time for small steps has passed. The ocean, which covers 70 percent of the globe and produces more than half the oxygen on Earth, has reached such a dire point of decline that more drastic action is needed. The world’s decades-long inability to rebuild dwindling fish stocks to feed a growing world population offers a timeline that strikingly illustrates the point.

Fishing reached peak catch in the mid-1990s, marking the beginning of a long decline. Canadian Premier Justin Trudeau was wrapping up his undergraduate days at McGill University in Montreal. Now, more than half his life later, 82 percent of the world’s fish stocks are considered overfished and new research shows that just 27 percent of Canada’s are considered healthy. (Last year, Canada strengthened its fisheries law, making the rebuilding of fish stocks mandatory.)

The UN’s Intergovernmental Panel on Climate Change warned in a special 2019 report on fragile ocean health that without action, fish could decrease by 25 percent by 2100. Only Norway and the United States have managed to rebuild fish stocks.

“No way is applying more effort to fishing going to get us more fish,” says Enric Sala, marine scientist and National Geographic Explorer-in-Residence.

Likewise, setting aside small slivers of ocean for protection—just seven percent of the seas are designated marine protected areas—will not restore ocean health. Even 30 percent is not considered enough.

“The goal is not to just protect a small fraction of the ocean and trash the rest, so to speak, but to be ambitious in saying 100 percent of our ocean needs to be managed so it’s not deteriorating any further,” Worm says. “And, a lot needs to be rebuilt and recovered and restored. That’s the real question here.”

What does sustainable really mean?

At the same time, the phrase “sustainably managed” is such a broad, elusive term that it opens the door wide for skepticism. Daniel Pauly, a world-renowned fisheries expert at the University of British Columbia, who was not associated with the project, praised the effort. But he remains dubious of the notion that the term “sustainably managed” has any meaningful impact.

“Most of the public doesn’t know that sustainable doesn’t mean abundant,” he says. “You can sustain any level, including low levels. You can sustain a stock that is overfished.”

On the other hand, lest skeptics dismiss the idea that just 14 of the world’s 192 coastal nations could make an impact, consider that Japan, a powerful influence in the Asian Pacific, signed on to the agreement to set aside 30 percent of the oceans in marine protected areas. The fact that Japan, which has long signaled reluctance to create protected areas, has changed course is “a big deal,”Sala says.

Now, when the UN meets next year in China to continue work on a global marine protections treaty that still eludes adoption, having Japan on board in support of marine protected areas may ease the way for other nations, including China, to reconsider. So far, China has committed to protecting 30 percent of its land, but has remained silent on ocean protections. China’s support would all but assure the 30 percent goal is met.