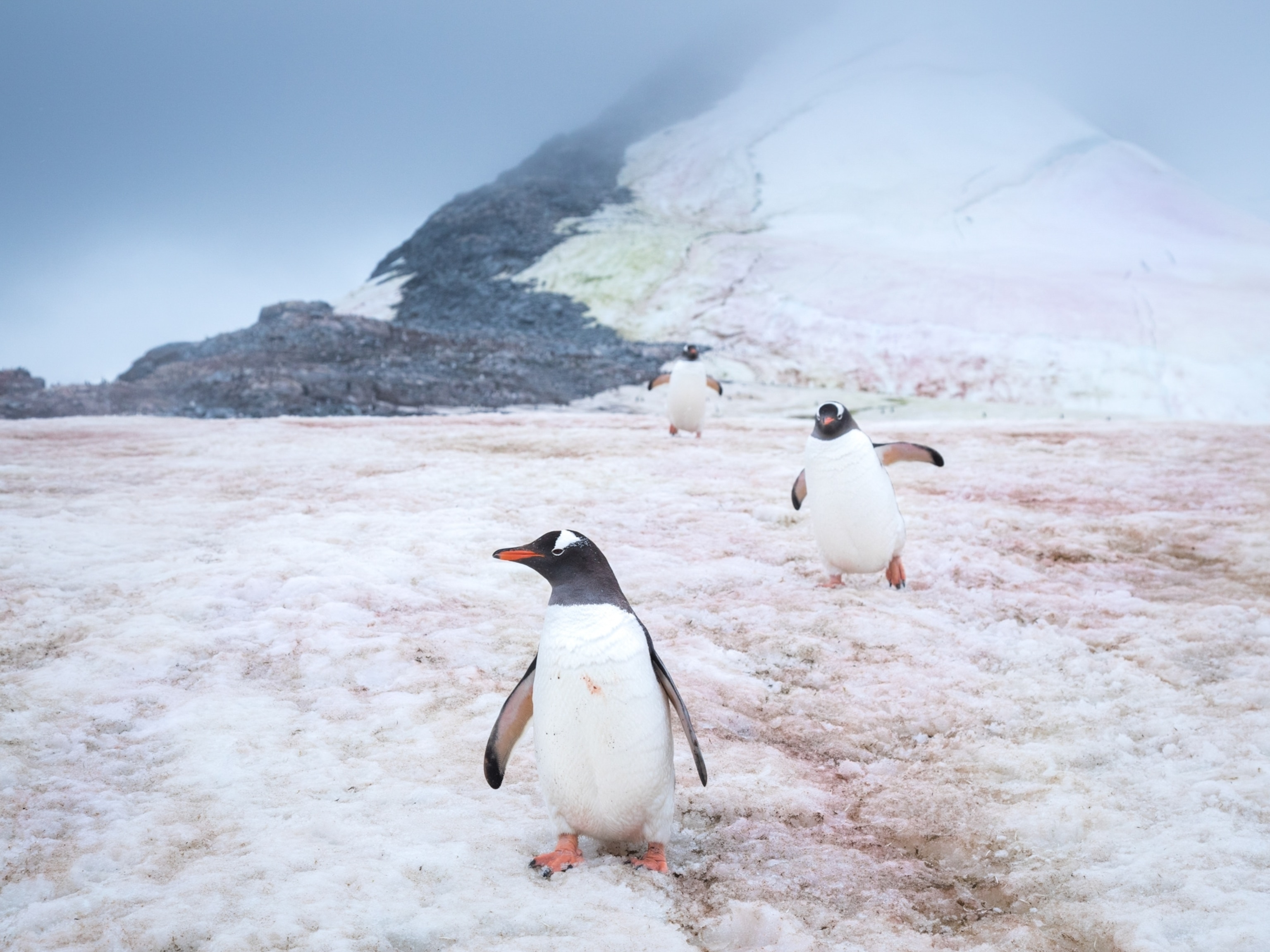 Thriving communities of red algae are doing something nefarious to the world's ice sheets: melting them more quickly.

Gentoo penguins make their way to and from their nests at Port Charcot, Antarctica.
Photograph by Acacia Johnson

A surprisingly happy and healthy ecosystem of algae is not only turning parts of the Greenland ice sheet pinkish-red, it’s contributing more than a little to the melting of one of the biggest frozen bodies of water in the world.

The discolored snow isn’t just an Arctic phenomenon. “It’s actually a global occurrence,” says Alexandre Anesio, a biogeochemist from the University of Bristol.

Gentoo penguins make their way to and from their nests at Port Charcot, Antarctica.

“In order for them to form visible blooms and increase the melting of the snow and ice, they just need the right conditions, which at a minimum involve basic nutrients and melting,” says Anesio. “As the climate gets warmer, the availability of liquid water from snow and ice becomes higher, favoring the growth of snow and ice algae.”

“I think that this is increasingly becoming a problem in Arctic, Alpine, and Himalayan glaciers," Anesio says. Blooms of red snow and brown ice are turning up in Antarctica, too.

And experts are not accounting for the effect in their projections of global sea level rise, despite increasing evidence of what darkening snow is doing to the world's glaciers.

Martyn Tranter is a polar biogeochemist at the University of Bristol in the U.K. and leader of "Black and Bloom," a multi-year project that aims to understand how and why the Greenland ice sheet is melting. “Warming temperatures alone cannot explain the increased melt. So it’s become crucial to understand all the drivers in the ice melting,” he says.

One of those drivers, he believes, is the darkening caused by the algal blooms that quilt the snow-strewn Greenland ice every summer.

“These ice algae are photosynthetic organisms that produce biological sunscreen molecules to protect them from the sun, which in the Arctic in summer stays above the horizon up to 24 hours a day,” explains Tranter, which effectively darkens the ice surface.

The darker surface lowers its “albedo,” or its ability to reflect the sunlight back into space, and that results in more light absorbed and more melting.

As algae spreads over larger areas of the ice sheet, the effect will be compounded, leading to even more melting. A recent study found that algal blooms can contribute as much as 13 percent more ice melt over a season.

“It’s a vicious circle, as often happens with climate change,” says Joseph Cook, a glacier researcher from University of Sheffield in the U.K. and a member of the Black and Bloom team. “More heat means more meltwater and yet a larger area where algae can grow, causing more ice to get darker and more of it to melt.”

The Greenland ice sheet is the biggest piece of ice in the Northern Hemisphere. Each year, it loses 270 billion tons of ice as the planet heats up, adding a fraction of an inch to global sea levels. The amount of melting is speeding up year by year, and if the entire ice sheet melted, it would add 20 feet to sea levels.

Scientists are worried that if it melts more quickly its effects will be felt in coastal areas from New York to Shanghai to Miami, as well as in low-lying areas like Bangladesh and Indonesia.

So far, the blooms have not been taken into account as a contributing factor to Arctic ice melting at an unprecedented rate. The possibility, for instance, was not included in the estimates for sea level rise published by the UN’s Intergovernmental Panel on Climate Change in its latest report in 2013.

Tranter wants that to change. “Our mission is to put firm numbers on it—how much darkening? Over how much area? Leading to how much melt? These are the questions that will enable us to estimate how much melt might occur because of that and so improve our sea level rise forecasts,” he says.

The Story of ‘Black and Bloom’

One summer a few years ago Tranter was working on the southwestern margins of the Greenland ice sheet when he noticed a mauve shade on the melting ice surface around him.

“At first, I thought it was because I was wearing a pair of pink-colored cycling glasses instead of my customary glacier goggles. But the more I looked, the more patterning I could see in the ice surface,” Tranter says.

Gradually, he realized that there were microbes growing in the ice. But when he mentioned it to others on the research team, they teased him, since his observation ran counter to the general view that Arctic ice and snow is sterile and lifeless.

Undeterred, Tranter asked Marion Yallop, an algae specialist and colleague who was coming to work at the same site, to take a look at the ice under the microscope. What she found confirmed Tranter’s suspicion: Just beneath the ice surface lived red algae that was turning the ice pinkish.

Her observations served as a stepping stone for launching the Black and Bloom project, a $4 million, five-year, cross-disciplinary undertaking to study the role that microorganisms like pigmented bacteria and algae living in meltwater play in darkening the surface of the Greenland ice sheet, and hastening its melt.

The project is now in its third year. To date, the project has run three of a planned four field expeditions to the so-called dark zone, a vast area on the western edge of the ice sheet where albedo reduction has been the greatest. Data from the expeditions has been presented and published, and there are more studies to come, Tranter says.

Says Anesio, who is also part of the Black and Bloom team: “Overall, I do think that our understanding of the controls of ice algae growth on Greenland will help us to predict their growth on other glaciated regions of the Earth.”