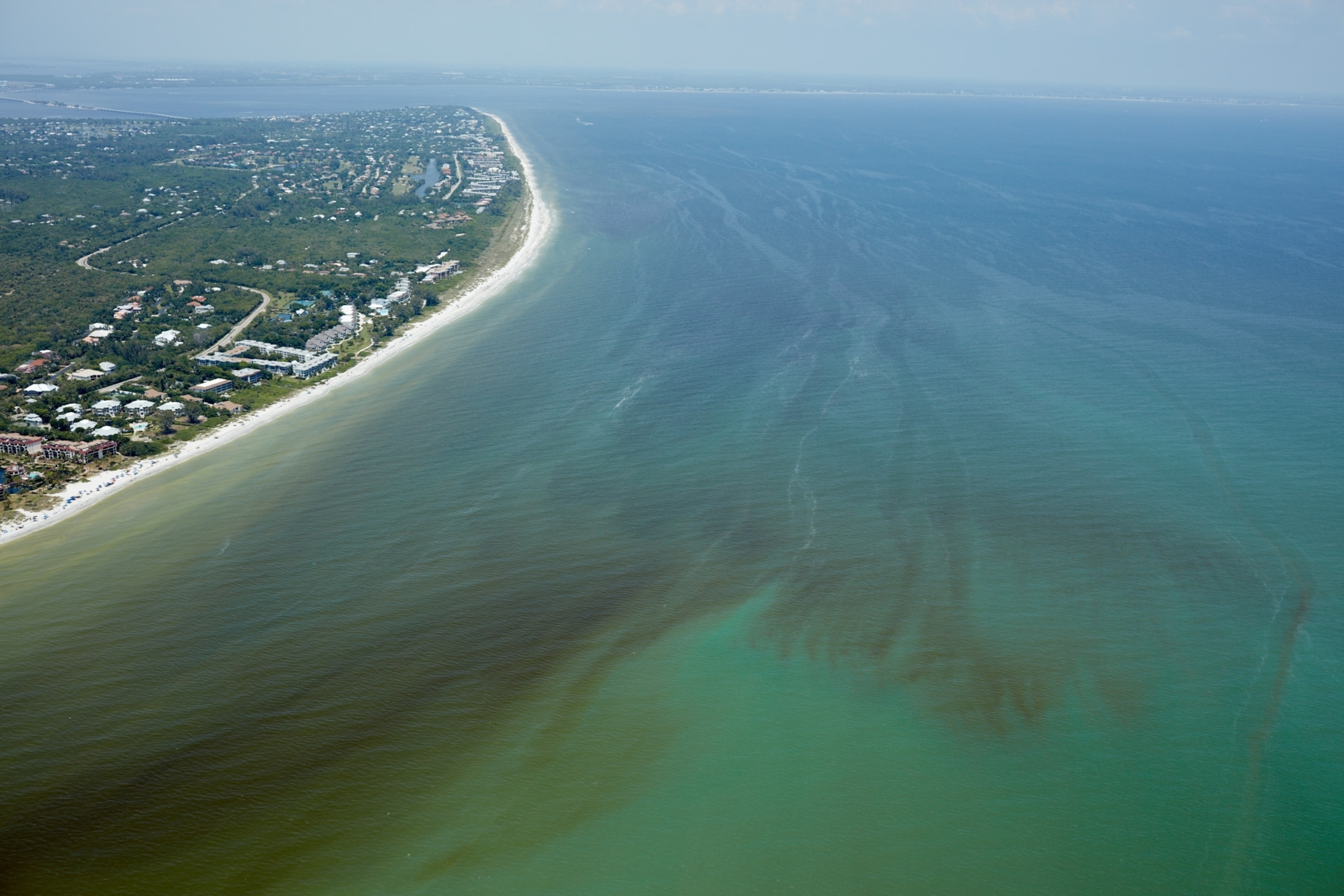 Roughly 20 million algal cells color this swath of red that recently lingered off of Florida’s southwest coast. The red tide began in October 2017, and there are no signs that the toxic plume will lift anytime soon.
Photograph by Ben Depp

The first thing you notice is the smell. It’s not a scent, exactly, but a tingling in the nose that quickly spreads to the throat and burns the lungs. But then you see the carcasses.

Thousands of sea creatures now litter many of southern Florida’s typically picturesque beaches. Most are fish—mullet fish, catfish, pufferfish, snook, trout, grunt, and even the massive goliath grouper. But other creatures are also washing ashore—crabs, eels, manatees, dolphins, turtles, and more. It's a wildlife massacre of massive proportions. And the cause of both the deaths and toxic, stinging fumes is a bloom of harmful algae that scientists say is the region’s worst in over a decade.

“It's just like a ghost town,” says Heather Barron, head veterinarian at Florida’s Clinic for the Rehabilitation of Wildlife (CROW). “Anything that can leave has, and anything that couldn't leave has died.”

Many organisms around the world can cause these harmful algal booms, which are also known as red tides for their common rust-red color. In Florida, the culprit is usually the tiny, plant-like alga known as Karenia brevis, which produces toxins, dubbed brevetoxins, that cause both gastrointestinal and neurological problems when eaten. The latest bloom now stretches around 100 miles along the coast and miles offshore, often pushed into concentrated patches by winds and currents.

Red tide in the Gulf certainly isn't new, with reports as far back as the 1500s when Spanish explorers documented what seemed to be K. brevis-like fish kills and irritating fumes. But this latest event has turned into an algal nightmare, causing many to question the reasons behind such an intense bloom, and whether humans might be to blame. There are no easy answers, scientists say, and many researchers are split on the culprits.

See The Red Tide That Is Devastating Florida's Sea Life

The algae began coloring southwest Florida’s waters in October 2017, picking up intensity in recent months. Now residents are entering the tenth month of the bloom with no end in sight.

Animals accidentally ingest the algae while feeding, which makes them “almost comatose,” says Gretchen Lovewell, program manager for Mote Marine Laboratory’s Stranding Investigations Program. “Their flippers will just be dangling there,” she says of rescuing the few live stranded turtles. But most, she says, are already dead.

Since the beginning of the year, 80 manatees have washed ashore, all suspected victims of brevetoxin. Last week, to scientists’ surprise, a 26-foot-long juvenile whale shark was even swept onto Sanibel Island's coast, its muscles rife with algae toxins. Turtles have also been hard hit; hundreds have been killed this year. Many are the critically endangered Kemp's Ridley sea turtles.

To make matters worse, Florida isn’t just suffering from red tide. The inland waterways are clogged with yet another bloom of vibrant green cyanobacteria. Runoff from cattle farms and residential developments that lie north of the state's largest freshwater body, Lake Okeechobee, carries in nutrients, turning its waters into a thick green smoothie.

Development and sugar farms south of the lake prevent the natural trickling and filtering of overflow through the Everglades. Instead, to prevent flooding of nearby towns, heavy rains force engineers to release polluted water into the estuaries that lead out to the sea. The problem has worsened in recent years—and solutions are mired in politics.

“There's just dead fish everywhere,” says local resident Tammy Hodgson, who has lived in south Florida for 25 years. There's some hesitation to spread information about what's going on for fear of further impacting local business, she explains, but something must be done.

What Lurks in the Deep

Red tide's K. brevis algae are always present in the water column, just lurking at low concentrations, according to Richard Pierce, a senior scientist at Mote Marine Laboratory and Aquarium. Exactly what triggers the massive blooms, however, remains unknown.

“We've tried and tried to look for the causes of red tide,” says Pierce. “And it just seems to be something that likes the coast of Florida.” Mote scientist Vincent Lovko thinks it’s “a perfect storm kind of event,” where the salinity, temperatures, light saturation, chemistry, and currents all conspire to produce a bloom that may be blown to shore by the wind.

Once there, however, many researchers believe the algae feeds on the nutrient-rich agricultural runoff from land, causing it to stick around for longer and rage more intensely. Some researchers say more study is needed to know for sure. But others say it’s cause and effect.

“All phytoplankton and all harmful algal blooms need nutrients, and if you add nutrients, then they'll bloom,” says SCCF's Bartleson.

What's more, recent exceptional red tide years seem to follow massive storms, Bartleson says. Both 2004 and 2005 were intense hurricane years in Florida, with multiple storms crisscrossing the state. Tons of rain and thus nutrient-rich runoff flooded into the Gulf. And then in 2005, a 17-month long red tide—the longest in Florida's records—gripped the state. Hurricane Irma blew through in 2017, which again led to massive runoff that perhaps is driving this latest bloom, says Bartleson. Scientists predict that as the climate changes, such storms will become even more intense and frequent, which could spell trouble for the future.

Recent decades have brought intense blooms, but they’re not the first. A particularly bad bloom came in 1947. The brevetoxins in the air were so thick, Pierce says, the residents of Naples, Florida, thought armed forces had poured nerve gas into the Gulf—an observation that helped scientists discover the algae’s irritating fumes.

Even so, are intense blooms getting worse?

“That's difficult to say,” Pierce says. Detailed monitoring has only happened in the last couple decades, so researchers may be finding more because they're more intent on looking.

But other researchers see it cut and dry. “We're seeing more because there is more,” Bartleson says. In a controversial study in 2007, University of Miami scientists Larry Brand and Angela Compton examined the last 50 years of data on K. brevis blooms, reporting that between 1994 and 2002, the blooms were 13 to 18 fold more abundant than those striking from 1954 to 1963.

According to Brand and Compton’s study, human-released nutrients were driving this startling rise. The pair credited more people living in Florida, and more agricultural runoff. Each year brings more nutrient-rich waters—often laden with slimy cyanobacteria—flowing from Lake Okeechobee down the Caloosahatchee river out into the Gulf of Mexico. “Those freshwater algae die, release all those nutrients, and that just feeds right into the [K. brevis] algae,” says Brand.

Bartleston likens the effects to another Gulf of Mexico algae bloom called Trichodesmium that has a domino-style effect. Iron-rich dust floating over from Africa sparks a Trichodesmium bloom in the Gulf. The cyanobacteria draw down nitrogen from the atmosphere, presenting K. brevis with a food rich in phosphorus, nitrogen, and iron. K. brevis can not only feed on the bacteria itself, Bartleson says, it can use the released nutrients as the cyanobacteria dies and decomposes.

But Mote’s Lovko cautions against hastily drawing conclusions. “If those nutrients make it out to the coast—as with other algae, seagrasses, seaweeds—if there's a red tide present, it can utilize those nutrients,” he says. “Whether or not that actually occurs...we don't know if that's the case.”

The debate over causes seems endless. Today, are Florida's red tides human-caused or entirely natural? “The answer is probably some of both,” says Donald Anderson, director of the U.S. National Office for Harmful Algal Blooms.

Worldwide, human-made nutrients drive many algal blooms, says Anderson. Take China, for example, where thick carpets of vibrant, and fibrous, green algae has frequently blanketed Qingdao Bay. The green mats form south of the region in seaweed farms along the coast of Jiangsu Province. Removing it from nori racks, farmers toss it into the Yellow Sea, where it thrives in the nutrient-rich waters, before currents sweep it into the bay.

But in other places, the human story isn't so clear. In Maine, for example, 95 percent of the nutrients seem to come from natural sources, Anderson explains. The algae that causes the region's blooms, Alexandrium catenella, mostly lingers in two offshore locales. Periodically the winds and currents carry in some of that algae, causing nearshore shellfish toxicity.

Yet, there seems to be a global expansion of such harmful algal blooms. And many driving factors are behind this rise. Some have suggested climate change is to blame, since many harmful algae blooms thrive in warm waters. Yet modeling these systems and forecasting climate change-related blooms remains a challenge. Increasing nutrient runoff could also be at fault, with dense aquaculture operations likely contributing to marine nutrients. What's more, the apparent expansion is, in part, likely due to more scientists studying harmful algal blooms and better methods to detect toxicity.

In Florida, Mote scientists have been developing a patented system to mitigate the red tide's toxic effects. It uses the highly reactive molecule ozone—which is composed of a trio of oxygen atoms—to destroy all organic compounds, including algae and brevetoxins, while oxygenating the water. They’ve successfully tested the system in a 25,000-gallon tank and are now prepping for a pilot project in a local canal, clarifying around 600,000 gallons of water.

For now, however, scientists are continuing to monitor the blooms in Florida, hoping eventually to be able to forecast these events. But the death toll continues to climb. “Wildlife is kind of the proverbial canary in the coal mine,” says CROW's Barron. “And right now, the canary just died.”

A startling sunset reddens the Lemaire Channel, off the west coast of the Antarctic Peninsula. The continent’s coastal ice is crumbling as the sea and air around it warm. This photo originally published in “The Larsen C Ice Shelf Collapse Is Just the Beginning—Antarctica Is Melting.”

Photograph by Camille Seaman
The National Geographic Society helped fund photography for this article. Go to nationalgeographic.org to learn more.