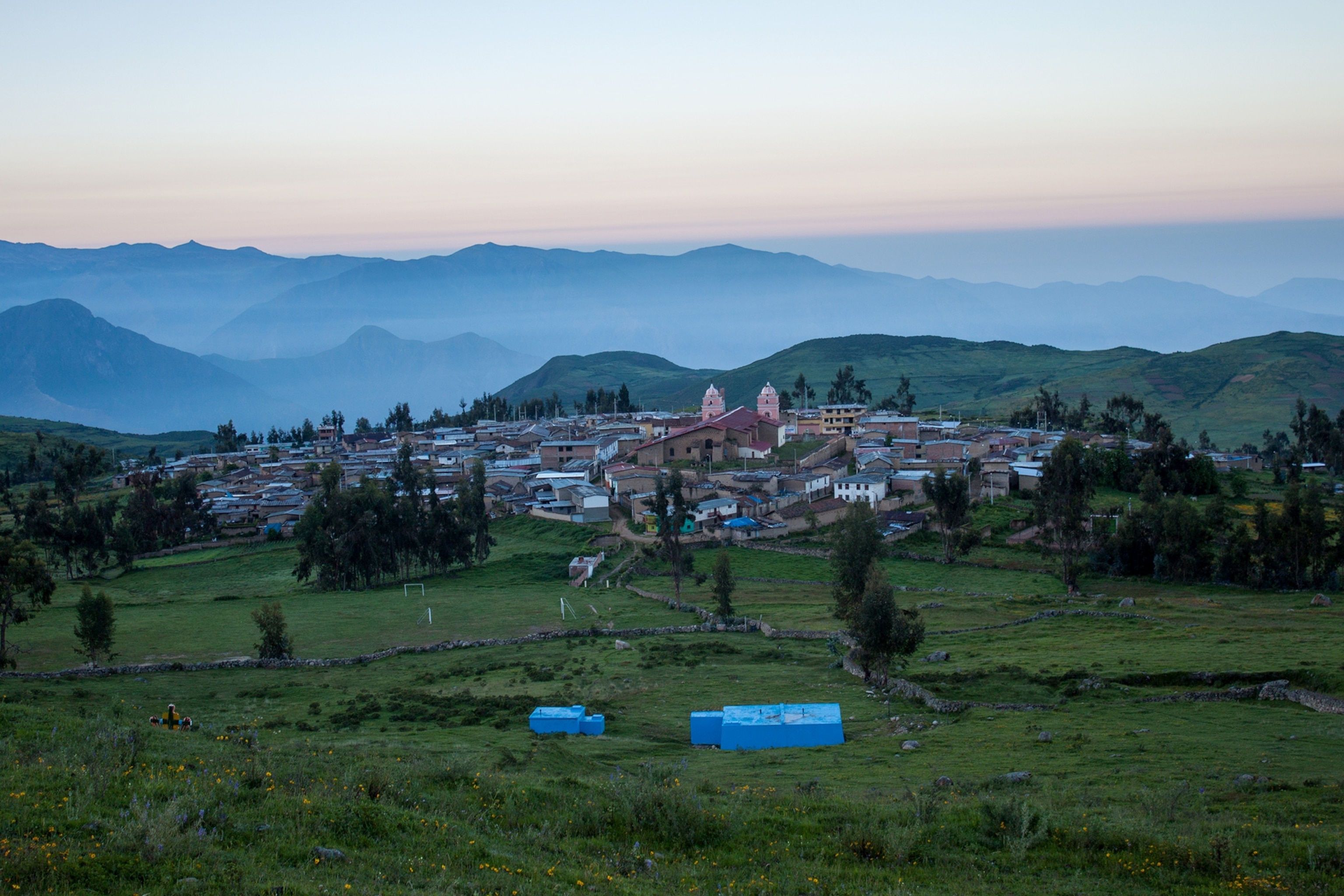 Seeking relief from dry spells, Peru’s capital looks to its ancient past

Fixing the 1,400-year-old system of shallow canals in the Andes above Lima would make more water available during dry seasons.

Panoramic view of the community of Huamantanga in the central Andes, where some functioning pre-Inca amunas are located. The city of Lima is located downstream from the village.

Peru’s coastal desert has a long dry season, and past cultures—the Inca, Nasca, Chavín, and Wari—all figured out ways to make the most of wet season rains. In Huamantanga, an Andes mountain village a couple hours’ drive from the capital city Lima, people still use a 1,400-year-old technique to capture rainfall in shallow canals made of rock called amunas and route the water to sandy, rocky places where it will soak into the ground.

Because water moves more slowly below ground than on the surface, the captured rainfall emerges some time later from underground springs, effectively shifting water availability into the dry season.

Now, for the first time, researchers have measured and modeled how restoring and using additional amunas—which exist in different parts of the Andes highlands, although many have been abandoned—could help Lima, the second largest desert city in the world. With a population pushing 10 million, Lima has dams and reservoirs to help it through the dry season, but the city still falls short: The average dry season deficit is 43 million cubic meters of water. Lima’s total annual demand is 848 million cubic meters.

By diverting 34.7 percent of wet-season stream flows throughout the Rimac River watershed into the amunas, 99 million cubic meters of water could be shifted into the dry season, more than double what’s needed, reported the authors of a study published in July’s Nature Sustainability.

With dye tracers and measurements of water quantity along the flow path, the researchers showed that the ancient canals did in fact move water underground, where it made its way down the mountain, eventually emerging from springs. How much later was one of the key findings: the water reemerged two weeks to eight months later, with an average time underground of 45 days.

Scaling up use of amunas would increase Rimac River flows by 33 percent at the beginning of the dry season and could postpone the date when water managers turn to the reservoir supply.

Local people helped researchers map certain canals’ links to specific springs. The dye test proved that they were “very accurate,” says Boris Ochoa-Tocachi, lead author of the study and a civil engineer at Imperial College London. “That surprised us.” It showed the vast potential “to rescue and revalue indigenous knowledge to complement modern science to provide solutions to current problems,” he says.

Restoring additional amunas throughout the mountains above Lima will likely prove even more valuable as natural water storage features such as glaciers and snowpack disappear with climate change, said Graham Fogg, a hydrogeologist at the University of California at Davis who was not involved in the study.

Fogg added that the potential benefits may be even greater than the researchers calculated. Groundwater systems “are really big” relative to most surface systems, such as rivers and streams, he says. “You can increase pressure in one part [by diverting surface flows underground] and it increases groundwater levels potentially tens of miles away.”

The researchers know of only three rural communities that maintain some amunas to extend water availability for crops and animals in the dry season, said Ochoa-Tocachi, and they have cultural practices and festivals to clean and maintain the canals.

Modern enhancements, such as sealing canals with concrete, won’t deprive local people for the benefit of urban dwellers, he said, because both the amunas and the springs where water emerges are above the village. Much of the water that villagers divert for local crops will ultimately soak into the ground and find its way back to the river, where it will also benefit downstream users.

Peru is a world leader in laws and policies that support using natural ecosystems to provide humans with critical resources such as water. And public water utilities set aside a percentage of their fees to pay for nature-based water protection. Although the amunas were created by people, they are considered nature-based systems because the water is stored in the soil, Ochoa-Tocachi said.

Making such projects eligible for government and utility funding requires showing that the money spent delivers valuable benefits, data that is currently lacking compared with “gray infrastructure” solutions such as large concrete dams. To that end, says co-author Bert De Bièvre, coordinator of the Regional Initiative for Hydrological Monitoring of Andean Ecosystems, “this paper is very significant” in providing numbers, showing that these projects are worth the investment.

A solution like amunas costs about one-tenth that of gray infrastructure, said Ochoa-Tocachi. Also, climate change is altering precipitation patterns in Peru, tending to make wet seasons wetter and dry seasons drier. As water managers adapt to this new reality, building expensive, big dams is not the answer, the researchers suggested.

Instead, restoring the amunas over a wide area would be cheaper and more can be restored as needed, making them a more flexible approach. The paper concluded that securing Lima’s water future will likely mean a hybrid approach of using ancient and modern technologies, as well as nature.