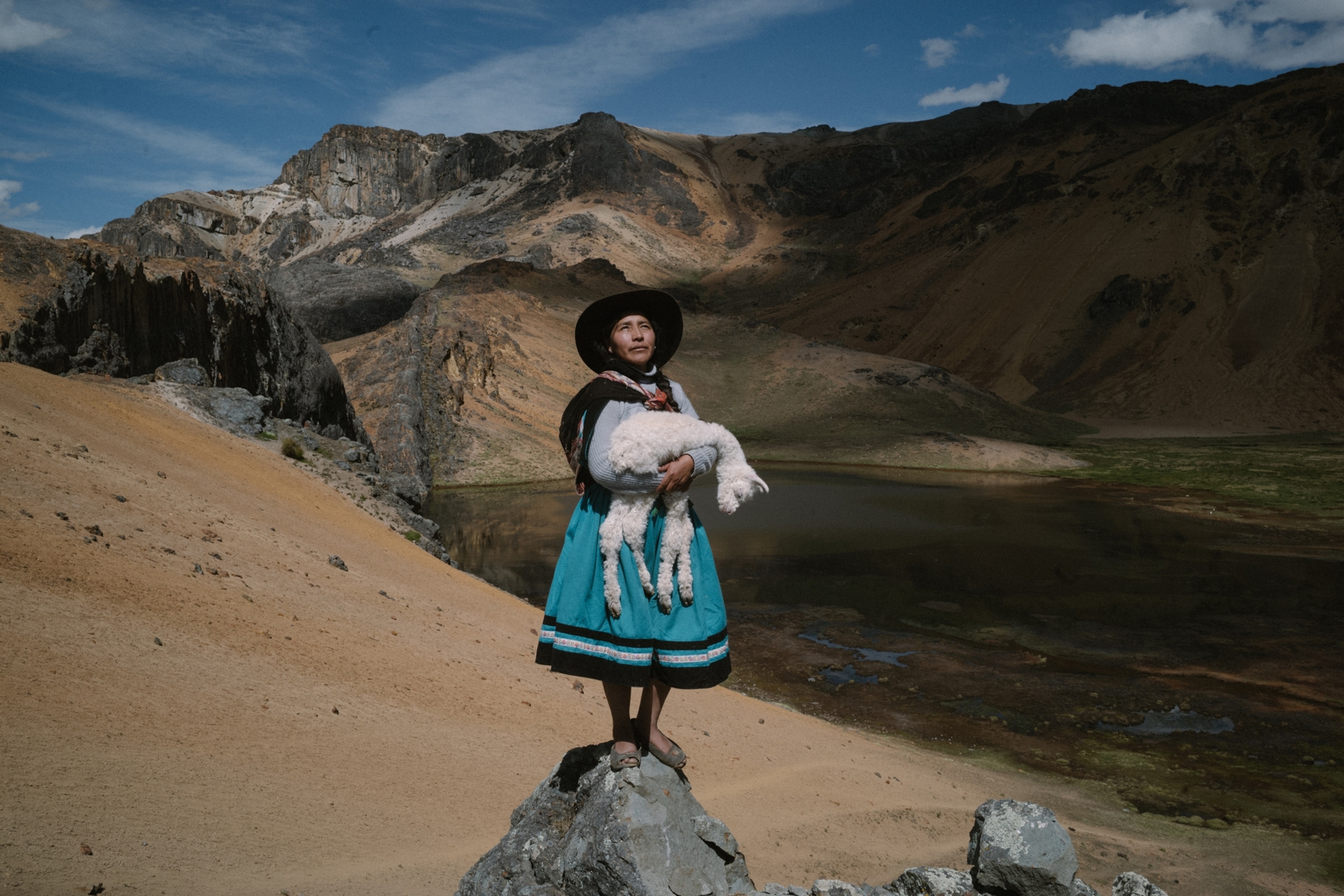 The high-altitude quest to save alpacas

The once-verdant mountain pastures where alpacas graze are drying out from climate change; scientists, herders, and activists are rallying to find solutions.

Alina Surquislla Gomez cradles a baby alpaca. Her family has worked with alpacas for three generations and has witnessed the impacts of climate change in Peru on the herds, from unpredictable rainy seasons to pastures drying up.

LAGUNILLAS, PeruRufino Quico remembers when his pastures turned green each November as spring rains arrived on the high Andean plain where his herd of 380 alpacas grazes.

Quico was born in Lagunillas and lives in the same adobe house as his forebears. His family has tended alpacas for generations, as far back as they can remember. Now 57, he is not sure his children will be able to follow in his footsteps—or even if his beloved hamlet, which stands at 14,000 feet above sea level and is home to 56 families of alpaca herders, will survive the coming decades as climate change remakes the landscape.

“Our pastures should have turned green, but look at them. They are yellow and of little use to our herd,” he said, as he gazed across the vast expanse of spring grasses withering under intense sun and crystal blue skies in the Puno region of southeastern Peru.

Climate change in the Andes has rewritten weather patterns in ways that have affected alpacas at every stage of life—from increasing mortality of newborns to shrinking grasslands where herds feed. Abrupt changes in precipitation, as well as ice melt as glaciers retreat, are wreaking havoc on both alpacas and the communities that raise them.

The Peruvian highlands are not lush and historic records show that precipitation has never been plentiful. But it was enough to sustain alpacas. Alpacas give birth only in the first three months of the year, during the rainy season. Now, that once-reliable season, which moderates temperatures, has become erratic. Alpacas are very sensitive to cold, and brusque swings in temperatures, including cold snaps that have killed thousands of alpacas, are making herds vulnerable to illness and contributing to a higher death rate among newborn animals.

Rodolfo Marquina, head of Descosur, a nonprofit that works on economic development in southern Peru, said the climate changes “have impacts for all aspects of alpaca rearing.”

Complicating the situation is the retreat of glaciers, which is reducing stream flows that experts say have long supported the high meadows and wetlands during the long dry season between April and November. One hectare of thick marsh grasses, which grow all year, can easily host 25 alpacas, while one hectare of regular pasture is only enough for one animal to graze, says Oscar Cárdenas, who heads alpaca programs for the National Institute for Agrarian Innovation (INIA), a government research center.

“Glaciers are the foundation,” said Cárdenas. “If the marshes disappear, alpacas will disappear with them.”

Oscar Vilca, who is in charge of southern glaciers for Peru’s National Glacier and Mountain Ecosystem Research Institute, has been sounding warning bells for some time. According to the institute, Peru’s glacier coverage dropped from 926 square miles in 1962 to 430 square miles in 2016, the last year a national glacier inventory was conducted. It represents a 53 percent reduction in 54 years.

“Climate change is affecting the region’s hydrological potential,” he said. “This has an impact on alpacas and the people and communities that depend on them for their livelihoods.”

Peru is home to about four million alpacas, more than 70 percent of the world’s alpaca population, according to the INIA. Neighboring Bolivia has the second largest population, which is less than 10 percent of the total. Australia, where alpacas were introduced in 1980, ranks third.

The alpaca was domesticated in Peru at least 6,000 years ago. The animal is a member of the camel family and appears sturdy, Cárdenas said, but throwing off even just one variable, such as a decline of nutrients in pasture grasses, can quickly decimate populations. In the 16th century, herds tended by the Inca were all but wiped out after the Spanish conquerors arrived in 1532. Slaughtered for food and exposed to fatal diseases—primarily mange carried to the Andes by sheep and goats imported by European settlers—Peru’s alpacas were nearly completely eliminated within a century. Alpaca populations began to expand around 1900, mainly as demand for alpaca fleece grew.

Cárdenas said the changing climate may not prompt such a mass die-off, but one immediate consequence could be a change in the animals’ coats, making the fleece less valuable. Two varieties of alpaca exist: huacaya, which is short-haired, and suri, which has long hair. Around 80 percent of alpacas in Peru are huacayas, with 12 percent suris, and the remaining number represented by cross-breeding with llamas and vicuñas, an undomesticated cousin in the camel family.

Peru’s alpaca herds produce around 7,600 tons of fleece yearly. Adults, which can weigh around 140 pounds, produce around 4.5 pounds of fleece annually. The fleece is categorized by color and quality. There are 22 shades of fleece, but white is the most common and the most sought after. Fleece is classified into seven texture categories, from super fine, which fetches the best price, to short and thick, which is discarded.

The fleece is used principally in garments, but also in blankets and household items. Peru earned approximately $121 million from alpaca exports in the first seven months of 2021, on par with exports from pre-pandemic 2019; the pandemic crashed the alpaca fleece industry in 2020. Exports go principally to China, Italy, and the United States.

Help is on the way

In recent years, a variety of scientists, herders, and activists have begun testing solutions to bolster the survival of the alpacas, which in turn will help save the communities like Lagunillas that raise them. At the INIA’s Quimsachata Research and Production Center, headquartered in the Puno region, home to the largest genetic reserve of alpaca breeds, Cárdenas’ team is working on a genetics project. He is using approximately 3,200 animals to preserve the genes of colored alpacas to make sure the colors do not disappear. The center is also focused on developing methods to help alpacas adapt to rising temperatures at high elevations, and thrive at lower elevations.

“The climate is crazy—unstable—and this leads to numerous problems. In addition to nutritional problems caused by weaker pastures, we are dealing with parasitic issues because of climate change. We are seeing an increase in mange, lice, and chiggers at elevations where they did not exist before,” he said.

Alpacas can survive at lower elevations, which is how herds have expanded in places like Australia and the United States, but their coats grow coarse. The fleece can be used for hats and gloves, or blankets and rugs, but it cannot be spun into fine yarn for high-end garments. In warmer temperatures, alpacas also suffer from illnesses not present in highland areas, requiring expensive, hard-to-get medication that can affect fleece quality.

The INIA also has been working with communities to develop low-tech solutions, including constructing stalls that can shelter herds and growing hardier forage crops, such as clover, that can supplement diets during the dry season. The Agriculture Ministry in 2020 launched a three-year program to install 2,300 livestock stalls in high Andean communities.

Alpaca breeders are also working on solutions. Those with ample land are able to move herds in search of pastures for grazing. Alina Surquislla, 35, works with her extended family to manage 500 alpacas over a rugged chunk of land in the Apurimac region to the west of Puno. She and her family tend the herd at lower elevations, around 14,000 feet, during the rainy season, gradually moving them higher as the precipitation ends and pastures begin to yellow. She has herded alpacas as high as 17,000 feet to look for pastures. Her family has also drilled wells where they can find water.

In Lagunillas, Cristina Condori, 49, has depended on precipitation during the rainy season for her 200 alpacas. Now, Condori and her family have turned to pre-Columbian technology to build earthen canals to trap water in small reservoirs lined with plastic to keep water from seeping into the soil. They, too, have been drilling wells where they can.

“My family has been trying to find solutions, because this is our livelihood and it is what we have been doing for generations,” she said.

Traditionally, alpacas roam freely through the meadows. Now, Quico said, the community is building fences for the first time to better manage where herds graze to give pastures a chance to rejuvenate. Standing on the steps of the hamlet’s small padlocked church, he looked up at the exposed barren peaks in the distance, now free of their glacial ice.

“Climate change is alarming,” he said. “But we are doing what we can to adapt. We are constantly looking for the best solutions.”

This story was produced in partnership with the Pulitzer Center.

Based in Peru, Alessandro Cinque photographs the environmental consequences of climate change, especially in Indigenous populations.

The National Geographic Society, committed to illuminating and protecting the wonder of our world, has funded Cinque's work. Learn more about the Society’s support of Explorers.