The results are in: What women think about harassment, the job market, and feminism in 2019

A new poll reveals surprising insight into women's personal lives and their views of American society.

At age six, after countless hours spent waiting for her dad in the airport, Jessica Reinschmidt decided to become a pilot. She would watch them walk through the terminal, uniforms crisp and luggage in hand. “I can count on one hand the number of women I saw,” she says. Forty years later, as a captain for a major airline, she’s among the six percent of commercial pilots who are women. From Seattle, where she’d just landed a flight, Reinschmidt recalls some of the most hostile moments in her 14-year career: a colleague calling her a diversity hire; a captain mistaking her for a flight attendant; passengers who refused to board after seeing two women in the cockpit. “You’re constantly proving that you know how to fly,” she says.

Reinschmidt was one of more than a thousand women who participated in a National Geographic/Ipsos poll which set out to explore the perspectives of women across socio-economic, age, racial and political demographics, about their lives, the challenges they face at work and home, and the state of equality in the United States. What did we learn? In 2019, at a moment of global demand for female empowerment, and approaching the 100th anniversary of American women getting the right to vote, women are still grappling with whether it’s possible to “lean in” and have it all in life and work.

As National Geographic begins a year-long series of stories about the state of women, the National Geographic/Ipsos poll, conducted using Ipsos’ KnowledgePanel, found that women think prestigious jobs in once male-dominated professions such as medicine, finance, and academics offer as much opportunity for them as men. And while the majority of women feel they haven’t been discriminated against due to their gender, they overwhelmingly believe that sexual discrimination and harassment is a national problem—as big as racial discrimination, many said. Though 69 percent of the women surveyed don’t consider themselves feminists, their answers describe many gender-related challenges. And slightly more than half say it’s easier to be a man in America today.

What are women thinking

asked more than a thousand women

in the U.S. about their lives and

Here’s some of what they said.

How much of a problem do you

think each of the following is in

a problem at all

For each of the jobs indicate whether

you think the opportunity for women to

advance in that profession is better,

worse or about the same as it is for men.

Same as it is for men

*Two percent of respondents did not answer

the question; in other categories it was

one percent or less. Because of rounding

SOURCE: “A SURVEY OF WOMEN,” 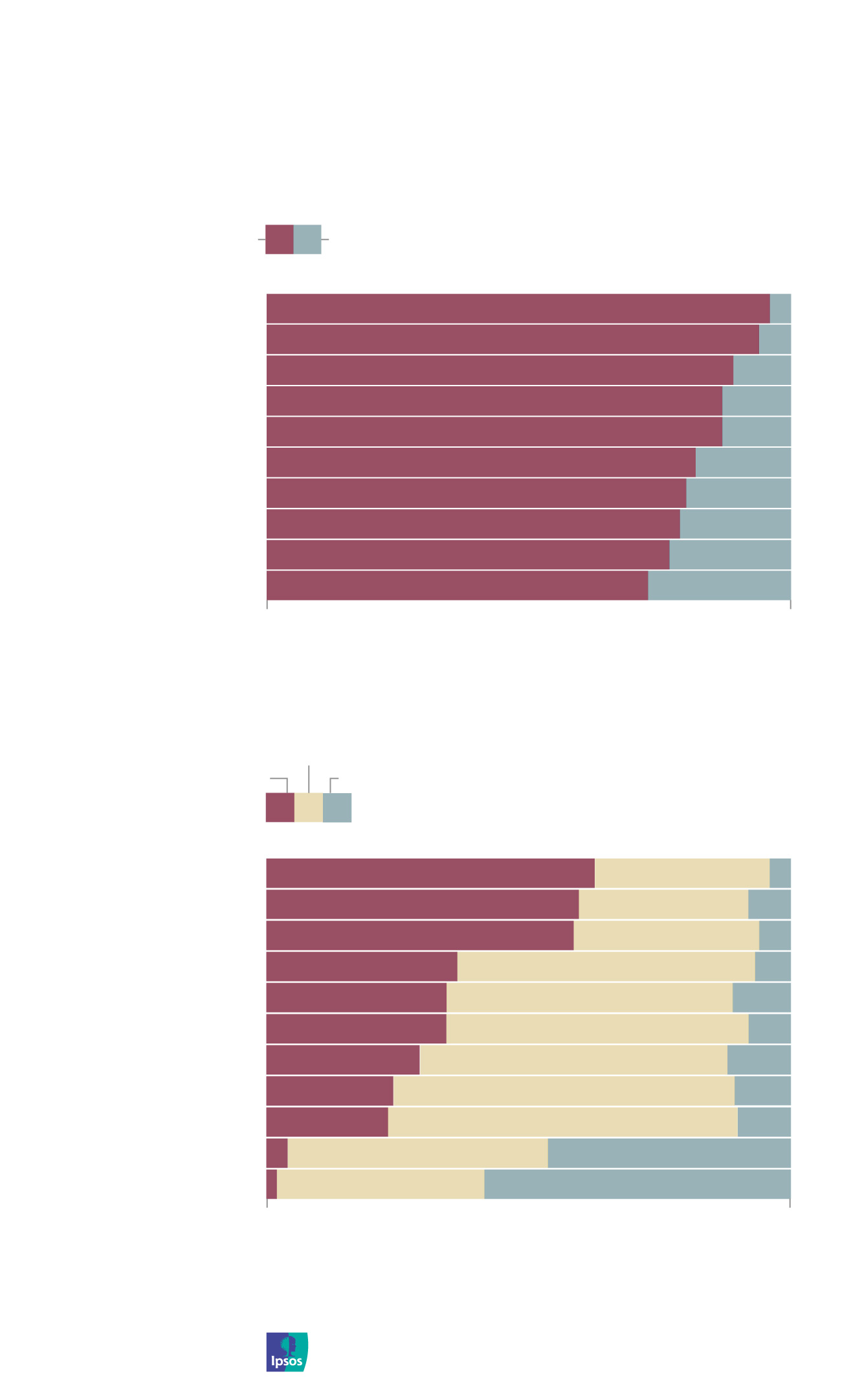 What are women thinking about in 2019?

A National Geographic/Ipsos poll asked more than a thousand women in the U.S.

about their lives and perceptions of national issues. Here’s some of what they said.

How much of a problem do you think each of the following is in the country today?

a problem at all

to advance in that profession is better, worse or about the same as it is for men.

Same as it is for men

*Two percent of respondents did not answer the question; in other categories it was one percent

or less. Because of rounding not every category adds up to 100%.

SOURCE: “A SURVEY OF WOMEN,”

Among those polled, a stockbroker was kept from the big-money clients, a member of law enforcement with excellent performance reviews was never promoted, and a businesswoman was never invited to the golf game. The stories spilled out: of workplace solicitations, being ignored by doctors, left out of networking events, and barred from the basketball team. “In America, how can you NOT be treated differently because of gender?” one woman wrote. “I've had to change the way I talk, dress, write, approach people, etc., so as not to offend male sensibilities.”

Only 38 percent of white women polled think it’s important to elect a woman president compared with 55 percent of black and Latina women. And, slightly less than a third of all women polled self-identified as feminists. That stacks up globally, says Elisabeth Jay Friedman, a professor of politics at the University of San Francisco, citing a recent Ipsos poll that found a similar figure across 27 countries. Yet, digging into both polls shows that most respondents also supported the type of equality that the feminist movement has advocated for during the past half century: fair pay, equal opportunity, shared family duties. “In their lived experience, personal and professional, people are saying they believe in gender equality,” says Friedman—even if they reject the label.

So, what are the problems in the U.S. today, according to the women polled? The cost of health care, sexual harassment, violent crime, gun violence, terrorism, racial discrimination, climate change and affordable child care were the top issues. When asked if they’d personally experienced discrimination or been treated unfairly due to their gender, 60 percent of the women polled said no. Older generations reported less discrimination than younger ones. That could be due to a lack of awareness, says Friedman.

“If you grew up with certain expectations around what’s appropriate for your gender, you may have taken a lot of what we think of today as unfair treatment, but said, ‘That’s OK. It was appropriate for that guy to get a raise because he was head of the household and I was getting married,’” says Friedman.

In the past few years, accusations against powerful men such as Harvey Weinstein and Matt Lauer have dominated headlines and awareness of sexual harassment has surged to the national stage. This top-level reckoning may be why more than 80 percent of the women surveyed identified sexual harassment as a problem in the country.

“Those numbers are high,” Jane Junn, a professor of political science and gender studies at the University of Southern California, says of the poll results. Issues highlighted by the Me Too movement has shifted public perception of a topic that had gone unspoken for decades, she adds. Thirty years ago, “no one would have asked this question because sexual harassment was an everyday part of the job.” Though these issues are under a global spotlight, tackling them on the personal level is still difficult for the average person. “It happens to you and what are you going to do? You can’t afford to lose your job. So you don't say anything about it,” Junn says. “But you watch other women say something about it. And powerful people are taken down. That allows you to say, yes, it’s a problem.”

How does the job market in 2019 look for women? We proposed a list of jobs and asked about women’s opportunities to advance in those fields. While a few—the military, professional sports, and politics—were thought to be harder for women, the majority of professions listed were perceived to provide equal opportunities. Only one, nursing, was considered to give women a better shot.

Workplace inequality, says Junn, is most severe at the highest levels—Congress, top universities, the most profitable banks, or the most competitive Silicon Valley companies. Though Congress is still overwhelmingly male, a historic number of women were elected in 2018. Local- and state-level politics are increasingly equal. The student body in colleges across the country tilts female and so does the median voter, which makes Junn optimistic. “Education and politics—you have to have women in those places to change young minds and make better policies,” she says. “If you’re in a position to understand what it means to be on the receiving end of the patriarchy, then you will vote to change it.”

The women we polled found inspiration in famous women including Michelle Obama, Ruth Bader Ginsberg, Condoleezza Rice, and Melania Trump. Some mentioned their own mothers, women in the military, working women and, of course, Oprah. They offered words of advice to the younger generations in America. “Breaking the rules is a form of resistance and it’s your best bet to get to where you want to be,” one wrote. Many promoted getting an education and working hard. One advised to stop saying the word “like.” Others were more blunt: “Stop bitching. Make your own way and never ever depend on a man.”

Junn had her own piece of advice—to keep fighting. “It was only a hundred years ago that women gained the right to vote in the U.S.,” Junn says. “We still have a big, big disadvantage. You have to be cautiously optimistic. Nothing worthwhile comes easy.”

For Jessica Reinschmidt, things are different since she first climbed into the cockpit for a lesson 26 years ago. “As we’re starting to retire more and more of the pilots that grew up in that era of man and wife rather than husband and wife, it is changing,” she says. “Just as we’re hiring more women, we’re hiring more men who grew up in households where mom worked and mom and dad were partners.”

METHODOLOGY – This National Geographic/Ipsos poll was conducted by Ipsos Public Affairs‘ KnowledgePanel® September 25-October 2, 2019, in English and Spanish, among a random national sample of 1,014 women in the U.S., ages 18 and over. Results have a margin of sampling error of 3.3 points, including the design effect.