Caught between Hitler's troops and Stalin's: How one family escaped

A mother recounts her journey of survival during the final years of World War II.

The author’s mother, Helena Sigman (nee Elena Vorobiova), holds a photograph of her father, Arkady Vorobiov, and herself, age four, enjoying time together outside Kiev in 1938. Throughout their years as refugees, Arkady made sure his daughter studied math, grammar, and Russian poetry.

Caught between Hitler's troops and Stalin's: How one family escaped

A mother recounts her journey of survival during the final years of World War II.

One of my mother’s earliest memories of the war is of a well-fed German boy about her age—seven or so—slipping her the outer skins of the salami his family presumably had just enjoyed. The boy lived across the garden in a five-story apartment building taken over by the Nazis who had occupied Kiev. The Nazi party viewed the city’s residents as “superfluous eaters,” and fertile Ukraine as the Reich’s breadbasket.

Born Elena Arkadyevna Vorobiova in 1934 to ethnic Russian parents living in Ukraine, my mother would spend much of her childhood as a war refugee. (Her name would evolve into Helena Sigman after she entered the United States in 1948, through the name-dissolving institutions of Ellis Island, as well as two marriages.)

We talk in the living room of my Washington, D.C., home, soon to leave for the airport and a return flight to her home in Arizona. The airspace between our lives will become an insurmountable divide when the coronavirus hits, but for now we are together and talking. She wants to hear about my recent reporting trip to Russia to interview veterans and survivors of World War II. And I’m eager to hear—not for the first time, but now with more attentive ears—her memories of the years she and her family spent on the run from two mortal enemies: Germans and Soviets.

In the decades prior to World War II, Ukraine suffered terribly under Stalinist rule. Then, on September 19, 1941, Kiev fell to the Nazis after weeks of fierce fighting that inflicted heavy losses on the Soviet Army. My mother recalls seeing a “whole flood of people” being marched down a street near her family’s home 10 days later. “Zillions of people carrying small little blankets or packages, sometimes suitcases, but small things. And there were lots of [Soviet] soldiers among the captured.”

journey from Ukraine to the 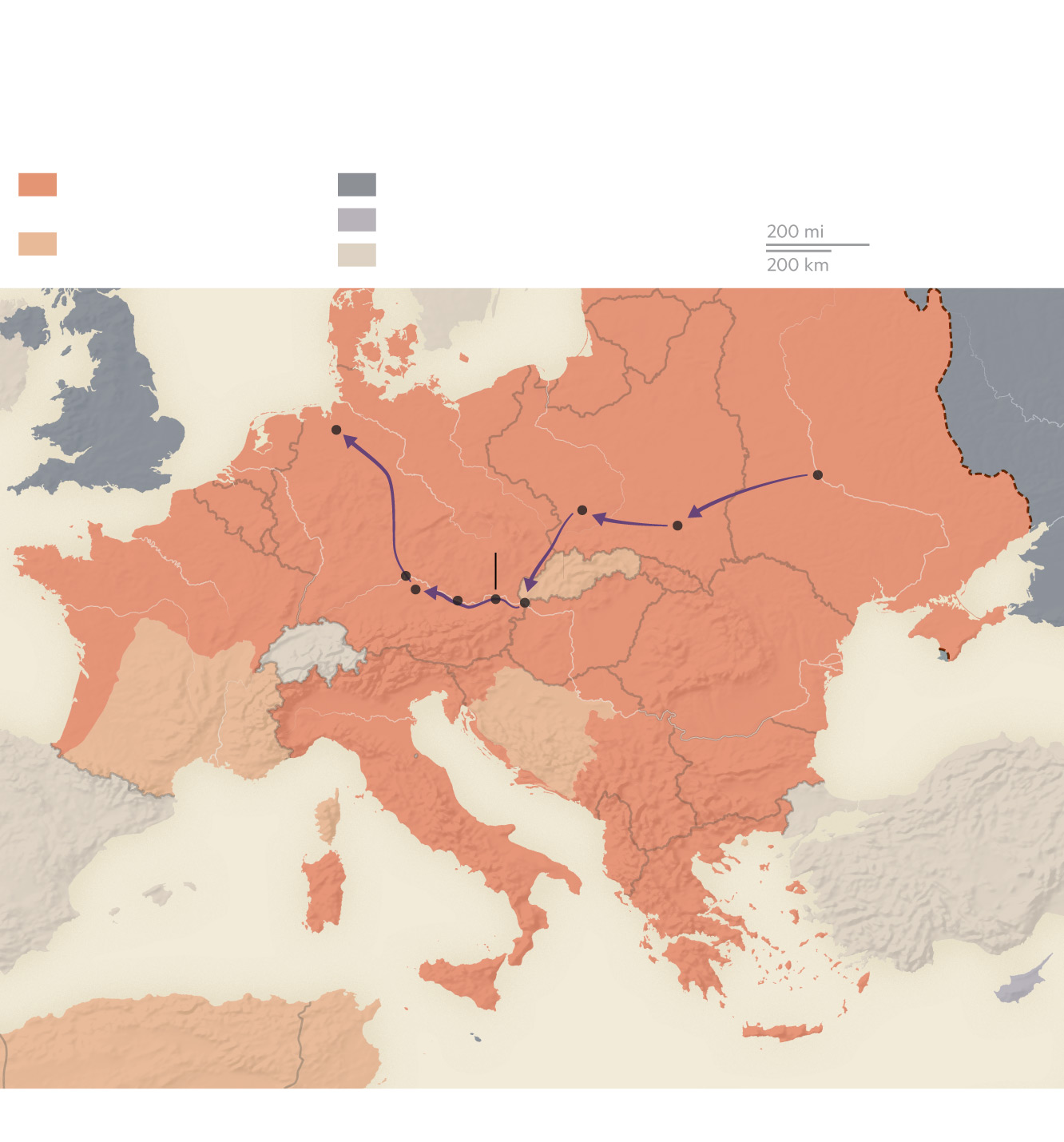 Onlookers soon learned what they had witnessed: the death march of more than 33,000 Jews, POWs, Romanies, and others. The Nazis had herded them into a ravine outside Kiev and shot them dead, allegedly in retaliation for explosives planted by retreating Soviet troops. The Babi Yar massacre, as the atrocity came to be known, was one of the most infamous war crimes of World War II.

“There was a young man in that flow of humanity,” my mother tells me. The watching crowd must have “allowed him to disappear into their mass, and they sheltered him. He ended up in the little backyard of the house we were staying in.”

The Soviet soldier asked my mother for clothes so he could shed his uniform and disguise himself as a civilian. “So I went into our room and found Papa’s clothes and brought them to him, and a big basin with warm water and soap so he could wash a little. He was very dirty.” She thinks he was in his late teens.

Stories may change over time, and so might listeners. My mother told me this tale when I was younger, but now that I have a teenage son of my own, it affects me in ways it never did before. I once thought of the soldier as a hulking man. Now I picture him as a big, frightened child.

My maternal grandfather, Arkady Vorobiov, had fought against the Red Army in Russia’s civil war. He despised the Soviet regime, which had killed millions in a politically orchestrated famine. When the Nazis first surged into Ukraine, he disobeyed the Soviets’ scorched-earth retreating orders to blow up the hydroelectric dam where he was head engineer. The Nazis forced him to continue working at the power plant, but he defied his brutal masters whenever he could, at one point even hiding a Jewish co-worker in his one-room home.

Last generation of the war

I tell my mother about some of the people I met during my trip to Russia in January to report on surviving voices of WWII. My most memorable encounter was with 95-year-old Maria Rokhlina, who had served in the Soviet Army as a combat medic. She survived the six-month siege of Stalingrad, holed up and freezing in a tractor factory. The battle for the city was one of the largest and longest in history, with staggering losses on both sides. When Soviet forces finally prevailed in the summer of 1943, their victory turned the tide of the war against the Germans—and altered my forebears’ fate. By the fall of that year, the Soviet Army was battling its way into Ukraine. My mother’s family would soon be caught in a double trap, fleeing two fronts at once.

By this point in the war, millions of Ukrainians had been deported to Germany as Ostarbeiter, or “Eastern workers.” With most able-bodied German men away at war, the Reich depended on forced labor to keep its war machine running. Now, in their hasty retreat from Ukraine, the Nazis swept up all the human labor they could, including my mother and her family. Taken to a railway station and packed into an open cattle car, they couldn’t know they would never again see their homeland.

When the train stopped in Lvov (then part of Poland), “no one seemed to be guarding anyone anymore,” says my mother, so everyone fled. For the next 20 months, until Germany surrendered in May 1945, my mother’s family hopped on trains when they could or walked westward through Nazi-occupied Europe, taking pains to move unnoticed and steer clear of the war’s shifting fronts. At times they slept in bombed-out buildings, but more often they bedded down outdoors or in barns. Gifts of milk or bread from farmers were not uncommon. Each night they bandaged their blistered, sore feet. (The brutality of WWII still haunts children who survived it.)

My mother recalls seeing dead bodies in fields, some frozen to death, some riddled with bullets. Attack by strafing warplanes, both Allied and German, was a constant danger. Like other refugees, they hauled their few possessions—clothes, photographs, a doll my mother has kept to this day—in a small wooden wagon about four feet long with metal wheels. (All rubber went to military vehicles.) When they came to cobbled streets, my mother’s job was to walk ahead of the noisy wagon so she could hear the thrum of approaching warplanes.

In 1944 the family reached Heiligeneich, Austria. One night, my mother recalls, the sky was so red that all were watching. She believes it was Vienna under siege, burning in the distance.

Throughout those many months on the move, my grandfather insisted that my mother continue her schooling, whether in bomb shelters, under trees, or in actual schools whenever they stayed in one place long enough to take classes.

In Heiligeneich she was allowed to attend a school run by nuns. The sisters had a radio, and my mother remembers hearing an alert that sounded like a cuckoo, signaling that American bombers had crossed Denmark. Then the students would run to predetermined shelters to meet their families.

Crossing into Bavaria, the family found an abandoned farmhouse a few miles from Dingolfing. They moved in with another Ukrainian family, named Zalisko, and together they hid from the chaos of Germany’s collapse until the end of the war.

The Zalisko family included a daughter my mother’s age, and a teen son who had been blinded when he found an unexploded hand grenade. The girls made a happier discovery: an orphaned fawn they named Ricki. The deer followed them whenever they hunted for mushrooms and berries to trade with farmers for food and milk.

“I’d put the milk in a dish and put two fingers in, and the fawn would suckle my two fingers,” my mother recalls with a smile. “He became a friend, and he followed this girl and me wherever we went.”

Her smile vanishes and she fights back tears as she tells me about the day Ricki was trailing far behind them while they walked to trade foraged mushrooms. By then the U.S. Army had arrived in Bavaria, and as a truck full of soldiers was passing by, a shot rang out and the deer fell dead. The girls screamed and ran to their dead pet as the truck drove away. Later my mother learned that a local farmer, certainly hungry in those lean times, had taken the deer away afterward and eaten it.

“At certain moments it all comes back,” my mother says, surprised by the force of her memories. “It’s like there’s some secret key, and suddenly what happened—what feels like a hundred years ago—feels like it’s happening now.”

After the German surrender, my mother’s family moved into Dingolfing until 1946, then on to a refugee settlement in Regensburg, where they stayed for two years. Returning to Kiev was out of the question, for it would mean certain death. Where to go? They applied to immigrate to Argentina, which needed farmers, but an immigration clerk looked at my grandfather’s hands and knew right off that he’d never farmed a day in his life.

A chance encounter with a distant relative garnered an invitation to Nebraska, and the Church World Service helped the family gain admission to the United States. In September 1948 they left the port of Bremen bound for Ellis Island.

My grandparents found work as hospital janitors in Lincoln, Nebraska, and my mother started school without knowing a word of English. In the early 1950s they learned that the San Francisco Bay Area was home to a large population of Russian speakers, so they pulled up stakes and moved once more.

In 1957, when the Soviets launched the world’s first artificial satellite, called Sputnik 1, my grandfather’s engineering degree was suddenly in demand. He found work with the city of San Francisco engineering streetlights.

As I reflect on my mother’s years as a war refugee and the outcome of my family’s long journey, I feel profound gratitude that I still have her. That if I dial her home in Arizona, she’s still there to answer my call, even if I can’t fly to her now. That even if she has a child’s fuzzy memory of dates and events, she can still remember stories. (Meet the forgotten 'wolf children' of WWII.)

I often return in my thinking to one of my mother’s earliest memories—of the Nazi boy in Kiev passing scraps of salami to her—and how, years later, after a dramatic reversal of fortune, she would be the one offering food to a hungry soul. But not scraps.

At the end of the war, during her family’s brief stay in Dingolfing, they had moved into a part of town where, my mother says, German residents had been pushed out in order to house refugees. Her family was assigned a first-floor room in a furnished home with a piano.

One day a German came to her door, an older woman begging for food from the foreigners in her own country. “By then we were supported by the American forces, and we had some cans of food and bread,” my mother says. “I gave her all of it.”

Before leaving, the woman sat at the piano and played a classical piece, says my mom, searching for the right words to describe how she touched the keys. “Sadly…with love.”