Mistaken for an intruder, a determined defender of Brazil’s Indigenous groups is killed in an arrow attack by isolated nomads.

The death of Rieli Franciscato, a veteran Brazilian Indigenous rights defender, at the hands of an isolated tribe has shaken colleagues who fear the incident could have wide-ranging implications for the protection of vulnerable tribal populations.

Franciscato, 56, was killed on September 9 when an arrow struck him in the chest as he followed members of the tribe known as the “isolated group of Cautário” into the forest. He had hastily organized a small team of scouts and police officers in an effort to defuse a potential conflict between the Cautário nomads and rural settlers in the western state of Rondônia.

A veteran field agent of the Indigenous affairs agency FUNAI, Franciscato was viewed as one of the most experienced and committed defenders of so-called “uncontacted tribes” living in extreme isolation in the Amazon rainforest.

That a staunch defender of Indigenous tribes ended up killed by the very people he had dedicated his life to protect was a tragic irony not lost on rights advocates. Indigenous leaders expressed fear the FUNAI leadership, stacked with appointees of President Jair Bolsonaro, will replace Franciscato with someone willing to force contact on the tribe, in contravention of the country’s constitution and long-standing policy.

“The isolated groups of Rondônia may have lost the only guarantor who protected their territories and even their physical integrity,” says Beto Marubo, an Indigenous leader from the Javari Valley in far-western Brazil that is home to the largest number of isolated tribes in the Amazon. 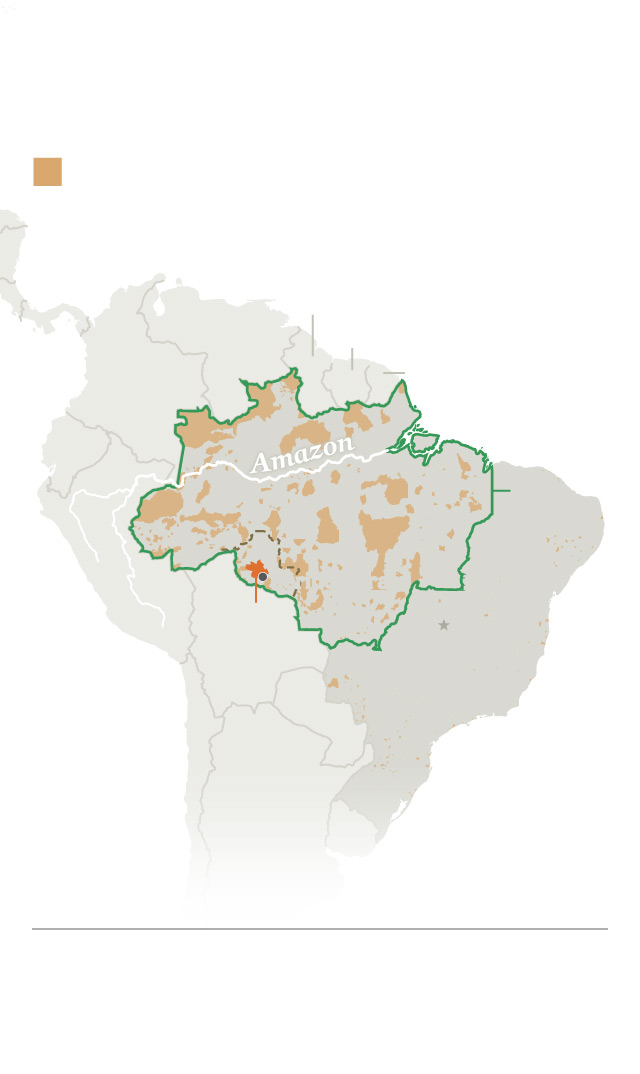 SOURCES: Brazilian Institute of Geography and Statistics, Monitoring of the Andean Amazon Project

The Cautário nomads are named for a river basin they inhabit within the sprawling Uru-Eu-Wau-Wau Indigenous Territory. Franciscato, who had worked with Indigenous people in the region for more than two decades, told researchers last year that he believed the tribe numbered about 300. From painstaking analysis of tracks, abandoned camps, and other artifacts, Franciscato surmised that the Cautário tribe consisted of four nomadic groups, unseen by outsiders, that came together on occasion in the forest. No one knows what language they speak or what they call themselves. Experts say the nomads would have had little chance to distinguish friend from foe as Franciscato followed their footprints into the jungle last week.

“Every sertanista knows that to protect the isolated Indigenous people, we are inserting ourselves between the advancing frontier and the isolated groups themselves,” says retired FUNAI agent Antenor Vaz, referring to the uniquely Brazilian profession of activist-explorers who monitor and defend the highly vulnerable isolated tribes. “In moments of tension, when the isolados feel threatened, it’s difficult to perceive who is ally and who is enemy.”

Tensions have been running high in central Rondônia in recent months. Invasions of Indigenous territories across the state by ranchers, miners, and loggers are on the rise, and local rights advocates say fires set by farmers to clear land have engulfed swaths of rainforest. Forest fires have been reported in the area where the Cautário nomads roam.

In June, a handful of the nomads entered the outskirts of Seringueiras, a town on the edge of the Uru-Eu-Wau-Wau reserve, triggering panic among farmers. They took a number of household goods, including an ax and a chicken, and left behind chunks of wild meat, evidently as payment. At the time, Franciscato and others feared the tribe could have contracted deadly coronavirus during their foray into Seringueiras.

According to the Articulation of Indigenous Peoples of Brazil, the country’s largest federation of tribal organizations, nearly 800 Indigenous people have died from COVID-19 and more than 31,000 tribal people have been infected, affecting 158 communities. So far, no infections have been reported among the tribes living in the Uru-Eu-Wau-Wau Indigenous Territory. (Brazil's Supreme Court is forcing the government to protect Indigenous people during the pandemic.)

Vaz says that Franciscato confided to him shortly after the nomads’ June visit to Seringueiras that Ricardo Lopes Dias, the Bolsonaro-appointed general coordinator of FUNAI’s Department of Isolated and Recently Contacted Indians, had instructed him by phone to make preparations to contact the Cautário group. Dias is a former missionary with New Tribes Mission, which seeks to contact and evangelize isolated tribes. Rights advocates suspect that Dias may harbor an agenda to make contact with Brazil’s last remaining nomadic groups. Vaz says that Franciscato, fearing reprisal if he went public with Dias's request, asked him to keep details of the phone call to himself.

In an email to National Geographic, FUNAI denied the allegation, saying “there was no recommendation for…Rieli Franciscato to seek contact with the isolated Indigenous people of the region.” What the pair did discuss, according to the statement, was “the possibility of a natural and peaceful contact, without intentionality on the part of FUNAI.”

When the nomads returned to Seringueiras last week, Franciscato gathered his small team and set out to calm settlers’ nerves and investigate possible reasons for the nomads’ return visit to the community.

It’s not known what provoked the nomads, but experts who have worked in the area say that shooting an arrow with intent to kill seems strangely out of character for the normally pacific group.

“Something must have happened … an attack against them of some kind,” says Ivaneide Bandeira Cardozo, project coordinator for Kanindé Ethno-Environmental Defense Association, a Rondônia-based rights group she co-founded with Franciscato in the 1980s. “Certainly, there was something that frightened them and left them feeling threatened.”

In a dramatic recounting of the incident in a WhatsApp voice memo, a police officer who accompanied Franciscato described how the veteran agent followed the footprints of the tribespeople back across the boundary of Indigenous land and into the forest. They had gone just 30 yards or so when Franciscato ascended a small hill to reach a better vantage point.

“We just heard the sound of the arrow as it struck his chest,” the policeman said. “He let out a gasp—oi! He pulled out the arrow and came running back. He got about 50 or 60 yards and collapsed, practically dead.” He died before the party reached the hospital in town. In the dense forest, no one was able to see who shot the arrow.

‘Who will it be tomorrow?’

Former colleagues blame the tragedy on the anti-Indigenous rhetoric and policies of President Bolsonaro. “He’s dismantling FUNAI, violating the constitution, and creating dramatic situations like that of Rieli,” says Sydney Possuelo, founder and former head of the isolated Indians department, which by statute exists to protect isolated tribes from forced contact by outsiders. In the process, the government has hollowed out FUNAI, according to Possuelo, “leaving a crippled institution that is prejudicial to Indigneous peoples, be they isolated or not.”

But Antenor Vaz, Franciscato's one-time boss who now consults on isolated tribes, says FUNAI’s leadership has starved field operations of resources across the Amazon, endangering the overworked crews that still cling to the mission of protecting the isolated tribes. (Indigenous protectors must also brave danger from illegal loggers.)

They’re putting the protectors of vulnerable groups such as the Cautário nomads “in imminent risk of death,” Vaz says. “Today it was Rieli who left us. Who will it be tomorrow?”

In FUNAI’s note to National Geographic, the agency blamed earlier administrations for shortages in personnel. “The gap in FUNAI's staff is the fault of previous governments,” the statement says. “Current management is working to change this reality—better equipping the bases, hiring functionaries, collaborators, and Indigenous assistants.”

FUNAI’s statement went on to praise Franciscato, noting his “deep knowledge of the region and the isolated population—the result of years of selfless and highly efficient service. He was irreplaceable.” Nevertheless, the process is underway, FUNAI says, "to find someone who can continue the exemplary work carried out by Rieli.”

On an undated video distributed on social media by his friends, Franciscato appears on camera in the middle of the jungle, evidently answering a question about his hopes for the future. "The Brazil I want will be like this here, preserved for years to come, not only for the Indigenous people but for everyone."