How the Nagorno-Karabakh conflict has been shaped by past empires

A fateful decision by Stalin, and divisions drawn by the Soviet Union, still reverberate in a historic conflict that has recently re-erupted on the battlefields of the Caucasus.

When fierce fighting erupted in late September in and around Nagorno-Karabakh, a mountainous region of the South Caucasus, it fanned the flames of a centuries-old dispute. The clash is the latest in a series of tumultuous battles over who can claim the disputed enclave, a question shaped in modern times by the rise and fall of the Soviet Union.

Officially, the 1,700-square-mile territory is part of Azerbaijan and is known by its Russian name, which translates to “mountainous Karabakh.” But to Armenians and the Armenian-majority population of the region, it’s known as the Nagorno-Karabakh Republic, a de facto independent state that has been outside of Azeri rule since 1988.

borders have long been

South of the Caucasus Mountains

between Asia and Europe lies an area

rife with historic disputes. Most of the

world knows the Russian name for the

region is part of

with outside support from Russia;

How National Geographic Maps It

Nagorno-Karabakh has had different boundaries

in different eras, including an autonomous oblast

within Azerbaijan while under Soviet rule. After

the dissolution of the Soviet Union, Azerbaijani

and Armenian forces fought for control of the

territory, which is mostly inhabited by ethnic

the area controlled by Armenians (shown in gray)

from the rest of Azerbaijan.

How Armenia Sees It

Ethnic Armenians controlling the area have

Republic, which extends beyond the actual line of

control in three areas. This self-declared republic is

How Azerbaijan Sees It

Azerbaijan maintains their sovereign claim to

SOURCE: Atlas of the Nagorno-Karabagh Republic 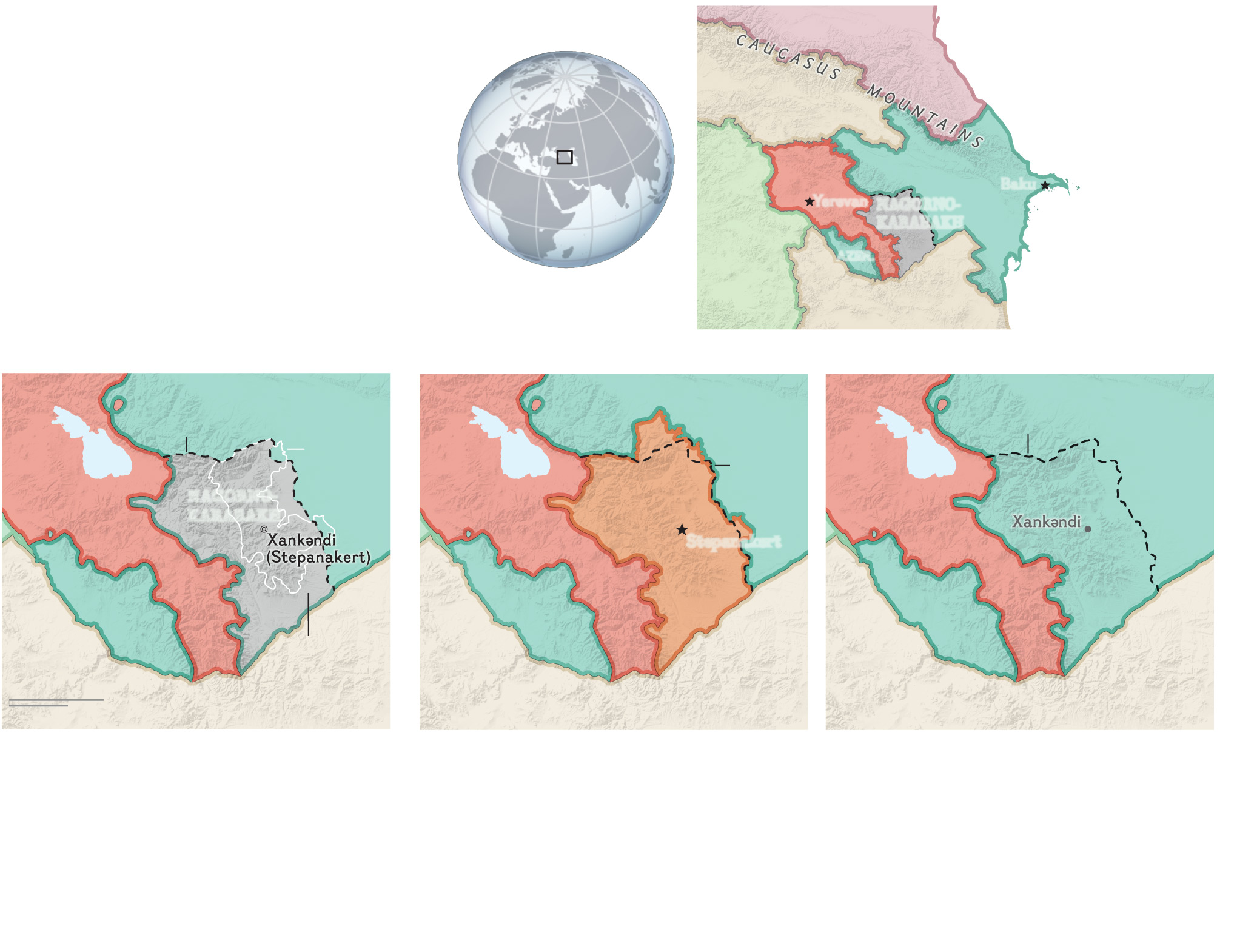 long been in dispute

South of the Caucasus Mountains between

Asia and Europe lies an area rife with historic

disputes. Most of the world knows the Russian

name for the region, which means “mountainous

Today, the region is part of Azerbaijan. But since

1988, it has been controlled by Armenia, with

outside support from Russia; Turkey supports

How Azerbaijan sees it

How National Geographic maps it

How Armenia sees it

Azerbaijan maintains their sovereign claim to

Nagorno-Karabakh has had different boundaries

in different eras, including an autonomous oblast

within Azerbaijan while under Soviet rule. After

the dissolution of the Soviet Union, Azerbaijani

and Armenian forces fought for control of the

territory, which is mostly inhabited by ethnic

the area controlled by Armenians (shown in gray)

from the rest of Azerbaijan.

Ethnic Armenians controlling the area have

Republic, which extends beyond the actual line of

control in three areas. This self-declared republic is

SOURCE: Atlas of the Nagorno-Karabagh Republic

For centuries, Muslim Azerbaijanis and Christian Armenians, both of whom call the region home, clashed over who should control it. Russian rule began in 1823, and when the Russian Empire dissolved in 1918, tensions between newly independent Armenia and Azerbaijan reignited. Three years later, Communist-controlled Russia set its sights on the independent states of the Caucasus region and began incorporating them into what would become the Union of Soviet Socialist Republics.

At first, it was decided that Karabakh would be part of the Armenian Soviet Socialist Republic (S.S.R.). Though historians differ on the reasons, the initial incorporation of Karabakh into Armenia is thought to have been a plan to ensure Armenian support of Soviet rule. But the Soviets’ new Commissar of Nationalities, Joseph Stalin, reversed the decision. In 1923 Nagorno-Karabakh became an autonomous administrative region of the Azerbaijan S.S.R., even though 94 percent of its population at the time was ethnic Armenian.

Though ethnic Armenians complained that Azerbaijan restricted their autonomy and claimed Azerbaijan discriminated against them, the Soviet Union was intolerant of ethnic nationalism and ignored a variety of protests against the status quo.

As the Soviet Union disintegrated in the late 1980s, the long-dissatisfied ethnic Armenians of Nagorno-Karabakh petitioned to become part of the Republic of Armenia. Azerbaijan responded by trying to crush the separatists in 1988, and clashes intensified in the region. In 1991, both Azerbaijan and Armenia declared independence from the U.S.S.R., and the regional clashes in Nagorno-Karabakh flared into full-out war.

As a result, more than a million people became refugees, and around 30,000 people, including civilians, were killed. Both sides engaged in ethnic cleansing during the Nagorno-Karabakh War—the Azerbaijanis against ethnic Armenians, and Armenian forces against ethnic Azeris. Despite the brutal humanitarian toll, negotiations between the sides repeatedly broke down.

In 1994, the newly independent nations of Armenia and Azerbaijan signed the Bishkek Protocol, a ceasefire brokered by Russia that left Nagorno-Karabakh in Azerbaijan. But though the fighting ceased, the two sides could not agree on a peace treaty.

For the last two and a half decades, Armenian and Azerbaijani troops have been divided by a contested “line of contact” laid out in the Bishkek Protocol. It has become increasingly militarized over the years, and has been called one of the world’s three most militarized borders. The Council on Foreign Relations says that given the close positioning and limited communication between military forces stationed there, “there is a high risk that inadvertent military action could lead to an escalation in the conflict.”

That’s of even greater importance because of the conflicted nations’ powerful allies. Azerbaijan is supported by NATO member Turkey, while Russia supports Armenia, making the area a potential conflagration zone. While Nagorno-Karabakh is small, the geopolitical stakes are high due to its proximity to strategic oil and gas pipelines, and its location between the powerful regional forces of Russia, Turkey, and Iran.

These nations could be drawn into the conflict and its rising death toll. Iran, which borders Azerbaijan and Armenia and has complicated relationships with both, has weighed in, warning of a “regional war,” complaining of rockets and shells striking inside its territory and placing its own troops near its border.

Can the region overcome centuries of conflict? Only time will tell—and multiple negotiated ceasefires have already been promptly broken. As the world worries about a full-scale Russo-Turkish proxy war, the people of Armenia and Azerbaijan will continue to wrestle with the regional and historic forces that have kept them intertwined, and in conflict, for so long.